Continue to The Hollywood Reporter SKIP AD
You will be redirected back to your article in seconds
Skip to main content
September 18, 2019 1:00pm

The next wave of streaming service launches will push the number of global video subscriptions to nearly 1 billion in the next five years. That’s a remarkable number considering streaming video barely existed a decade ago. But despite the plethora of options, just four platforms — Netflix, Amazon Prime Video, Disney+ and Apple TV+ — will hold nearly half of global subscriptions by 2024, according to my analysis at Digital TV Research.

Though Netflix and Disney+ are often pitted against each other in conversations about the race for subscribers, it’s not those companies that need to worry. Both offerings can and likely will thrive without one snatching subscribers from the other. Netflix is augmenting its current subscriber base in emerging markets whereas Disney will push forward through its global brand recognition and the depth of its content library. It’s the smaller players that will need to change their strategies to compete on a global level.

Disney+, which launches Nov. 12, will have 82 million subscribers around the world by 2024, according to my forecasts. It will concentrate its initial efforts on North America, with a staggered global rollout that will end by September 2021. (Latin America, which was part of Netflix’s early international push, will be one of the last destinations for Disney+.)

The U.S. is the world’s most competitive subscription video market, but it’s Disney’s first target for its direct-to-consumer offering because of the strength of its brand in America. With its $7-per-month pricing, Disney+ is cheaper than Netflix, which charges $13 per month for its most popular plan, and will come stocked with known properties, including animated classics, Marvel titles and the complete Star Wars library, in addition to glossy originals like The Mandalorian.

Already, direct-to-consumer and international chairman Kevin Mayer has deployed several prelaunch marketing techniques to boost early sign-ups, including a promotion offered to devoted Disney enthusiasts at its D23 convention that gave away Disney+ for a $47 annual subscription with a three-year contract. To add further value to the offering, Disney+ will be bundled with Disney’s Hulu and ESPN+ for $13 per month, a $5 discount compared with what it would cost to sign up for each of these platforms separately.

I expect this strong push to give Disney+ 29 million U.S. subscribers within five years, a quarter of all U.S. subscription additions forecast during the period. Internationally, where Hulu and ESPN+ do not operate, Disney will need to rely more on its brand, robust content slate and lower price to attract subscribers. But the global market is becoming increasingly important to a streamer’s long-term ability to succeed, and international subscribers will make up a projected 65 percent of its subscriber base by 2024.

The influx of new competitors like Disney+ — Apple TV+, HBO Max and an NBCUniversal offering also are expected to release new services by mid-2020 — is contributing to the decline in Netflix’s global subscription streaming dominance, but that doesn’t mean the Reed Hastings-led company is not growing. In the next five years, Netflix will add 79 million subscribers, per my forecasts, bringing its total subscriber base to 219 million.

In the U.S., in particular, Netflix is reaching maturity. I estimate that it will add 10 million subscribers by 2024, compared with the nearly 27 million it added during the previous five years. For this reason, international markets — which by 2024 will make up a projected 69 percent of Netflix’s subscriber base — are becoming increasingly important to the global players.

Netflix started operations in 130 additional countries in 2016 to bring its total to 190 territories. Much of its future growth will come from these countries. As a key strategy to drive future growth in those regions, Netflix is producing more of its original content outside the U.S. with a focus on attracting local audiences.

But the biggest growth deterrent for Netflix and others overseas are the countries in which U.S.-based streaming platforms are just not welcome. For instance, none of the global players is expected to gain stand-alone access any time soon in China, which will have 291 million subscribers in five years, making it a larger market than the U.S. Netflix acknowledged this by licensing its original content to local player iQiyi. Russia also is wary of foreign media companies, and Netflix operates there only to a limited extent. HBO, whose content lineup will be part of WarnerMedia’s forthcoming HBO Max service, exclusively licensed its programming to Amediateka there rather than setting up its own platform.

Content will be the distinguishing factor for any platform’s success, both domestically and abroad. And quality content is usually expensive, which might become an issue for services like Amazon Prime Video or Apple TV+ that are not a profit center as much as a tool for customer retention and attraction. I forecast 13 million global Apple TV+ subscribers by 2024 since it is an unknown quantity for many consumers and the tech company does not have a reputation for producing original content.

Meanwhile, I see Amazon Prime Video growing to 127 million global subscribers by 2024; however, only 5 million will pay directly for Prime Video. Amazon’s desire to commit much more on video programming — it spent $6 billion in 2018, compared with Netflix’s $12 billion — will be tested with so few subscribers paying directly for Prime Video, and the gap between its content budget and the budgets of its pure-play video rivals is likely to widen.

As the global streaming market becomes overcrowded, other smaller offerings — including ViacomCBS’ Showtime and CBS All Access — may see patchy growth abroad while making a substantial impact in the U.S. And local international platforms, especially those run by broadcasters, won’t have the scale or financial commitment to succeed. Ultimately, I believe, it’s Netflix and Disney+ that will thrive. 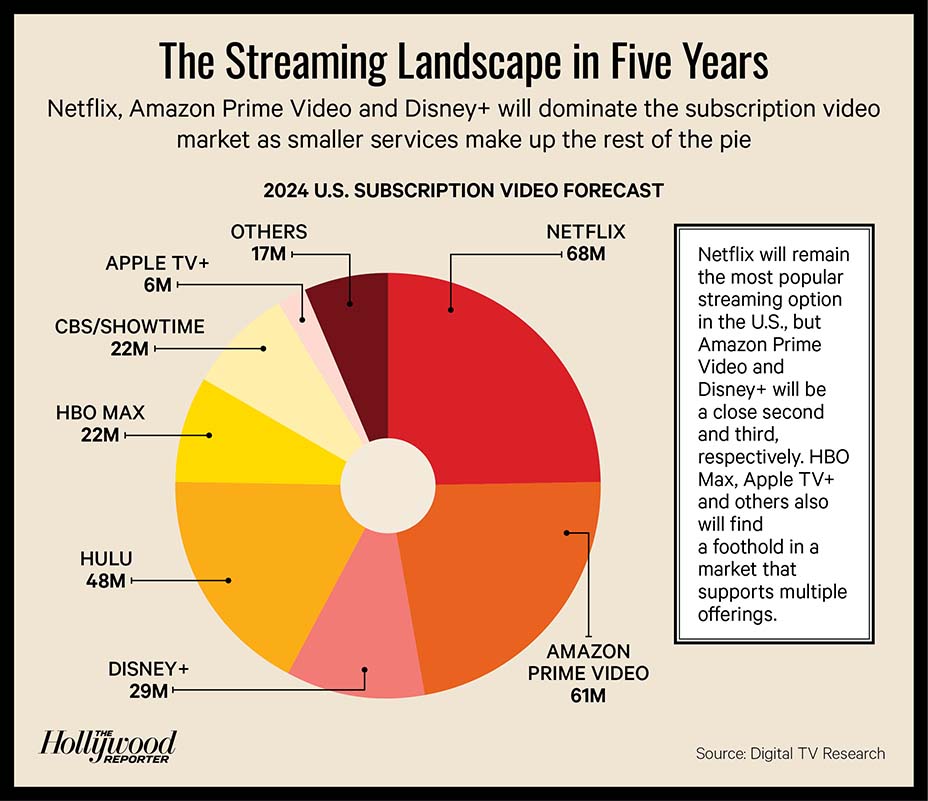 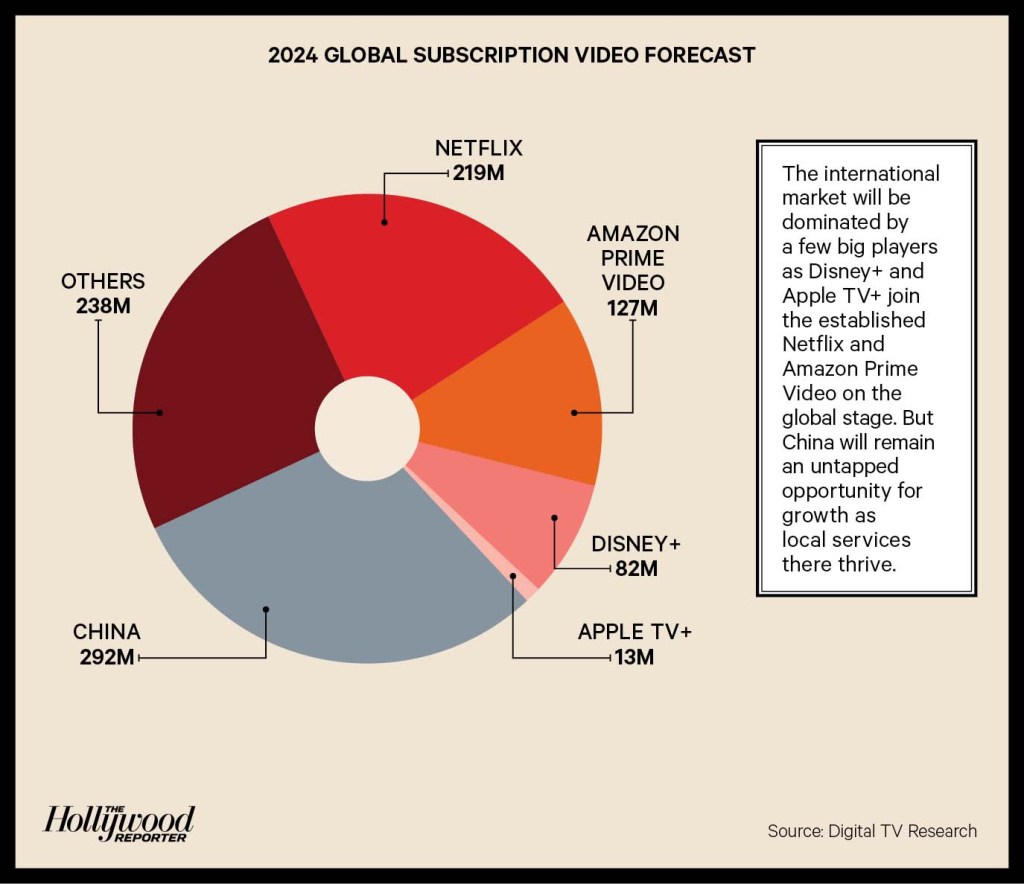 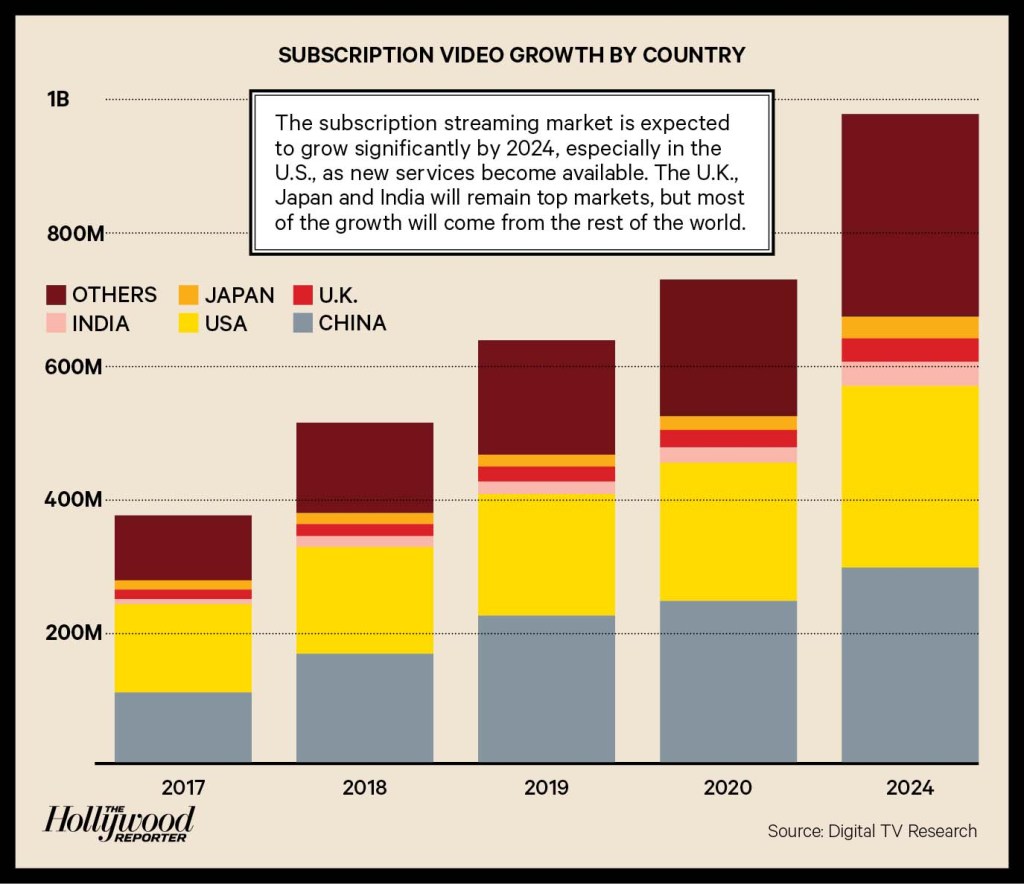 This story first appears in the Sept. 18 issue of The Hollywood Reporter magazine. To receive the magazine, click here to subscribe.