Animation has come a long way since artists painted each frame of Mickey Mouse by hand, and Ron Clements and John Musker have seen that evolution firsthand.

The Disney directing duo is behind some of the studio’s most revered tales, from 1989’s The Little Mermaid and 1992’s Aladdin to 2016’s Moana. They’ll each be feted with Winsor McCay Awards, honoring career achievements, at the Jan. 25 Annie Awards ceremony.

The Little Mermaid was the last Disney feature to use hand-painted cel animation. Would you reflect on the period of transition to computer animation?

JOHN MUSKER Although I loved Toy Story when it came out, I didn’t foresee the wholesale move in feature animation away from hand-drawn and into CG. I still think they are different tools to tell stories. I was glad to see Klaus this year with its beautiful hand-drawn animation, as well as the hybrid I Lost My Body and the stop motion in Missing Link. I would love to see all these forms continue to be seen on the big screen.

RON CLEMENTS I do miss hand-drawn features and hope that there’s a future for this unique and very special kind of animation. I’m encouraged by the fact that there seems to be so much interest and enthusiasm for the medium among young people nowadays. I think people really do miss it, and it’s poised for a potential comeback. 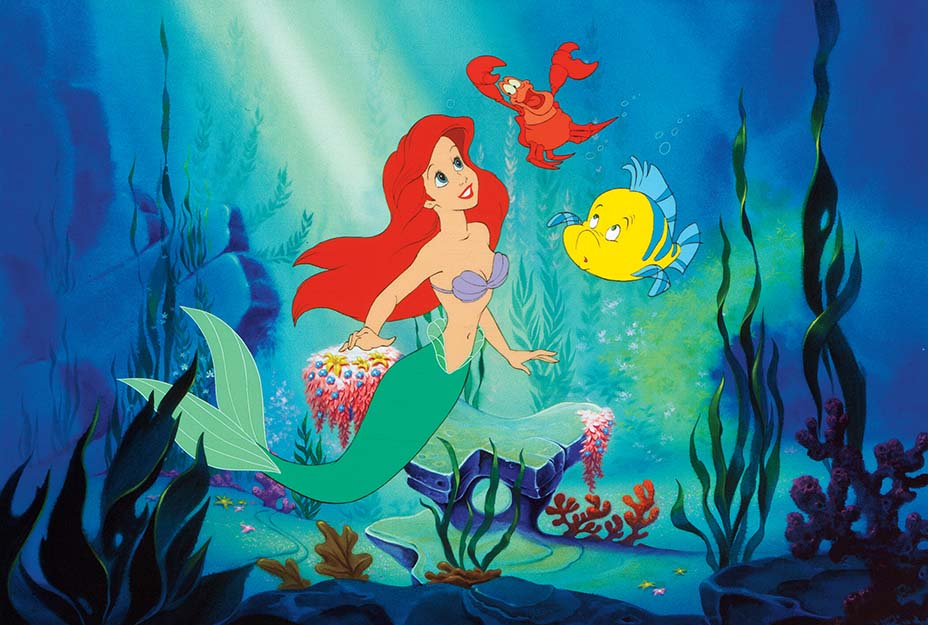 What was it like to develop Aladdin‘s Genie with Robin Williams?

CLEMENTS One of the great joys in all my years at Disney was getting to watch Robin Williams at work on Aladdin. The script was written for him in an improvisational style, and he always started with the script as written. Then he would start embellishing, adding stuff, changing stuff, going faster and faster as he went along. He recorded in four-hour sessions and hardly ever stopped. By the end of each one, it was like he had gone through an intense physical workout, covered in perspiration. He was like a tremendous athlete at the top of his game. Almost everything he did was great, but there were times when he was especially “in the zone” — on another level — and the stuff he was coming up with was jaw-droppingly awesome. He was a marvel to witness.

MUSKER We wrote Aladdin with Robin Williams in mind. … We felt that we could do things with Robin’s brilliant mercurial improvs that live action couldn’t match. Animated and shaped by Eric Goldberg, I think we did just that. Robin was an absolute joy to work with, indefatigable and generous with his time and unique talents. Our world is a little dimmer without Robin.

There’s been a lot of attention on the advancement of animation driven by Jon Favreau’s The Lion King. What are your thoughts on the state of animation and the opportunities to use animation to tell stories going forward? And what about the remakes?

MUSKER I love to see new techniques being explored in animation. I also like the idea that the medium has enough elasticity and potential that there are many types of stories that have yet to be done in animation, and I am hoping in the coming years they will be. I am bemused by the live-action remakes, although the more successful ones to me are the ones ironically that reinterpret the source to a greater degree, like Maleficent. I think Favreau’s a brilliant filmmaker, but the shot-for-shot fealty to the hand-drawn Lion King, as well as the inexpressive animation in his film, left me uninvolved. In general, I would rather see more original content, and fairy tales particularly by their nature don’t seem to accommodate or demand the extension and/or repetition of their self-contained narrative arcs. But Frozen 2 just made more than $1 billion, so what the heck do I know?

Do you have a favorite character?

CLEMENTS Talking about your favorite movies and characters is like talking about your favorite kids. But having said that, I would have to admit that Little Mermaid is very special to me. … John and I were in our early 30s when we started the project, and we were some of the oldest on it. We all knew the stakes were very high. And I’ve always identified with Ariel. I know she’s taken some heat about giving up her legs just to get a guy, but I never saw it as that. Coming from a small city in the Midwest and dreaming of one day going to Hollywood to work for Disney, to me she was like anybody dreaming about being part of a world very different from their own, no matter how impossible that seemed.