Sarah Jessica Parker celebrated her return to television on Tuesday night with both her current Divorce family and her former Sex and the City castmembers.

The 10-episode season of Divorce — which is “a fairly honest and brutal look at an American marriage,” according to the actress — centers on Frances (Parker), a woman who suddenly begins to reassess her life and her marriage, and finds that making a clean break and a fresh start is harder than she thought. Thomas Haden Church (who worked with Parker on the 2008 film Smart People) plays Frances’ husband Robert, and Molly Shannon, Talia Balsam and Tracy Letts play her close friends.

Like Girlfriends’ Guide to Divorce, Younger, The Affair and others, the new HBO dramedy continues the recent trend of spotlighting middle-aged characters who restart their lives. Why the demographic’s onscreen popularity? “The stakes are so high — every decision you make is 10 times more important than it would’ve been in your twenties,” explained Sharon Horgan, who serves as executive producer on Divorce alongside Parker, Paul Simms, Alison Benson and Aaron Kaplan. “Dramatically and comically, it’s more interesting.”

Added Balsam: “People in this particular age group, which you don’t see a lot of on television before now, are going through almost another adolescence when they have something shake up their lives like this.”

Echoed Shannon: “I love seeing a strong female perspective on these subjects. If I wasn’t on it, it’d be on my TiVo.” 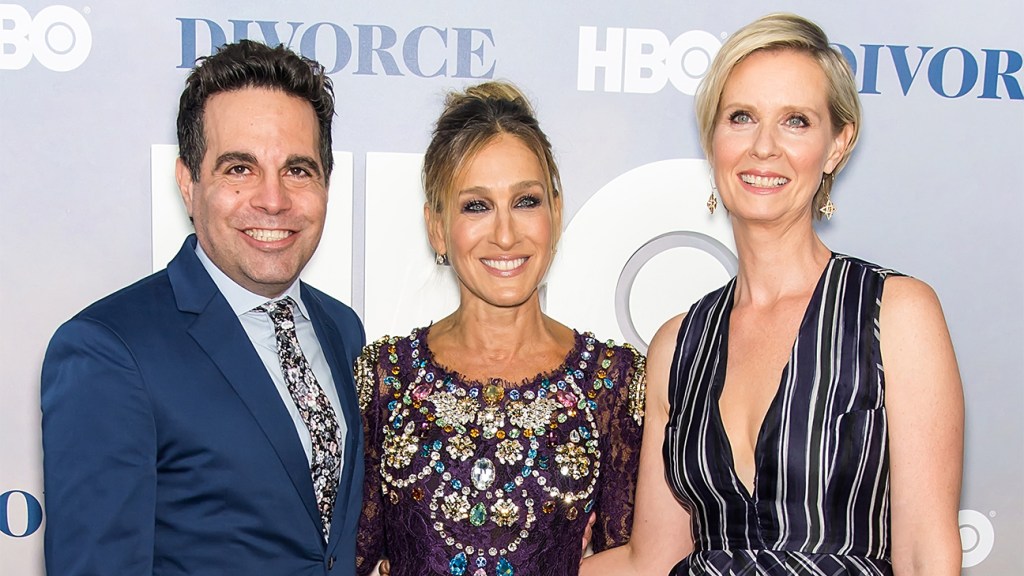 To those HBO viewers expecting to see Carrie Bradshaw onscreen again (and may therefore be disappointed), Parker addressed, “I’ve been an actress for 40 years now, and I’ve always tried to find interesting parts. Carrie Bradshaw was an extraordinary moment — she was written beautifully and I was surrounded by all the right people to tell that story — but this is a different story, and it deserves its own environment and point of view. Frances is flawed, generous, deeply competent and a mess, and is equally as human is Carrie. I think people can love all sorts of different women.”

While walking the blue carpet, Parker gracefully and repeatedly appeased reporters by answering that a third SATC film is in “orbiting” status. “It’d be foolish of me to be sick of that question, or feel bitter or resentful. If it weren’t for Sex and the City, I wouldn’t be here right now. Sex and the City isn’t like a monkey on my back; it’s the professional and personal experience of a lifetime. I wouldn’t change a thing. I’m honored to have to answer the question.”

After screening two episodes of Divorce, former Sex and the City actor Mario Cantone told THR it was “brilliant, dark and funny, with no bullshit.” Cynthia Nixon said, “I thought it was hilarious and devastating, which is a very hard combination to pull off.” Alongside Matthew Broderick, Diane Sawyer, Jerry Seinfeld, Paul Haggis, Dana Delany and others, they then headed to the afterparty at La Sirena, complete with multiple screens playing the night’s vice presidential debate “for those who care about the fate of the Republic,” joked HBO original programming president Casey Bloys.