Forty-eight hours before the Venice Film Festival premiere of Chiara Ferragni – Unposted, the Italian fashion blogger-entrepreneur, the subject of this Amazon Prime documentary, posted. And the emotional tone of her video mirrored many fashion documentaries that have come before, as in this video, the savvy Instagrammer (who has 17.2 million followers) appears mascara-free and weeping uncontrollably.

In the post’s accompanying text, she explains that the crying footage was captured back in April, after she had first viewed Unposted. “Creating this documentary has been the most challenging project I’ve ever taken part into,” explained Ferragni. “Letting someone else, the director @elisamoruso, tell my story and go deep in everything I’ve experienced has been scary but therapeutic. Being able to show you how my business started 10 years ago and that it’s not only about posting a nice selfie was of extreme importance to me.” 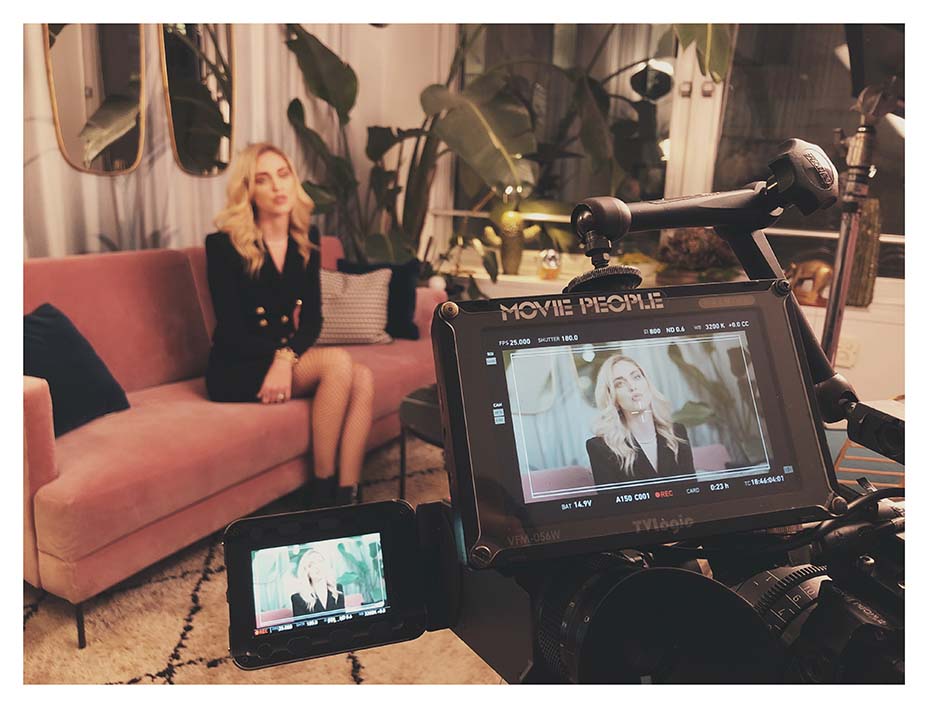 Elisa Amoruso — an award-winning Roman filmmaker and novelist — has crafted an intelligent portrait of the brains behind the Blonde Salad blog. Ferragni became rich and internationally recognized after her successful eponymous clothing and accessories brand was studied by Harvard Business School in 2015 and then, two years later, she ranked first on Forbes annual list of top fashion Influencers. While the Chiara Ferragni Collection brand operates flagships worldwide, Ferragni’s next gig — appearing on Heidi Klum and Tim Gunn’s upcoming Making the Cut Amazon fashion reality show — could transform her into Italy’s answer to Michael Kors.

Meanwhile, Unposted’s editor, Irene Vecchio (with whom Amoruso often collaborates), has spliced together the film’s portrayal of Ferragni as a multitasker. The statuesque blonde appears onscreen to be “having it all” including a thriving business career. “You can do it alone,” asserts Ferragni, ending a sequence addressing the split with Riccardo Pozzoli, her former business partner-boyfriend, which lends some tension to the film.

In September 2018, Ferragni married Federico Lucia (a.k.a. Fedez, the Italian pop-rapper, songwriter and Italian X Factor judge). We discover — in case anybody didn’t already know — that the couple’s lavish Sicilian countryside wedding was more popular online than the royal wedding of Prince Harry and Meghan Markle, Duchess of Sussex. Highlights of the March 2018 birth of the couple’s son, Leone, include Ferragni’s admission that “there was a placenta problem — apparently Leo was not growing enough. It wasn’t a serious problem. But it wasn’t the easiest thing to cope with,” she says, tearing up again. 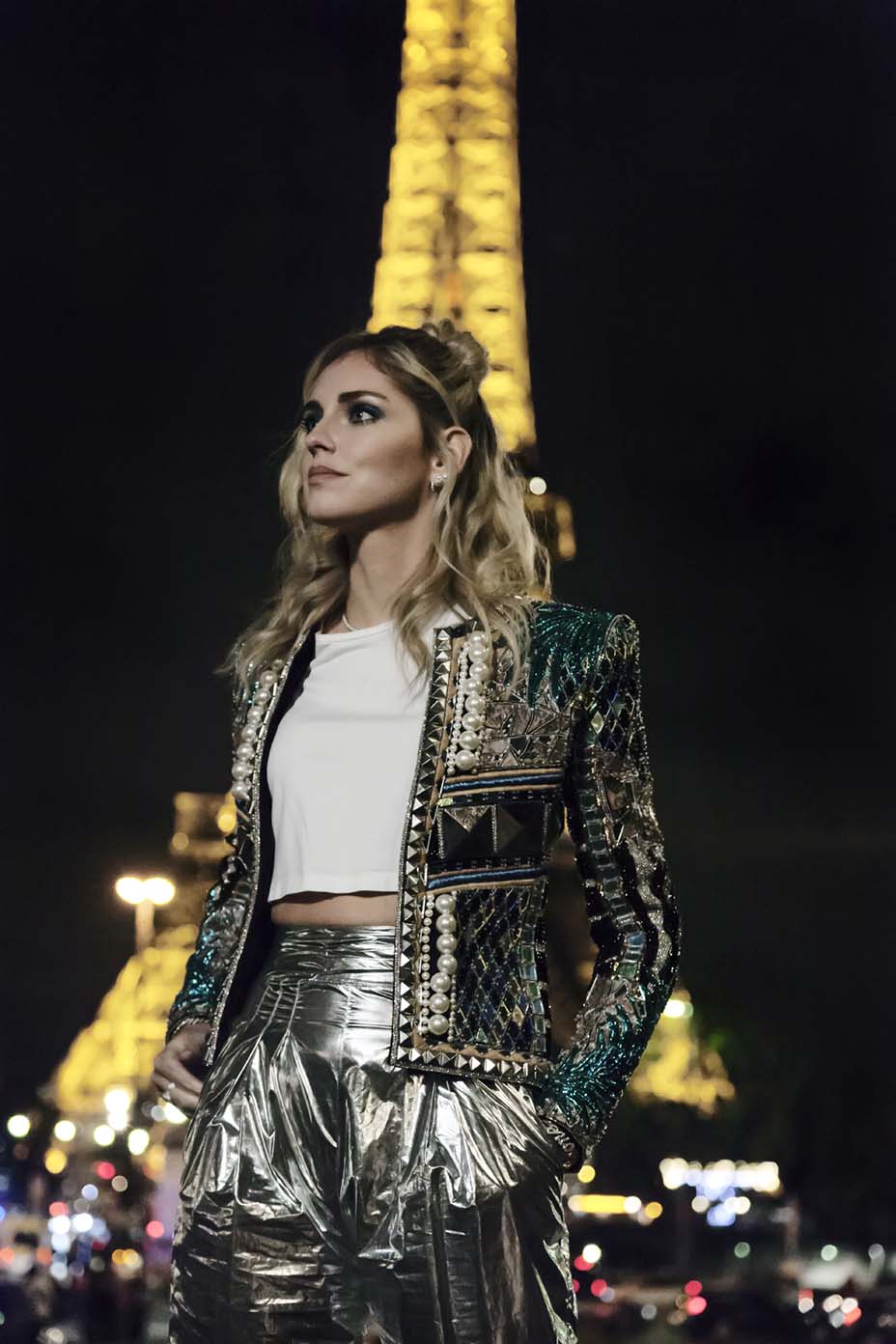 Then follows a lengthy sequence in which the couple discuss plastering Instagram with baby photos. “We have always included him,” Ferragni declares emphatically.

Along the way, the film introduces Candice, a Ferragni fan who is so shaken by a brisk meeting with her idol that she sobs uncontrollably throughout the encounter and fumbles with her phone. “I can do it,” says Ferragni, deftly grasping the phone while balancing her Dior Saddle Bag. As she briskly snaps a few images, Candice pulls it together. 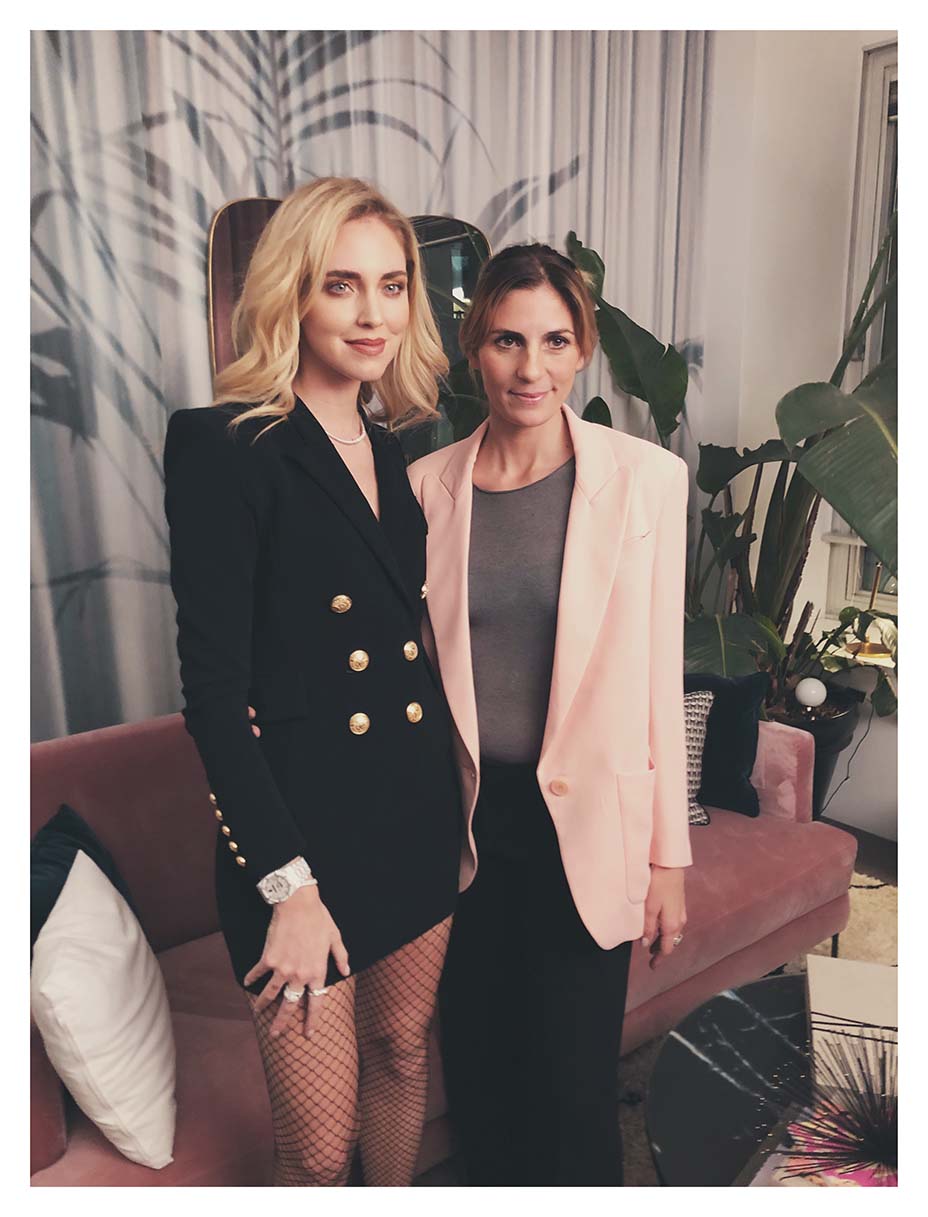 Candice is one among a lineup of 11 Ferragni fans who declare their admiration of her during the film. As do a roll call of fashion’s finest designers — Alberta Ferretti (who designed the bridesmaid gowns for Ferragni’s wedding to Fedez), Lorenzo Serafini, Silvia Venturini Fendi, Christian Dior’s artistic director Maria Grazia Chiuri (maker of Ferragni’s wedding dress), LVMH’s executive director Delphine Arnault and Moschino’s Jeremy Scott. So do a plethora of media movers and shakers, from ForbesWomen publisher Moira Forbes to Instagram’s director of media partnerships Eva Chen, along with YouTube’s fashion and beauty director Derek Blasberg and former W editor Stefano Tonchi.

Top academics — program director at Harvard Business School Sandrine Crener-Ricard and USC’s social media and communication professor David Craig — also weigh in on Ferragni’s success and gloss over social media’s potential negative effects. “Whenever a new media comes along, it can cause huge disruption in society,” explains Craig philosophically. “We don’t know exactly what could happen and, invariably, there are positive and negative things that do occur.”

Francesco Vezzoli, the only artist among the sizable troupe of talking heads, opines: “Chiara Ferragni is the elective daughter of Marina Ambrovi? and Big Brother.” 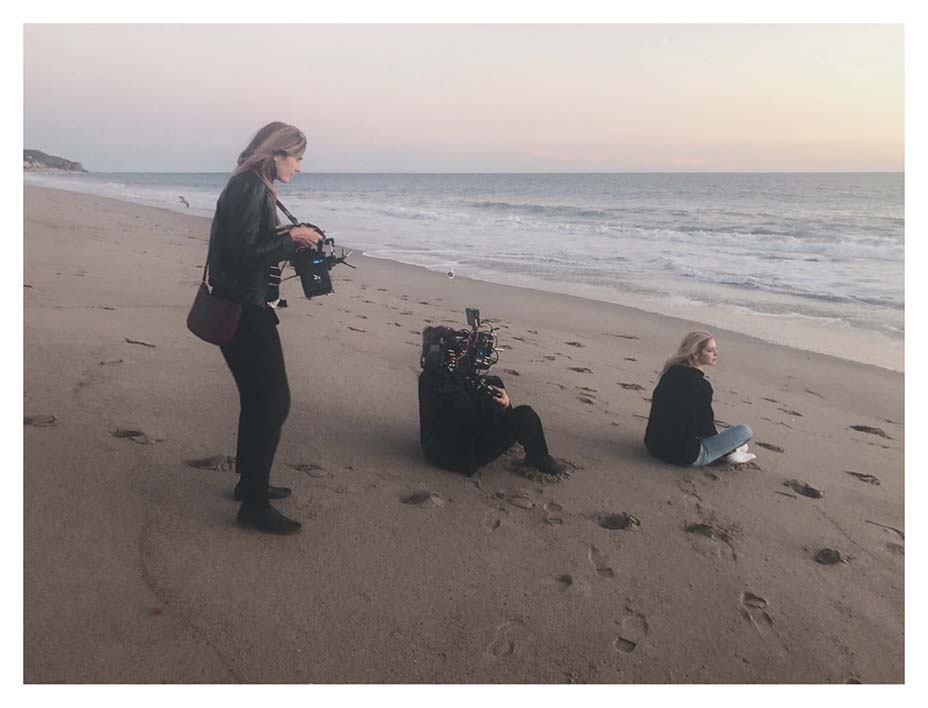 Amoruso just lets that comment hang over dreamy music and moodily lit footage of Ferragni and Fedez embracing poolside, somewhere in Los Angeles. Questioning it might have been a logical move, given that the 73-year-old Serbian performance artist struggled in relative obscurity for 37 years before finally hitting it big with her 2015 Museum of Modern Art retrospective ad performance, “The Artist Is Present.” By contrast, The Blonde Salad blog, which made Ferragni famous, took off quickly after she launched it in 2009. 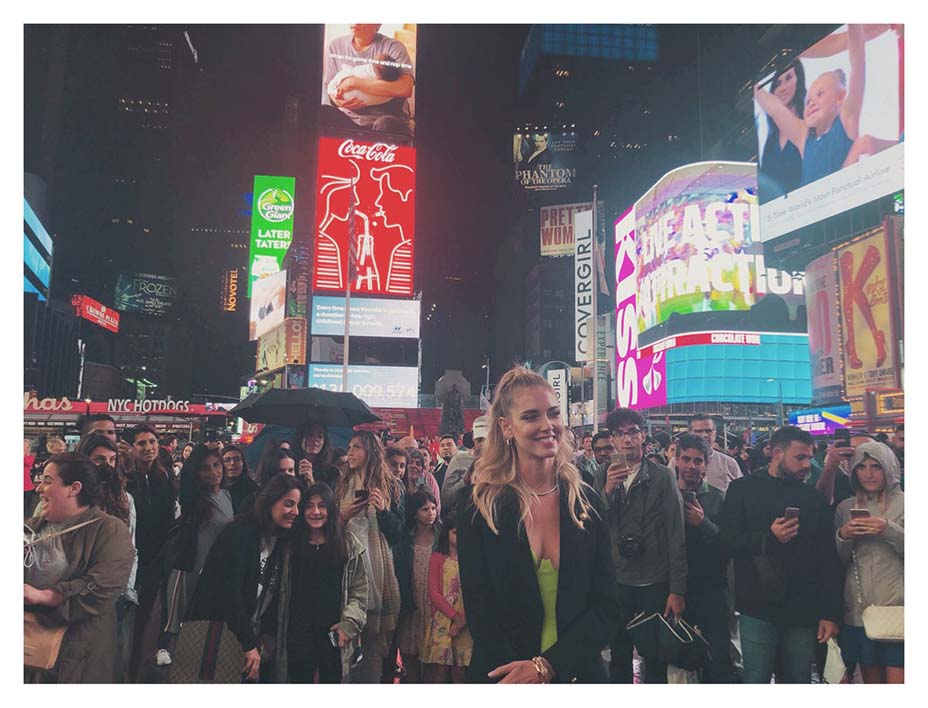 Taking over the story, Ferragni expands on experimenting as a teenager on photo sharing sites like Flickr before an “aha moment” led to The Blonde Salad. Amidst this account, she credits as motivational to her blog an “American girl who took pictures in California,” as well as “someone” who gave her The Blonde Salad’s name.

Ferragni, who is not a sample size, is pictured poolside at Chateau Marmont advocating for size-inclusivity to define her collection. And while Amoruso’s camera follows Ferragni into her closet, it does not linger all that long over her massive wardrobe or speak to where her designer outfits, shoes and handbags go after she’s flashed them for the camera.

It’s worth noting that Unposted’s Venice premiere took place a few weeks after Kering’s CEO Francois-Henri Pinault presented the “Fashion Pact,” a new commitment to “mitigating fashion’s impact on the climate, biodiversity and oceans” at the G7 summit in France last month. And right now, London’s fashion community is celebrating “Second Hand September,” a U.K. campaign by the global poverty charity Oxam and fronted by supermodel Stella Tennant to prompt people to resist buying clothes for a month.

So it feels a bit out of touch to see Ferragni, prepping for Instagram, stripping off sheer plastic protecting a neon Prada top in which she never appears. A few years ago, Ferragni’s endless supply of fashion might have looked enviable but, in current times, it strikes an opposite note. 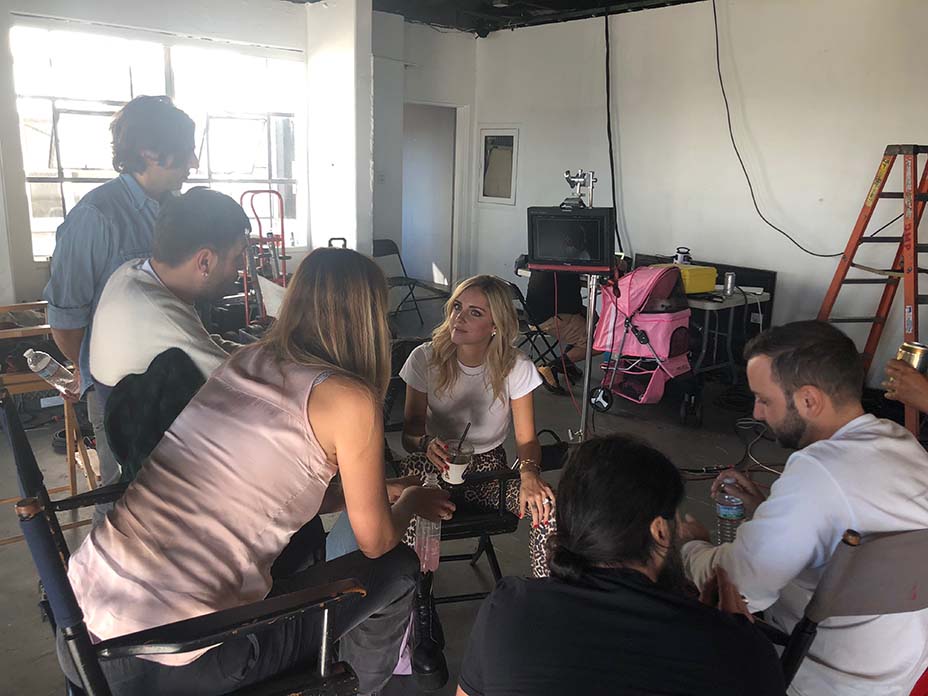