After Jeff Bewkes was made CEO of Time Warner in 2007, he sold off AOL, Time Warner Cable and even corporate namesake Time Inc. to focus the firm’s energies on the creation and distribution of film and TV content (and aggressively position it for an eventual sale to AT&T). Rupert Murdoch, for decades an acquirer, sold most of 21st Century Fox to Disney this year for $71.3 billion to concentrate on live sports and news with Fox Corp.

Now, as ViacomCBS officially forms (expected on Dec. 4), Wall Street analysts and insiders are predicting that controlling shareholder Shari Redstone, CEO Bob Bakish and president and acting CBS CEO Joseph Ianniello are pondering a similar strategy — call it slimming down to scale up.

To be sure, investors are clamoring for something of significance, given shares of both CBS and Viacom have sunk steadily, wiping roughly $10 billion off the combined firm’s market cap since they revealed Aug. 13 that they would merge. Bakish’s pronouncement of a minimum $500 million in cost synergies within two years just isn’t cutting it.

Indeed, there are assets that stick out as divestiture possibilities, such as book publisher Simon & Schuster and Watch! magazine. At CBS, where Simon & Schuster resides, overall revenue rose 6 percent in 2018 to $14.5 billion, but its publishing segment saw a slight decline to $825 million.

“It wouldn’t perhaps be far-fetched to think of the book publishing business as a non-core asset for potential divestiture for ViacomCBS,” says CFRA Research analyst Tuna Amobi, noting that the division “has recently been a drag on CBS’ overall results while also unlikely to play a meaningful strategic role in the direct-to-consumer transition for the combined company.”

Beyond narrowing its focus to growth areas with potential — such as selling content to D-to-C streaming platforms like Netflix and investing in its own services, like CBS All Access — the company could use proceeds of asset sales to pay down its $17.4 billion debt. Divesting for a more narrow focus was already a strategy employed by former CBS CEO Leslie Moonves, who shed the billboard business in 2013 and radio three years later.

Just before he was forced out in September 2018, Moonves even sold CBS Television City in Los Angeles to Hackman Capital Partners for $750 million, and a source tells The Hollywood Reporter that the merged ViacomCBS will review its real estate portfolio, looking to cash in on a strong market. CBS, for example, considered selling its “Black Rock” skyscraper in Midtown Manhattan for $370 million in 2000, though it could fetch four times that today, based on square-foot averages. 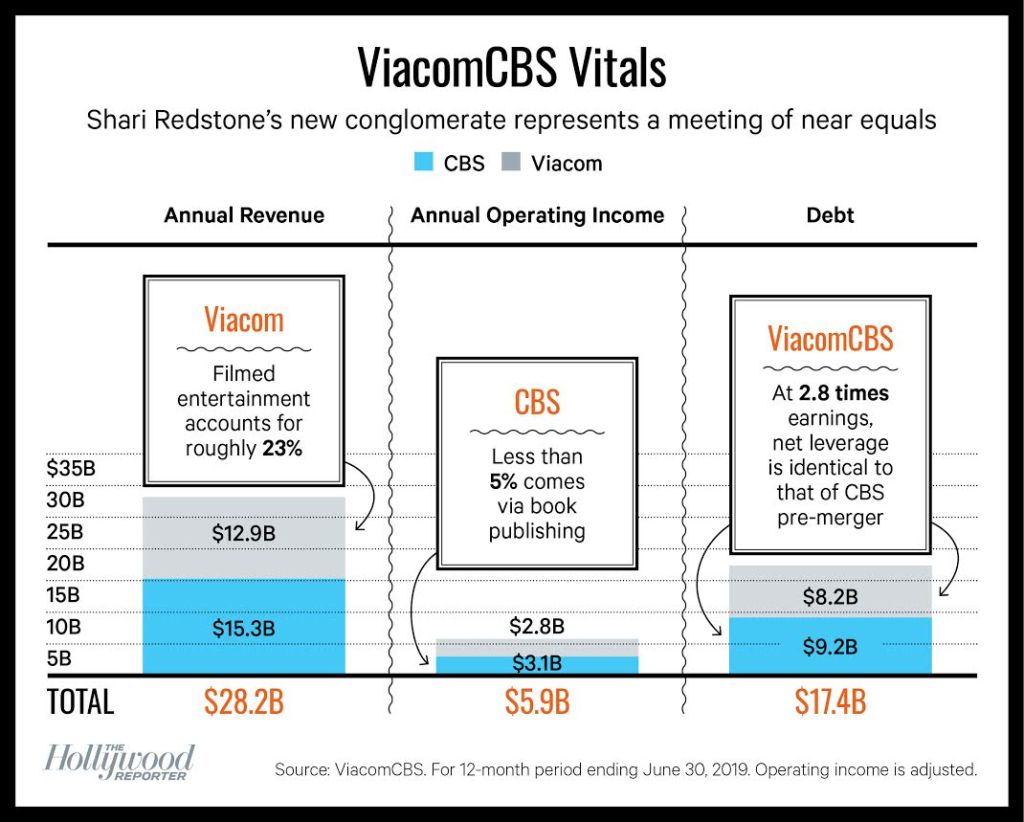 Even Paramount Pictures was in play in 2016, but Viacom couldn’t find a suitable buyer willing to pony up at least $10 billion for a hefty stake in the century-old movie studio. Now that CBS All Access, Showtime OTT and Pluto TV are in need of premium content, a sale of Paramount is unlikely, though some on Wall Street wouldn’t mind if ViacomCBS sold off some slow-moving cable channels, such as MTV and VH1, even though they’ve seen some upticks in Nielsen ratings lately.

While Viacom has suggested that revenue synergies could eventually swell to $1.2 billion for the combined firm, Bernstein analyst Todd Juenger stated in a recent report, “We don’t believe in the theory,” further indicating a need to jettison underperforming assets. This fall, some analysts reduced their near-term growth prospects for ViacomCBS after a regulatory filing indicated that cash flow could fall below expectations amid the merged company’s plans to spend at least $13 billion creating content annually for its various platforms.

“The company’s management (and the new board) should move quickly to help erase the stench of this deal process by selling non-core assets and aggressively cutting costs,” says MoffettNathanson analyst Michael Nathanson. Gimme Credit analyst Dave Novosel echoes, “Speculation is that the combined company may seek to sell non-core assets to reduce leverage.” 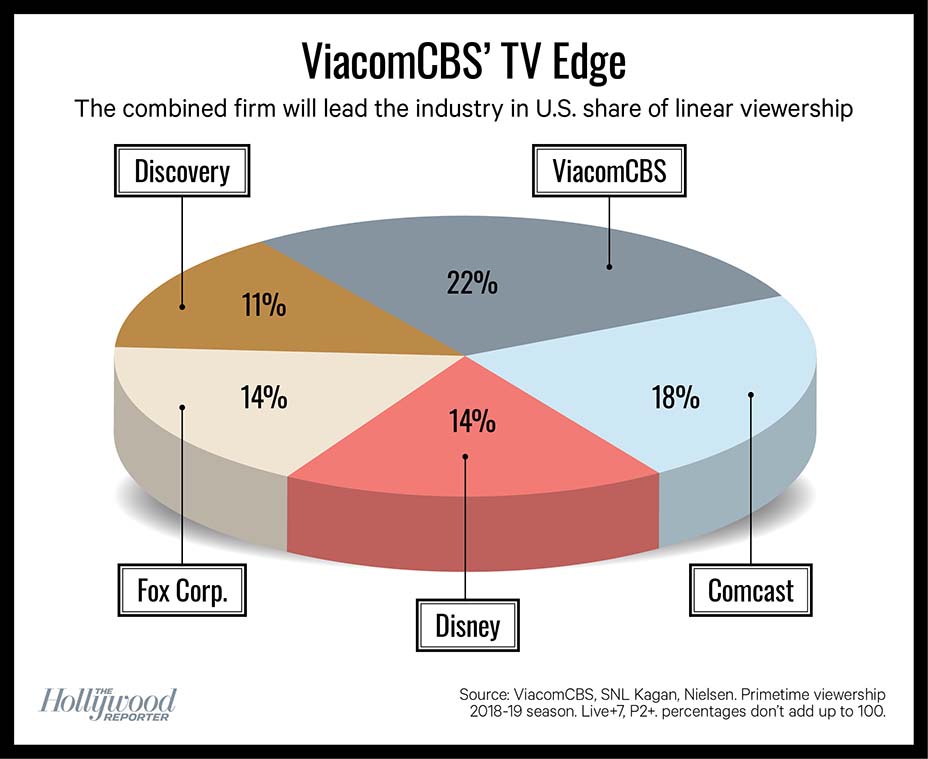 Wall Street watchers have predicted savings will come from such corporate functions as legal, finance, human resources, government relations, communications and technology operations, so employees in those functions are at risk of losing their jobs. At stake are as many as 2,000 jobs, or 9 percent of the ViacomCBS total. Bakish has emphasized that the savings target would not include production and marketing costs amid intense competition for premium content in the streaming era.

On a November earnings conference call, Bakish laid out four key areas of revenue synergy opportunities: distribution, advertising, content licensing and streaming, and he touted a library of 140,000 TV episodes and 3,600 films. “This level of volume is sufficient to supply both our needs and third parties,” he said.

And if ViacomCBS sells assets that don’t fit with Bakish’s four-pronged attack, it could then go on a buying spree. “We will continue to look at opportunities in the marketplace,” Bakish said shortly after the deal was announced. Bankers and analysts speculate that the likes of Lionsgate/Starz and Discovery are future merger partners for ViacomCBS, or it will simply continue to purchase content franchises, as Viacom did in August with a deal for the Garfield property.

After all, Credit Suisse analyst Douglas Mitchelson opined in a report earlier this year: “Even a merged CBS-Viacom is still arguably quite sub-scale compared to the other streaming players.” 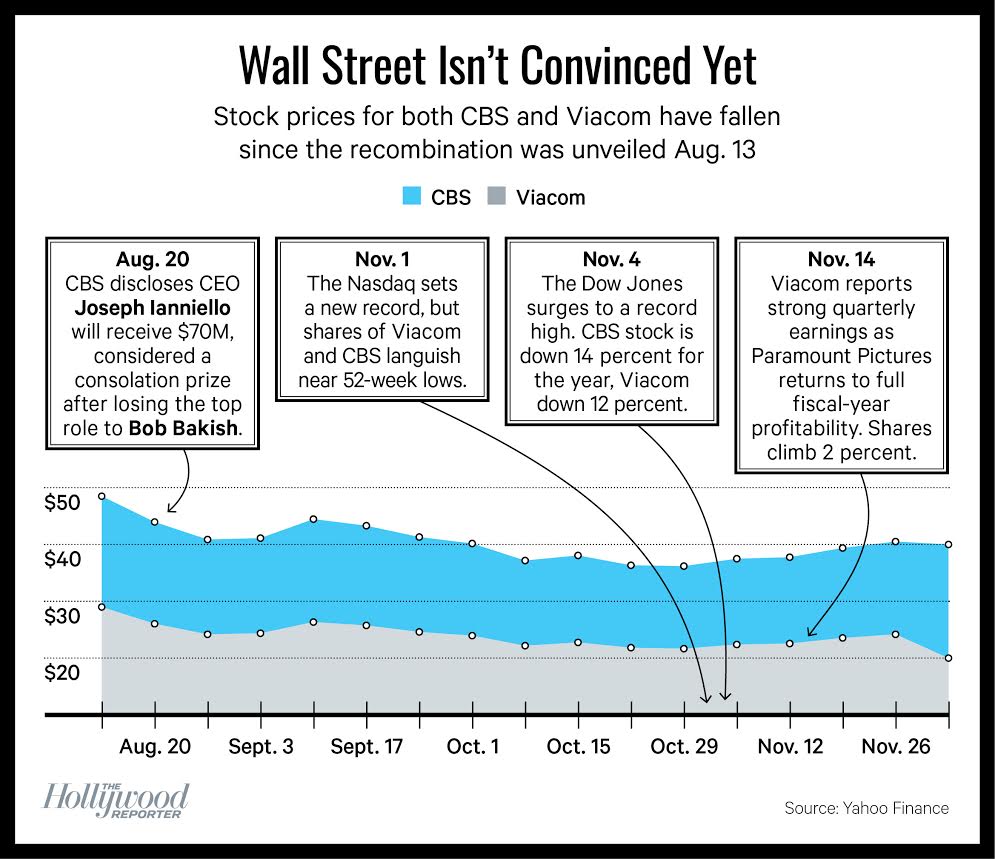 This story appears in the Dec. 4 issue of The Hollywood Reporter magazine. To receive the magazine, click here to subscribe.