West Hollywood needs another workout facility in the same way that Meryl Streep needs another Oscar nomination. But just as you should never discount Meryl, you can’t rule out the Dogpound. The stand-alone trainer’s gym in New York City’s SoHo neighborhood opens its second location this week in Los Angeles, on North Robertson Boulevard above Melrose, right across from the reality television magnet Sur restaurant and lounge.

The East Coast Dogpound, at the intersection of Renwick and Canal, opened in the spring of 2016 and is known for a glittery clientele, which is part of the appeal (and the sweat incentive). On any given day, one might be doing burpees, chest presses and planks right next to Taylor Swift, Gerard Butler, Ryan Seacrest, fashion designer Marc Jacobs, Laura Harrier, Ansel Elgort, Hugh Jackman, director Steve McQueen, Steve Coogan, Shay Mitchell, Cindy Crawford or a bevy of fashion models such as Christy Turlington, Ashley Graham, Adriana Lima, Hailey Baldwin, Jasmine Tookes and Karlie Kloss.

Taylor Swift Delivers NYU Commencement Address: "My Mistakes Led to the Best Things in My Life"

Kirk Myers, the Dogpound’s founder, often walks around the gym barefoot with his toenails painted. (Most recently he has applied Swarovski crystals.) He insists that he did not seek out celebrities; they found him. Years ago, when he was still leasing space at other gyms, Myers began training the hairstylist Marty Harper, helping him to lose 40 pounds. Harper introduced him to Tookes and word of mouth grew as he soon attracted a multitude of Victoria’s Secret Angels. (Myers’ older brother Kip is also a location scout for film and television.) Now the New York gym has a 100-person waiting list, said Myers.

He and his investors decided to open the second gym in West Hollywood “to keep building the brand,” Myers said. “Most of our clients are in film and fashion and they come back and forth.”

Maroon 5’s Adam Levine, one of Myers’ clients and now an investor, said that he learned about the Dogpound via his wife, model Behati Prinsloo, in 2016. “It felt more like a family than a gym,” Levine toldThe Hollywood Reporter by email. “I loved the bare bones old-school approach. No treadmills. Really cool. When I left town, I immediately decided I needed to be a part of it.”

The West Coast Dogpound will be very similar in feeling to its East Coast counterpart. “We didn’t think about changing for Los Angeles, we thought about bringing New York here,” Myers said. (To that end, for the opening-night party, Myers planned to fly half his Dogpound staff and around 20 clients to Los Angeles on a 737 private jet.)

The aesthetic of the place is still like an auto mechanic shop or “an old-school, in-your-garage workout,” said Myers. Architect Michael Kirchmann of GDSNY, added huge garage doors to the high-ceilinged space. When the garage doors are closed, the West Hollywood gym is the same space as the flagship location. When open, the gym is twice the size. And, natch, roughly the same price in rent.

Since many trainers in New York move their clients from inside the gym to outside for tire flips and other exercises, Myers plans to transform an indoor driveway and parking lot into a kind of Renwick Street — a much quieter thoroughfare than Robertson—complete with black turf, graffiti graphics on the wall and a basketball court. The L.A. Dogpound will also have valet parking and rotating art work curated by Vito Schnabel, starting with a 12-foot-wide, black-and-white abstract painting by Texan artist Jeff Elrod.

“The gym looks kind of fancy and we have fancy clients, but we’re authentic to who we are,” said Myers. “We’re chic, but we’re rough.”

He added that he’s not worried about the West Coast competition. “There are enough clients to share and there are a million different ways to work out,” Myers added.

Explained Levine, Los Angeles “is the next obvious choice for this type of gym. It’s full of people who want to be fit. I like how the Dogpound isn’t for the casual gym goer.” 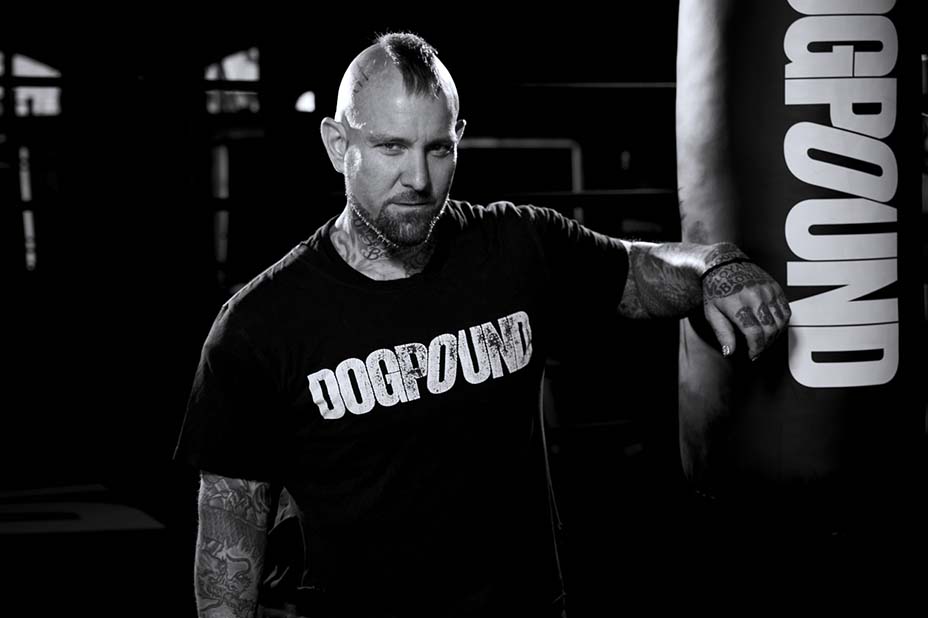