“Pimp on steroids,” is how Oscar-winning costume designer Ruth E. Carter (Black Panther) describes the street-strutting and Kung Fu-fighting accomplished while wearing the patchwork suits, homburg hats, maxi coats and matador pants that mark the ’70s peacock styles of the Netflix dramedy Dolemite Is My Name, out Oct. 4. “Even if people didn’t adopt the practice of pimp or whore, they wanted the coolness of the style,” she says. “I didn’t want the costumes to be a sideshow; I had to make it something that I remembered and was real to life.”

The biopic stars Eddie Murphy as comedian and “Godfather of Rap” Rudy Ray Moore, who created Dolemite, an over-the-top stylized persona who anchored a blaxploitation franchise. Carter looked to Moore’s 1976 second installment, Human Tornado, and such 1970s icons as Shaft star Richard Roundtree for inspiration, referencing Ebony, Esquire and Eleganza magazines “that featured all the innovative styles of the black era — fancy hats with high-waist pants and platform shoes, things you didn’t see in the Sears catalog. It was the epitome of black urban culture. “I also found the ’70s was a time of so many subcultures of hippies, bohemians, and I wanted every individual onscreen look to be authentic to the era,” she says.

Well versed in the period (her credits include Spike Lee’s Crooklyn (1994), What’s Love Got to Do With It (1993) and 2009 parody Black Dynamite), Carter’s first stop was L.A.’s International Silk & Woolens (“It’s been a “part of my journey in costume design for many years”), where she pulled from a warehouse packed floor-to-ceiling with ’70s fabrics. “The ’70s marked an explosion in textiles and a lot of printing on fabrics,” she explains. “It was the hip and popular thing to have all these colors, prints and patterns, and sometimes I felt I went a little too far. It was hard to find the line on a film like this.” 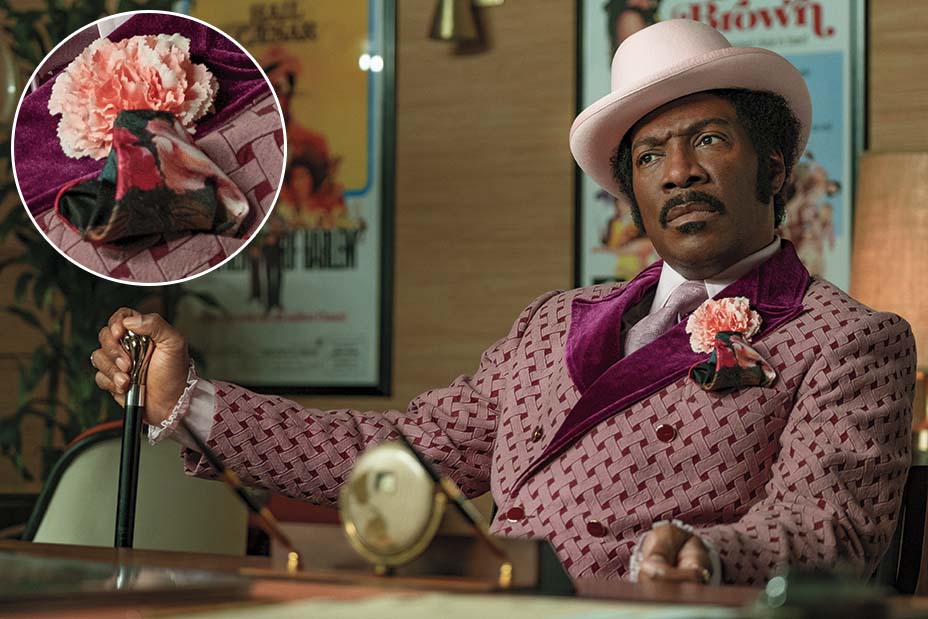 Wardrobing Murphy meant dressing two personas — Rudy Ray Moore, with his own personal flair, and the outlandishly styled Dolemite. “Rudy Ray had hats to match all of his outfits, and the process [had] so many aspects with his canes, chains and jackets,” says Carter. One important detail was his signature rose applique that appeared on all his jackets. “Last year Dolce and Gabbana was doing a rose applique and I thought, if they can do it, so can I.”

While most of the cast were dressed in both rental and custom outfits, “Eddie had 75 costume changes, and every single one, from hats to shirts and suits to shoes, were built, as it was hard to find vintage,” says Carter, who counts Paramount’s upcoming Coming 2 America as her sixth foray with Murphy. “Both Eddie and I knew the ’70s styes well, but he took Dolemite to a new level,” Carter says.

Costumes for Moore’s early days touring the African American comedy clubs on the “Chitlin’ Circuit”; the denim-clad UCLA film students who populate one subplot; and the film’s female standout, Lady Reed (Da’Vine Joy Randolph), totaled some 500 in all. Says Carter, “Lady Reed’s Southern style was a little gritty, a little greasy, a little down-home and a little unapologetic. Lady Reed was like the madam or the boss, and I wanted to bring out the beauty of that woman.” Wesley Snipes, who plays actor D’Urville Martin (aged in the film) sported a mustache and singular custom patchwork denim jacket.

For long wear on set, comfort was designed into Murphy’s platform shoes. “It’s one thing when you are 25 and wearing wood platforms and heavy bell-bottoms, and it’s another when you are on your feet 12 hours a day on a movie set,” says Carter, who ingeniously re-created platform bottoms using a pair of Adidas tennis shoes. “Eddie loved it!”

Toronto: Eddie Murphy Could Charm Audiences and Awards Voters With 'Dolemite Is My Name'

A version of this story first appeared in the Oct. 1 issue of The Hollywood Reporter magazine. To receive the magazine, click here to subscribe.