Not every comic book character gets the chance to have a special day dedicated purely to their heroic deeds — but AHOY Comics’ Dragonflyman is no mere superhero. Indeed, he’s twice the man that other heroes manage to be — literally.

The character debuted in 2018’s The Wrong Earth mini-series, which introduced two versions of the character from alternate Earths — Earth Alpha and Earth Omega, where he’s known as the more fearsome “The Dragonfly” — with both versions subsequently appearing in the 2019 Dragonfly & Dragonflyman series. This June 16, a date that just so happens to coincide with the bookstore release of the collected edition of the latter series, fans are invited to celebrate this most beloved of heroes with the very first Dragonflyman Day.

Entirely unrelated to any celebrations based around similar caped crusaders from other publishers, Dragonflyman Day will see AHOY Comics offer retailers with downloads of promotional posters and social media graphics, with those interested invited to email marketing@comicsahoy.com for more information.

“Not a lot of characters have gotten to celebrate a 91st anniversary. But fan support for Dragonflyman has been consistently strong down through the many, many weeks since his debut,” co-creator Tom Peyer told The Hollywood Reporter, tongue firmly in cheek.

Peter Krause, who illustrated the Dragonfly & Dragonflyman series, shared his own feelings in a similar tone. “When Tom Peyer approached me with the opportunity to draw Dragonfly & Dragonflyman, I wondered if I had the right stuff. The historical weight of these incredible characters is enough to make any artist give pause,” Krause said. “Yet, I accepted the assignment and soldiered on — I hope that my small contribution to this dramatic legacy is seen in a positive light.”

Peyer, more seriously, credited Jamal Igle, who co-created the character and illustrated The Wrong Earth, for much of the success of the hero. Igle, he said, “did a tremendous amount of the heavy lifting when we co-created The Wrong Earth — it was he who came up with the dragonfly association after a trip to Japan, where it symbolizes agility, determination, and victory. And he had entire worlds to create, not just heroes. He’s so immersed in the material that I’m always reminded of [New Teen Titans]-era George Perez, a legendary high water mark of creator engagement.”

Igle added, “When a project comes along that you know just from the verbal pitch, that it’s going to be A, just up your alley and B, too much fun to pass up, you jump at it. Co-creating The Wrong Earth with Tom has been a dream. Tom is such a fantastic, inventive writer and I’ve been a fan of his for years. We’d never crossed paths before we started working together, but our sensibilities and our love of comics weirdness mesh so well. It’s so much fun to read his scripts as a fan, and as an artist the amount of freedom he’s allowed me in terms of crafting the look of the series has been wonderful.”

The artist also teases further adventures featuring both heroes in the future. “There are too many stories to tell with our erstwhile heroes, and the future of Earths Alpha and Omega seem bright — or dim depending on your perspective,” he promised.

In the meantime, fans can look forward to June 16 and the world’s first Dragonflyman Day, offering the world its best opportunity yet to meet its next favorite superhero.

“We urge fans, comic book retailers, and people all around the globe to find their own ways to celebrate this most momentous occasion,” AHOY publisher Hart Seely said in a statement. “Plan a coordinated release of a thousand dragonflies into the sky from the safety of your backyard — or create your own parallel world alter-ego from household items like sponge cake, papier machê, or those pants with the button you’ll never wear again! There’s no limit to the ways you can safely observe this historic day.” 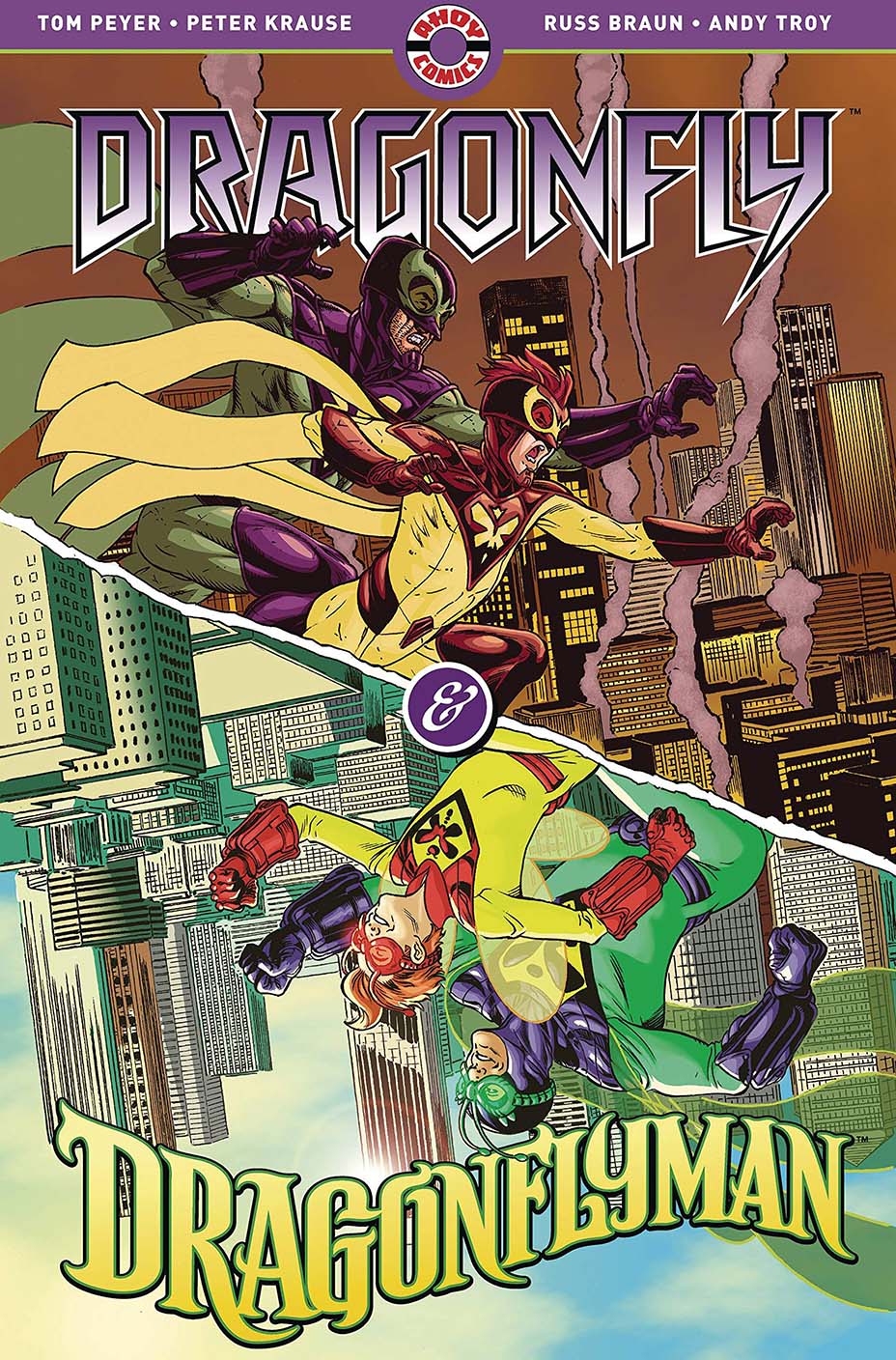 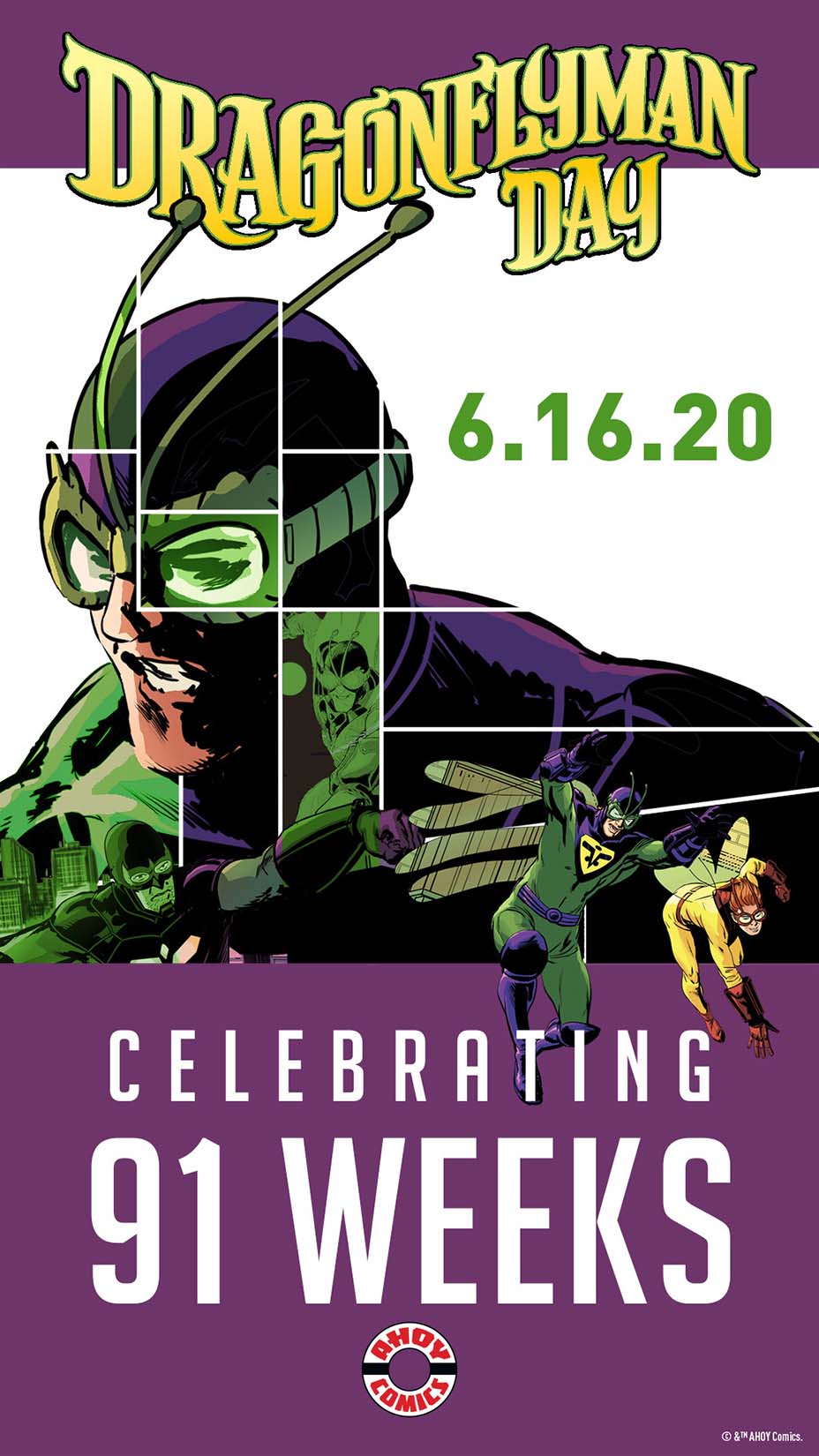