Dreamgirls has been a long time coming to the West End. But 35 years after its Broadway premiere and a decade after Bill Condon’s Oscar-winning movie whetted Brit appetites, the show proves that in the right hands it really is worth waiting for. Director-choreographer Casey Nicholaw’s zestful, spectacularly entertaining and at times overwhelmingly stirring production is irresistible.

It’s easy to imagine that Broadway will get to share in the results. With The Book of Mormon’s Nicholaw at the helm and a solid cast led by Glee discovery Amber Riley — the latest performer to become electrifying in the blessing of a role that is Effie White — a transfer seems extremely likely. After all, aside from a brief return New York engagement in 1987, it’s been more than three decades since Michael Bennett’s legendary original production closed.

In conveying the topsy-turvy rise of three Chicago friends, from backup singers to headliners in the 1960s and ‘70s, Nicholaw and his skilled production team perform a couple of key sleights of hand: they maximize the Savoy Theatre’s narrow, seemingly restrictive stage with such ingenuity and precision that it sometimes feels as if the cast’s energy is being harnessed and literally poured outward into the auditorium; and they marshal that fine-voiced trans-Atlantic company into a near-seamless ensemble that has the audience eating out of its hands.

That’s not to say the production has shaken off the material’s flaws. There’s an interesting coincidence in the show’s timing in London, hot on the heels of the Donmar production of Kemp Powers’ One Night in Miami. In form, these are very different animals of course — one a tight-knit drama, the other a rollicking musical. The common ground is interest in those tensions that arose when black American performers tried to cross over into the so-called mainstream of the white-dominated pop charts.

The correspondence between the two pieces is a reminder of Dreamgirls‘ weak spot, namely Tom Eyen’s book, which doesn’t eke out nearly as much nuance or drama from its theme as it might. Nor is it any more satisfying when dealing with the personal conflicts of the piece, as Curtis’ manipulations turn Effie, Deena Jones (Liisi LaFontaine) and Lorrell Robinson (Ibinabo Jack) against one other.

The thin plotting leaves us to wonder about Effie’s missing years of career ostracism and single motherhood, the social impact of the upgraded Dreams without her and how such an evident heel as Curtis can keep so many people under his spell. Can it be a coincidence that the main driver of the book, Curtis, frequently appears to be accompanied by a weak performance? Reid here rarely registers as more than a two-dimensional shark in a suit. 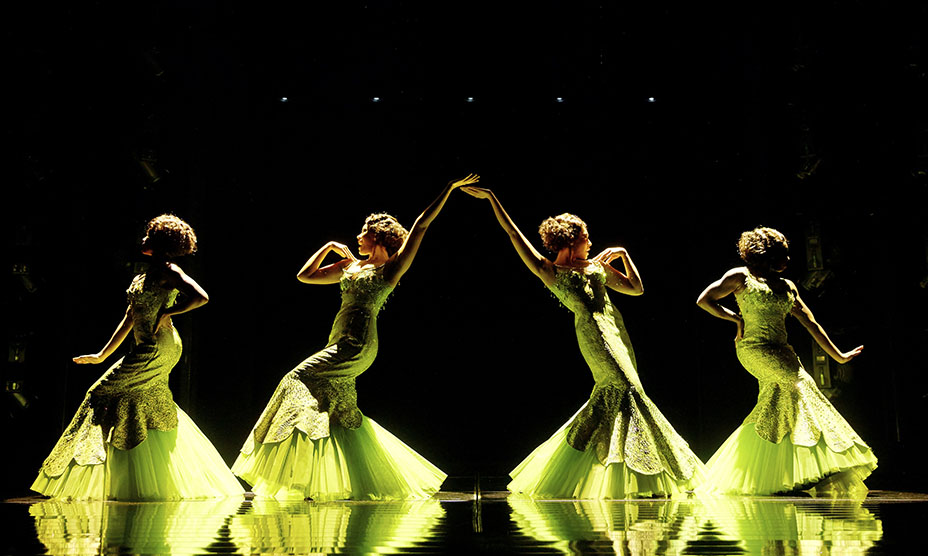 While Nicholaw doesn’t overcome these deficiencies, he does understand that the show’s effect — all of its drama and emotion, as well as its entertainment value — lies in the scintillating songs by Henry Krieger and Eyen. And it’s here that this effervescent production thrives.

The musical hardly ever keeps still, crackling with energy and momentum from one song and dance number to the next. Tim Hatley’s set design appears to borrow from the Bennett model, with four mobile towers of lights, which organize the space as well as providing onstage lighting effects; and while this at first seems a one-note approach, as the show progresses the design reveals more layers and versatility. And with it, Nicholaw orchestrates a series of jaw-dropping transitions — with set, lighting, costumes, hair, the whole shebang changing in a flash before our eyes.

The best example from the first act is a terrific rendering of “Steppin‘ to the Bad Side,” which opens with a West Side Story vibe, the strutting Curtis leading male dancers in a dynamic, macho-posturing routine in an edgy urban setting, before — bang — down comes a glittering scarlet backdrop and the girls appear in beautiful blue dresses, taking over the number. In the second act, there’s an even more dazzling moment as Effie’s performance of “I Am Changing” segues from audition to packed club performance, complete with a miraculous costume change from drab day clothes to a shimmering gown (Gregg Barnes’ wardrobe design is consistently eye-catching).

Yet for all the theatrical gymnastics, when a song needs to dig deep, every ounce of focus turns onto the performer. And there’s no more obvious instance than the musical’s signature song, Effie’s “And I Am Telling You I’m Not Going,” which closes the first act. Up to this point, Riley has been impressing with her voice but struggling to impose her character. That all changes as Effie realizes that having already lost her lead spot and her man to Deena, she’s also lost her place in the group. The song, addressed to Curtis, is a final, angry yet futile show of defiance.

To say that Riley knocks it out of the park would be an understatement; she rips the roof off the building and tears into the sinew of every person in the auditorium. While Reid is on stage with her, he seems to absorb some of the singer’s power as she directs Effie’s rage and vulnerability toward him. But when he exits, Riley turns all that emotion and her full vocal voltage outward. The standard physical response to high drama — the hairs on the back of your neck, welling tears, the tingle in the spine — all seem to happen at once, along with some new ones, bringing the audience to its feet before the first act is quite done. It’s an extraordinary experience.

Until that moment, the first act has been dominated by high jinks, largely centered on the rambunctious Jimmy — James Brown, Chuck Berry and Little Richard rolled into one — before his fall from grace. He’s very appealingly played by Bernard, who is a real find, with a good voice and some serious moves; his lead on “Fake Your Way to the Top” is one of the show’s highlights; though he’s also victim to one of Nicholaw’s few missteps, in failing to convey either the comedy or embarrassment of Jimmy’s first, botched attempt at crossover, “I Want You Baby,” in which the singer can’t quite restrain his howling ebullience. The director also exerts too little pathos in Jimmy’s exit from the story.

But Nicholaw and his female performers do succeed wonderfully in keeping the adrenaline running into the second act. Riley’s performance of “I Am Changing” is gorgeous, and her duet with LaFontaine of “Listen” (interpolated from the movie) creates so much girl-power frisson that the audience is again on its feet.