At one point during his Inspiration Award acceptance speech, Dwayne Johnson choked up, forcing him to pause and say, “I see … it’s going to be one of those kind of nights.”

And it was that kind of evening. A night during which two grown, high-profile men (Johnson and L.A. Mayor Eric Garcetti) chased away tears against the backdrop of an electric fundraiser that pulled in a record-setting $1.65 million for L.A. Family Housing, which helps people transition out of homelessness and poverty through a continuum of housing enriched with supportive services.

Johnson, aka The Rock, who has Warner Bros.’ Rampage opening next weekend, was the last honoree of the night to take the stage. It wasn’t all tears and tough times, however. After accepting his award from a family who had just been rescued from homelessness by Family Housing, Johnson turned to the couple’s son, Joshua, and quipped, “You know what’s really cool, dude? You are so much taller than Kevin Hart. Like way taller. It’s a good thing. He stopped growing when he was 3.”

Johnson then thanked event chair Blair Rich, president of worldwide marketing at Warner Bros. Pictures. The senior executive returned to the event as its chair for an eighth straight year, and was responsible for some of the heavy hitters in the room, including Sue Kroll and Toby Emmerich, among many other agents and executives. “Thank you Blair Rich, for your commitment and your desire to make an impact in peoples’ lives in the work that you do,” Johnson said. “Life is good, we’re lucky. What makes this night special, we are really doing such a cool thing.” 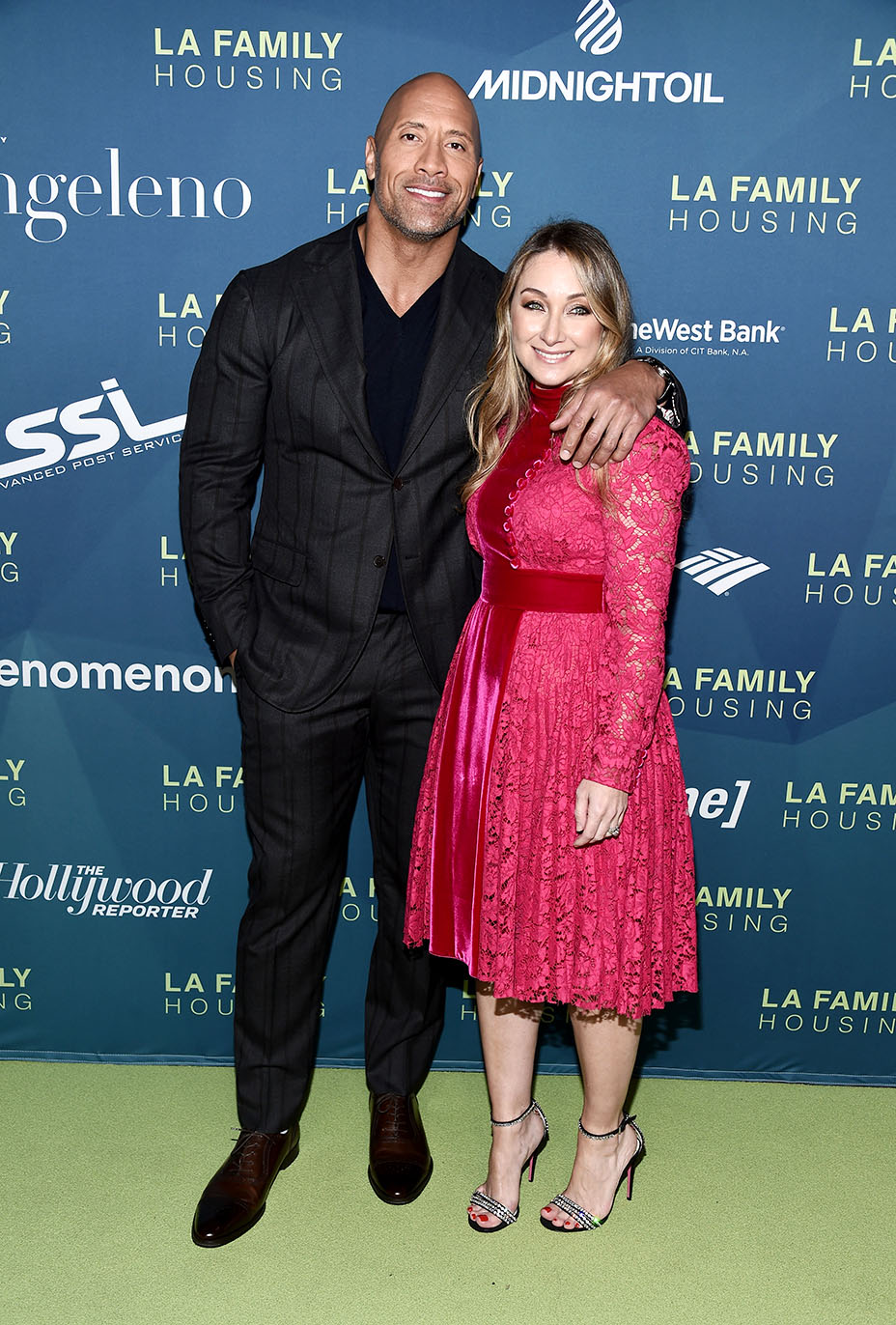 Back to the emotions. “What makes this award special to me — not only because its being presented to me by this beautiful family — is that when I was 14 we were evicted, living in Honolulu, Hawaii. We were evicted and forced off the island and we didn’t have a place to live. I wound up moving to a little motel outside Nashville, Tennessee. It’s a crazy story for another time.”

He did offer a few wild details, including that he used to steal steaks from the local grocery store only to realize that he didn’t have a way to prepare the meat in a motel room. “That’s why this award is really special to me, I know what it’s like not to have the security of a home, and to see your family, my mom crying because of an eviction notice,” he said.

A total of 800 guests took in Johnson’s speech, the largest crowd in the event’s history. Before the program portion  — which featured a live auction, musical entertainment by DJ Kovas and the Kaleidoscope Chamber Orchestra — guests spread out on the grounds for a walking tour of sorts as they checked out various tasting booths featuring goods from some of L.A.’s notable chefs.

Many of them got on their feet for standing events for both Johnson as well as Amy Elaine Wakeland, not to mention Garcetti, who presented his wife with the Sydney M. Irmas Outstanding Humanitarian Award. Straight out of the gate, Garcetti showered his wife with affectionate terms, calling her “an amazing woman, the best first lady this city could ask for and my love” and “the love of my life.”

He then recalled how they first met some 25 years ago on a plane ride from New York to England. Garcetti detailed that he said hello and introduced himself because he was so blown away by her beauty and poise, though “she has no memory of that interaction whatsoever.” He fell further in love with her by watching her selfless activism while they were both students at Oxford. Later, like Johnson, he got choked up when he called her out for the many causes she looks out for, specifically as a savior for “foster children who need a net to catch them.”

“I love this woman and I love the wife and mother she is,” said Garcetti, who paused to catch his breath. “I couldn’t ask for a better partner in the fight against homelessness. Our daughter Maya is here. She embodies why we do the work we do. We won’t want, like all of you in this room, to raise a daughter who thinks that people living in tents is supposed to be normal.” 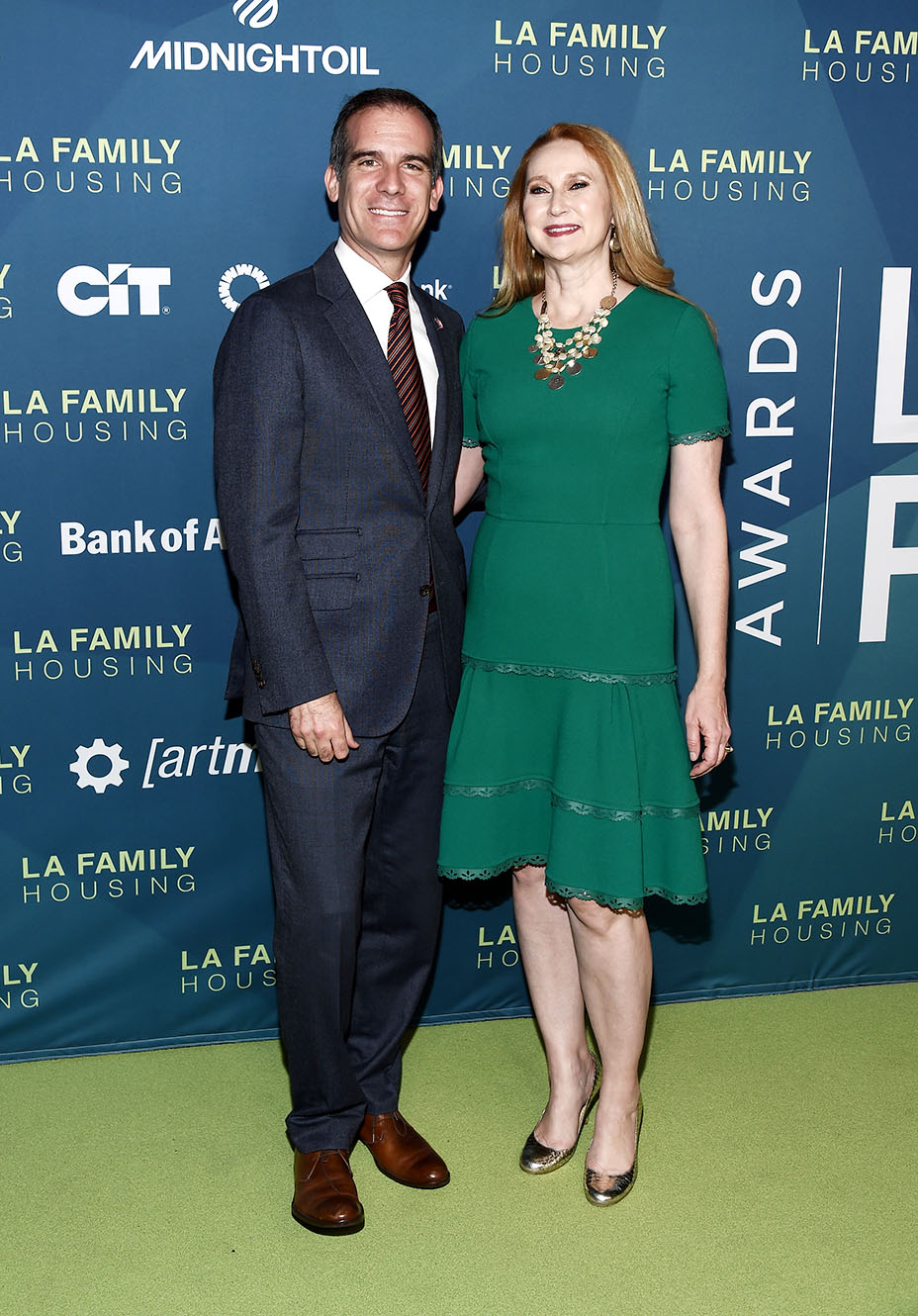 Wakeland then walked to the stage to accept from her husband, thanking him for his kind words, and thanking a young high school student named Precious who also aided in the award presentation. Precious and her family received vital services from Family Housing, which helped ease her anxiety and keep her on track to graduate at the top of her class.

Wakeland praised the nonprofit for serving as a lifeline for people who need help. “This organization permanently changes the lives of so many people caught in the grip of homelessness, and creates an inclusive community, that greets every person who walks in with empathy and words of encouragement and resources they need to get back on their feet,” she said.

She then called the issue of homelessness in Los Angeles the city’s most urgent and moral humanitarian crisis.

“Some people have become jaded about this issue, but I wanted to remind people who may not know this that we have moved 30,000 people off homelessness in the city of Los Angeles, but we still need to address the 30,000 who still remain on the streets,” she said before offering concrete suggestions for how everyone in attendance could help. “[There are] two new ordinances in the works, one which will fast-track supportive housing projects across the city and another that will help hotels and motels quickly convert underused rooms into housing. Call your City Council members and tell them how much you support these ordinances and how you would like these to be passed right now. We need more support with this issue.”

Two more: “If you know someone who is a landlord, I want to encourage you to ask them to start accepting Section 8 vouchers. We don’t have enough landlords in this city who are willing to rent to people who are carrying those vouchers around. And if you belong to a house of worship, you can join the fight by opening up your church or your synagogue and its parking lot to people who can live in their vehicles and need a safe place to park after dark.”

In an interview before the awards presentation, Rich stressed the same level of urgency that Wakeland touched on in her speech. “Fundamentally, I don’t understand why people in our city have to be homeless, and most especially children. I just can’t really live with that fact, and there’s this sort of really tragic myth in our city and in our country that homelessness is an epidemic that’s unsolvable, and it’s actually not true,” she said. “Building permanent affordable housing in our city is more affordable than jails, than hospitals, than all the other things that society spends money on to support itself, and it’s just backwards. And instead, we need to take care of our own. I think the model of L.A. Family Housing in building permanent affordable housing also with supportive services, is really leading the way and is the new way of helping this crisis.”

Rich then said they don’t ask people like Johnson to come to their events just because they are famous faces. “[Dwayne Johnson] struggled with poverty for years. His circumstances are not unlike a lot of the clients we serve, and to give him the Inspiration Award tonight, I mean I think he’s the most inspirational person on the planet, but to give it here as a symbol of how poverty doesn’t have to limit you and what’s possible, is kind of what we’re all about,” said Rich, who also gave special shoutouts to companies like Diageo, which donated all the spirits for the night. Chefs also volunteered their time and food, as did printers, program officials, etc. “More than anyone I’ve ever worked with, Dwayne challenges you in the nicest and most supportive way to be the best that you can be, to work the hardest, to be the most innovative, to push harder. He’s the most inspiring person I’ve ever met. I really mean it.” 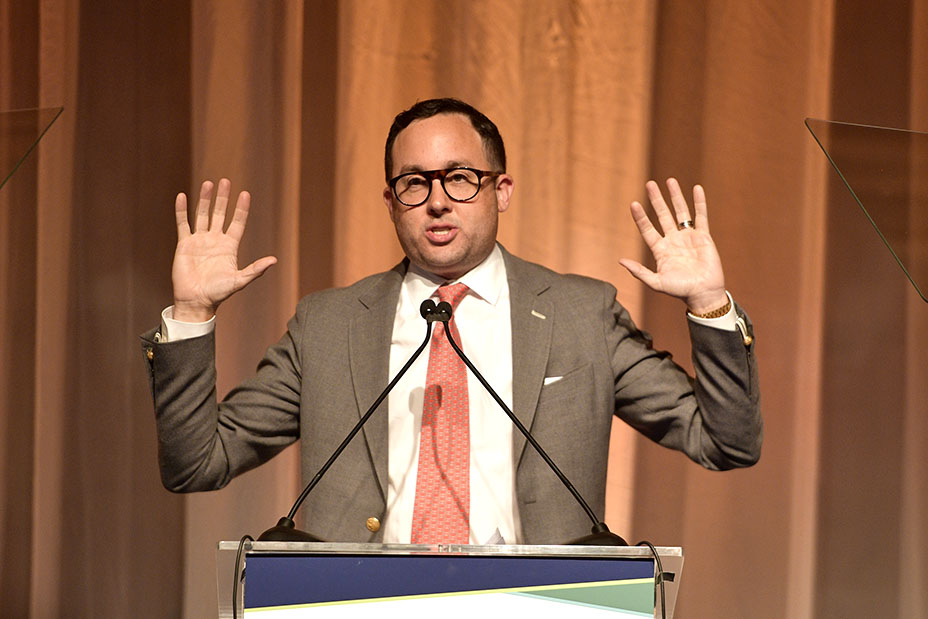 During acceptance speech, @TheRock gets teary, inspires attitude of gratitude and…even works in dig at @KevinHart4real by telling cute kid presenter Joshua that “you know what’s really cool dude? You are so much taller than Kevin Hart. Like WAY taller.” #LAFHAWARDS pic.twitter.com/v29gbpaWuf

While talking about wife Amy Elaine Wakeland’s tireless work w/many causes, @MayorOfLA fights back tears when it comes to acknowledging her focus on helping foster kids: “I love this woman and I love the wife and mother she is.” #LAFHAWARDS pic.twitter.com/2rWwLTLNDc

On serious note, @TheRock acknowledges great work being done to combat homelessness, something he and family members like his grandmother have faced at diff times in their lives. #LAFHAWARDS pic.twitter.com/4LQq2Lz2rm