The Kingsman film franchise is a gift that keeps on giving.

We’re not just talking about delivering on laughs and epic explosions, but products, too. In addition to the clothing line in collaboration with Mr. Porter and costume designer Arianne Phillips,The Kingsman: The Golden Circle, out Sept. 22, is also bringing with it a new, premium liquor.

After director Matthew Vaughn settled on the idea of having a bourbon business as the front for the sequel’s new stateside Statesman spies (led by Agent Champagne, played by Jeff Bridges), it didn’t take long for him to get in touch with the folks at Old Forester, a Kentucky-based brand which has been churning out “America’s first bottled bourbon” since the 1870s.

“[Vaughn] was very purposeful in creating the equivalent of the British tailor shop as an homage to tradition for the second world, the Statesman world,” said Campbell Brown, president of Brown-Forman, which produces Old Forester. “He wanted a similar American type of backdrop for these spies to operate under and he landed on distilleries and bourbon.” He went on to describe a serendipitous conversation between his brother and Vaugn that took place across the pond, where he informed Vaugn of the rich family business which has been going strong for five generations.

“That’s exactly the kind of thing he was looking for,” said Brown. 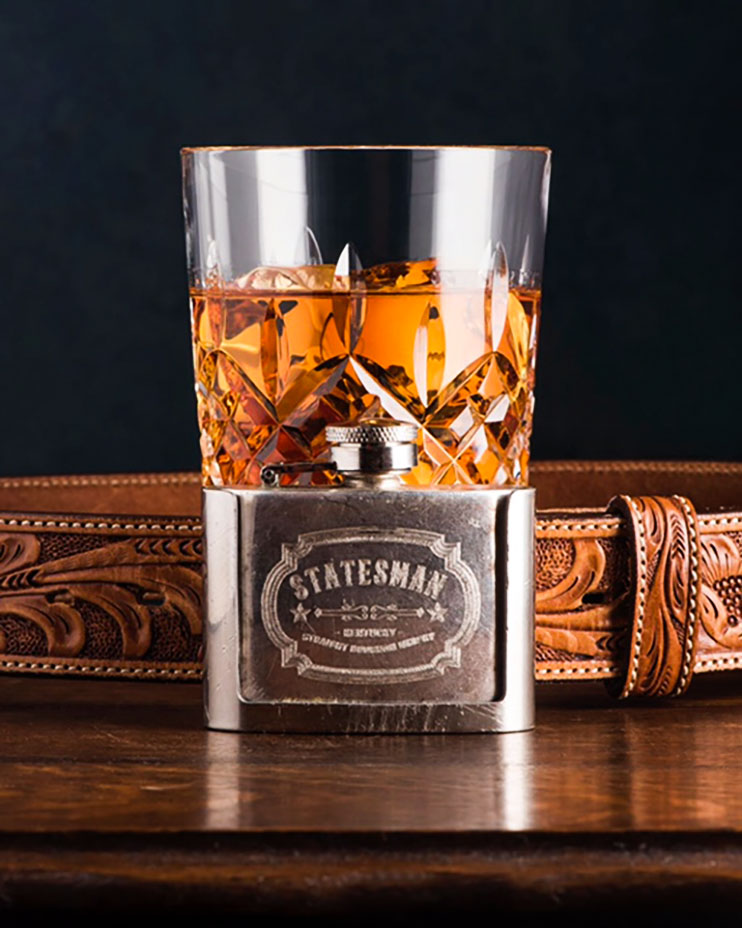 From there, the Old Forester team assisted the Kingsman crew in re-creating an authentic set with all the proper vintage elements. “We provided his production team with some of the story elements, we showed them our Pre-Prohibition bottles, aging warehouses and barrels. Initially it was only a technical assistance,” noted Brown. “But then we got excited about the whole idea. Part of this film shows the Statesman brand, so we decided to create the actual Statesman Bourbon.”

When asked if the whiskey bourbon was simply a current recipe repackaged with a fancy “Statesman” label, as some companies in the movie-marketing sphere are wont to do, Brown guffawed at the idea.

“Of course we wouldn’t do that,” he said, before launching into a detailed description of the brewing process for the Statesman batch, which is smaller in volume, “with fewer barrels, which we selected from the warmest warehouses, and the locations from within the warehouses that get the most heat.” He said of the brew, “It’s got quite a bit of character.”

And unlike the traditional Old Forester, which is 86 proof, the Statesman batch is 95 proof. “We wanted something really rich, like the characters,” he said. “Statesman has a depth that you wouldn’t get on the 86 proof. It has a more robust flavor and feel to it.”

The Statesman bourbon ($55) will be available in limited quantities ahead of this weekend’s Kentucky Derby, and will be released wide to coincide with the film’s September release.