Since the severity of the novel coronavirus pandemic first became widely apparent on March 11 — when, within a single hour, Tom Hanks tweeted that he had been diagnosed with the coronavirus, the NBA season was suspended and Pres. Donald Trump delivered an Oval Office address restricting travel from Europe — much of the world has stopped. But many of TV’s content creators never did.

Most TV platforms had a bit of a content backlog but not enough to last indefinitely. Fortunately for them, many content creators, growing restless at home and/or fearful about a loss of income for themselves or their collaborators, quickly came up with ways to safely forge ahead with their work. And since the cutoff for Primetime Emmys eligibility wasn’t until May 31, some of this work could be nominated.

The earliest coronavirus-era entertainment came in formats that aren’t Emmy eligible: DJ D-Nice‘s Homeschool at Club Quarantine streamed on Instagram Live March 21 to 22, and WME partner Richard Weitz‘s Zoom concerts started later in the month. Perhaps taking a cue from those offerings’ format and tone, John Krasinski created and hosted Some Good News, an uplifting YouTube series that ran for eight episodes starting March 29, attracting 72 million views (and, subsequently, a large ViacomCBS deal). It has been submitted in the variety talk series category alongside the traditional late night shows.

Those soon returned with their own remote incarnations. Some were recorded by spouses (Jimmy Fallon‘s wife, Nancy Juvonen, and Samantha Bee‘s husband, Jason Jones, are both producers), incorporated kids (Jimmy Kimmel‘s children met Spider-Man Tom Holland), featured virtual interviews and musical performances (James Corden gathered the cast of Dear Evan Hansen to perform “You Will Be Found”) and highlighted charities. Trevor Noah even extended The Daily Show‘s length from 30 to 45 minutes.

Viewer interest in remotely recorded programming tended to be high at the outset then declined. The first of Saturday Night Live‘s three “at home” episodes (the one hosted by Hanks on April 11 was a ratings hit, but the others weren’t) and American Idol’s four (it returned on April 26 featuring iPhone performances by contestants). The same was true of ABC’s Disney Family Singalong specials; the first on April 16 had better ratings among adults 18-49 than anything since the Oscars on Feb. 9, but the second, on May 10, while more polished, drew barely half its numbers.

There have been several star-studded variety specials to raise money for pandemic-related causes. The first was probably the prerecorded Saturday Night Seder on April 11, a one-hour YouTube stream during which dozens of celebs marked Passover with comedy, music and sketches, raising more than $3 million for the CDC Foundation’s Coronavirus Emergency Response Fund. 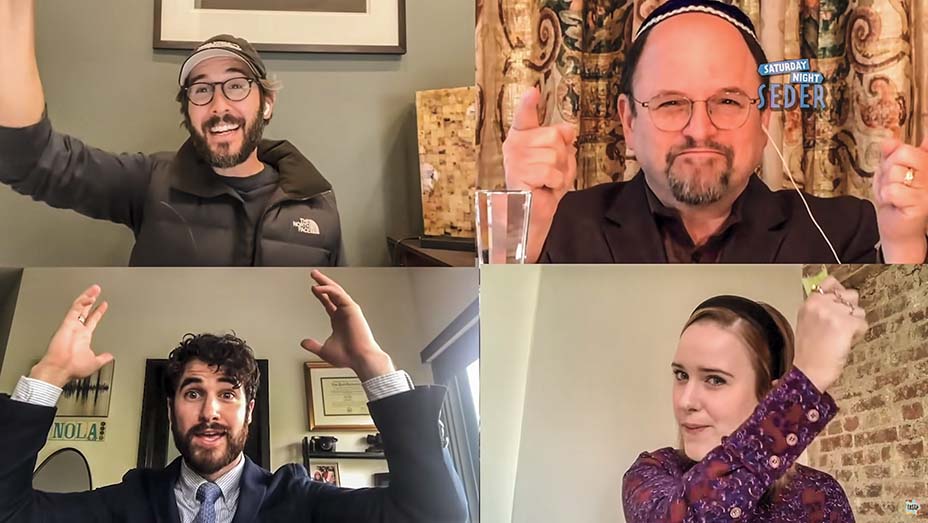 Other variety specials were broadcast live, the highest-profile program being One World: Together at Home, a two-hour special curated by Lady Gaga and co-hosted by each of the networks’ 11:30 late night hosts, which was widely syndicated April 18, attracting 270 million viewers worldwide and raising $128 million for health-care workers. Less polished was Broadway.com’s April 26 live stream Take Me to the World: A Sondheim 90th Birthday Celebration, a benefit for Artists Striving to End Poverty that featured the likes of Meryl Streep and Christine Baranski but began an hour late and was marred by technical difficulties.

In the nonfiction realm, Amazon began rolling out Regular Heroes, a docuseries about essential workers, on May 8. Netflix had dropped its own corona-appropriate docuseries, Pandemic: How to Prevent an Outbreak, back on Jan. 22, but it, like another Netflix docuseries, Coronavirus Explained, has been entered for the News and Documentary Emmys rather than the Primetime ceremony.

Three scripted shows quickly turned around episodes by incorporating pandemic-era realities into their storylines. NBC’s A Parks and Recreation Special reunited the core cast of the comedy on April 30, five years after they last were on the air together. The season finale of CBS’ legal drama All Rise, airing May 4, was shot via Zoom in just six days. And perhaps most impressively, Apple TV+’s workplace comedy Mythic Quest: Raven’s Banquet, which dropped its nine-episode season Feb. 9, rushed out an additional half-hour “Quarantine” episode May 22, donating $600,000 to charity in the process. Mythic Quest‘s co-creator/star Rob McElhenney told THR‘s Lacey Rose, “It was the hardest production I’ve ever been associated with, but it is also, by a mile, the production of which I’m most proud.”

Sometimes, we are being reminded, challenging circumstances bring out extraordinary work.