When Silver Lake Partners paid $200 million in 2012 for 31 percent of what was then known as William Morris Endeavor Entertainment, it created a domino effect that may yet ripple through the entire media ecosystem.

The investment gave the talent agency and co-founder Ari Emanuel access to valuable intel about the world’s economies garnered via the private equity behemoth’s $43 billion stakes in companies, and the infusion armed it with enough cash to take advantage.

In the seven years since, the company now known as Endeavor has made dozens of acquisitions, including rival IMG in 2014, the Miss Universe Organization the following year and the $4 billion pickup of Ultimate Fighting Championship in 2016.

This transaction led to two deals with ESPN for about $450 million a year through 2025, making Endeavor a truly diversified conglomerate — one that makes it possible, now with steady streams of cash, to do something no mere “talent agency” has done: offer shares of stock to the public. 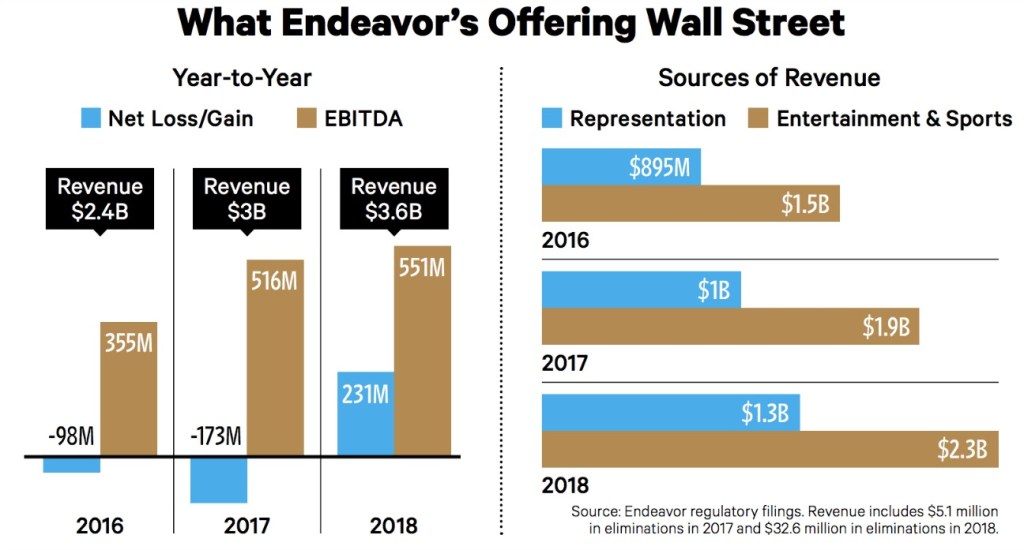 Endeavor’s May 23 filing for an initial public offering not only gives outsiders a glimpse into its financials — 2018 revenue of $3.6 billion and EBITDA of $551.1 million — it also sends clear signals in Hollywood and beyond. The first is that private equity firms can make big money in showbiz, as Silver Lake will when it cashes in on an IPO that is expected to raise $500 million to $800 million and value Endeavor at north of $6 billion.

When Silver Lake plowed another $500 million into Endeavor in 2014, it valued the company at $2.5 billion, while a $250 million investment for a 5 percent stake by Softbank in 2016 valued it at $5 billion. Multibillion-dollar profits tend to attract attention, so some observers are predicting that unprecedented amounts of cash will head in Hollywood’s direction.

Endeavor CEO Emanuel and executive chairman Patrick Whitesell also are in line for tens of millions of dollars post-IPO, and millions more are expected to flow downstream to agents and executives who have waited for this going-public moment — enough to make private equity-backed competitors like CAA and UTA envious.

If the Endeavor gambit works, some observers quietly predict consolidation in the talent representation industry not only to compete with the 800-pound gorilla but also to gear up for IPOs of their own.

“Silver Lake will make a multibillion-dollar profit, but it’s not clear how the story ends,” cautions Eileen Appelbaum, an economist with the Center for Economic and Policy Research. “Investors who got out of Lyft at the IPO made a killing. Those who bought at IPO price are under water.”

Endeavor and its backers also are signaling that they don’t fear the feud with the Writers Guild, whose members have been firing their agents over packaging fees — the long-held practice of bundling talent and selling a TV show as a package, with agencies reaping higher fees.

While conventional wisdom held that Endeavor had an incentive to settle the WGA matter before filing its IPO, some now say that a quick fix would have sent a signal of capitulation that wouldn’t have been received well on Wall Street. Plus, Endeavor’s revenue from “representation” at $1.3 billion in 2018 is secondary to what it makes elsewhere in sports, entertainment production and its numerous acquisitions, which also include Professional Bull Riders, the NeuLion streaming company, Frieze art fairs and marketing firm 160over90.

Wall Street is used to dealing with strikes and labor issues, but there is risk to the WGA situation that Endeavor acknowledges in its IPO filing, which came less than a day after the agencies made an overture to restart talks with the guild over a new franchise agreement. “It is impossible to reconcile the fundamental purpose of an agency … with the business of maximizing returns for Wall Street,” the WGA said when news of the planned IPO leaked in March. “The timing of Endeavor’s IPO is puzzling,” notes Appelbaum. “A continuing conflict with the writers wouldn’t be good for its share price.”

While many of Endeavor’s largest writing clients are locked into long-term contracts already, perception poses a risk for publicly traded companies. Another issue weighing on the Endeavor IPO is that the firm has amassed $4.6 billion in debt and has about $500 million in cash on hand, giving it a net debt-to-EBITDA ratio approaching about 8, twice what is generally considered high for a public company.

This raises the question of whether the IPO is coming when the company “needs” the cash infusion rather than when it is merely desirous of one. “There aren’t many public companies like this,” says Matthew Kennedy, an expert on IPOs with Renaissance Capital who expects Endeavor’s offering sometime between late July and just after Labor Day. “It has decent topline growth and an attractive set of entertainment assets, though earnings have been relatively weak and the company is leveraged to the hilt.” 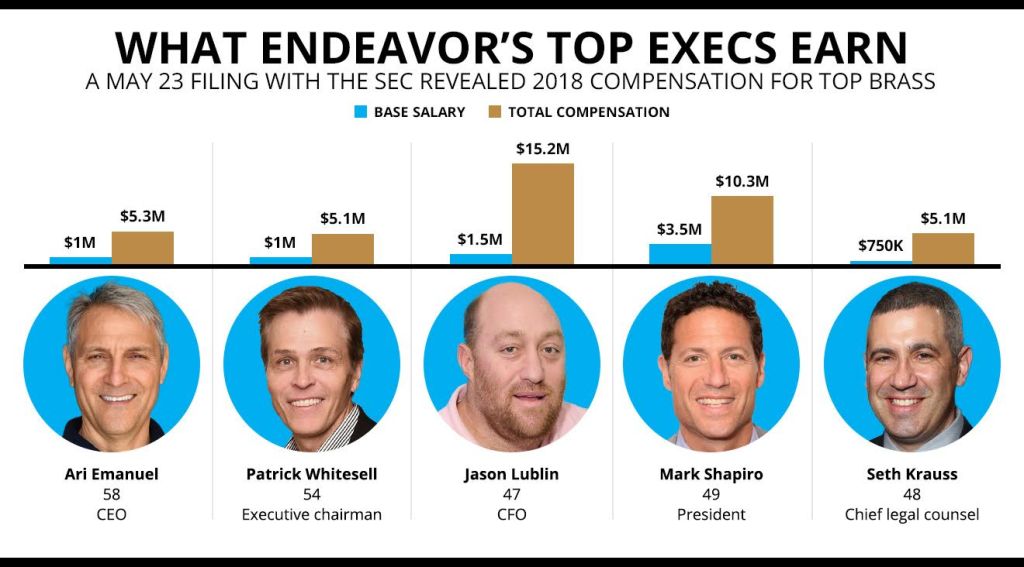 This story first appeared in the May 29 issue of The Hollywood Reporter magazine. To receive the magazine, click here to subscribe.