Here’s a quick test to determine if you’re the target audience for the new musical based on the songs of Jimmy Buffett. If you’re immediately able to add the words “and screw” to the song title “Why Don’t We Get Drunk” then it’s a pretty safe bet you’ll enjoy Escape to Margaritaville.

That a fairly large percentage of the crowd at a recent Wednesday matinee enthusiastically shouted out those lyrics indicates that the show may find its audience, even if New York is probably not the epicenter. But even those unfamiliar with Buffett’s songwriting oeuvre (I know, not a word usually associated with the composer of “Cheeseburger in Paradise”) should find the proceedings relaxedly enjoyable. This jukebox musical is the theatrical equivalent of sipping on a frozen drink while lying on a beach chair in the blazing sun. It’s not good for you, but it feels good.

The show displays a distinct sitcom-style sensibility; no surprise, considering that the book, which can charitably be described as rudimentary, was written by TV veterans Greg Garcia (My Name Is Earl, Raising Hope) and comedian-actor-writer Mike O’Malley (Survivor’s Remorse, The Mike O’Malley Show, Shameless). 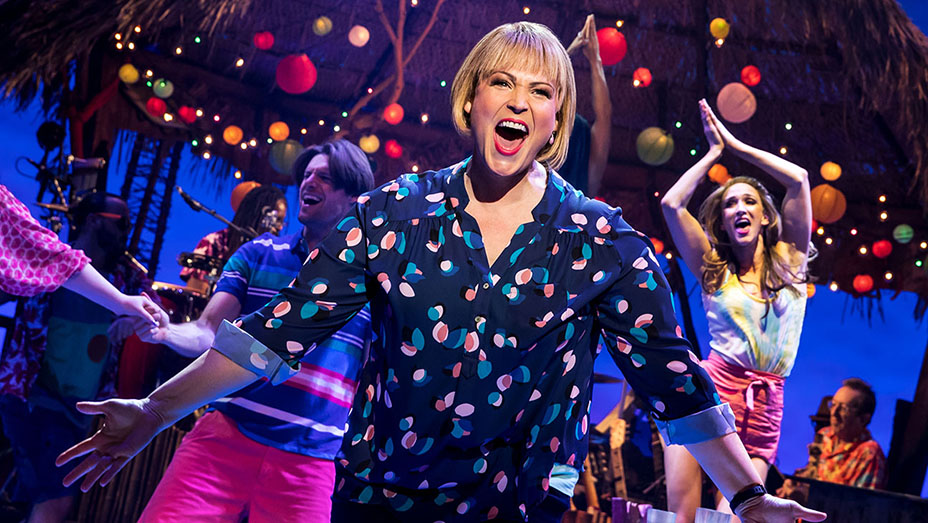 The storyline attempts to organically squeeze in more than two dozen Buffett songs (including a few new ones) while allowing plenty of room for bad puns and risque jokes about vibrators and Viagra. The prevailing aesthetic is perhaps best expressed when the principal character explains about himself, “The deeper you go, the less interesting it gets.”

Buffett’s trademark might be informality, but theater-reviewing formality dictates the inclusion of a plot summary, so here goes. The action mostly takes place in the titular tropical island hotel, where best friends Rachel (Alison Luff) and Tammy (Lisa Howard) have gone for a bachelorette vacation. Tammy is soon to be married back in Cincinnati to her boorish fiance (Ian Michael Stuart) whose main interests are watching hockey games and pressuring her to lose weight. Rachel, an environmental scientist, is less interested in sun and fun than procuring a soil sample from the local volcano for her new venture, which involves extracting energy from potatoes. Or something like that.

Among the hotel’s denizens is Tully (Paul Alexander Nolan), the charming lothario entertainer who specializes in bedding female hotel guests and bidding them farewell a week later with no ties or regrets. He immediately sets his sights on Rachel, who doesn’t take long to succumb to his easygoing charms and six-pack abs. Tammy, meanwhile, finds herself drawn to the sweet-natured, not-so-bright bartender Brick (Eric Petersen), who thinks she’s terrific just the way she is. There’s also Marley (Rema Webb), the hotel’s feisty owner; J.D. (Don Sparks), the one-eyed old coot who keeps trying to bed her; and Jamal (Andre Ward), the handyman who’s only mildly impaired by a broken arm. There’s even a token gay couple, though they don’t get names or dialogue.

Despite all the romantic sparks flying, the women head home at the end of their vacation even as Tully realizes he’s fallen in love for the first time. When the volcano threatens to erupt, Tully and Brick escape with J.D. in his plane and wind up in Cincinnati so Tully can tell Rachel how he feels. Further complications ensue.

If the storyline sounds loose, it’s perfectly in keeping with a musical whose laid-back vibe is expressed in such songs as “License to Chill,” “It’s Five O’ Clock Somewhere,” “Changes in Latitudes, Changes in Attitudes” and “Cheeseburger in Paradise.” It’s only when the writers attempt to provide literalism to the lyrics of a song like “Margaritaville” that the show feels hopelessly strained. When you hear about “nibblin‘ on sponge cake,” a “lost shaker of salt” and a “brand new tattoo,” rest assured that you’ll be seeing sponge cake, a shaker of salt and a tattoo.

Nonetheless, the overall silliness goes down fairly easily, and even easier if you partake of the frozen margaritas inevitably sold at the lobby bar. The show exudes an affable likability that’s hard to entirely resist, much like the cheeseburgers that Tammy finds so tempting. 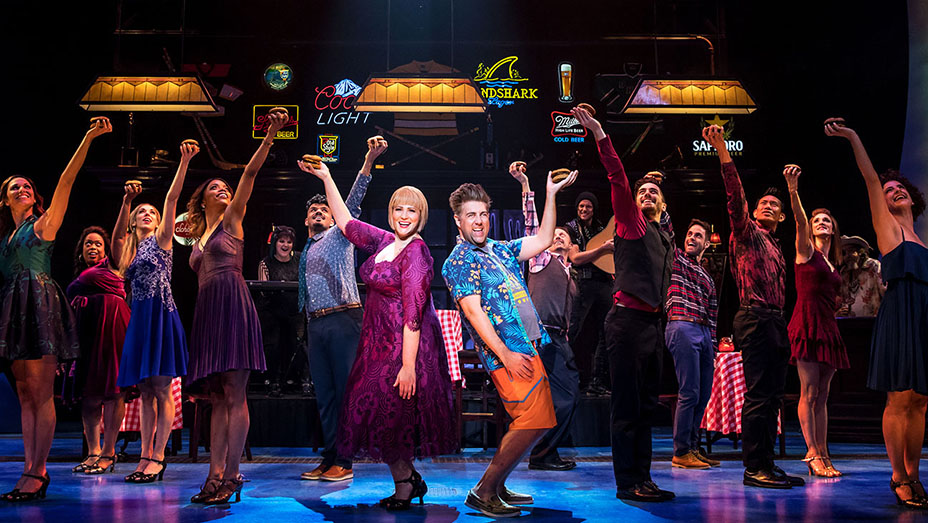 The clever staging of Christopher Ashley — a Tony winner last season for Come From Away — features such amusingly absurd touches as dancing clouds and characters snorkeling in midair, while Kelly Devine’s exuberant choreography makes snappy use of beach towels. (Did I mention the chorus of tap-dancing insurance salesman ghosts?) Walt Spangler’s tropical-hued sets and Paul Tazewell’s bright-patterned costumes will have you itching to book your next beach vacation.

It also helps immeasurably that such a talented cast of Broadway veterans has been assembled. Nolan (Bright Star, Jesus Christ Superstar) and Luff (Les Miserables, Matilda) both have charm and charisma to spare and sing beautifully; the delightful Howard and Petersen score consistent laughs as the romantic leads’ sidekicks; and Webb, Sparks and Ward make the absolute most of their broadly drawn but engaging characters.

Escape to Margaritaville is the perfect show for folks who would rather wear Hawaiian shirts and shorts than fancy clothing to the theater. After all, you need to dress comfortably to bat around those beach balls thrown out into the audience at the evening’s raucous conclusion.