The week before Thanksgiving last year, Bob Arum, the founder of Top Rank Boxing who has been in the fight game since 1966 (when he started as Muhammad Ali’s promoter), was at home in Las Vegas when he got a call from Ari Emanuel. “He says, ‘I’m getting on a plane,'” recalls Arum, 85. When they met Nov. 22, Emanuel told Arum, who was joined by his stepson and Top Rank president Todd duBoef, that he wanted to buy the Top Rank library, which is stocked with iconic fights, including the 1975 “Thrilla in Manila” between Ali and Joe Frazier.

Just a few months earlier, in July 2016, Emanuel’s WME-IMG had purchased UFC, the Las Vegas-based mixed martial arts league, for a staggering $4 billion, and there have been hints the company might be interested in a foray into boxing. (“We’re sniffing around,” UFC president Dana White recently told The Hollywood Reporter.) After Emanuel asked Arum and duBoef about their plans for Top Rank, they told him to speak to their agents at CAA, and the conversation ended there.

What Arum didn’t tell Emanuel was that Top Rank — working with CAA’s Nick Khan and Evolution Media Capital’s Alan Gold, who runs the sports rights division of the investment bank that is partly owned by CAA — already had taken a series of meetings with potential suitors (NBC, Fox and Amazon) and was a month into a courtship with Disney’s ESPN. “I could have said, ‘Just give me the money,'” says Arum. “But I want to build something.”

On Aug. 18, Top Rank reached a four-year deal with ESPN that is set to be announced at a news conference in Las Vegas on Saturday — the same day as the mega-bout between UFC superstar Conor McGregor and boxer Floyd Mayweather Jr. The pact, whose financial terms have not been disclosed, will mean that boxing, which has seen its fan base erode while younger fighting fans have thronged to the MMA of the UFC, will have a major presence on linear television for the first time in decades rather than funneling its top bouts to pay-per-view, which has been the primary business model for boxing since Arum himself staged the sport’s first PPV fight in 1987 between Sugar Ray Leonard and Marvin Hagler.

Under terms of the deal, Top Rank will create a direct-to-consumer boxing vertical with international reach (the sport remains popular in the U.K. as well as in Asia and Latin America), and ESPN will get a minimum of 16 fights a year to run on ESPN (or ABC in primetime), with a minimum of two additional direct-to-consumer live boxing cards exclusive to ESPN’s upcoming multisport digital service that’s set to launch in early 2018. Also included in the deal are at least 50 additional hours of programming on ESPN each year, including studio shows, documentaries and other boxing programming. As for the Top Rank library that Emanuel coveted, ESPN is getting the rights, and archival fights will be available on the ESPN OTT service.

Boxing is long past its prime of four decades ago, when it featured the most popular athletes of the era on the broadcast networks. During the 1970s, in fact, Arum negotiated fight matchups with Bob Iger, whom ABC Sports chief Roone Arledge had put in charge of the network’s boxing portfolio. Iger, now Disney CEO, “is a boxing fan,” says Arum. “You could talk to him about the fights he did with me 40 years ago — he knows what happened round by round.”

Can Disney Create a Netflix of Sports?

By striking a new alliance with ESPN, which from 1980 to 1996 ran a weekly Top Rank boxing series, Arum sees a chance to restore his sport to its perch as a top draw. “I fucked up the business because the network said, ‘What the hell are we doing the minor-league stuff for when all the good stuff is going [to premium cable and PPV]?'” says Arum. “We had a really, really flawed system. The problem was we were all making money with it. So if you’re making money, you know, what the hell.”

Networks became increasingly reluctant to dedicate the resources and effort to building a sport they ultimately never would control, and boxing began to feel the heat from MMA, whose stars, including Ronda Rousey and the tattooed Irish southpaw McGregor, have achieved crossover status, in many ways eclipsing their boxing counterparts. The shift is a major reason that the undefeated champ Mayweather is coming out of retirement at age 40 to fight McGregor, 29, in a spectacle that many are predicting will demolish the record 4.6 million PPV buys for Mayweather’s 2015 bout against Top Rank standout Manny Pacquiao.

The timing and location of Saturday’s announcement seems designed as much to capitalize on the sports media that will be gathered in Las Vegas for McGregor-Mayweather as to poke a proverbial finger in the eye of UFC. Emanuel and his partners at WME-IMG are in the throes of negotiating a new UFC media rights deal, and they are seeking a hefty premium over the $115 million Fox Sports now pays for the franchise each year. They’re also looking to bring a streaming partner into the next rights package. If they had struck a deal for the Top Rank library, for instance, it could have lived on UFC’s own OTT service, Fight Pass.

When Iger announced Aug. 9 plans for the ESPN OTT service — which will be powered by BAMTech, a streaming provider in which Disney has a 75 percent, $2.6 billion stake — he said the new platform will stream 10,000 hours of live exclusive sports annually, including MLB, NHL, Major League Soccer, Grand Slam tennis and college fare. ESPN’s distribution deals preclude much of the network’s programming from migrating to the platform — for now. The digital service also will offer individual sports packages for purchase, but Iger did not reveal a pricing strategy.

Burke Magnus, ESPN’s executive vp programming and scheduling who oversees the relationship with BAMTech, says the Top Rank library content will be a way for Disney to “keep the lights on” at the OTT service on a year-round basis. “Vasyl Lomachenko and Terence Crawford, Michael Conlan and Shakur Stevenson, these guys should be way more well-known than they are,” says Magnus. “And we think that’s the opportunity lying on the table: taking our platforms and Top Rank’s content and putting boxing back in the forefront of the sports world.”

In an increasingly OTT ecosystem, Top Rank’s alliance with ESPN is a smart move, says Frank Hawkins of sports and media consulting firm Scalar Media. “Fights are not the mass entertainment product they were in the Frazier-Ali heyday of the ‘70s,” he says. “But they’re still live events, and they’re still relatively mass. Any live content is going to be at a premium, and live content that draws substantial views gives you a lot of flexibility to play with your pricing models and figure out what’s going to work as you evolve away from the forced-buy subscriptions.”

The ESPN deal also all but ends Top Rank’s relationship with HBO, where the promoter’s fights have aired on PPV. In a statement to THR, HBO Sports executive vp Peter Nelson points to the premium network’s Sept. 16 bout between Canelo Alvarez, with whom HBO has a multiyear deal, and Gennady Golovkin as the “best fight of 2017” and adds, “We cannot show every fight, though we remain fans of [Top Rank boxers] Terence [Crawford] and Vasyl [Lomachenko] and proud of what we did for their careers together with Top Rank. We wish them the best.”

Top Rank might marginally remain in the premium PPV business; under terms of the deal, there are a limited number of fights it could take to premium cable, though ESPN has certain rights to those bouts, says a source with knowledge of the deal.

Whether the mass of ESPN — still the sports leader, even as its subscriber base has dwindled from 100 million households to a little less than 87 million — can reposition boxing is an open question. There have been previous attempts to return the sport to the mainstream, as CBS in 2015 struck a deal with Premiere Boxing Champions, run by Mayweather manager Al Haymon, for a series of Saturday afternoon cards. ESPN already has aired a handful of Top Rank fights. The first televised bout, between Pacquiao (who is in the waning years of his career) and unheralded Aussie Jeff Horn on July 1, a Saturday, was a blockbuster for the network, averaging 3.1 million viewers on ESPN and ESPN Deportes and peaking during the final half-hour with 4.4 million viewers across both networks. That made it the most-watched boxing telecast on cable TV since 2006 and ESPN’s highest-rated boxing event since 1995. And the controversial decision awarding the fight to Horn surely helped to boost the post-fight edition of SportsCenter, which earned a 1.3 household rating at 1:15 a.m. But the second fight — on Aug. 5 between Lomachenko and an overmatched Miguel Marriaga — pulled in just 728,000 viewers. There were caveats, not least of which was the fight’s start time, nearly 1 a.m. on the East Coast (long acceptance speeches from the Pro Football Hall of Fame delayed things). The third fight, on Aug. 19 between Crawford and Julius Indongo, rebounded slightly, pulling in a 1.0 rating for the main event.

ESPN’s move into OTT could have an outsized impact on the cable bundle and the streaming sports ecosystem. But it will have competition — Turner will launch its own OTT sports service next year and announced Aug. 17 that a new three-year deal with UEFA, the European soccer league, will be a core pillar of that offering.

“We were an underdog going in,” says duBoef of a meeting while he and Arum were shopping Top Rank’s content. “And one of the executives” (he won’t say who) “sits back in his chair and goes, ‘So what makes this a different story than what I’ve heard over all these years?’ The difference was they were never offered the entire vertical.” 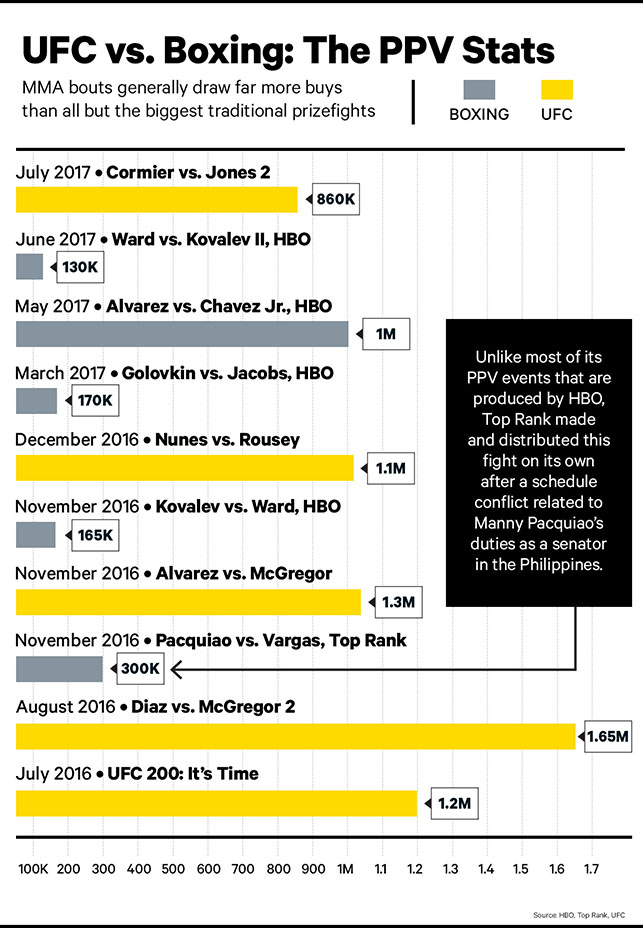