The curtain has closed on Apple’s March 25 event.

For the first time ever, the technology giant’s biannual product showcase focused on its plans in the media and entertainment space. It included announcements about Apple TV+, a new video streaming service that will feature original programming from the likes of Steven Spielberg and Oprah. The company also unveiled subscription news offering Apple News+ and mobile game streaming service Arcade. There was even a new titanium credit card that wowed the audience.

Standing onstage inside the Steve Jobs Theater, Apple CEO Tim Cook promised that the showcase would be “a very different kind of event.” And it was.

Instead of focusing on devices like iPhones or MacBooks, executives devoted the event exclusively to software and services made for those devices. The new offerings are all part of Apple’s plan to find ways to keep consumers in its ecosystem as they begin to hold on to their iPhones for longer.

Apple has long offered the music-centric iTunes service for buying songs and purchasing or renting movies and TV shows. In 2015, the company expanded its music business with the launch of Apple Music, which offers unlimited music streaming a la Spotify for $10 per month. Apple Music now has over 50 million paying subscribers. But Apple has long had Hollywood envy and has spent years exploring the best way to compete in the streaming video space. With the launch of Apple TV+, it will hope to boost the amount of time (and money) that people spend watching high-quality video programming through an Apple-designed experience.

Another way this Apple event stood out from the others: Oprah. Appearing onstage in the final moments of the presentation, the media titan revealed plans for two documentaries and a new book club. Her goal, she told the crowd, is “to move together 1 billion-plus strong into a future of our own design, all connected through Apple.”

THR breaks down all the big announcements from Monday’s nearly two-hour-long event.

Video heads Jamie Erlicht and Zack Van Amburg took the stage to unveil the forthcoming service, which will be an ad-free subscription offering. The TV+ service will live in Apple’s revamped TV app and sit alongside a channels platform where people can subscribe to services from third-party networks like HBO, Showtime, Starz and CBS All Access.

While the new Apple TV app and Apple channels offering will be available in May, TV+ will officially begin rolling out this fall, but pricing has yet to be announced. Original programming offered will include drama The Morning Show starring Jennifer Aniston, Reese Witherspoon and Steve Carell and the Spielberg-produced anthology Amazing Stories.

An add-on to the existing Apple News app will feature a new design meant to highlight magazine content from a range of more than 300 partners, including Vogue, National Geographic and Elle, as well as news stories from newspapers The Wall Street Journal and Los Angeles Times and such digital outlets as Vulture, The Cut and TheSkimm. (The Hollywood Reporter also is a launch partner for the service.)

Now available, News+ costs $10 in the U.S. and $13 in Canada with a free one-month trial. The service will roll out in the U.K. and Australia later this year. 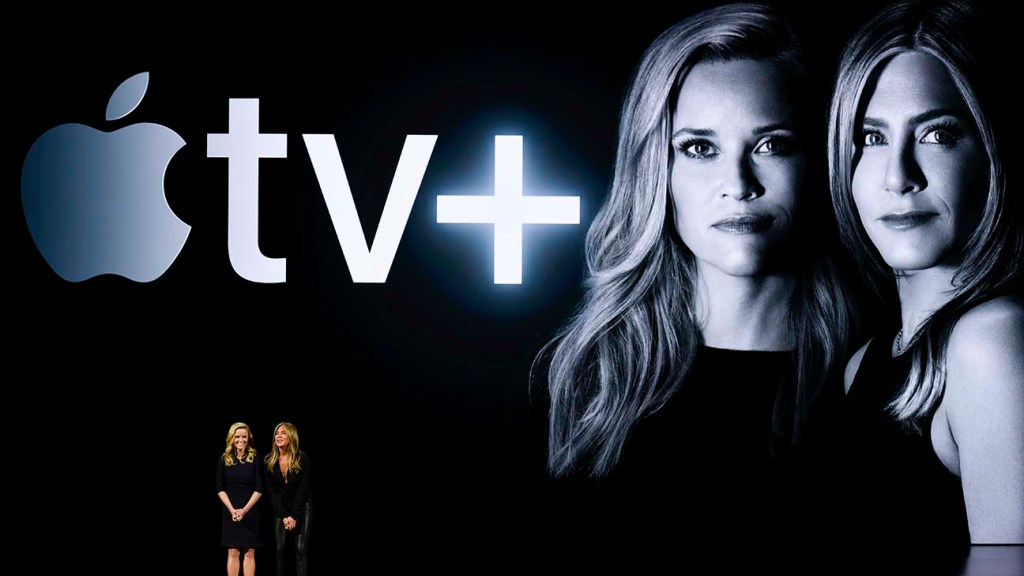 The game subscription platform will allow people to play more than 100 new and exclusive mobile titles developed specifically for Apple. Game creators Hironobu Sakaguchi, Ken Wong and Will Wright are all signed on to develop original games for Arcade. Apple execs are positioning it as a complement to the nearly 300,000 free and paid games already available in the App Store. Games from Annapurna Interactive, Bossa Studios, Cartoon Network, Konami, Lego, Sega and others will be part of the service.

Arcade will launch in more than 150 countries this fall and will be accessed via a new tab on the App Store. Pricing has yet to be announced.

A mobile-first credit card that lives inside Apple Wallet, the new credit card has no fees and offers 2 percent cash back on purchases. (That goes up to 3 percent on purchases made from Apple.) Software features include color-coded categories to help people track how they spend their money and regular spending summaries.

Apple is working with Goldman Sachs and Mastercard on the new credit card, which isn’t just digital. All cardholders also receive a titanium card that features no card number, no security code, no expiration date and no signature. Sign-ups are now open.