The singer stepped out in a black latex bodysuit and white harness from Dead Lotus Couture (a more summery version of her Grammys look), worn under a black latex cropped jacket with red sleeves with “a little bit of a militaristic vibe to it,” her stylist Alexandra Mandelkorn tells The Hollywood Reporter.

The first look was completed with Chanel boots, a custom patent hat by Ruslan Baginskiy with a red ribbon across the front and a custom pair of light-up glasses by Nicholas Kirkwood. The clear plastic glasses have an etched design (reading “Jane 57821,” her character in her Dirty Computer film) and feature two LED lights that projected a grid across her face. “It’s very matrix-style,” Mandelkorn adds. 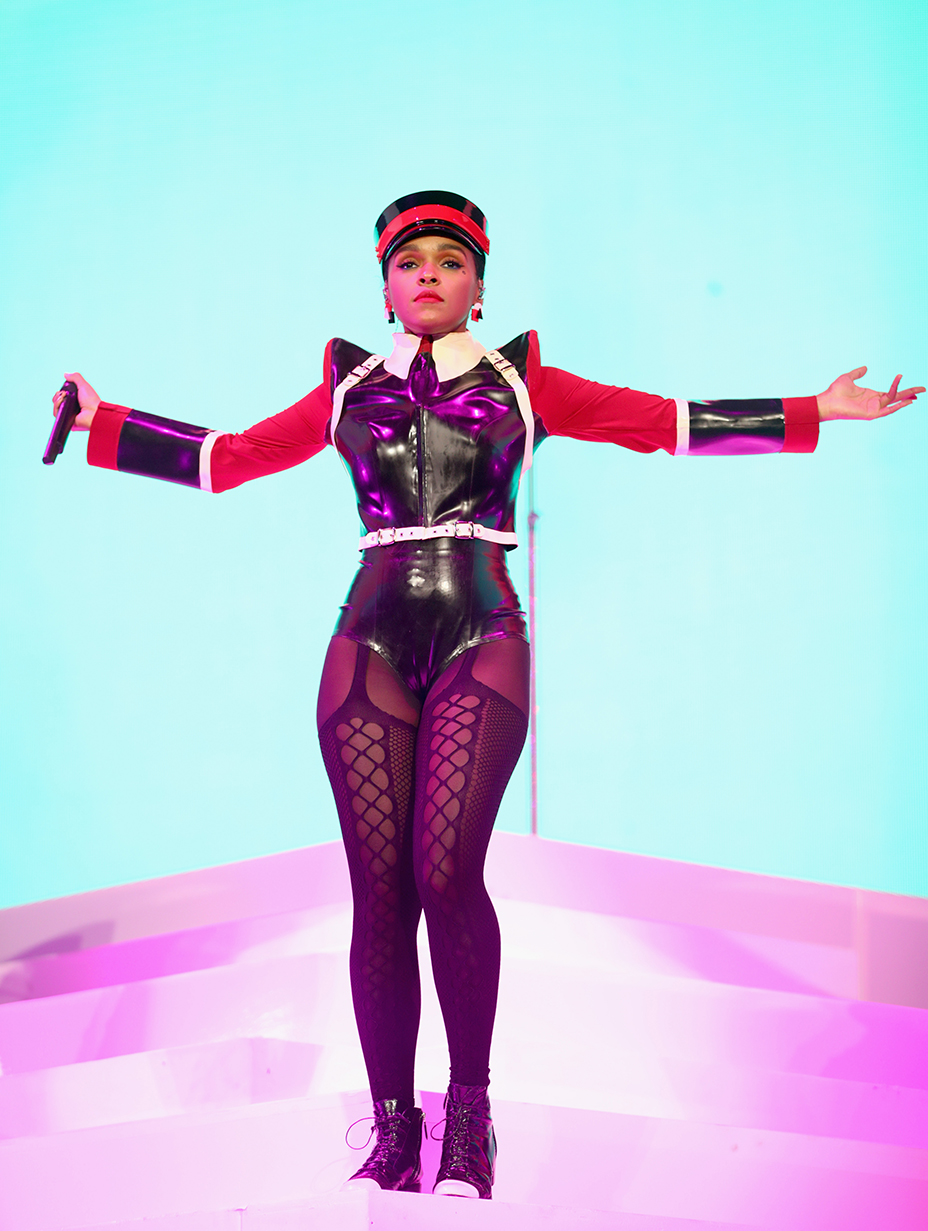 The final of five looks included a heavy military style as well — another latex coat by Dead Lotus Couture with red buttons and braided red rope detailing on the shoulder in a three-tier design.

“She’s like some starship commander from an amazing Afrofuture planet,” Mandelkorn says. “There’s a through line of militaristic elements throughout the show. It gives a commanding presence and evokes the sense of leadership and leading a revolution, leading a charge. And Janelle’s message is one very much rooted in love and spreading that sort of mentality. Having the militaristic elements but someone who is preaching love is a dynamic we don’t often see.” 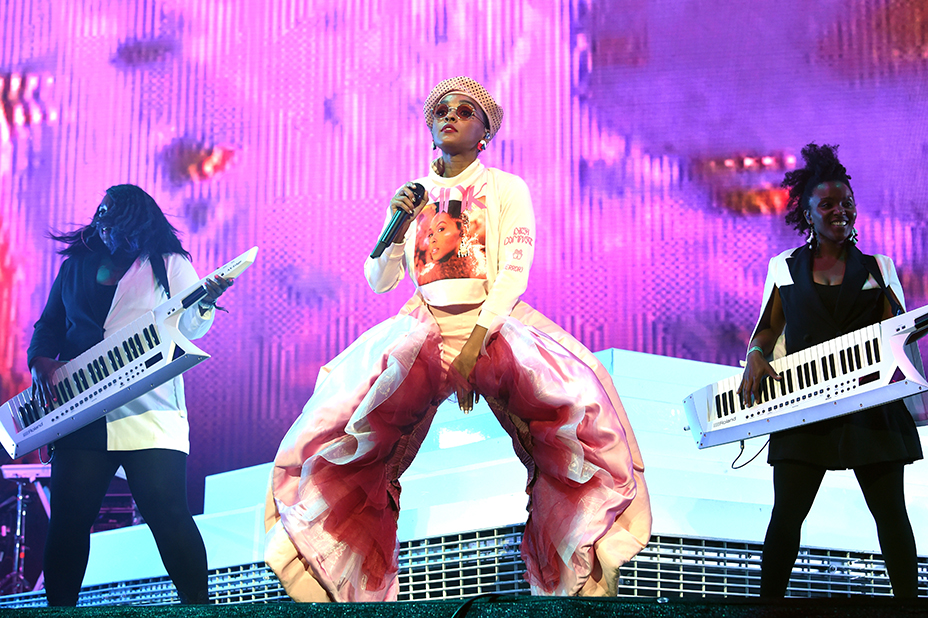 The stylist’s favorite piece from Coachella, which included a mix of iconic costumes, revamped accessories and new outfits, was the powerful jacket “especially paired with the sparkle pants that she wears underneath it.”

When crafting the looks for Coachella, Mandelkorn says Monae wanted something that felt past, present and future. Her album Dirty Computer, which has ’80s musical influences, including strong shoulders.

“But then we’re also trying to create a feel that feels futuristic and something that would be from [the year] 2194. Something that feels a little otherworldly but also things that feel current to now. So we try to take little bits and pieces of all these different time frames and incorporate them together into one experience,” says the stylist. 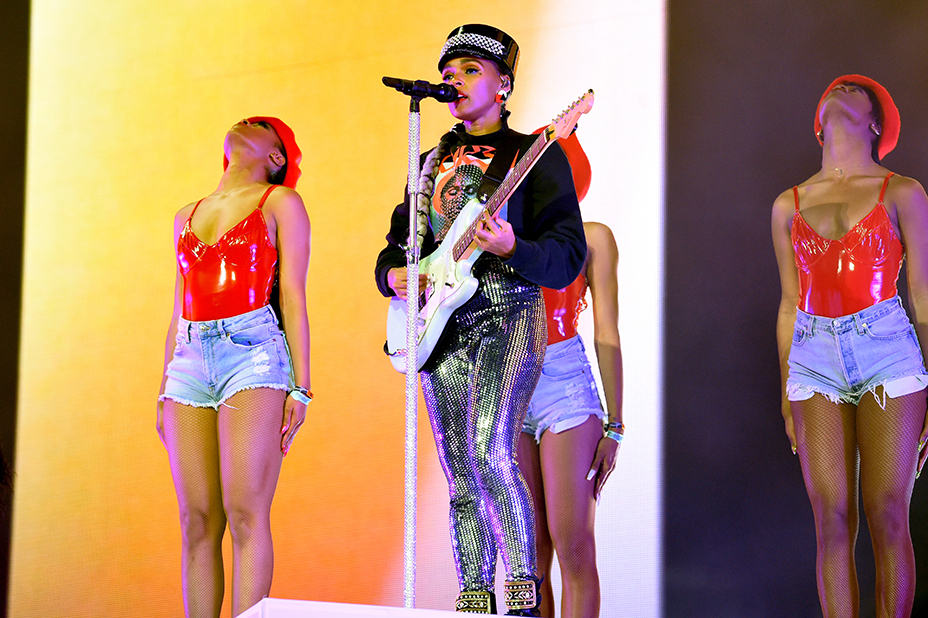 After her opening outfit, Monae switched into her well-known “Django Jane” look, which she wears on Grammys posters — “It’s one of those looks that I think has become very synonymous with her,” Mandelkorn adds. She says the outfit brought in the Afrofuture element because they made the jacket from an African mudcloth fabric into a style with big shoulders and a long coat train. On her head, Monae donned a matching black-and-white kufi, which they found at an African store.

Monae then changed into her “pink vagina pants “— by Dutch designer Duran Lantik from her “PYNK” music video — along with a “PYNK” merch sweatshirt. As for the hat, it was a last-minute decision between a custom pink beret with sparkles and an asymmetrical pillbox shape with a puffball on top, both by Eugenia Kim. The singer removed the pants and kept on the sweatshirt and tights through her next couple numbers. 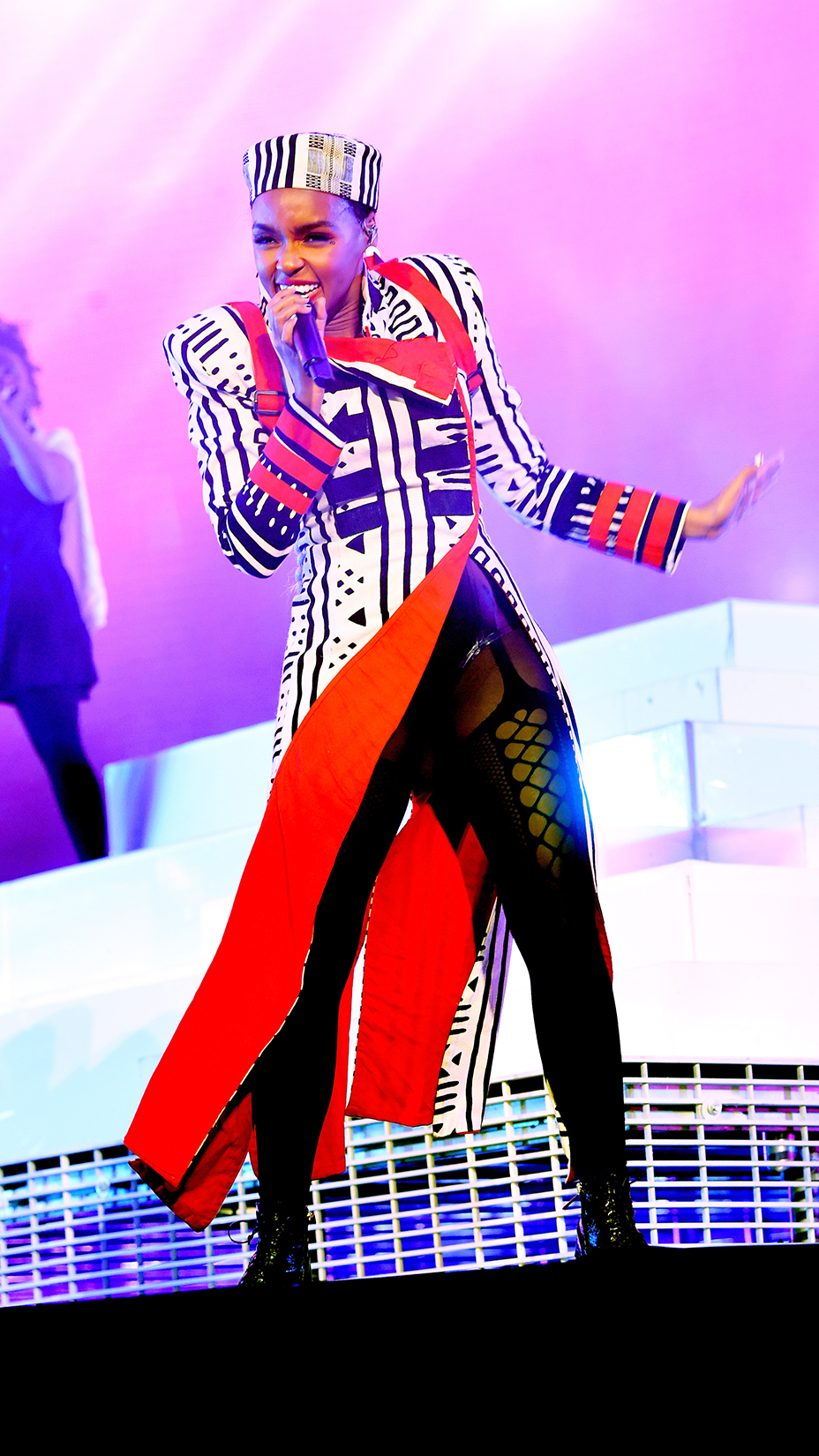 For “Make Me Feel,” Monae sported her recognizable sparkle pants made by her tailor Bebe Aguirre for her tour, as well as another custom Ruslan Baginskiy hat and the House of Emmanuele crystal face mask she wore on the album cover.

The sparkle pants had a moment of their own when Monae became completely backlit and performed a “Michael Jackson-esque dance break” that allowed the pants to “just really shine” in that moment. 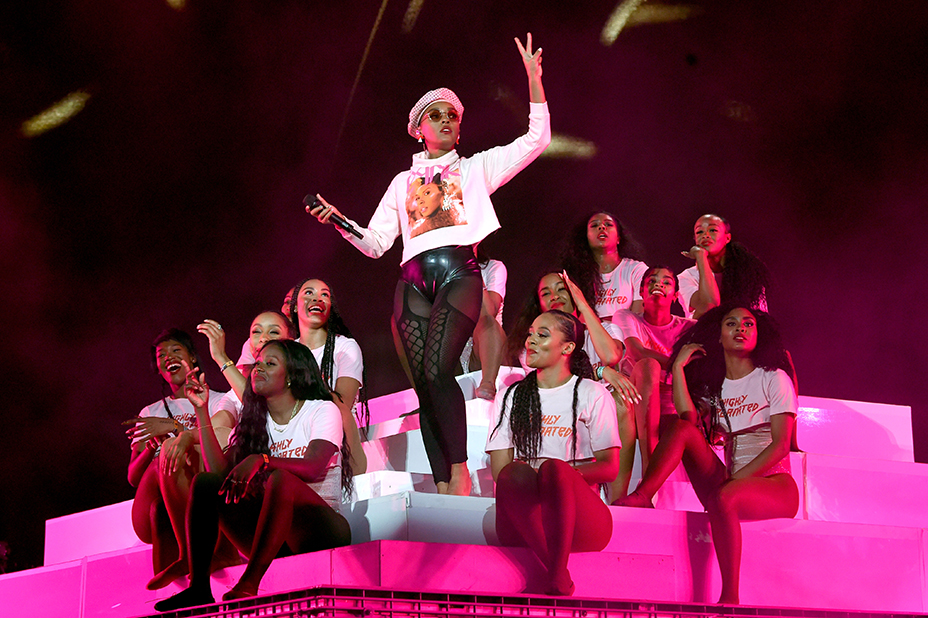 The timeless looks — not in the classic sense, but in how they merge eras — helped pull audience members into Monae’s world. “For 50 minutes, you’re being transporting to Janelle Monae land, and it doesn’t matter what other setting you’re in,” Mandelkorn says of Coachella. “For an artist like Janelle, who has such iconic fashion moments, it’s a really good time to showcase those and get people to feel her personality through that.”

Elsewhere at the festival, expect to see Monae in Chanel boots and deconstructed suits: “You’ll definitely see some blazers on her while she’s out there. Definitely some black and white, of course. I think a little bit more festival Janelle. A little bit more casual,” her stylist adds of her off-duty attire. “She’s never trying to get too fancy for anything. She just always wants to feel cool and in her element.”