Lori Loughlin’s daughter Olivia Jade Giannulli — at the center of a university cheating scandal — could be in some serious hot water with a multitude of brand sponsorships hanging in the balance. Tresemme and Sephora announced Thursday they will stop working with Olivia Jade.

The beauty blogger, social media star and YouTuber has 1.9 million subscribers on the video platform and another 1.3 million on Instagram. In the past two years, she has scored sponsorship deals with beauty and fashion companies Sephora, Too Faced, Tresemme, Smashbox, Marc Jacobs Beauty, Lulus, Boohoo and Dolce & Gabbana beauty as well as HP Inc.

Yet Loughlin was charged Tuesday for allegedly paying $500,000 in bribes to a USC employee to designate her two daughters as recruits to the school’s crew team — even though they did not participate in crew. Loughlin was indicted Tuesday along with fellow actress Felicity Huffman and more than 40 others involved in the college entrance cheating and bribery scandal, though “it remains to be seen if we charge any students,” Andrew Lelling U.S. Attorney for Massachusetts, said during a media conference.

In a statement to The Hollywood Reporter on Wednesday, HP said the company worked with both Lori Loughlin and Olivia Jade in 2017 “for a one time product campaign. HP has removed the content from its properties.” The company added, “HP does not currently have a relationship with either of them.”

“Lulus has not worked with Olivia Jade since August 2018 and we have no plans to do so in the future,” said Colleen Winter, co-founder and CEO, to THR in a statement on Thursday.

Loughlin’s other daughter, 20-year-old Isabella Rose Giannulli, is also an influencer with 260,000 followers on her Instagram account @bella, but had her account set to private as of Tuesday afternoon. 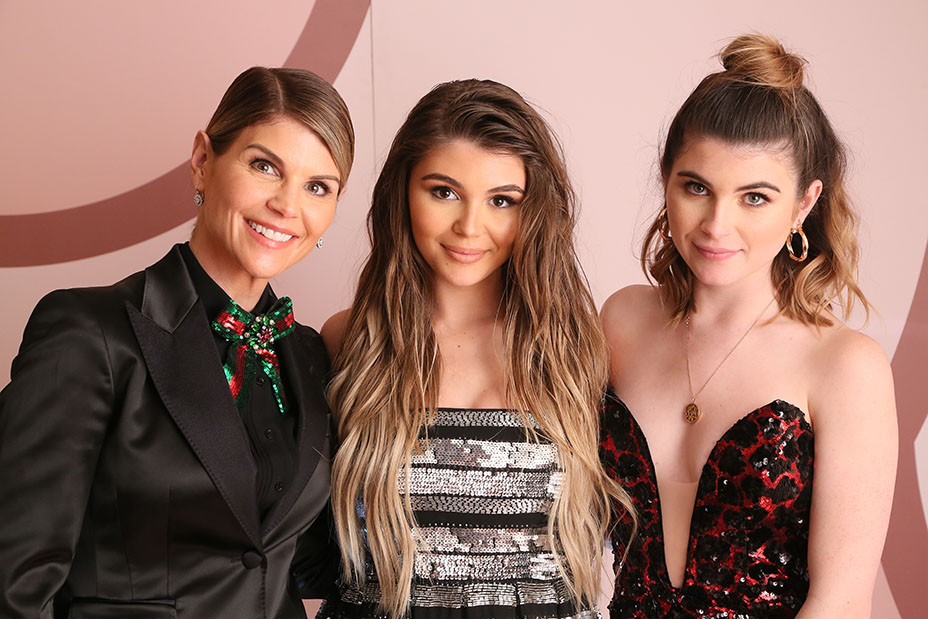 Olivia Jade Giannulli started school at USC last fall and also appears in a brief scene in Eighth Grade when Kayla (Elsie Fisher) watches a makeup tutorial on YouTube. Olivia Jade posts fashion and makeup tutorials as well as lifestyle videos, many with college-oriented titles such as  “Spend Time With Me at College,” “College Dorm Tour” and “College Night Routine.”

“I’m just so emotional and so happy,” Giannulli said, through tears, on her channel while announcing the palette’s debut. “I have chills.” She said she went to the Sephora headquarters to make samples and test her product, calling makeup her “biggest passion in the world.”

“After a careful review of recent developments, we have made the decision to end the Sephora Collection partnership with Olivia Jade, effective immediately,” Sephora told THR in a statement on Thursday.

Her personal brand-building is now being called into question along with the validity of her college admission. Will she be dropped or face other repercussions? Her brand partners did not respond to requests for comment, and her publicist, Elizabeth Much at East 2 West Collective, told THR by email, “I have no information at this time.”

Hey, Lori Loughlin: This Is How to Buy Your Way Into USC — and Get Away With It

“The important thing to understand about the celebrity/influencer sponsorship space is that brands are very risk-averse,” Eric Dahan, CEO of Open Influence, a data-driven influencer marketing company with a network of 485,000 influencers, told The Hollywood Reporter on Tuesday. “Brands spend millions of dollars building up and defending their brand name, and understand that the wrong sponsorship can undo all of their hard work. Typically, having a criminal record or any negative press makes an influencer radioactive in the eyes of an advertiser.”

A Hollywood school consultant added that Giannulli may have actually qualified to be accepted to college on her own merit, noting that significant accomplishments by college applicants are “taken seriously” in the application process, including leadership in different realms, which could include being an influencer. “Yes, those things could definitely have helped her,” the expert told THR.

It turns out that Giannulli’s parents may have had greater college ambitions for their 19-year-old daughter than she did, as reported by BuzzFeed. In a podcast interview on The Zach Sang Show, the influencer said: “Mostly my parents really wanted me to go because both of them didn’t go to college. … I’m so happy they made me go — that sounds so terrible. They didn’t make me. My sister goes to the same school, and we’re pretty much inseparable.”

Later in the interview, Giannulli referred to her parents as “hypocrites,” adding that her father “faked his way” through college: “He, like, built his whole entire brand and he wasn’t actually, like — I don’t know if I’m supposed to say this — ever enrolled in college. But he, like, faked his way through it and then he started his whole business with tuition money that his parents thought was going to college.”

back home from an amazing #TRESnyfw w @tresemme! brought my fave products home with me (including micro mist level 2) #trespartner

Had so much fun at #SEPHORiA a few weeks ago! Go watch my latest video with #SephoraCollection link in bio #BeautyUncomplicated #ad @SC

March 14, 3:50 p.m.: Updated with statement from Tresemme and addition from HP.