After a casting director was anonymously quoted last week as saying that “Asians are a challenge to cast because most casting directors feel as though they’re not very expressive,” the hashtag #ExpressiveAsians took over Twitter as users shared their outrage on the comment.

But on Thursday night, this was all new information to Angelina Jolie, whose latest directorial drama First They Killed My Father features a cast composed solely of Asian actors, many of whom are nonprofessionals and appear onscreen for the first time.

“Who said that? What’s wrong with them?” she told The Hollywood Reporter, dropping her jaw in surprise. “I hadn’t heard that, but it just sounds completely ignorant. Wow, it’s just insane.”

When asked about what the controversy’s naysayers could learn from Jolie’s Netflix title, she explained, “I hope people see this film and they do recognize the great artists that made this film and the extraordinary performances. … I hope they recognize the talent from Southeast Asia. All artists express in different ways — I find all people to be artistic and expressive — and I find Cambodian people extremely creative and expressive!”

Adapted from Loung Ung’s memoir, First They Killed My Father recounts Ung’s harrowing survival story under the Khmer Rouge regime, as her hometown was overtaken, her family was separated and she was forced to become a child soldier. The genocide included the deaths of one-quarter of the country’s population.

“Cambodia is a very special country — I hope when you see this, you do understand what they’ve gone through but you also not only see the hardships, you see the resilience of these extraordinary people,” Jolie told attendees after an introduction from Netflix film chief Scott Stuber. To Ung, she said, “Thank you for allowing us to tell your family’s story.”

The intimate New York City event, held just hours before the historical drama became available on Netflix, was a joyous family affair. Jolie, wearing a pleated taupe Dior Haute Couture gown that showcased her arm and back tattoos, gathered her six children and the film’s cast for photos before the film was shown at the Directors Guild Theatre. Ung’s four sibling survivors also attended the screening, which was followed by a bash at the restaurant Jams inside 1 Hotel Central Park. 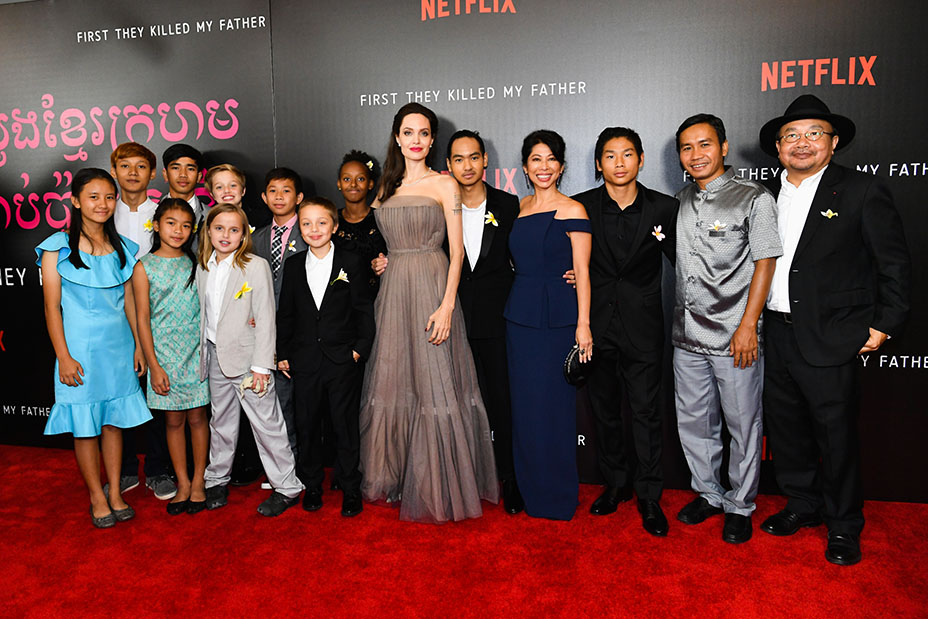