Continue to The Hollywood Reporter SKIP AD
You will be redirected back to your article in seconds
Skip to main content
May 9, 2019 12:10pm

Extremely Wicked, Shockingly Evil and Vile is about notorious serial killer Ted Bundy. But the Netflix film, starring Zac Efton as Bundy, doesn’t recreate the gruesome killings. For those disturbing details, viewers would have to watch director Joe Berlinger’s other recent Netflix project, the true-crime doc Conversations with a Killer: The Ted Bundy Tapes.

Instead, Extremely Wicked, Shockingly Evil and Vile — which takes its name from the infamous words spoken by trail judge Edward Cowart (played by John Malkovich in the film) during Bundy’s death sentencing — flips the perspective to show Bundy from the vantage point of his longtime girlfriend Elizabeth “Liz” Kloepfer, played by Lily Collins.

Liz never saw Bundy as the evil killer that he was when they were together and Extremely Wicked aims to capture that story.

“I was compelled by all of the mundane domestic details of his life and I thought an interesting way into a serial killer’s story would be to show no serial killing at all. I wanted to explore the love story of it all,” Michael Werwie, the film’s writer, told The Hollywood Reporter at the recent Tribeca Film Festival premiere of Extremely Wicked. “This is more of a human side of the story. It’s about the people who had an emotional connection to Ted Bundy. This is about seduction, betrayal and it’s also about the truth. The emotional side of the story is what makes the movie different than the documentary.”

Werwie wrote Extremely Wicked as a spec script nine years ago. After making The Black List, the feature treatment made its way to the Emmy-winning documentarian, who was already at work on Conversations With a Killer (which released on Netflix in January). Once the actors were attached, the producers raised financing at the 2017 Cannes Film Festival and Extremely Wicked went into production shortly thereafter.

The real Liz wrote a memoir about her life with Bundy, The Phantom Prince: My Life with Ted Bundy, written under her pseudonym Elizabeth Kendall, in 1981. Berlinger reached out to Kloepfer before they started making Extremely Wicked and she agreed to meet with the director and star Collins.

“Obviously, she has mixed feelings about putting her life story on the big screen but she was open to meeting with us,” Berlinger told THR, explaining how Kloepfer’s input helped them to feel they were on “the right track” with the film.

“At one point, we’re going through photo albums — these classic ’70s albums with the square photos and the date at the bottom — and I felt like I was looking at my own teenage family photos because there was this happy family unit of a father figure, a mother and a daughter going camping, skiing and having birthday parties. But the dude was Bundy,” he said. “There were hundreds of photos. And that for us crystallized our vision for the film. Because Elizabeth is a smart woman and she was blind to the obvious serial killer she was sleeping with. She had a whole life with this guy. A positive life. And it made us realize that we were on the right track, that it was important to tell this story from this perspective.” 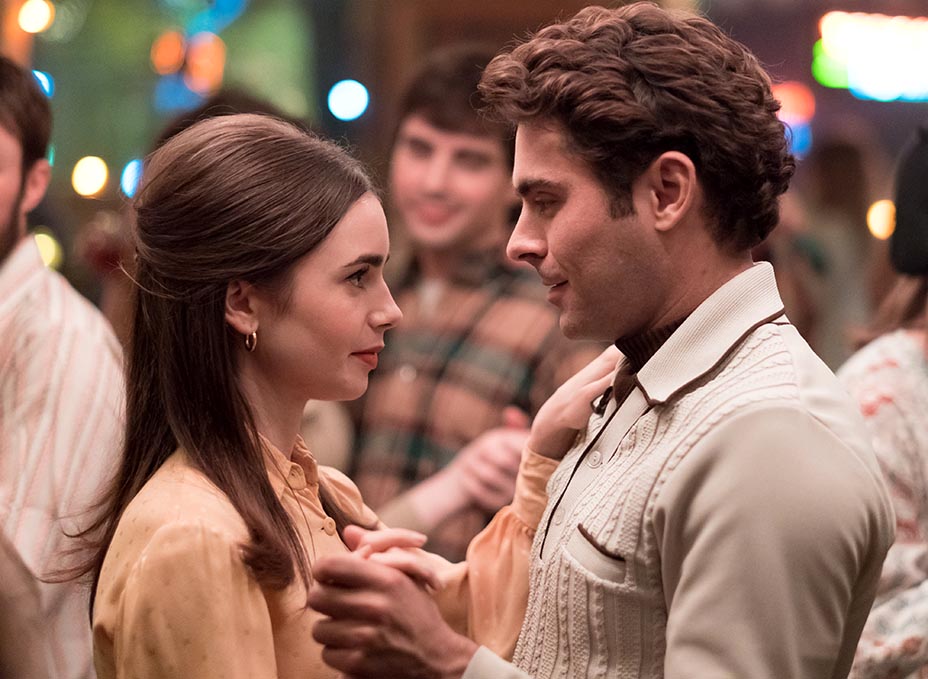 Extremely Wicked charts the love story between Bundy and Liz, a single mother, who met at a bar in 1969, right around the timeframe that Bundy is believed to have begun killing. The film captures their first night out and though Liz is shown initially having hesitations about a strange man sleeping in her house with her daughter, the pair go on to fall in love and live out many of the images described by Berlinger from Kloepfer’s photo albums.

Both Kloepfer, who also visited set, and Conversations with a Killer were resources for the cast. “I know when I talked to Liz that she was finally ready to tell this story,” Efron told THR. “So with respect to her and all the victims of Ted Bundy, we wanted to portray a story that was honest to what happened that was not glorifying Bundy. I’ve always been hesitant to play a serial killer or any killer of women because I’m not into glamorizing that sort of thing. But Joe Berlinger helped make this from Liz’s perspective and he also made it from the world’s perspective to show what it was like to be there in the moment.”

While Berlinger had access to all these Bundy materials, it was important that the goal of the two projects stayed separate. “We never wanted to make that movie because for us, this was really about how charming this guy was,” producer Michael Simkin told THR of the documentary serving as a counterpart to the feature film. “How deceptive and how someone so evil could be hiding really in plain sight. If we went in the direction of any of those terrible things, you can’t have both. He’s pure evil. But if you don’t understand how he was able to seduce and manipulate and trick very intelligent, powerful women, then I think you’re doing the women a disservice. Because the reality is that a lot of these victims willingly went with him and these were strong, intelligent people.”

Berlinger added, “Conversations is much more of a clinical dissection of the terrible things he did. This movie is an emotional unwrapping of the level to which he was able to deceive, not just Elizabeth Kloepfer, but the American media that kind of made him into a perverse folk hero and the American judicious system.”

Once Bundy is ultimately incarcerated in 1976 (he would go on to escape twice), Liz’s point of view fades more into the background as she is forced to watch the trials play out like many other Americans who tuned into the nationally televised Bundy events. That is when Bundy’s story takes over in Extremely Wicked, as he is shown defending himself in court and in media interviews — as the film recreates famous news footage — and reconnecting with Carole Anne Boone (played by Kaya Scodelario), the woman he would go on to marry, and have a child with, while he was on trial for the murder and assaults of four co-eds.

Though he would later admit to 30 murders before his execution (the total number is unknown and believed to be much greater), Bundy was ultimately only convicted of three killings in the two separate trials in 1979 and 1980. He was executed by the electric chair in 1989. 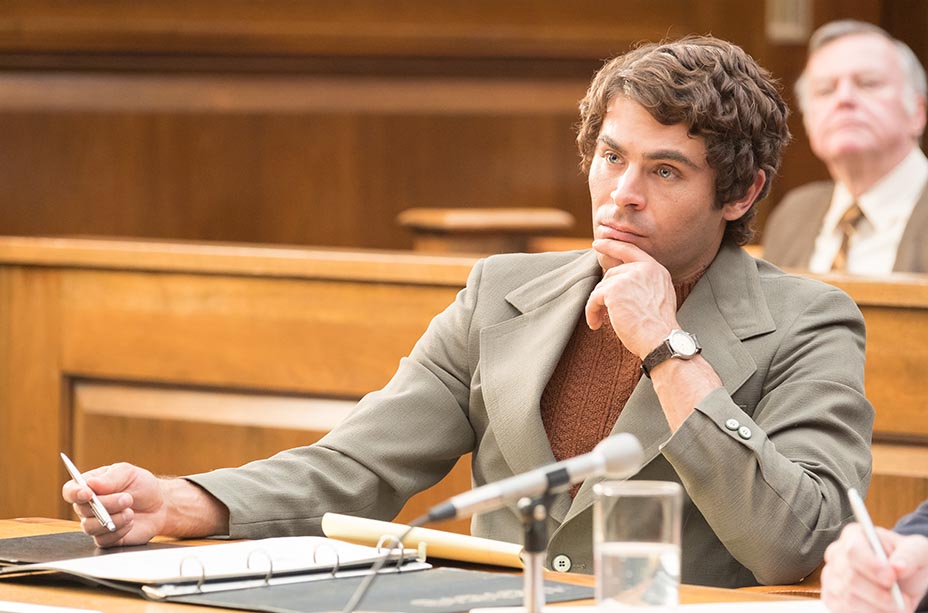 “Bundy was very much not a social outcast. He was integrated into society. He had lots of friends who defended him who said, ‘He can’t be a serial killer.’ He eluded capture for so long because people just didn’t see the clues,” said Berlinger of Bundy, whose killing spree spanned at least a decade and yet acted as his own defense attorney in trial. “The guy was allowed to escape prison because of lax security. Can you imagine if he was a person of color? He’d be wrapped in chains, he’d be in an orange jumpsuit. The fact that he was allowed to defend himself in trial? He made a mockery of the justice system, in my opinion, because of how he looked and acted.”

The director continued, “Even when he’s on trial for murder, the judge is almost embarrassed to be sentencing him to death. In the movie, we hear John Malkovich say, ‘I wish you went another way. partner. You would have been a good lawyer.’ Actually, he would have been a shitty lawyer, I think. But the judge is almost apologetic. If this was a person of color, at the moment he’d be sentencing him to death, he’d be wrapped in chains in an orange jumpsuit and the judge would be throwing the book at him.”

In the end, the film circles back to Liz’s perspective when she has a final conversation with the man she once loved shortly before he is executed. While the filmmakers took some dramatic liberties with the “hacksaw” scene — the faceoff did not come in person while Bundy was on death row, as is shown, but was instead a phone call — Bundy’s admission of his guilt to Liz, for the first time in their long courtship, is true to what happened in order to preserve the “emotional truth” of their story, says Werwie. Now, in the #MeToo era, that ultimate confrontation between Bundy and Liz “can apply to a lot of people who have had their day in court in recent years,” says the writer. “Ted Bundy could be seen as the arch villain of a movement that should have began decades earlier. He is that monster.”

The faceoff comes after the film’s big twist reveal of Kloepfer’s involvement in Bundy’s initial arrest years ago. As for what the ending scene represents, Collins tells THR, “We needed to show her all these years later grab on to her voice and use it in a way that says: You have to let me go, because I deserve more. I deserve you to let me go.”

She added, “It was a great moment for us to use for Liz, because you do see her being strung along through these court cases. She loves the man and doesn’t want it to be true, but after she finds everything out, she needed that moment of being strong and standing up for herself. She deserved it after all that time.” 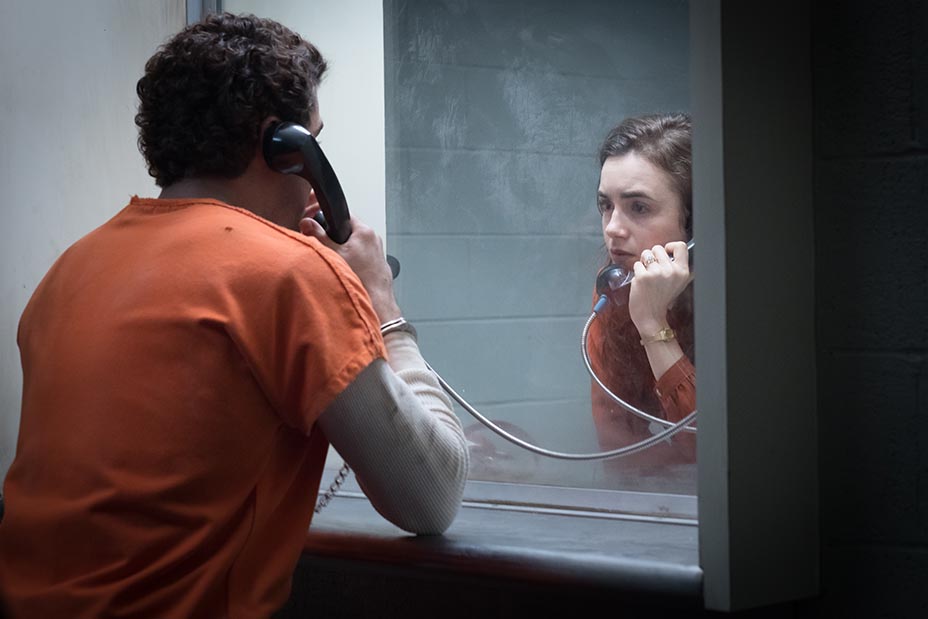 Despite her hesitations, Collins says Kloepfer was more forthcoming than she anticipated during their time together. “I think I was expecting someone that seemed more outwardly affected by everything and that might have been more quiet with me, and yet she was so giving of her time and so willing to answer questions,” said Collins. “She brought photos and letters. She was very clued in with me. I felt like I was going to have to ask more and she was just so giving.”

Still, the actress isn’t sure if Kloepfer or her daughter will end up watching the film. “She visited set when we were filming a happier time between her and Ted,” she added. “If she were to see it, I would hope that she’d know that I was as respectful and loving as possible, but I can more than understand it being beyond sensitive.”

Whether or not the film truly captures the story from Liz’s point of view will be up to viewers to determine. And whether or not Bundy — a sociopath who was “extremely wicked, shockingly evil and vile” — was capable of love is a central question posed by the filmmakers. “It goes into it from a love story and it asks, is this love real and can it be real?” said Werwie. “There’s no right answer to that and I think that’s an interesting debate to be had after you watch the movie.”