The four male characters in Falsettos, the joyously funny, shatteringly sad 1992 chamber musical forged out of two earlier one-acts by composer-lyricist William Finn and co-writer/director James Lapine, spend a lot of time trying to figure out how to be men. At a moment when election ugliness has pushed Americans of both genders to take a long, hard look at the male psyche, that might sound like more of an onerous thing. But the endearing awkwardness, the confusion and self-doubt with which this show’s characters tackle that question makes it a pleasure to accompany them as they wrestle with their masculinity.

In fact, pretty much everything about Lincoln Center Theater’s ideally cast Broadway revival, again directed by Lapine with as much humor as sensitivity, makes it pure pleasure. The musical is firmly knotted to its era, unfolding first in 1979, as New Yorker Marvin (Christian Borle) bails on his wife Trina (Stephanie J. Block) and son Jason (Anthony Rosenthal) to move in with his gay lover, Whizzer (Andrew Rannells); it then jumps forward to 1981, the dawn of the AIDS crisis, chronicling how this nontraditional family unit has expanded and then how it gets clobbered by the devastating reality of the time. But the characters are so fresh, the writing so emotionally insightful and the situations played with such feeling that Falsettos hasn’t aged a day.

A large part of the ingenious, sung-through show’s durability is the generosity of spirit and affection with which the writers approach every last one of their imperfect characters. In the first act, in particular, Marvin is a selfish jerk. That’s not because he embraces his sexuality and exits his marriage, while still wanting to keep his wife and son close in a “tight-knit family,” but because he reacts with irrational jealousy when Trina attempts to rebuild her own happiness in a new relationship with Marvin’s shrink Mendel (Brandon Uranowitz). Marvin’s behavior toward Whizzer also is questionable. He understandably balks at his handsome, younger mate’s disdain for monogamy, but is obnoxious when he asserts that being the breadwinner gives him the right to confine Whizzer to the pretty-boy homemaker role.

It’s a testament to the writing and performances that we continue to care deeply about whether these two will work it out. Borle has mostly been seen on Broadway in lip-smacking broad-comedy roles, winning Tonys for Peter and the Starcatcher and Something Rotten! So it’s a refreshing change to watch the actor, in superb voice, explore a more subtly nuanced, conflicted characterization, his anger at times becoming explosive. When, after breaking up in the first act, Marvin and Whizzer get back together in the second, Marvin sits up in bed alongside his sleeping partner and sings about being “revised” in “What More Can I Say?” It’s an exquisite song about love’s surprises, and Borle’s emotional transparency makes his character’s evolution in that moment intensely moving, setting up the musical’s shift into tragedy.

Rannells also is terrific. Whizzer initially appears untroubled about being perceived as a well-packaged lightweight, but the actor quietly affirms the intelligence and the roiling undercurrents beneath his character’s glib surfaces. Whizzer’s connection with Jason in their scenes together is beautifully drawn, as are the courage, the defiant dignity and the acceptance of his heartbreaking song, “You Gotta Die Sometime.” 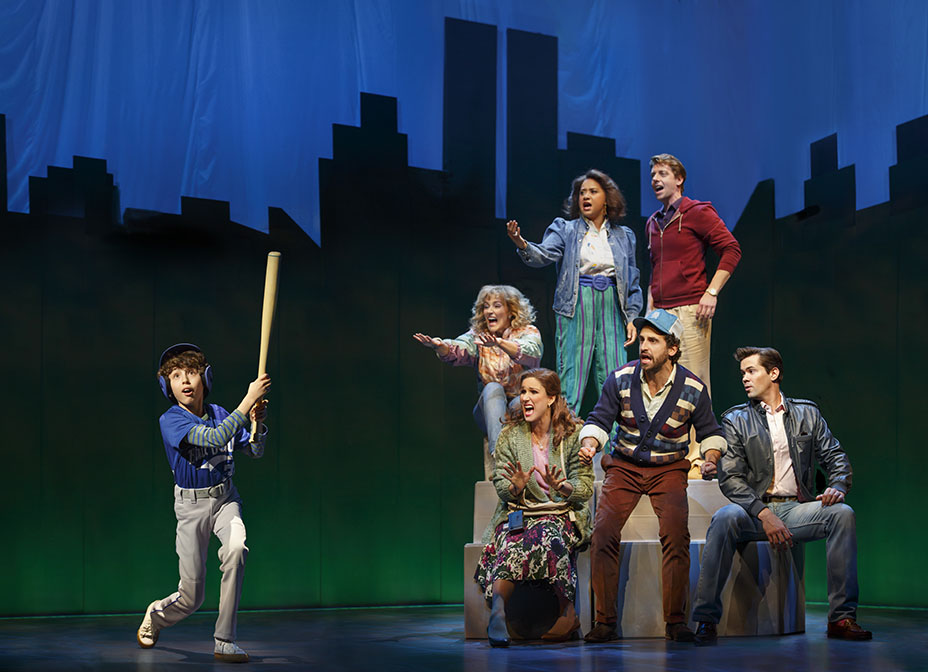 The production’s spectacular revelation, however, is Block. In addition to a powerful voice, she brings to the role such warmth, self-deprecating humor and frazzled sexiness (that in itself is an achievement for anyone wearing the late-’70s fashion crime of rust culottes and a mustard cardigan) that her every number is a showstopper. In a gorgeous take on “Trina’s Song,” she complains, “I’m tired of all the happy men who rule the world,” bemoaning their immaturity while berating herself for loving them. Her giddy implosion, “I’m Breaking Down,” delivered while preparing a banana and carrot surprise, may be the funniest musical performance currently on Broadway. And in “Holding to the Ground,” she sings with melancholy honesty of trying to stay true to a life in which the rules keep changing on her. Trina is the moral center and in many ways also the plum role in Falsettos, her fondness for the man-babies in her life battling with exasperation and needy resentment at every turn.

Preteen chess nerd Jason — preparing for a bar mitzvah that his parents feel more strongly about than he does — often seems the most adult of them. Rosenthal more than holds his own amid the seasoned company, his musicality and grasp of character equally impressive. And Uranowitz is a worthy successor to the wonderful Chip Zien in the original production. He flirts with the stereotypical view of a Jewish therapist only marginally less messed-up than his patients, while also finding the truth in a compassionate man who has to convince himself of his right to be happy.

The struggles of the four men in the show to define themselves are articulated with daffy wit by Finn in the psychological burlesque, “March of the Falsettos,” in which they don phosphorescent propeller hats, shorts and high-tops, stomping about the stage under black light, trapped in a surreal eternal adolescence. That theme of men trying to grow is a major thread throughout, in observations both funny and poignant.

Rounding out the picture in the second act is the lesbian couple next door. Cordelia (Betsy Wolfe) is the “shiksa caterer,” tirelessly working to perfect her nouvelle bar mitzvah cuisine, while spiky hospital internist Charlotte (Tracie Thoms) experiences a radical shift in her work environment once AIDS patients start appearing, conveyed in the song, “Something Bad Is Happening.” For a musical hatched during the epidemic, it was quite daring to have a doctor sing, “Bachelors arrive, sick and frightened/They leave weeks later, unenlightened.” And while advances in HIV treatment now make this play more like history than actuality, the treatment still packs a dramatic punch.

Finn’s score matches its emotional breadth with a corresponding adventurousness in terms of style, from the tongue-in-cheek vaudeville of “Four Jews in a Room Bitching,” or the hilariously twisty wordplay of “The Baseball Game” (during which the cast sings: “We’re watching Jewish boys who cannot play baseball play baseball”) to stirring ensemble numbers like “Days Like This I Almost Believe in God” or the show’s final, heart-rending duet, “What Would I Do?” Delicate melodies surface like throwaways from more abstract compositions, and yet they linger on in the head, often blending jauntiness with sorrow. The lyrics make you constantly marvel at the ability to combine clever humor, complex phrasing and searing tenderness. And under musical director Vadim Feichtner, the compact band finds all the depth and vitality in Michael Starobin’s lovely original orchestrations.

Despite its specific evocation of a time and place, and its intensive forays into Jewish identity (an aspect often playfully echoed in Spencer Liff’s choreography), the beauty of Falsettos is its timeless relatability. In the end, it’s about a family divided but bound together forever by their fumbling love for one another. That theme resonates even more in the post-gay marriage era, when the belief that only one traditional family model is sacred has been so thoroughly debunked.

David Rockwell’s set — dominated by gray felt-covered building blocks that are endlessly reconfigured, like preschool furnishings — may not make this the most attractive production, but as we watch these ineffably human characters lug those clunky elements about while they work to build, dismantle and rebuild home, life and love, the design is also somehow perfect.