As this year’s San Diego Comic-Con demonstrates that genre entertainment retains its stranglehold on pop culture at large, a new Hollywood Reporter/Morning Consult survey confirms what many have long suspected: When it comes to fandom, it’s Marvel’s world and everyone else is just living in it.

A nationally representative sample of 2,200 adults carried out between July 8 and 10 revealed that, when it comes to genre properties, Marvel is far and away the most successful, with 63 percent of those surveyed considering themselves fans. The next most popular property was Marvel’s Disney sibling, Star Wars, with a 60 percent fandom, and DC followed with 59 percent.

Just as interesting were the placements of brands that accepted wisdom — or media coverage — would have predicted top the poll: With 37 percent of those polled describing themselves as fans, The Walking Dead falls beneath Star Trek (49 percent) and Lord of the Rings (48 percent), and Game of Thrones had only 24 percent of poll respondents calling themselves fans, ranking lower than the BBC’s Doctor Who (24 percent).

Marvel’s dominance of pop culture was underscored by the fact that it was named as the fandom most likely to be shared by those identifying as fans of every other property polled, with even “pop culture” as a whole scoring lower than the Avengers and Iron Man studio.

In a move certain to confound those eager for a superheroic showdown, the property Marvel fans have the greatest crossover with is the DC universe, at once unsurprising — both Marvel and DC are telling superhero stories, after all — and, again, pushing against the conventional take that the two studios are at either side of a pop culture war that has ranged from the comic book store to the multiplex and back again.

Elsewhere, the poll showed the current state of mainstream fandom at large: A community that embraces superhero movies (62 percent of respondents classified themselves as a fan) and movies based on comic books (58 percent were fans), but not comic books themselves, with only 37 percent of those polled calling themselves fans. 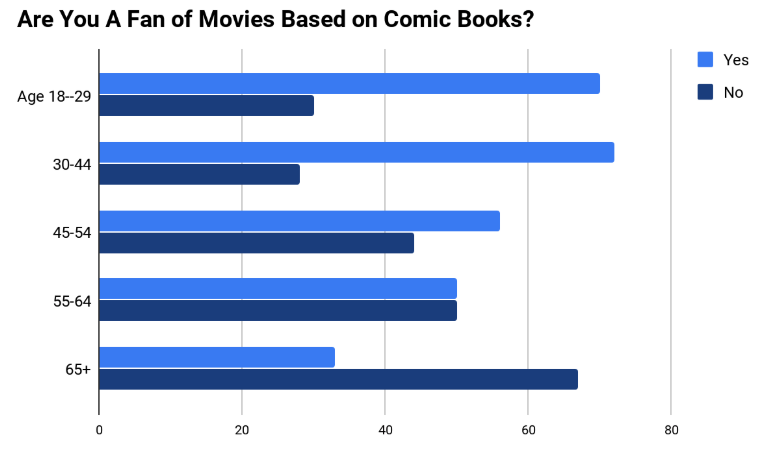 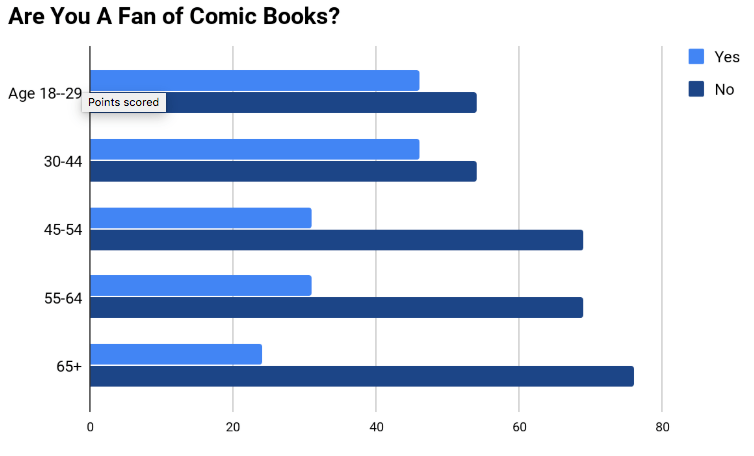 It’s also not a community that takes part in cosplay, apparently, or at least admits to doing so; only 13 percent said they had dressed as characters from movies, books, comic books or video games.

Perhaps most worryingly for Comic-Con International as an organization, only 21 percent of those taking part in the survey were aware of this year’s San Diego Comic-Con, and only 32 percent would consider attending a convention for a fandom they belong to.

More than half of those asked would consider attending conventions for either the chance to meet movie stars or writers (54 percent of those participating in the poll) or to receive freebies such as T-shirts or tote bags (52 percent), with 47 percent more likely to attend if there was an opportunity to view exclusive clips or trailers for upcoming movies and TV shows.

Of course, all of the above is available at San Diego Comic-Con, perhaps raising the question of what other outreach needs to be done to raise awareness amongst the general public for the show — although, with the annual event perpetually selling out the 125,000- capacity San Diego Convention Center, perhaps that’s not quite the problem it would appear to be at first glance.

San Diego Comic-Con runs through Sunday, July 21, offering appearances by movie stars and writers, free swag and exclusive footage of upcoming movies and television shows. What will really catch everyone’s attention, however, will be Marvel Studios’ Hall H panel Saturday evening. It is, after all, Marvel’s world.