While movie audiences have lately caught on to the mercurial brilliance of Mark Rylance in films like Bridge of Spies and Dunkirk, Broadway has been in on the secret for close to a decade, making every one of this extraordinary stage actor’s appearances a bona fide theatrical event. He played the clueless patsy in the slapstick farce Boeing-Boeing; an obnoxious theatrical windbag in the mock-Moliere verse comedy La Bete; a brawling modern-day dragon-slayer in the epic eulogy for Englishness, Jerusalem; and in an unforgettable double-bill from Shakespeare’s Globe, he delivered a fluttering, ineffably human Olivia in Twelfth Night alongside a Richard III whose toying duplicity quivered with blackest resentment.

His return to New York comes courtesy of another production that originated at the Globe in London (where Rylance served as artistic director for 10 years), in a play written by his wife, the composer and historical music scholar Claire van Kampen. A thrilling hint of madness matched with insouciant wit has been a signature characteristic of Rylance’s stage work, which makes the ailing monarch in Farinelli and the King a tailor-made fit.

If the play is structurally shaky and thematically a tad thin, John Dove’s exquisite staging yields compensatory rewards. Not least of these is the chance to hear countertenor Iestyn Davies perform a number of baroque opera arias by Handel, in what’s probably as close as possible to the castrato sound without using a boy singer or mixing in a soprano. (James Hall sings the role at some matinees.) And like the Twelfth Night/Richard III double, the evocative facsimile of original-practices staging — period instruments played by musicians in an upper gallery onstage, no amplification, candles favored over electrical lighting, richly detailed costuming using authentic materials — provides a great deal of pleasure.

The play’s effective solution to finding an actor who can portray a complex character while nailing uncommonly demanding vocal challenges is to split the role in two. Sam Crane appears as Carlo Broschi, better known as Farinelli, the Italian castrato who became a sensation in the opera houses and concert halls of 18th century Europe. He is lured to Spain by Isabella Farnese (Melody Grove, the essence of warmth and poise), the protective second wife of the clinically depressed King Philippe V (Rylance), in effect making Farinelli a private employee of the royal court and prematurely ending his career. 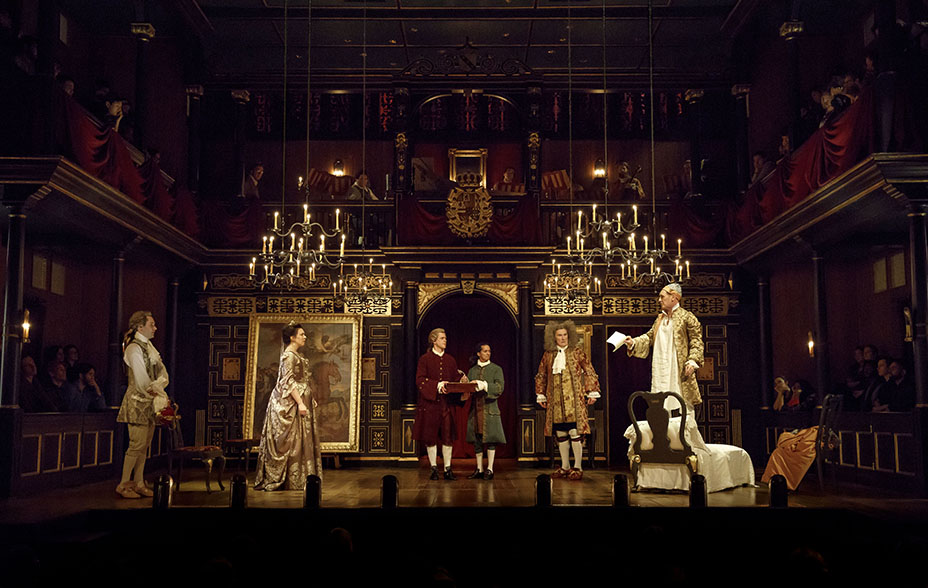 Just as the bipolar King is torn between duty and a role thrust upon him in his youth (he was the grandson of France’s Louis XIV, after all), so is the pensive Italian singer a man divided, his body cruelly mutilated at age 10 to retain vocal purity, make money for his family and achieve fame that he never desired. That makes the physical duality quite affecting when Davies steps out alongside Crane, identically costumed and wigged, and launches into transporting song. An introspective young man with great depth of feeling and seemingly very little ego, the character presented here is quite unlike the one in the glossy 1994 European biopic Farinelli, played by Stefano Dionisi as a strutting proto-glam-rock peacock, depicted chiefly during the years prior to the action of van Kampen’s play.

Rylance’s Philippe is first encountered alone in a nightshirt, fishing from a goldfish bowl while sharing existential reflections with its circling occupant. Interrupted by Isabella, he’s convinced he’s in a dream, suggesting he might climb into Jean Ranc’s famous equestrian portrait of him (a prominent feature of the set) and ride off into the night to go hunting.

While the Queen is patient and nurturing with her addled husband, even making excuses for him when his erratic behavior turns violent, others in Madrid see his feebleminded unpredictability as cause for urgent replacement. The chief minister, Don Sebastian De La Cuadra (Edward Peel), urges Isabella to return to her Italian homeland while he engineers her husband’s abdication, leaning on the royal physician Dr. Jose Cervi (Huss Garbiya) to back him up on the dangers of the King’s paranoid delusions. Instead, Isabella travels to London, where the ethereal sound of Farinelli’s voice convinces her that he might bring restfulness to Philippe’s troubled mind.

This is a potentially fascinating story, grounded in history, though with ample room for extravagant fictionalized flourishes. But while director Dove and expert designer Jonathan Fensom have crafted some gorgeous tableaux, the drama becomes borderline inert.

That weakness puts an undue burden on Rylance to pull out every entertaining trick (and tic) in his impressive arsenal — the hypnotic voice, the verbal and physical idiosyncrasies, the eccentric timing, the stuttering hesitation, the playfully mumbled asides, the subtle complicity with the audience.

The idea of music as a therapeutic balm for mental illness is a captivating one that still has relevance today, and there’s poignancy in the choice of a celebrated artist to renounce his fame and devote his gifts to the service of a figure who was just one step away from God in the thinking of that time. But once van Kampen has put Philippe and Farinelli together — in an enjoyably simpatico encounter during which the Italian recruit unexpectedly passes the still-wily King’s tests — she doesn’t really know what to do with them.

Hammy, pantomime-style performances from Peel as sour-faced De La Cuadra and Colin Hurley as the English theater impresario behind Farinelli don’t help with the lack of substance. Even the text’s use of anachronistic terms and random vulgarity often seems like a ploy for easy laughs to distract from the playwright’s failure to coax out her themes. 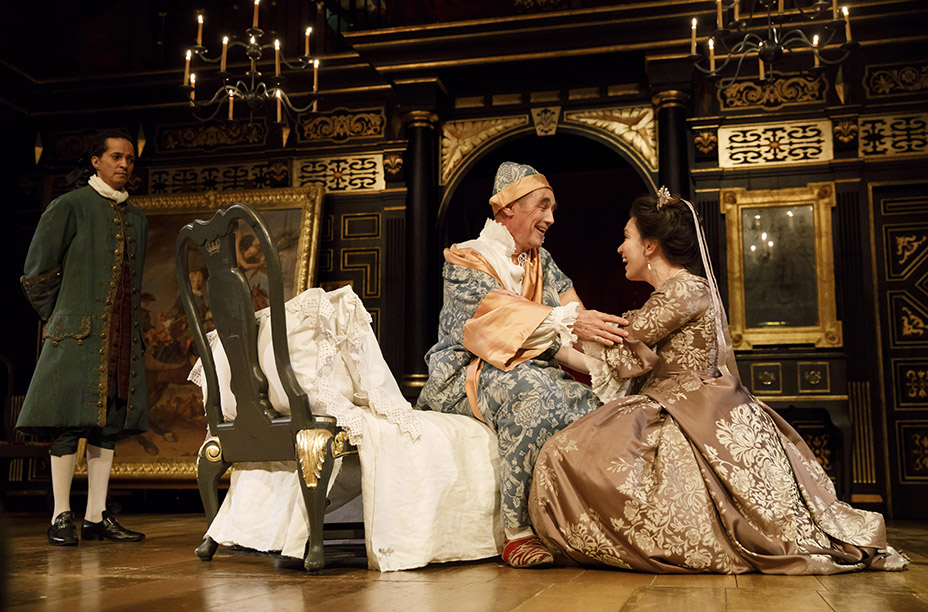 The second act is particularly unsatisfying as the rejuvenated Philippe insists on relocating with his wife and their guest to a forest retreat, where he can live a simplified existence, gardening and communing with the stars and planets while Farinelli sings directly to the heavens. There’s talk of the harmonics of music created between one vibrating celestial body and the next, a school of thought to which Dr. Cervi apparently subscribes. But all that waffling never amounts to much.

Nor is there sufficient tension when killjoy De La Cuadra starts pressing for an inevitable return to royal duties as the threat of a war with England escalates. That dramatic turn does inspire a moving stage picture, however, as the reluctant Philippe is kitted out and placed on horseback in a recreation of Ranc’s portrait.

Unlike in Alan Bennett’s play The Madness of George III, and its film adaptation, the deteriorating mental health of a monarch here doesn’t constitute a sustaining narrative arc, even if Rylance’s commanding performance remains the center of attention. (It’s certainly the main reason for the production’s Broadway transfer.) The more interesting thread is the motivation of Farinelli to keep extending his stay in Madrid, his love for Isabella becoming a contributing factor, and his refusal ever to sing in public again.

There’s a lovely scene in the forest between Carlo and Isabella, beautifully payed by Crane and Grove, that resonates in ways designed to suit the playwright’s reinterpretation of history. But rather than attempt to elucidate the singer’s life after Philippe’s death, and decisions that distanced the Queen, van Kampen instead jumps ahead to Farinelli’s retirement years in Bologna. Dramaturgically, this feels abrupt, though the conclusion is redeemed by Davies tender singing of Handel’s “Lascia, ch’io pianga” from Rinaldo, powerfully drawing out in music the sorrowful affinity between the castrato and the King.