Against the backdrop of coast-to-coast protests of Donald Trump’s executive order on immigration that went into effect this weekend, stars took to the red carpet for the annual Screen Actors Guild Awards on Sunday.

Many used their speeches during the show to air opinions about the ban of immigrants from seven predominately Muslim countries. On the red carpet, the fashion was both sober and spunky. The biggest takeaway was that the women — and many of the men — dressed like individuals; even those who wore the same designer looked distinct, as it should be in this age of self-expression.

One political sartorial statement came from Gwendoline Christie of Game of Thrones, who chose a black sequin jumpsuit by British designer and punk icon Vivienne Westwood, an environmental and human rights activist who has stood up to authority her entire career, including in 2015 driving a white army truck in front of then-British PM David Cameron’s house to protest fracking, and years before that, going without underwear to receive an award from the Queen.

“Vivienne is someone who has an activist mindset, which is something I appreciate at this moment,” Christie told E!

Viola Davis went with a Westwood classically draped, strapless white gown. “We are sticking with colors that symbolize optimism and hope and silhouettes that are clean, strong and simple,” Davis’ stylist Elizabeth Stewart told THR. Rashida Jones made three, choosing a sweet, red vine print Westwood gown that was different from the rest. 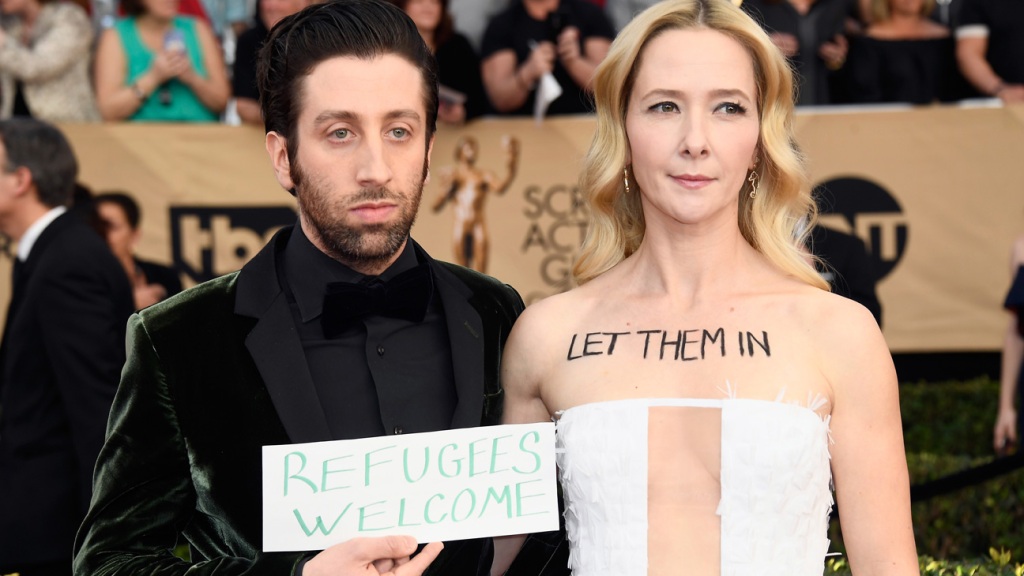 Kerry Washington made a statement by wearing a safety pin for solidarity on her white embroidered off-shoulder Roberto Cavalli dress, explaining her choice ahead of time on Instagram, and Big Bang Theory’s Simon Helberg and his wife Jocelyn Towne used themselves as canvases for the timely political messages, “Let Them In” and “Refugees Welcome.” 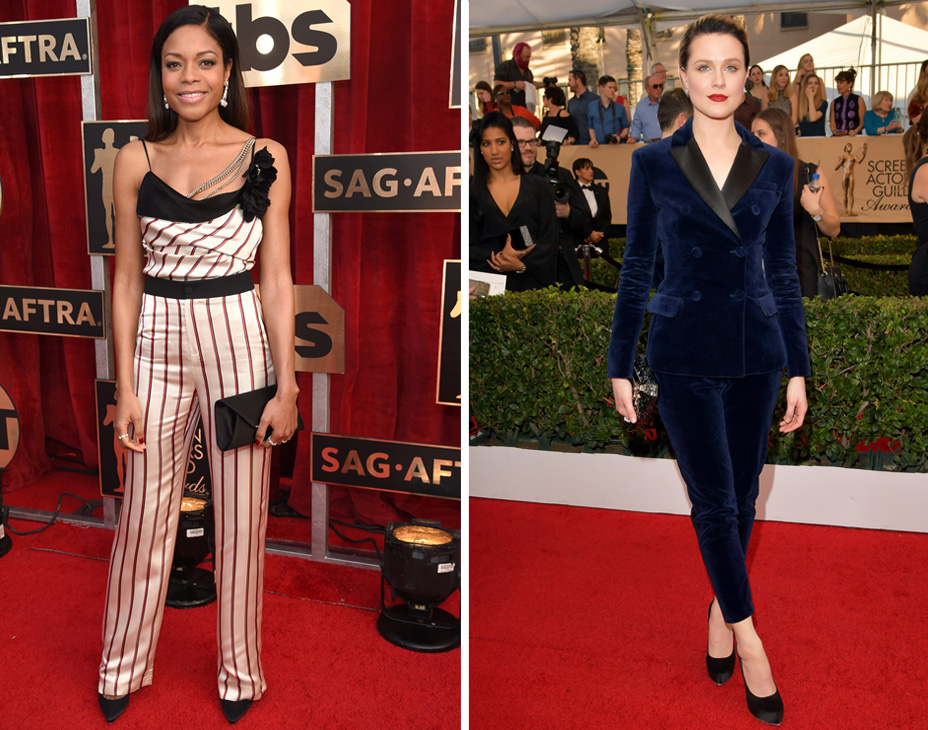 Candy stripes were a trendlet on the carpet, with Michelle Dockery in a cheerful Elie Saab, and Yara Shahidi in a multi-colored beaded Naeem Khan gown. 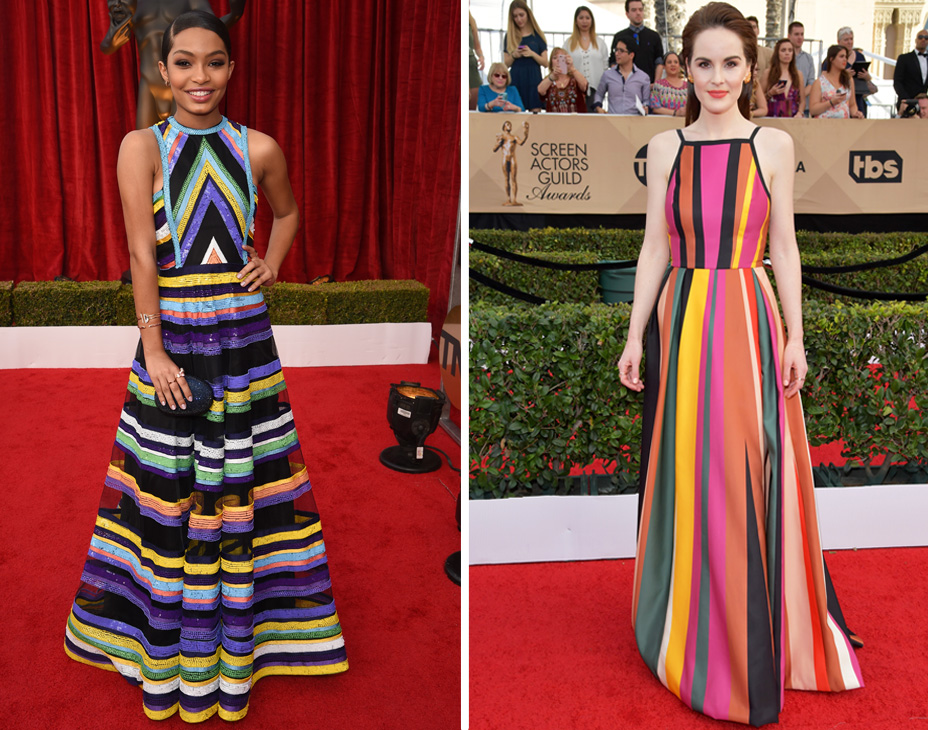 Sarah Paulson chose a sober-but-chic, tuxedo-inspired strapless black peplum gown by Vera Wang, one of several understated black dresses on the carpet, including Amy Adams’ Brandon Maxwell. (White was another dominant color, with both Kirsten Dunst and Natalie Portman in white Dior dresses.)

“It was a strong finish,” stylist Karla Welch said of Paulson’s black gown. The actress took home the SAG Award for her performance in The People v. OJ Simpson, and used her speech to highlight the work of the American Civil Liberties Union in fighting for inclusivity. 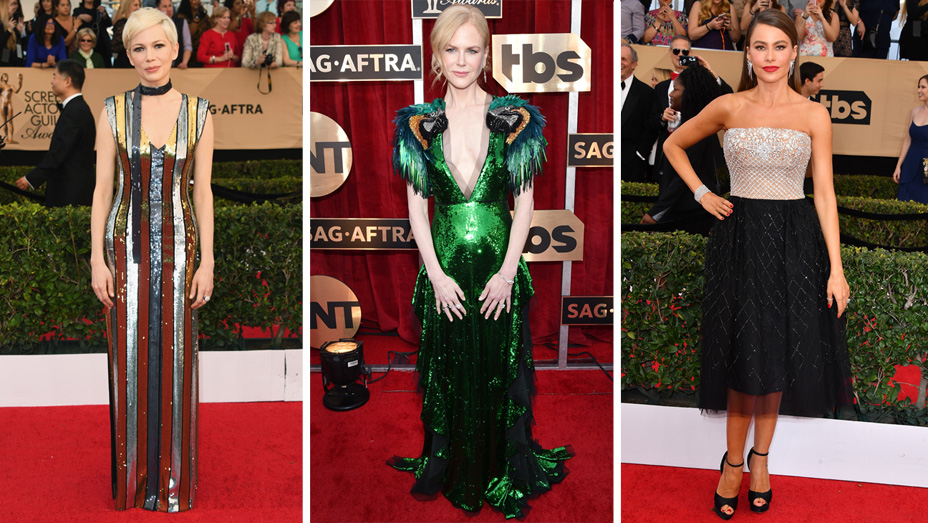 Sequin shimmer has been a popular effect this red carpet season. To that end, Gucci dressed Nicole Kidman in an maximalist emerald green gown with parrot and feather embroidered shoulders that seemed a bit much for the SAGs. Michelle Williams chose a metallic sequin stripe Louis Vuitton gown and skinny scarf that, with her cropped haircut, brought to mind Edie Sedgwick and the Velvet Underground era. And Sofia Vergara went with a new silhouette — for her — to great effect. No deep cleavage, no fishtail hem, just a Zuhair Murad tea-length dress with silver-embroidered strapless bodice and black tulle skirt. Vive la difference!