Lady Gaga has been heating up the red carpet with her movie star gowns these past few months, from the feathered flamingo-pink Valentino stunner she wore at the Venice Film Festival to the dripping silver Givenchy she stepped out in for the Los Angeles premiere of A Star Is Born. All of her red carpet looks have been radiating Hollywood glam.

But on Monday, for Elle’s 25th annual Women in Hollywood event, Gaga chose an oversized Marc Jacobs suit. Why did she opt for the menswear-inspired look instead of her usual sparkly style? She wanted to make a feminist statement.

Gaga said she tried on several dresses from Dior, Rodarte and Calvin Klein in preparation for the gala, but chose the power suit because “I felt like me.” Gaga wanted to prove that women in Hollywood are not just “objects” to entertain others, but have their own voices to speak out, as she did about her own sexual assault experience. “Today I wear the pants.”

“As I tried on dress after dress today, getting ready for this event, one tight corset after another, one heel after another, a diamond, a feather, thousands of beaded fabrics in the most beautiful silks in the world … to be honest, I felt sick to my stomach,” Gaga said at the ceremony.

“And I asked myself, ‘What does it really mean to be a woman in Hollywood?’ We are not just objects to entertain the world. We are not simply images to bring smiles or grimaces to people’s faces. We are not members of a giant beauty pageant to be pit against one another for the pleasures of the public.

“We women in Hollywood — we have voices. We have deep thoughts and ideas and beliefs and values about the world, and we have the power to speak and be heard and fight back when we are silenced.

“So after trying on 10 or so dresses with a sad feeling in my heart that all that would matter was what I wore on this red carpet, I saw an oversized Marc Jacobs suit very quietly in the corner. I put it on to a resounding view of eyes glaring at me in confusion. ‘But the Rodarte was so beautiful!’ one said. ‘But the Raf Simons for Calvin Klein was so stunning on you!’ said another. ‘But what about Brandon Maxwell? What about the Dior?’ Lots of questions.

She completed the look with her grown-out hair pulled back and wearing her pink sapphire engagement ring, announcing she’s getting married to agent Christian Carino. 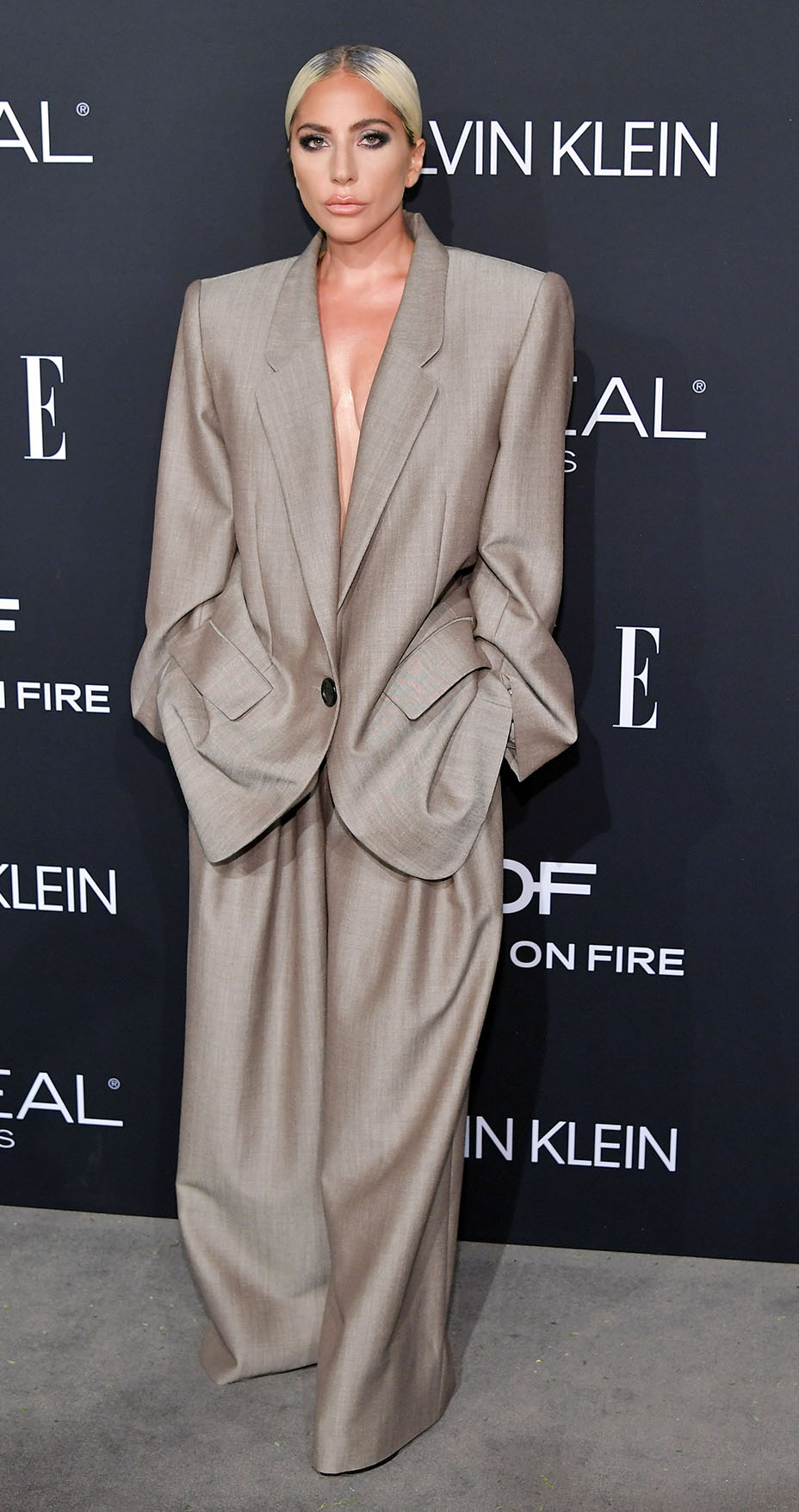 Gaga went on to speak about her experience as a sexual assault survivor, implying the more masculine suit was the only fitting choice for this moment in Hollywood’s #MeToo era. Politics have guided several recent fashion trends on the red carpet, including political pins and the all-black outfits worn by women at the Golden Globes.

Women’s suits have long-standing symbolism in the feminist movement, from the power-shouldered styles of the 1980s to Democratic presidential nominee Hillary Clinton’s Sisterhood of the Traveling Pantsuits. They can read as an asexual uniform, or a more sensual statement a la Helmut Newton. (Witness Blake Lively’s press tour looks while promoting her latest film A Simple Favor). Other Hollywood figures have moved beyond power suits, with Evan Rachel Wood and designer Joseph Altuzarra dismissing the term: “It’s like saying power is associated with dressing like a man instead of just feeling powerful in whatever you’re wearing,” Wood previously told THR. (Wood wore a hybrid of sorts — pants and a dramatic tuxedo jacket with train by Altuzarra — to the Emmys in September.)

After Gaga’s thoughtful break from her recent diva style, it will be interesting to see if she returns to gowns that make her feel like she’s in a “giant beauty pageant” or not. The 2018-19 red carpet season is still young.