If you are in Rome this spring, you may want to check out the interactive exhibition covering the first floor of the fashion house’s headquarters, featuring its best collaborations in cinema history, including a few that went on to win a coveted gold statue.

When Fendi celebrated its 90th anniversary in 2015 by moving into one of Rome’s boldest historic buildings, the fashion house decided it was the perfect time to open its doors to the public. Now holding court in the towering Palazzo della Civilta Italiana, nicknamed the square coliseum, Fendi has dedicated the space to a rotating series of exhibitions.

Fendi’s current exhibition, Fendi Studios, pays tribute to the seventh art, a perfect match for its new venue. The Palazzo has been a sought-after location in cinema, popping up in films from Rome, Open City in 1945 to most recently Zoolander 2 in 2016. And Fendi has designed costumes for more than 50 films and TV shows throughout the years, from Luchino Visconti’s 1974 film Conversation Piece, to most recently Paolo Sorrentino’s HBO series The Young Pope. 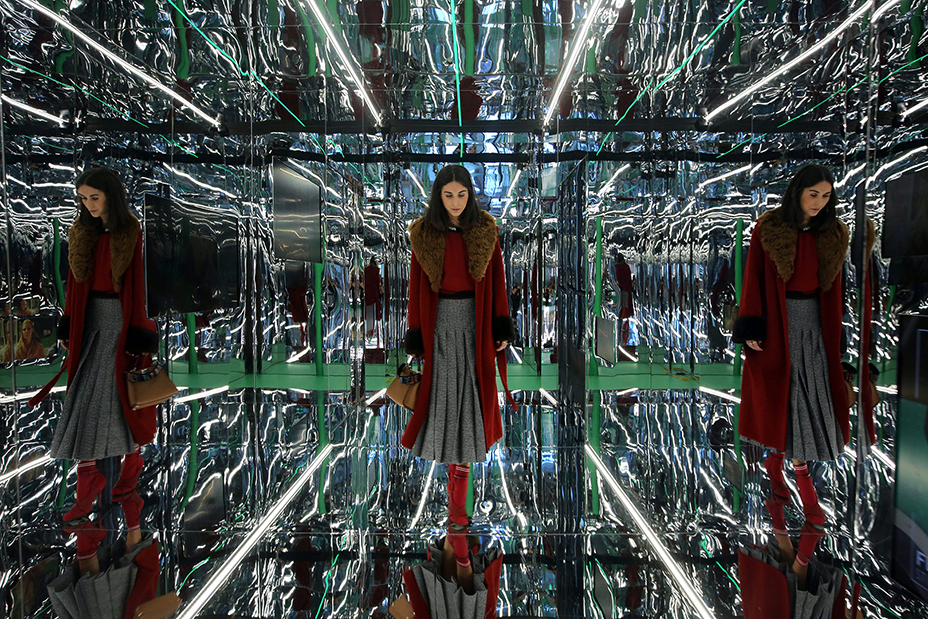 Fendi has worked with legendary directors throughout the years including Federico Fellini (And the Ship Sails On), Sergio Leone (Once Upon a Time in America), Ettore Scola (Le Bal), Liliana Cavani (The Berlin Affair), Francis Ford Coppola (The Godfather 3) and Michelangelo Antonioni (Eros).

The resulting exhibition combines green screen and interactive activities, making the small gallery a popular spot for Romans and tourists alike. Fendi is banking on the selfie generation to showcase its history by setting up the buzz-worthy installations. Already more than 3,000 photos on Instagram have been tagged #FendiStudios. 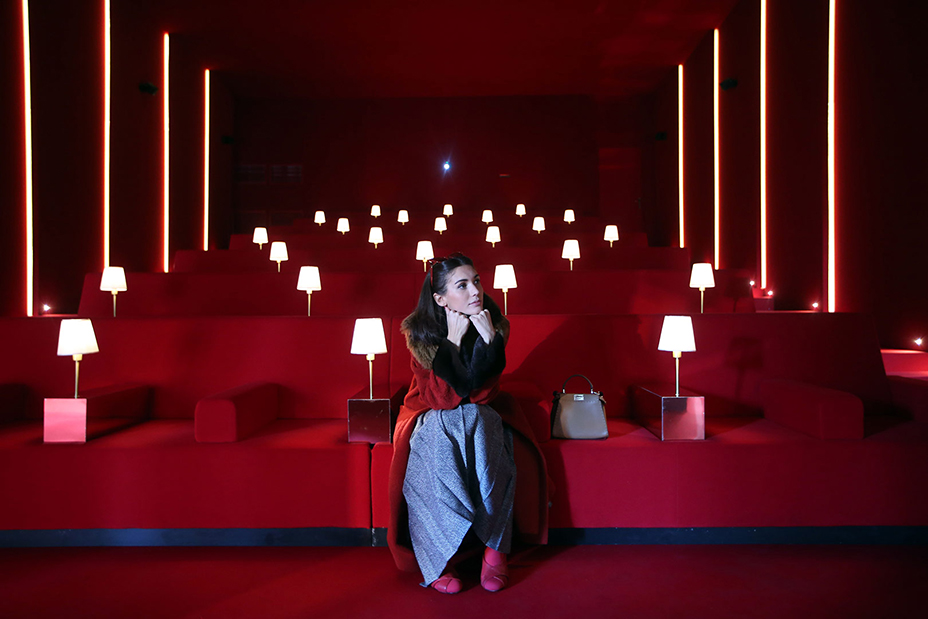 Visitors walk up the steps of the Palazzo, passing giant Carrara marble statues and into the main hall. A vintage ticket booth welcomes visitors. Inside paparazzo armed with Fujifilm Instax cameras photograph visitors and give them a memento to remember the experience.

First up is a room dedicated to famous car scenes in film. Visitors can sit in a glossy red vintage Alfa Romeo convertible and have their photos taken with a green-screened journey of Rome playing behind them.

Furs on display include the demi buff mink coat worn by Madonna in Evita and the billowing number Barbara Carrera wears as Fatima Blush in Never Say Never Again. The red draped lounge coat and matching swirled hat with black trim that Tilda Swinton wore in The Grand Budapest Hotel was just one of the looks that earned Milena Canonero her fourth Oscar.

Milan Fashion Week: At Fendi and Max Mara, Swagger for the #MeToo Moment

The next room pays tribute to New York scenes. A giant mirror projects visitors into a New York setting. Costumes include those coveted by Cate Blanchett in Blue Jasmine and worn by Michelle Pfeiffer in The Age of Innocence. Meryl Streep’s imperial getup in The Devil Wears Prada includes a maroon striped smoking jacket and a silver fur-covered Fendi Spy bag.

And it wouldn’t be a New York room without paying tribute to Patricia Field and her work on Sex and the City. On display is the famous To You bag, entrenched in feathers, which converts from a Hobo to a clutch. And of course there’s the infamous Baguette, designed to emulate how French women carry bread under their arms.

Carrie Bradshaw’s bag of choice helped make the Fendi Baguette once of the most in-demand accessories of the late ‘90s. On display is the original purple-sequin baguette that Carrie gets mugged for when she turns down a wrong street south of Houston. Not included in the show is the fake golden Baguette Samantha bought in Chinatown, which caused her to get kicked out of the Playboy Mansion after she accused a Bunny of stealing her bag. 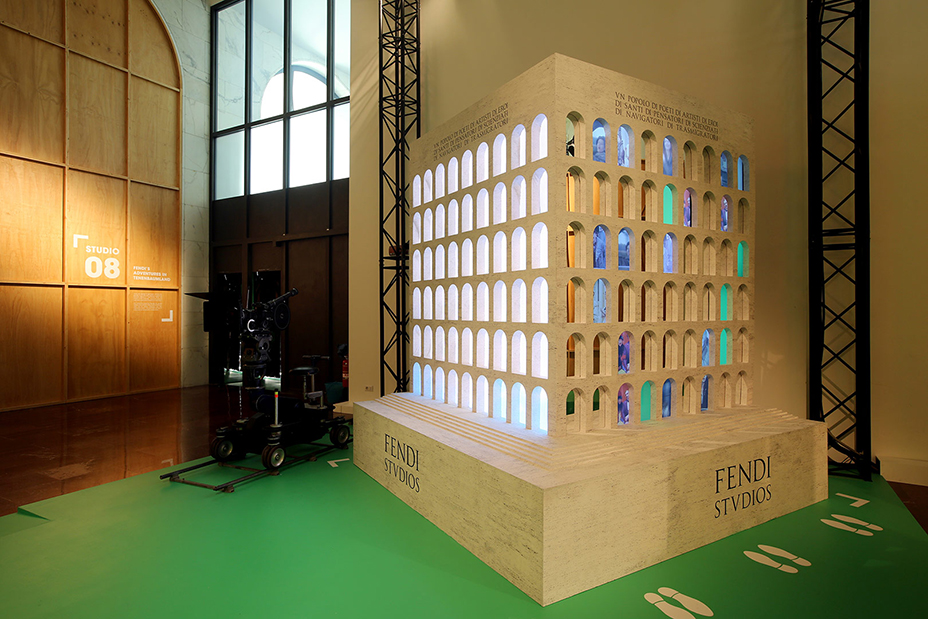 Imposing fur capes and animal-print jackets from Julie Taymor’s Titus also are on display, staggered against the back wall in between Greek pillars.

Next up, an infinity-mirrored corridor projects scenes from The Royal Tenenbuams. The caramel mink tie-waist fur coat worn by Gwyneth Paltrow became a best-seller for the brand after the success of the film. “Fendi sees the cinema as a possibility to put itself to the test in the field,” explained the fashion house in a statement on why it brought the popular coat to the runway after inspiring a generation of Margot Tenenbaum Halloween costumes.

An upscale lounge features some of the brand’s most over-the-top designs including pieces worn by Sharon Stone in Catwoman, A Golden Boy and Basic Instinct 2, Monica Bellucci in How Much Do You Love Me?, the Astuccio Fur Marisa Berenson wore in in I Am Love, and several more Bond Girl costumes from Die Another Day. 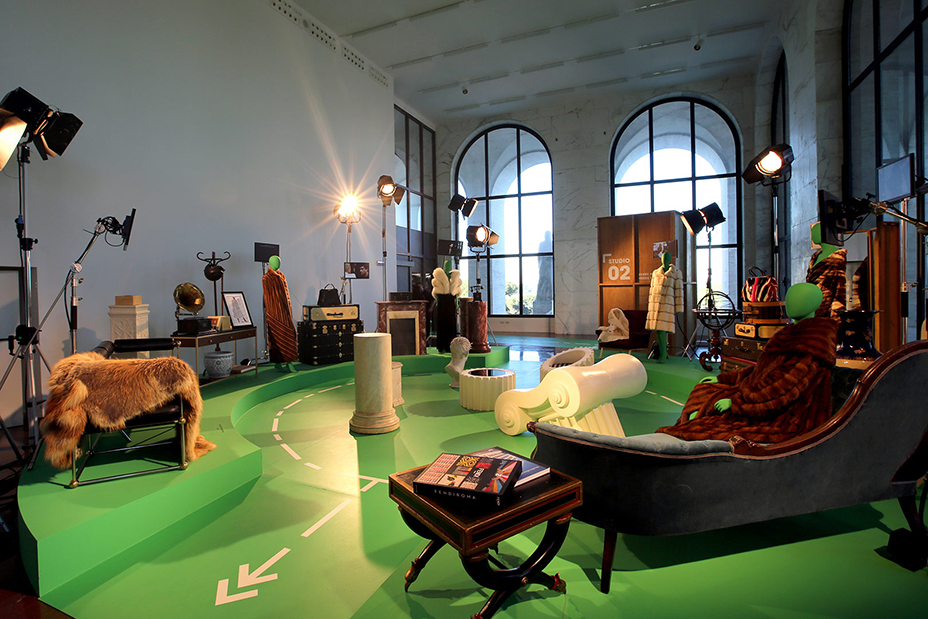 And finally, a temporary cinema installation also offers free nightly viewings of the many films featured in the show. Outside the theater it looks like a typical soundstage, but inside, rows of red armchairs are separated by individual golden lamps for an intimate movie-night experience.

The all-fur exhibition may have some influencers questioning the show’s timeliness, as fashion trends are increasing leaning toward faux fur. While major fashion houses like Gucci, Calvin Klein, Ralph Lauren, Tommy Hilfiger and Armani have all banned fur for good, Fendi, which built its empire on fur, is doubling down on its roots.

“Fendi is fur and fur is Fendi. Fendi has created and continues to create memorable furs for Italian, European and Hollywood cinema productions: Some are incredibly detailed representations of a specific moment in history, others are unscrupulously inventive and open to interpretation,” the design house said in a statement. “The focus, like always, is on creating.”

Fendi Studios runs through March 25. Tickets for the free film screening series can be booked online on a first-come, first-served basis. 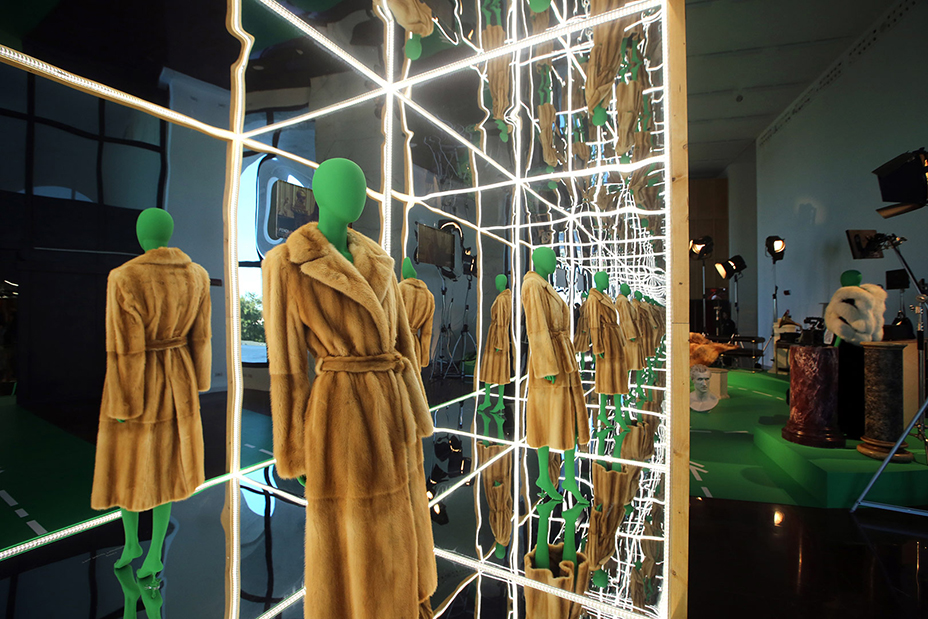