Just as Jez Butterworth’s rollicking 2009 State-of-England tragicomedy Jerusalem had sprawling roots in the ancient soil and mythology of that land, the dramatist’s gloriously entertaining new work digs deep into the blood-soaked earth of Northern Ireland. A crackling thriller woven into the vibrant canvas of a character-driven portrait of big-family rural communion, it positively thrums with life and love. The Ferryman reaches back from its time frame at the height of the Troubles to the Easter Rising of 1916 and beyond to the feuds of warmongering faeries in the folklore of centuries past, their deaths heralded by the howls of banshees.

This is a mighty play full of magic and poetry — of passionate people forged out of conflicts that rise up from history to shatter the idylls of the present; of disappearances both physical and abstract, that cast long shadows of grief; of enmity handed down across generations, turning boys into hate-filled would-be warriors; and of bittersweet yearning for loves destined to remain forever out of reach. But it’s also a work almost bursting with joy and celebration, with dance and song exploding out of fierce cultural identity, and with rambunctious humor and eccentricity.

Deservedly heaped with awards in London, Sam Mendes’ vigorously inhabited production now arrives in New York to shake up the Broadway season with tornado-like force. Its populous ensemble is a seamless unit, led with powerful feeling by Paddy Considine and Laura Donnelly, along with several other outstanding holdovers from the original London cast. But the newcomers are just as indispensable to this pulsing pastoral symphony, including a gaggle of delightful children who swear like truckers. There are 21 actors onstage — along with a baby, a bunny and a goose, all very much alive — and they have the spirited energy of a multitude. 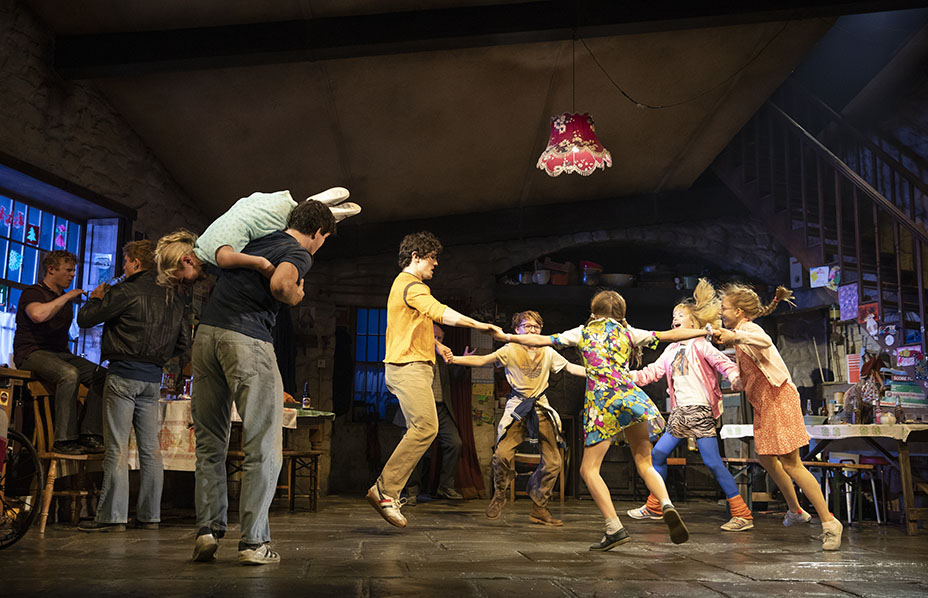 Set on harvest day in late summer 1981, the play unfolds in the large kitchen of the Carney family’s flagstone farmhouse in County Armagh, Northern Ireland. Scrupulously designed in life-giving detail by Rob Howell, it features kids’ paintings and craft projects tacked all over the walls and a faded Irish nationalist flag hanging over the staircase, with its golden harp on a Kelly green background.

The story revolves around grain farmer Quinn Carney (Considine) and his sister-in-law Caitlin (Donnelly), who was taken in by the family with her brooding son Oisin (Rob Malone), now 14, after her husband Seamus went missing on New Year’s Day, 1972. In a prologue we learn that the body of Seamus, an alleged IRA informer, has been found by turf-cutters buried in a bog with a bullet hole in his head. That discovery ends almost a decade of uncertainty for Caitlin, who had been led to believe her husband may still have been alive somewhere all those years.

With a menace that doesn’t even need to be put into words, IRA heavy Muldoon (Stuart Graham) and his goons strong-arm the Carney family’s parish priest, Father Horrigan (Charles Dale), into acting as a go-between. The headline-making deaths of Irish hunger strikers and the refusal of Margaret Thatcher to recognize them as political prisoners — her infamous “A crime is a crime is a crime” comment is heard over a radio news broadcast — have heightened international sympathy for the Irish republican cause. And the message Muldoon wants conveyed is that no comment will be made to the press about possible IRA involvement in the killing of Seamus. 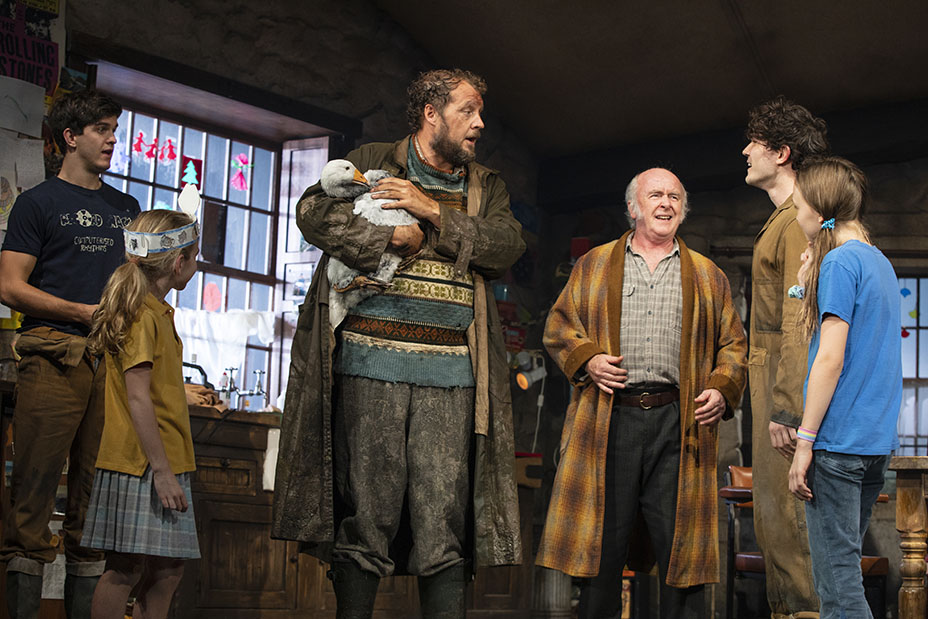 With a deft hand, Butterworth sets up the expectation that violence will reach the Carney farm before the harvest festivities are done, a threat foreshadowed in Nick Powell’s ominous music and sound design. But the dread changes shape repeatedly, keeping you guessing until the climactic bloodshed as to what form it will assume and who will be taken down.

The playwright and director — who worked together on the Bond movies Skyfall and Spectre, on which Butterworth served, respectively, as an uncredited script contributor and co-screenwriter — make skillful use of indirection throughout. They start by introducing Quinn and Caitlin in the midst of boozy late-night banter that leads into a blindfolded dance to The Rolling Stones, letting us assume they are a couple. But Quinn’s sickly wife Mary (Genevieve O’Reilly), mother of their seven children, is actually upstairs with the latest in an endless series of mystery viruses. Somewhat absent even when she makes an infrequent appearance downstairs, she recalls another ghostly theatrical Mary — of the Tyrone clan in Long Day’s Journey Into Night. Though what ails Mary Carney is not morphine addiction.

More vocal presences are Quinn’s aunt and uncle, the bickering Patricia and Patrick, both called Pat just to add confusion to the busy household. Aunt Pat (Dearbhla Molloy) is a hard-bitten battle-ax consumed by her hatred for the English since watching her adored older brother die at their hands back in 1916. Her put-downs of loquacious Uncle Pat (Mark Lambert) are priceless. He brings the same verve to every story he tells, usually over a glass of whiskey, whether it’s part of Carney lore or a myth from the Ancients. His dip into Virgil’s Aeneid, describing the Underworld boatman transporting souls across the River Styx, gives the play its title. 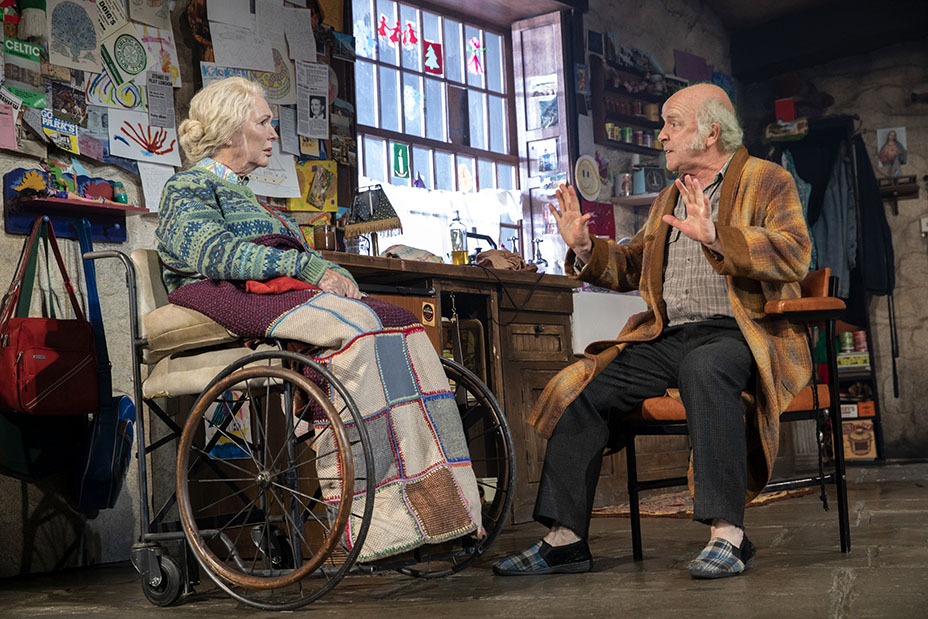 The girls’ older sister Shena (Carla Langley) just wants to turn 16 so she can run off to London to marry Adam Ant. Meanwhile, she sings David Bowie and Kim Wilde to baby brother Bobby, played by real alternating tots, one of whom had half the audience cooing on press night. Older brother Michael (Fra Fee) is an inveterate joker and James Joseph (Niall Wright), the eldest, models himself in his father’s image. They are joined, to help out on the harvest, by their cousins the mouthy Corcoran boys, Shane (Tom Glynn-Carney), Diarmaid (Conor MacNeill) and Declan (Michael Quinton McArthur).

Unrelated by blood but no less a part of the family is the simple-minded Englishman Tom Kettle (Justin Edwards), a gentle giant taken in by Quinn’s father when he found the abandoned boy at age 12, wandering by the river. A tireless worker but also a dreamer, Tom lives in a cottage on the farm, periodically turning up at the house with pockets full of apples blown from his trees, and a rabbit he pulls out in moments of nervousness. A scene in which he recites Sir Walter Raleigh’s poem The Silent Lover signals a heartbreaking moment later in the play in which he gets down on one knee to declare his own previously unspoken feelings. 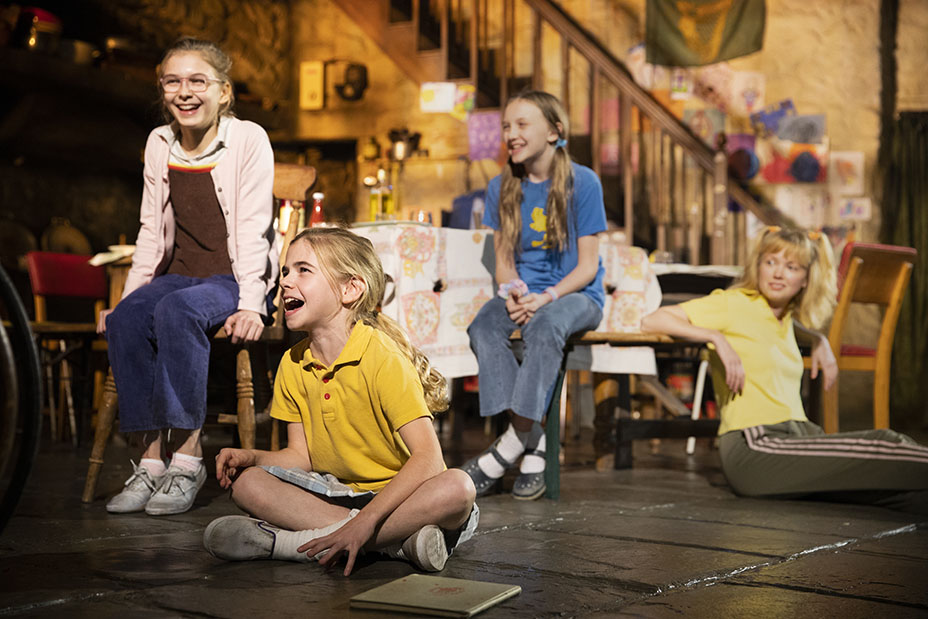 That Tom is so clearly inspired by Lennie from Of Mice and Men seems no accident. Butterworth takes hold of familiar figures and quaint stereotypes with an assured, two-fisted grasp that turns potential cliché and melodrama into mordant comedy, exuberant vitality, lusty feeling or unspeakable sorrow. The play is unhurried in terms of the way it introduces characters and relationships, giving us plenty of time to sort out who’s who. But every last person on stage is a distinct character, their lives as intertwined as their fates, all tied to the corpse that lay pickling in the bog for ten years.

Mendes responds with astute direction equally attuned to individual nuances and to the collective dynamism of this rowdy, noisy assembly. Moments of piercing intimacy are interspersed with bouts of wild physicality, notably when the harvest feast erupts into a spontaneous ceilidh, with traditional Irish dancing, before cocky Shane abruptly switches the music to “Teenage Kicks,” the late-’70s pop-punk classic by Derry band The Undertones, and a different, raw energy rips through the room.

Glynn-Carney is electric, exuding a dangerous swagger and a nasty attitude from the moment Shane walks in from the fields. The hyper-sexual, herky-jerky convulsions of his dance moves — a more aggressive version of Considine’s take on Mick Jagger’s signature funky chicken strut at the start of the play — seems to hint at the radicalized violence he has embraced. It’s just one of many instances in which Mendes and Butterworth inject a chill into seemingly lighthearted moments, steadily ratcheting up the suspense until a closing scene that leaves you shocked and breathless. 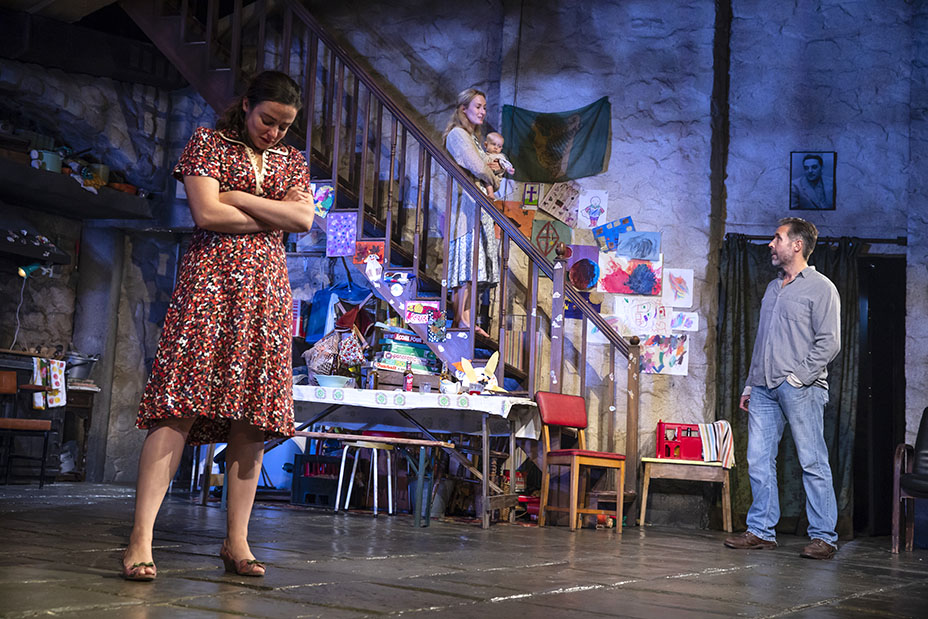 The performances are too good, right across the board, to single out all that merit recognition. But I particularly loved watching Flanagan emerge periodically from waking slumber, her eyes burning with feverish intensity. Another distinguished Irish stage veteran, Molloy, is so caustic as Aunt Pat that her words sting, but there’s fathomless sadness beneath her bitter humor. O’Reilly cuts through Mary’s fragile presence with a gorgeous speech that spills out of her toward the end, full of conflicting impulses of hurt and compassion. And Edwards’ Tom Kettle is a figure of wrenching innocence and haunting pathos.

The young actors also are exceptional, funny and natural. Fee’s Michael is especially strong, responding to Shane’s corrosive anger with matching fervor, espousing the pacifist convictions he has learned from his father.

However, the throbbing heartbeat of this huge, meaty play — which runs a full three hours but hurtles by in what seems like half that time — is shared by two actors: Considine makes a stunning stage debut, with boundless charisma, immeasurable warmth and a wellspring of unforced humor, never hiding the dark past that Quinn can’t escape. And Donnelly — Butterworth’s partner, whose family experiences partly inspired the play — Is grounded and determinedly capable but bleeding internally. The palpable longing between these two, in the air from their first moments alone together on the stage, provides a sweeping emotional undercurrent. And yet they only mutually acknowledge the full extent of their feelings in a late scene of romantic desolation so exquisite I’m still playing it over in my head days later.

The same could be said for countless other moments in The Ferryman, a boldly compelling depiction of loves that bind or blind, hate that festers and destroys, and a war whose cruelest blows are struck not solely against the enemy. It’s a unique experience — hilarious, shattering, alive visually, intellectually and emotionally, even sensory in its heightened rustic naturalism. I swear you can smell the pungent notes of whiskey wafting through the theater as men, women and “wee ‘uns” alike have a drop of Bushmills as a lucky tonic for the harvest day ahead. And the language is sheer music, even when laced with the most obscure Irish vernacular. This is rich, full-throated theater not to be missed.