One of the most stylish shows on television, Feud, comes to an end on Sunday, and along with it some of the best retro glam fashion moments to grace the small screen since Mad Men, thanks to costume designer Lou Eyrich.

Created by Emmy winner Ryan Murphy and starring Jessica Lange and Susan Sarandon as one-time Oscar winner Joan Crawford and two-time Oscar winner Bette Davis, respectively, the FX show revolves around the premise that the two Hollywood divas were long-bickering rivals who reluctantly teamed up in the twilight of their careers to make the 1962 horror film What Ever Happened to Baby Jane?, which proved to be a surprise hit, deepening their rift. One episode dramatizes the 1963 Oscars at which Davis was nominated for Baby Jane but Crawford, who was not, still managed to upstage her.

'Fargo' Writer Lee Edward Colston II Returns to the Stage With L.A. Debut of His Play 'The First Deep Breath'

We caught up with Eyrich on the eve of the finale to chat about the fabulous looks in the show, which took place between 1963 and 1978; how she created Crawford’s 1963 Oscars gown; where she sourced Davis’ Bakelite bracelets and Hedda Hopper’s fabulous hats; and why on earth everyone was wearing fur in Los Angeles. 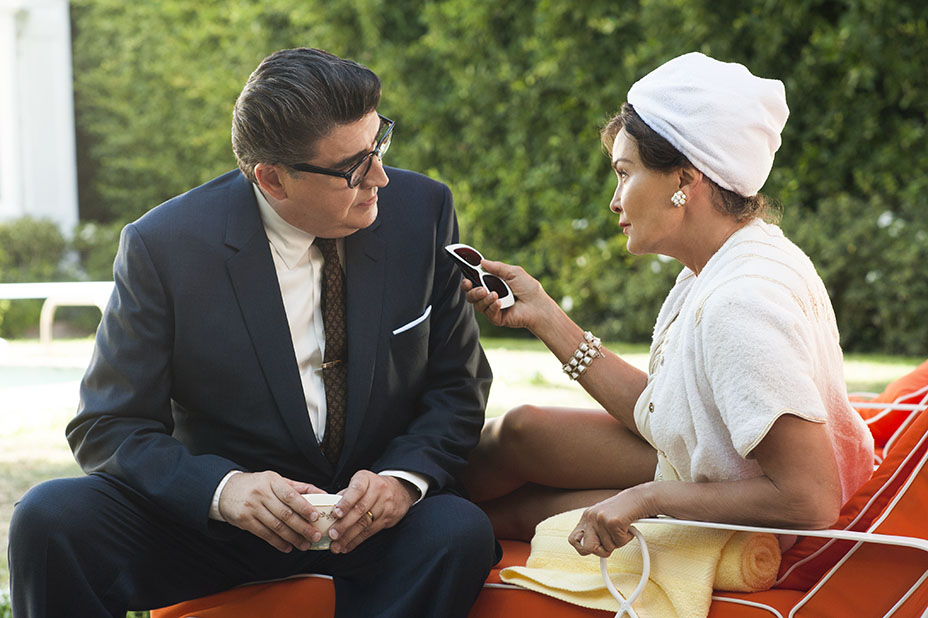 What kind of original source material did you look at for Davis and Crawford?

Luckily, because they were iconic real people, a ton of research was available. I read some books on them, listened to Joan Crawford’s book on tape, watched a lot of videos and interviews, and both of them were on a lot of talk shows. But I didn’t watch many of their old movies, because I didn’t want to be influenced by those times when they were playing characters.

What are the differences in their personal styles?

Bette was very East Coast pragmatic, more sensible, down-to-earth with a bit of that Yankee touch. She dresses very much in earth tones — green, golds, browns, checks, more richer autumnal colors. Joan was more of a movie star, and she never went out of the house without a full face of makeup, and the sunglasses and purses — everything matched. Even when she received guests, according to her book on tape, she would come down dressed. We kept her in cool tones, icy blues and greens and pinks, and she did dress a little youthful for her age, sort of reliving her glory days. Bette also wore a lot of capris, but Joan rarely wore pants. 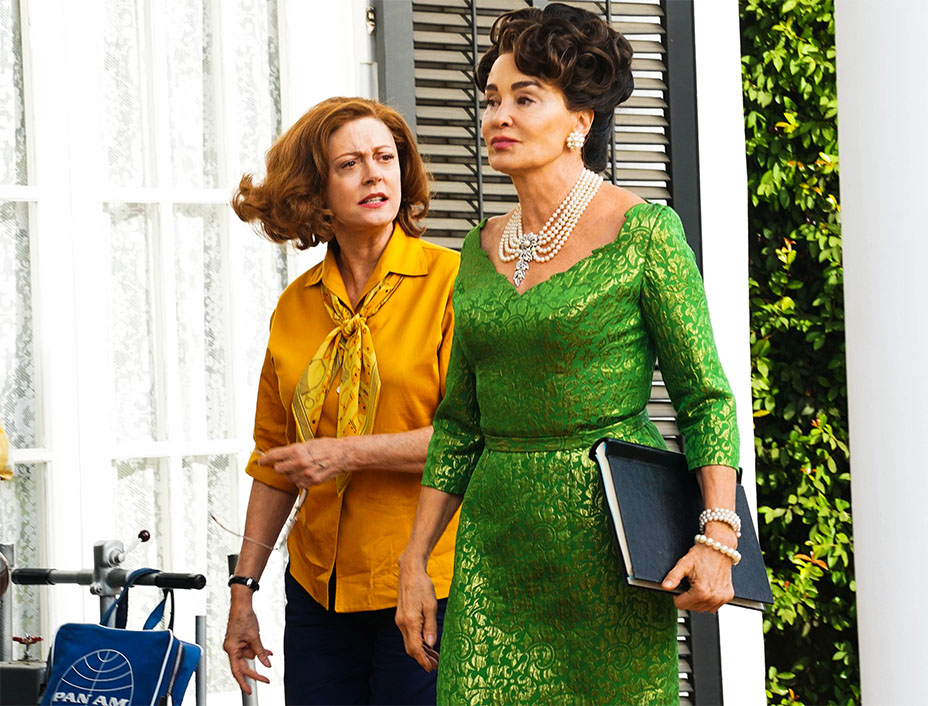 How many costumes did you build and how many were vintage sourced?

About 40 percent was made-to-order and 60 percent was vintage rented and bought. We were flying it in from Canada, San Francisco, the East Coast, and we did a lot of eBay shopping. Here in L.A., we did a lot of actual shopping at Paper Moon in Silver Lake, Golyester, Recess LA and The Way We Wore on La Brea, Paper Bag Princess on Olympic, Decades on Melrose, New/Found and Replika in downtown L.A. and Playclothes in Burbank.

The accessories are great — the Bakelite jewelry, flip-top handbags and turbans — where did you source them?

One place is a hippie treasure called the Sherman Oaks Antique Mall, where we got a ton of Jessica Lange’s  jewelry. We also got a lot from Pickwick Bowl, which is a vintage fair with 40 vendors under one roof that happens three times a year. I spend, like, five hours there. Hedda’s [Hopper] hats were her signature, and 90 percent of her hats came from The Way We Wore. 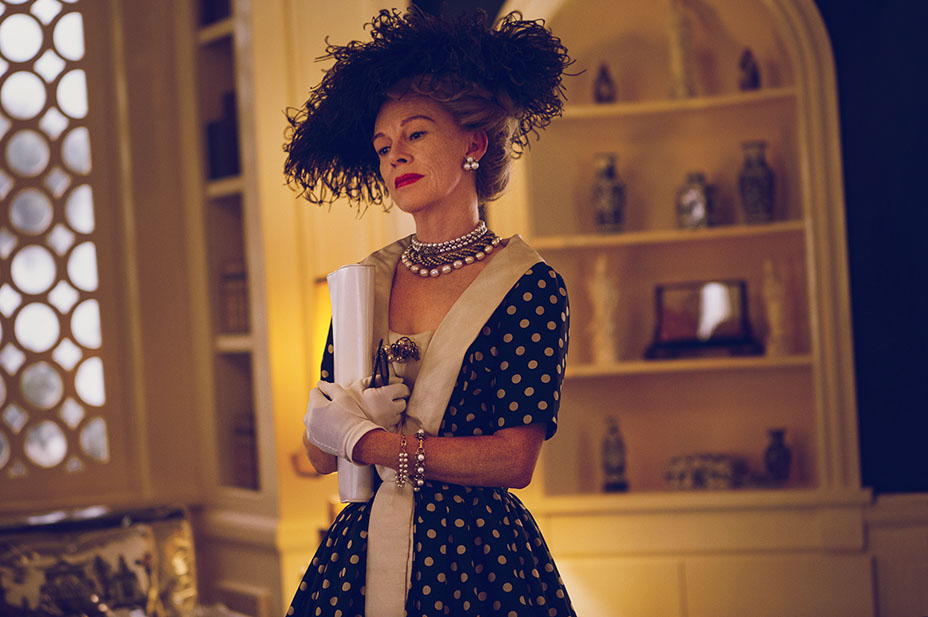 I love Hedda’s matchy-matchy style. Everything she wears is a conversation piece, which seems appropriate for a gossip columnist!

Judy Davis, who plays Hedda, was coming from Australia, so we had very little time to work with her, and in matter of a day or two had to throw together her look. We really studied our research and noticed she was always dressed up, she always wore dresses, crinolines, jewelry, bracelets, rings, always a hat. We found very few pictures of her without a hat. She did have a heightened sense of style. 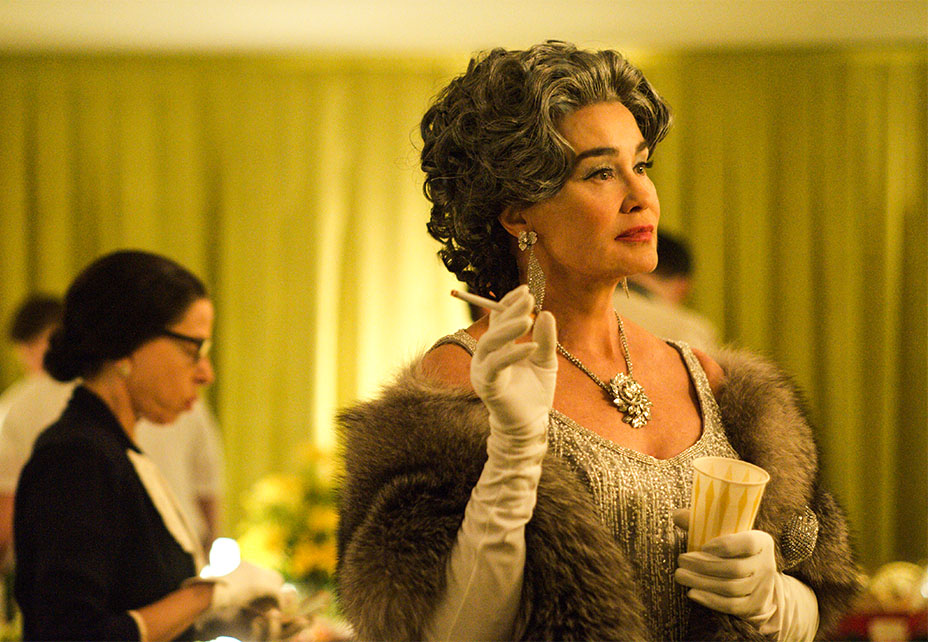 I’m obsessed with the Oscar-night looks. Crawford’s fringed gown — where did you find that?

Ryan wanted us to replicate Oscar night frame-by-frame, and tried to replicate as much as we could afford to for a television show in the dress of everyone, even down to all the announcers and their wives, we re-created everything. When it came to Joan Crawford’s dress, she had said it was made by Edith Head, and there was no way I could compete with Edith Head! We had to source fabric that had enough beads, and in the fabric we liked we could only find white. We had it shipped in, then we had to dye it silver, and then our incredibly talented tailor put the dress together. The dress was really heavy and the first time Jessica wore it, it did a number on her back. So we built in a corset and lift to help take some of the weight off. The earrings and necklace we also had replicated.

The silver she added to her hair, was that a true Joan Crawford story?

The story was that it was actually Edith Head’s idea to add real silver flakes to her hair, and Ryan wanted to do it.

In our research, we found watching the clips that caftans were all the rage. At first, I didn’t want to put Joan in one as well, because we had Olivia in one. But it’s all they wore, sheer caftans with sheaths underneath. I personally love a caftan and have many.

What was with the giant furs everyone was wearing in the L.A. sunshine?

In our research, we found people did wear them in the 1940s and 50s, especially. We got all our fur from what was the popular furrier in the day, Somper Fur in L.A. I think it was just fashion; it was a sign of the times, the opulence.

Was it a fun project?

Looking back it was, but it was the most difficult I’ve ever done because of how many decades there were (we had flashbacks to the 1940s, too), how many things had to be made and on a TV budget. We didn’t get that much time to prep, just about five weeks, so we were always just one day ahead, or even just a half-day ahead. It was hard on the nerves, but what a cast!

I’m working on Ryan’s next show, Versace: American Crime Story, which will be very different.