How do you take a 1964 musical blockbuster seen in countless revivals and tours, not to mention a robust big-screen treatment that still holds up, and imbue it with illuminating new life? In the case of director Joel Grey’s shattering reclamation of Fiddler on the Roof, it’s simply a matter of hearing the familiar work in a new language. Or more accurately, an ancient language.

A sleeper hit last summer at Lower Manhattan’s Museum of Jewish Heritage, this lovingly mounted staging from the National Yiddish Theatre Folksbiene has transferred uptown to a commercial venue, delivering raw emotionality, boisterous humor and cultural authenticity that will stir you whether you’re experiencing the show for the first time or the 15th.

Of course it doesn’t hurt that the fine company is led by a great Tevye, the milkman struggling against lifelong poverty to keep his wife and five daughters fed, while in a constant, testy dialogue — either reasoning with himself or with God over the trials of his hardscrabble existence. “I know that we are the Chosen People, but once in a while can’t you choose someone else?” he asks in a typical moment of unshakable belief colliding with questioning irreverence in the face of a fresh challenge. Tackling that mighty role with all the combative inner life and heroic gusto it requires, Steven Skybell brings exuberant charm, warmth, flinty intelligence and even a bearish sexiness.

He also gets one of the more amusing song translations in his signature number, “If I Were a Rich Man,” which becomes “Ven Ikh Bin a Rothshild” (“If I Were a Rothschild”), cleverly turning a nonspecific dream of wealth into envy of the great Jewish banking dynasty of the era. 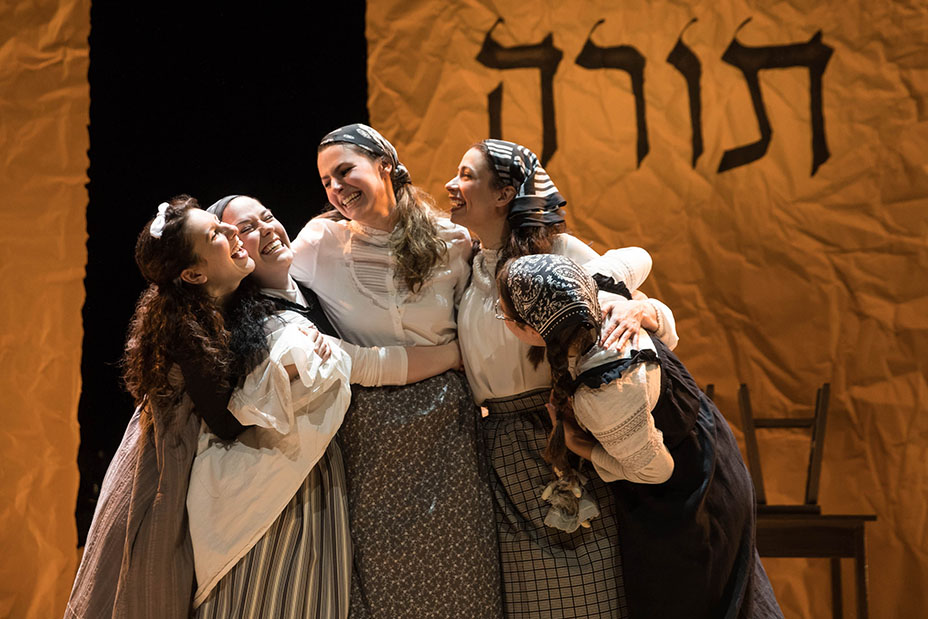 But beyond Skybell’s galvanizing performance, which simultaneously anchors and elevates the material, there’s something uniquely soul-piercing about hearing these beleaguered characters — united by faith, community and the encroaching arm of ethnic persecution — speaking as they would have in the historical setting, a Jewish shtetl in Imperial Russia in 1905.

It’s a natural extension that this production — while honoring the Broadway tradition and the original direction and choreography of Jerome Robbins — is more intrinsically grounded in the stories of Sholem Aleichem that inspired librettist Joseph Stein, composer Jerry Bock and lyricist Sheldon Harnick. The author’s advocacy for Yiddish as a national Jewish language gives this the feel of a full-circle passion project. But irrespective of your origins, the revival connects with universal notions of ancestry that exert a powerful force. As does the eternal relevance of its representation of displaced families and parents and children torn apart.

The translation by Shraga Friedman dates back to the mid-’60s and was first performed in Israel. Even without the supertitles in English and Russian projected onto Beowulf Boritt’s spare but effective set of parchment and cloth panels, the language is so rich in guttural musicality, wry wit, the weight of adversity and the solace of faith that translation hardly seems a requirement. The single word for Torah is painted in Hebrew letters across the main banner, emphasizing both the centrality of religious law to the show and its driving conflict between tradition and change.

That aspect is foregrounded in one of the all-time great opening numbers from the American musical canon, “Tradition” (sung here as “Traditsye”). In this revival, the song does the usual job of setting the scene and establishing the key sub-groups of characters — the papas, the mamas, the sons, the daughters, each with their own collective dance movement. But it also helps our ears adjust to hearing a familiar song in a language that many of us know only from words that have spilled over into the wider lexicon. One of them, meshuge, is in the show’s opening line. 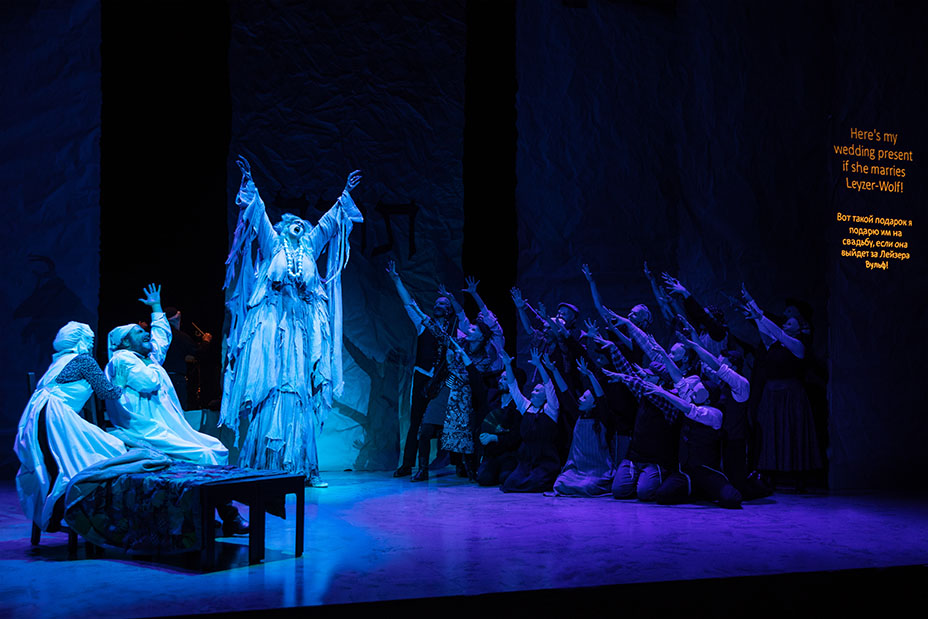 What’s uncanny, though, is how entirely organic the Yiddish translations sound, wedded to Bock’s rousing melodies and following the rhythmic beats of Harnick’s lyrics as if the songs were conceived that way.

Grey’s direction doesn’t match the artfulness of Bartlett Sher, who staged the 2015 Broadway revival that drew a connective thread linking the pogroms and the expulsion of Jews from the Pale to 21st century political refugees being driven from their homelands. Nor does he aim for the overarching stylistic imprint of David Leveaux, whose austere 2004 production veered into Chekhovian introspection to a degree that dimmed the musical’s vigorous spirit.

What Grey does is tap directly into the show’s emotional wellspring with a minimum of fuss. There’s as much presentational story theater as naturalistic melodrama here and yet the production somehow bypasses the artifice of the musical to speak directly and with equal conviction to the heart, the guts and the mind. Grey trusts the material and the innate power of this linguistic makeover sufficiently to find every rush of vitality, every plummeting descent into sorrow, and give all of it the visceral feel of lived experience.

A glance around me revealed that I was far from the only one wiping away tears during the solemn ritual of “Sabbath Prayer” (“Shabes Brokhe”); the tender parental reckoning of “Sunrise, Sunset” (“Tog-ayn, Tog-oys”); Tevye’s agonized denial of the daughter who elopes with a Russian gentile, “Chavelah” (“Khavela”); or the mournful diaspora of “Anatevka” (“Anatevke”). 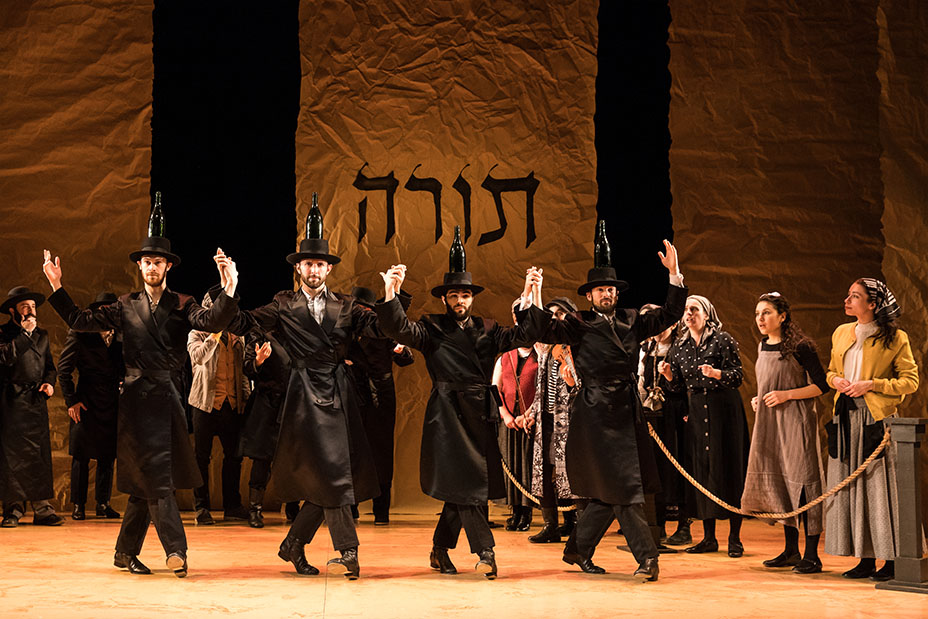 This production leans into the musical’s more somber shadings, from haunting melancholy through devastating tragedy. But it also shimmers with joy, with the inextinguishable life force of a downtrodden people whose identity is embedded not just in their suffering but in their resilience.

The musical staging and additional choreography supplementing Robbins’ original dances are by Stas Kmiec, and the big numbers erupt with stunning energy, notably the engagement celebration, “To Life” (“Lakhayim”). More than 50 years after it debuted, Robbins’ dueling dance for the male ensemble remains invigorating in its explosive virility, with the Jews loose and limber, transported by their jubilation, while the Russian officers thread amongst them with muscular athleticism, their blessing carrying a suggestion of menace. And the famous bottle dance, at the wedding of Tevye’s eldest daughter Tsaytl (Rachel Zatcoff) to Motl the tailor (Ben Liebert), still thrills. Don Walker’s original orchestrations, adapted by Larry Blank for 12 musicians, sound rich and full-bodied under the baton of music director Zalmen Mlotek.

The musical’s other exciting set-piece is Tevye’s elaborate deception of his wife Golde (Jennifer Babiak) in “The Dream” (“Der Kholem”). In that hilarious fabricated nightmare, performed with masks and shadow play, the ghost of Frume-Sore (Jodi Snyder) appears as a fearsome apparition on stilts to deliver dire warnings of the consequences should Tsaytl marry her widower, the butcher Leyzer-Volf (Bruce Sabath).

Tevye’s precipitous agreement to that match, and his subsequent discovery that Tsaytl and Motl have defied tradition by making a private commitment to one another, is the start of the dairyman’s angst with daughters who choose love over an arranged marriage, making them one of the story’s principal agents of change. Tevye’s paternal devotion places him constantly in a moral tangle, and Skybell plays this raging internal battle with tremendous verve. 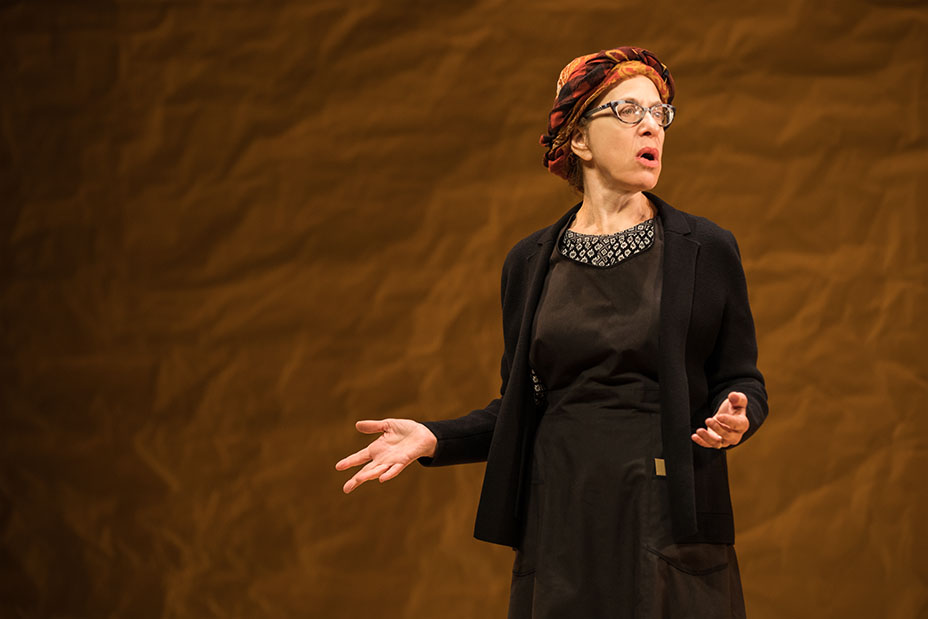 He is supported by a uniformly strong cast who handle the language with ease and expressiveness, without stinting on dramatic nuance. The invaluable Jackie Hoffman, who was probably born kvetching in Yiddish, makes a marvelous Yente, the gossipy matchmaker whose efforts to hitch Tevye’s daughters keep getting thwarted by romance. Hoffman is funny in her trademark deadpan sourpuss manner, and she could give master classes in the ambivalent shrug, but she keeps a tight lid on the shtick.

Also terrific is Babiak, one of the few principals new to the Folksbiene production, who sings beautifully and quietly reveals the loving compassion beneath Golde’s pragmatism. Her duet with Tevye, “Do You Love Me?” (“Libst Mikh, Sertse?”), often plays as corny sentimentality. But there’s a gorgeous poignancy to the song here — the milkman poses the question with affecting timidity to the wife he met for the very first time at their wedding, and she responds with thoughtful sincerity, persuasively conveying the notion that she’s never stopped to consider it in 25 years.

The younger couples all are distinctively drawn and captivating in their own ways. Gentle physical comedy is milked out of Zatcoff’s Tsaytl towering over Liebert’s diminutive Motl, who makes up for his lack of height in backbone. Stephanie Lynne Mason’s Hodl gives as good as she gets from Drew Seigla’s revolutionary Kiev student Pertshik, their arguments blossoming into affection. And Rosie Jo Neddy’s Khave breaks her father’s heart but is true to her own in the story’s most wrenching plotline, when she falls for the principled young Russian soldier, Fyedke (Cameron Johnson).

Grey navigates the show’s many shifts from comedy to pathos, from elation to fear and desolation, with a supple hand, and the heartfelt investment in the story and characters is evident throughout. This production is such a labor of love that it’s virtually impossible not to respond to its emotional trenchancy. No revival of Fiddler will ever come close to the original’s epic eight-year run, but this one demands to be seen.

'Fiddler on the Roof' Doc Picked Up by Roadside, Samuel Goldwyn Films