The first rule of the comic book incarnation of Fight Club is that it’ll look good — and with a creative team of Batgirl and The Other Side artist Cameron Stewart, American Vampire and Nextwave color artist Dave McCaig and Blambot founder Nate Piekos closing up the team as letterer, it’s a rule that has been followed through the 2015 Fight Club 2 and the newly launching Fight Club 3.

The artist, along with writer (and Fight Club creator) Chuck Palahniuk and cover artist David Mack, are pulling back the curtain in regards to creating a visual element for the current incarnation of a story that started as prose, and then went through a high-profile movie adaptation.

“With both Fight Club 2 and Fight Club 3, I wanted to mash up the grim sensibility of Edward Gorey and the old EC horror comics,” Palahniuk tells The Hollywood Reporter. “Physical action is paramount, and the sparse dialogue is almost beside the point. Cameron is the only artist who could give me the million unique gestures and facial expressions that carry such a story. The Fight Club world intercuts constantly between the present, the past, the conscious and the subconscious, and this year’s issues will explore a surreal Little Nemo in Dreamland layer of story; Cameron is also the only artist in comics who could manage those shifts between plotlines without losing the reader.

He continues, “As for Nate, he has great tricks for making the few bits of dialogue really pop. And, when I get clever or mansplain-y, Nate slaps a pill or spermatozoa smack-dab on my excess dialogue. The bastard.”

Piekos responds to that last joke this way: “The Fight Club comics are unique in that we intentionally obscure bits of dialogue with graphic elements like house flies, rose petals and pills. I think the astute reader can fill in the ‘gaps’ from context, and it adds a nice interactive element between reader and comic.”

He adds: “We focus on specific beats in the story where you can pause for a second and decide for yourself what our real intention is by obscuring some text.”

Stewart says he appreciates the black humor of Palahniuk’s writing.

“To reflect that, in working with him on the Fight Club graphic novels, I’ve embraced the cartoonier side of my artwork, so that even the most gruesome subjects are depicted with a playful wink. Sometimes, that has the effect of making them even more disturbing,” says Stewart.

McCaig says working on the series “is a treat.”

“There are multiple layers of reality in Chuck’s scripts; where muted colors can convey the dreariness of mundane life for our hapless protagonist, brighter colors can help pop out the larger-than-life Tyler Durden, and, without revealing too much, super-saturated colors can bring us to new places the series has never been to before,” says McCaig. “When these diverse realities meet, it’s a lot of fun, and I think people are going to love how it all comes together.”

Beyond the interior creative team of Stewart, McCaig and Piekos, the visual tone of both Fight Club 2 and the new Fight Club 3 series are set by David Mack, who painted the covers for both titles.

“I want my covers for Fight Club to crystallize something in Chuck’s writing,” Mack says. “Often this can be a moment in the story, or a surreal integration of concepts from the story. And, sometimes, I will base it on one sentence from the story, as Chuck’s sentences can be layered with possibility and levels for the mind to unpack. I may even handwrite some of Chuck’s words from the story onto the art and integrate it with the cover image. Sometimes, Chuck will see my drawing and suggest a sentence or detail to integrate into it. I love how Chuck writes in a way that the words often have natural visuals in the story — name tags, etc. — and when I combine his words with my visual interpretation of them, it can offer some levels of encrypted meaning to play out on the mental stage of the viewer.”

The first of Fight Club 3‘s 12 issues is released in comic book stores and digitally this Wednesday. Below are some pages from the issue. 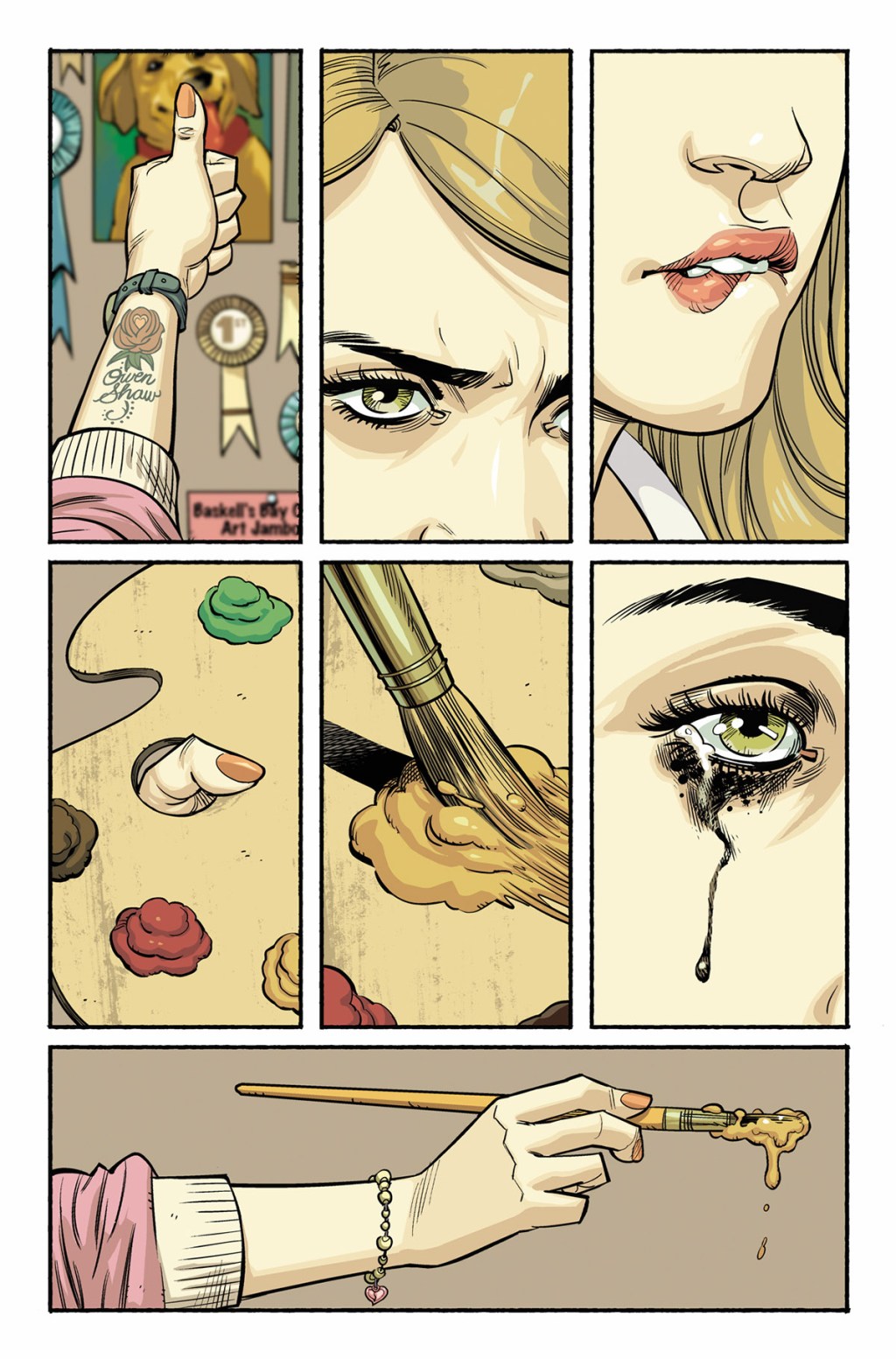 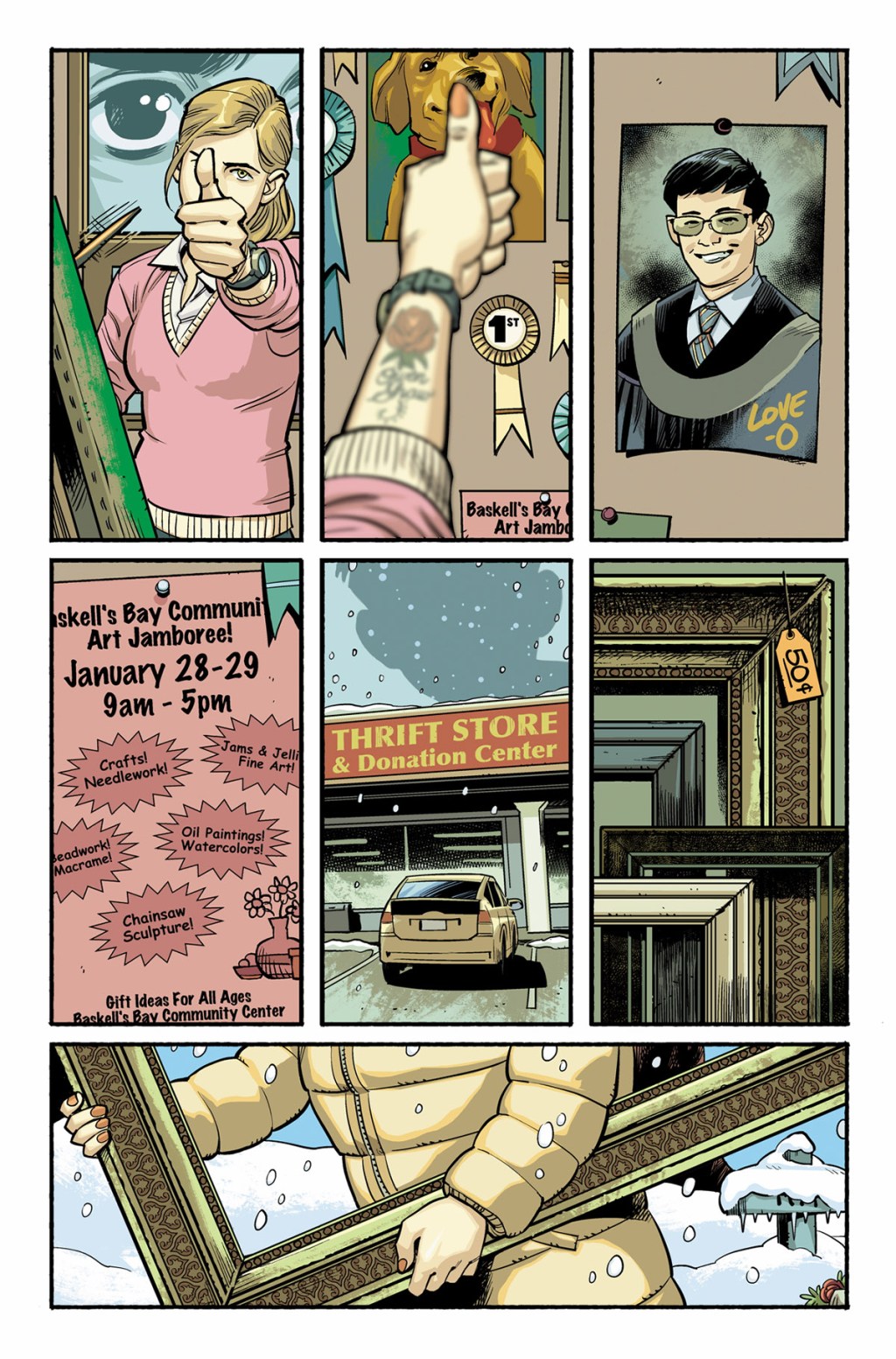 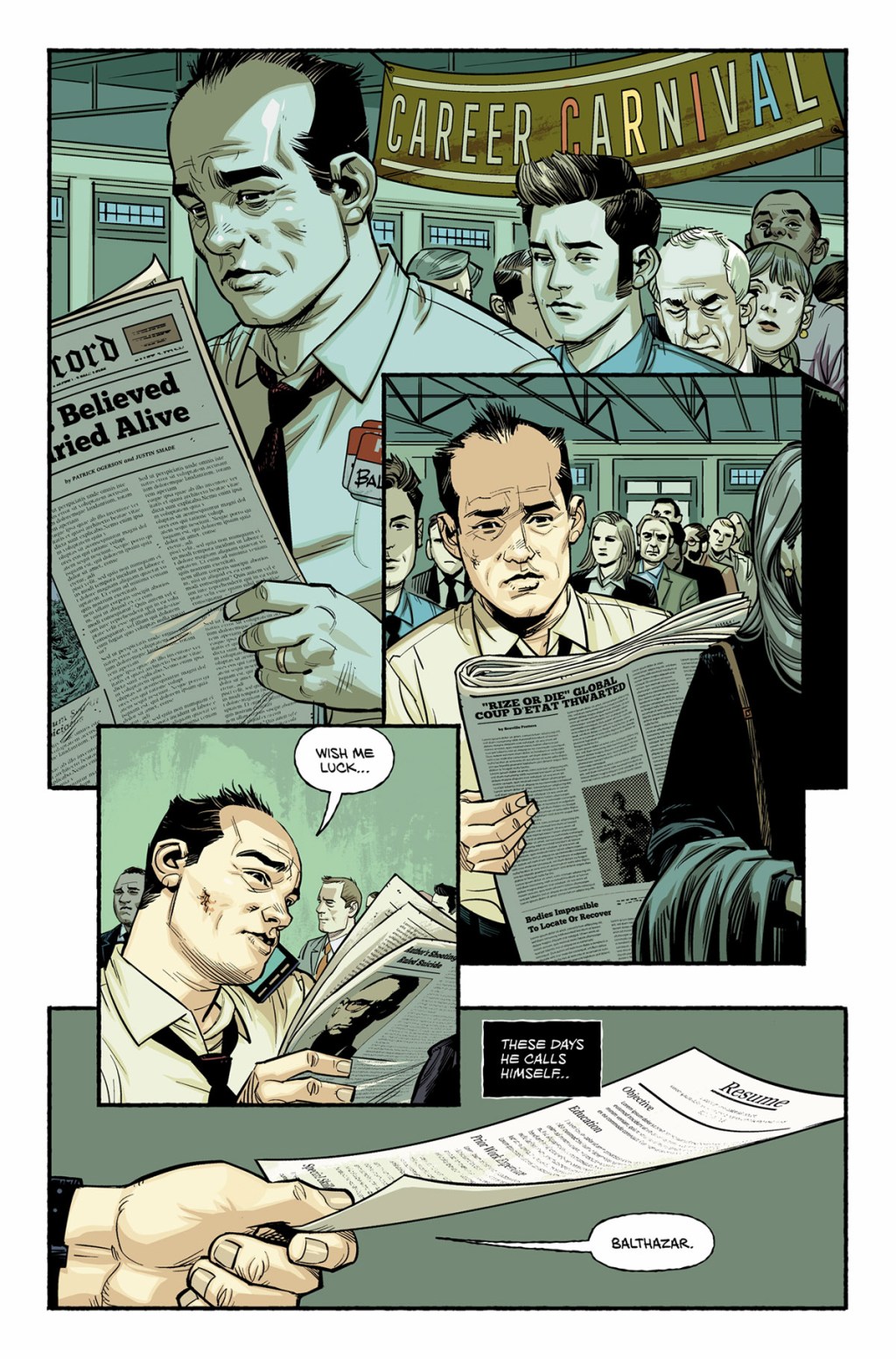 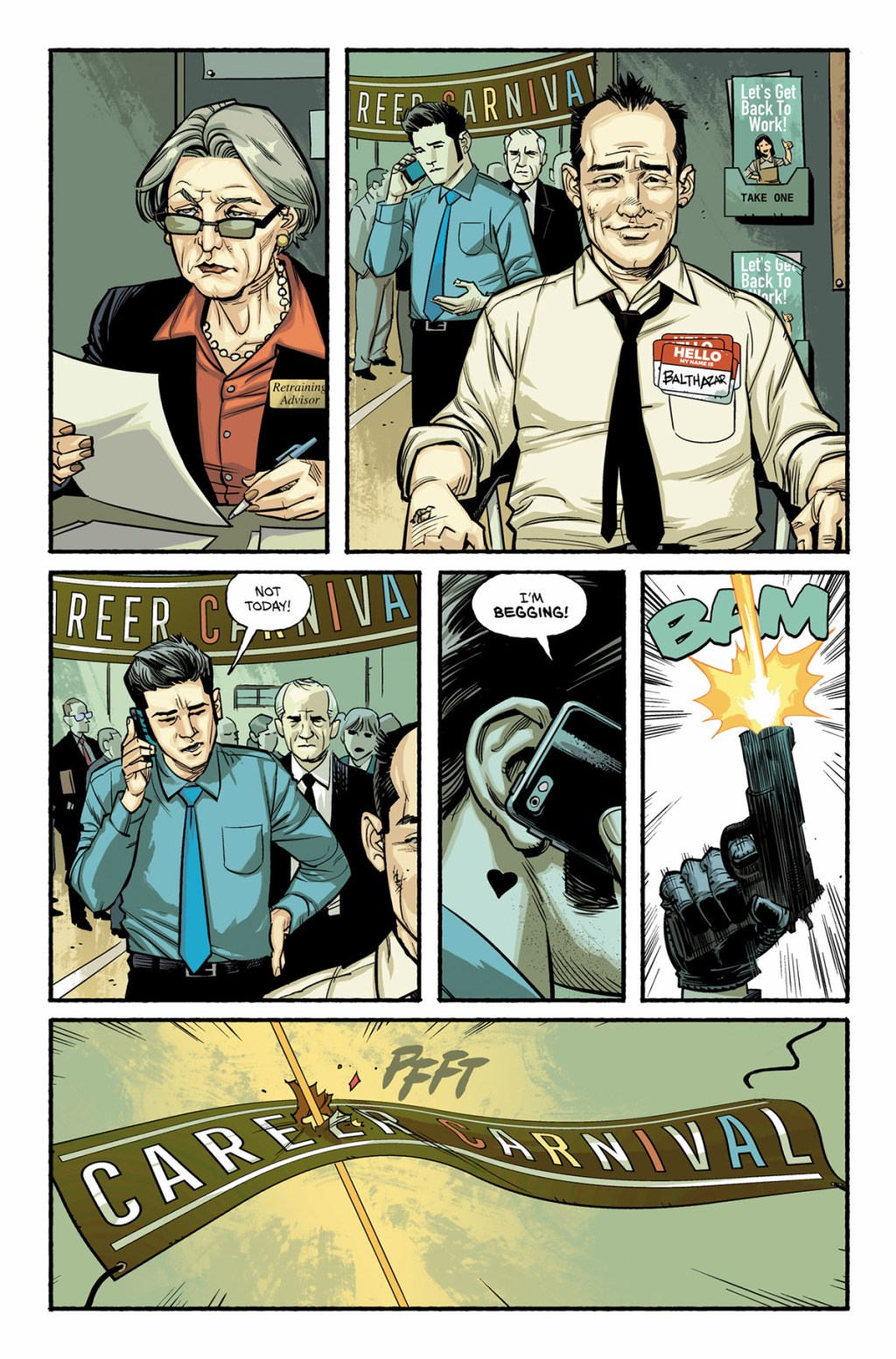 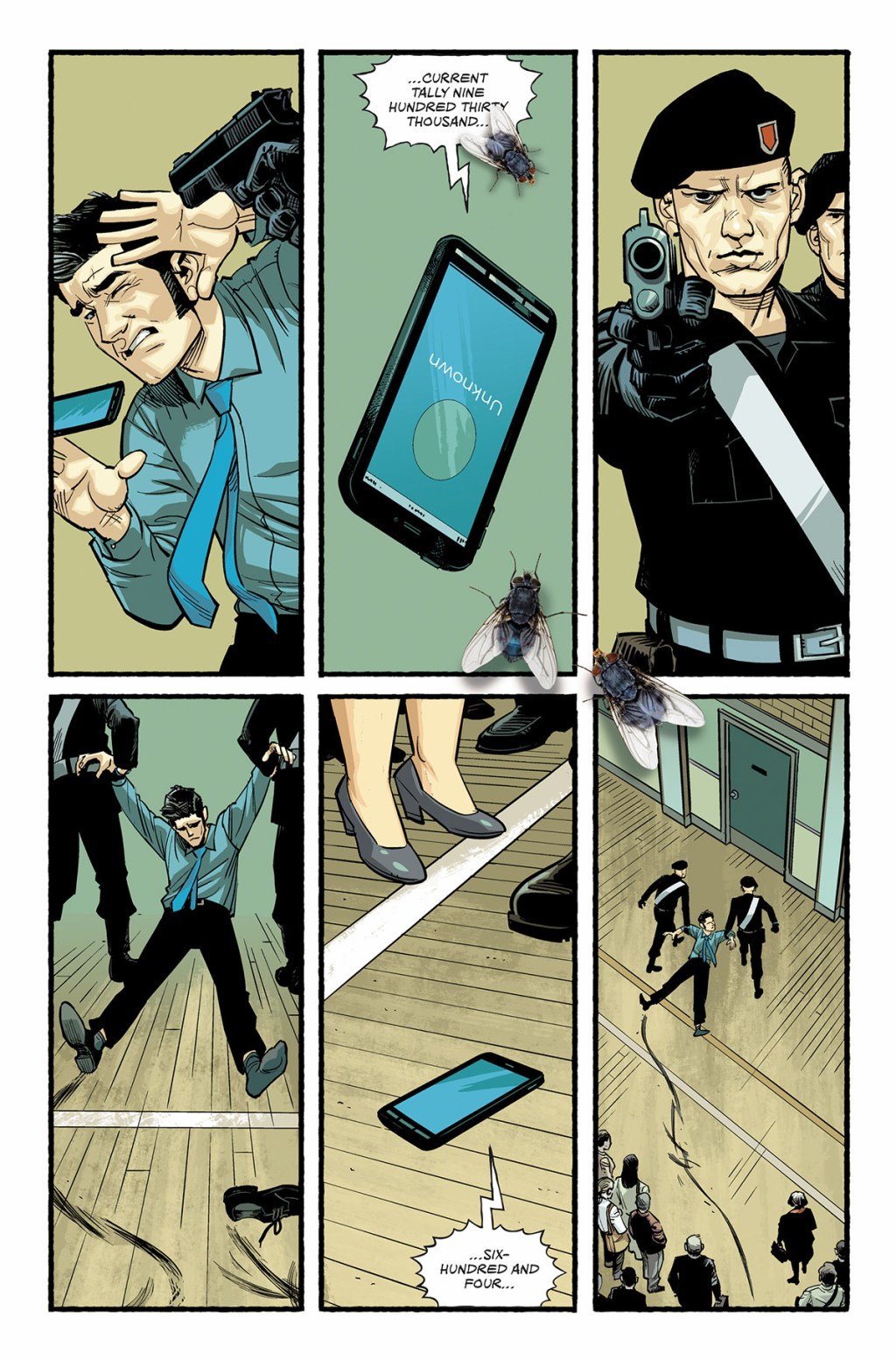 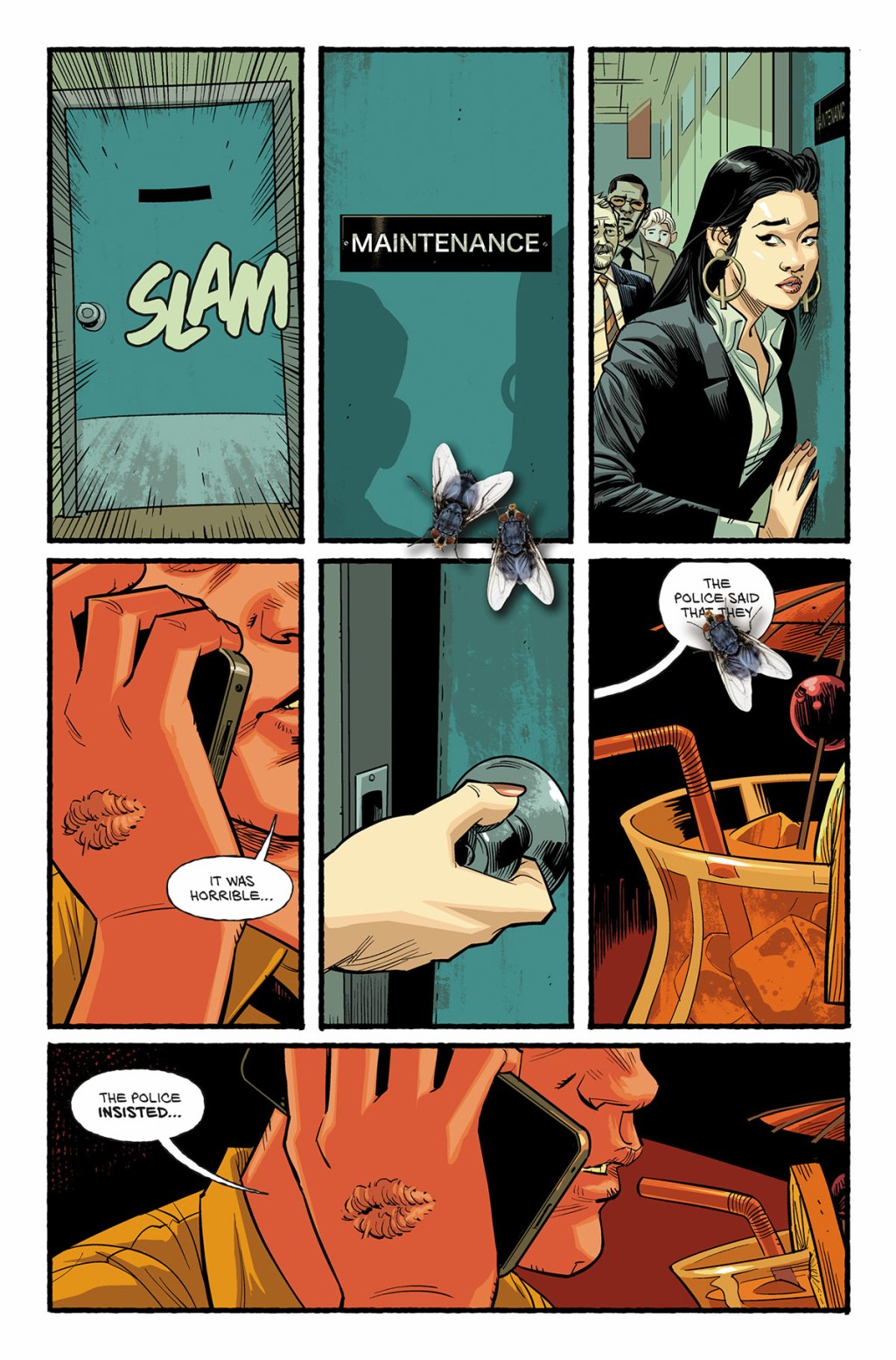 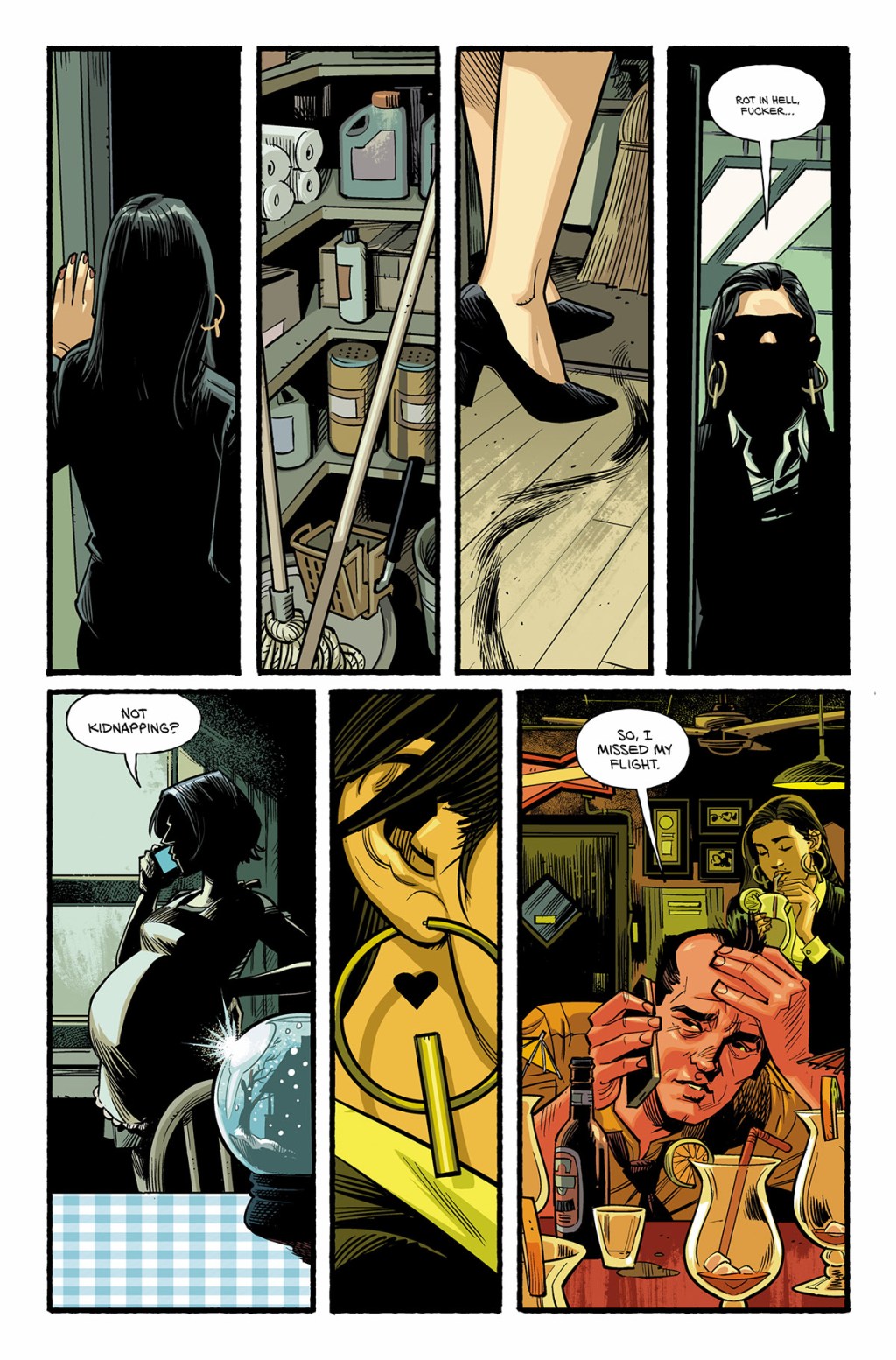 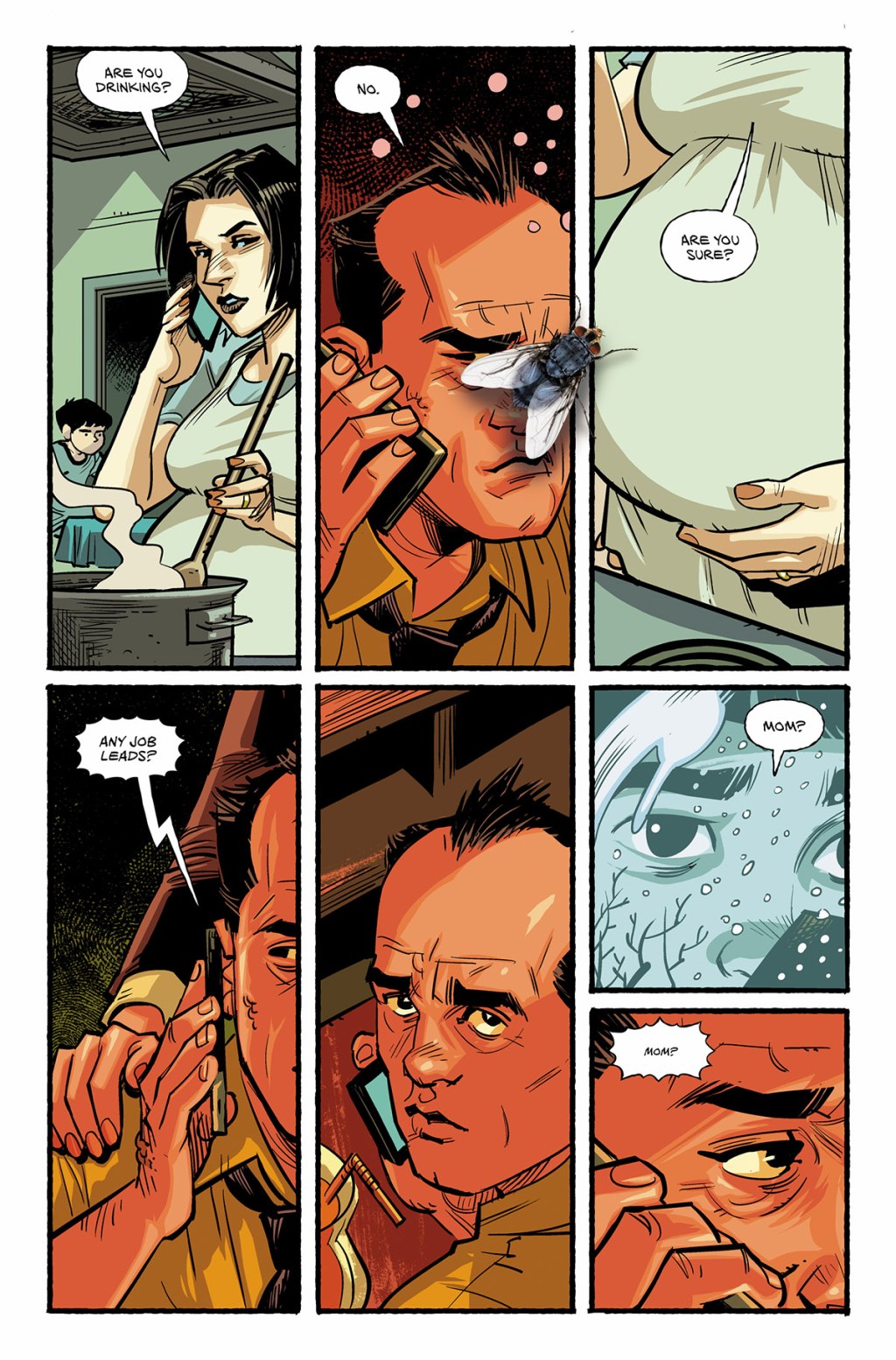 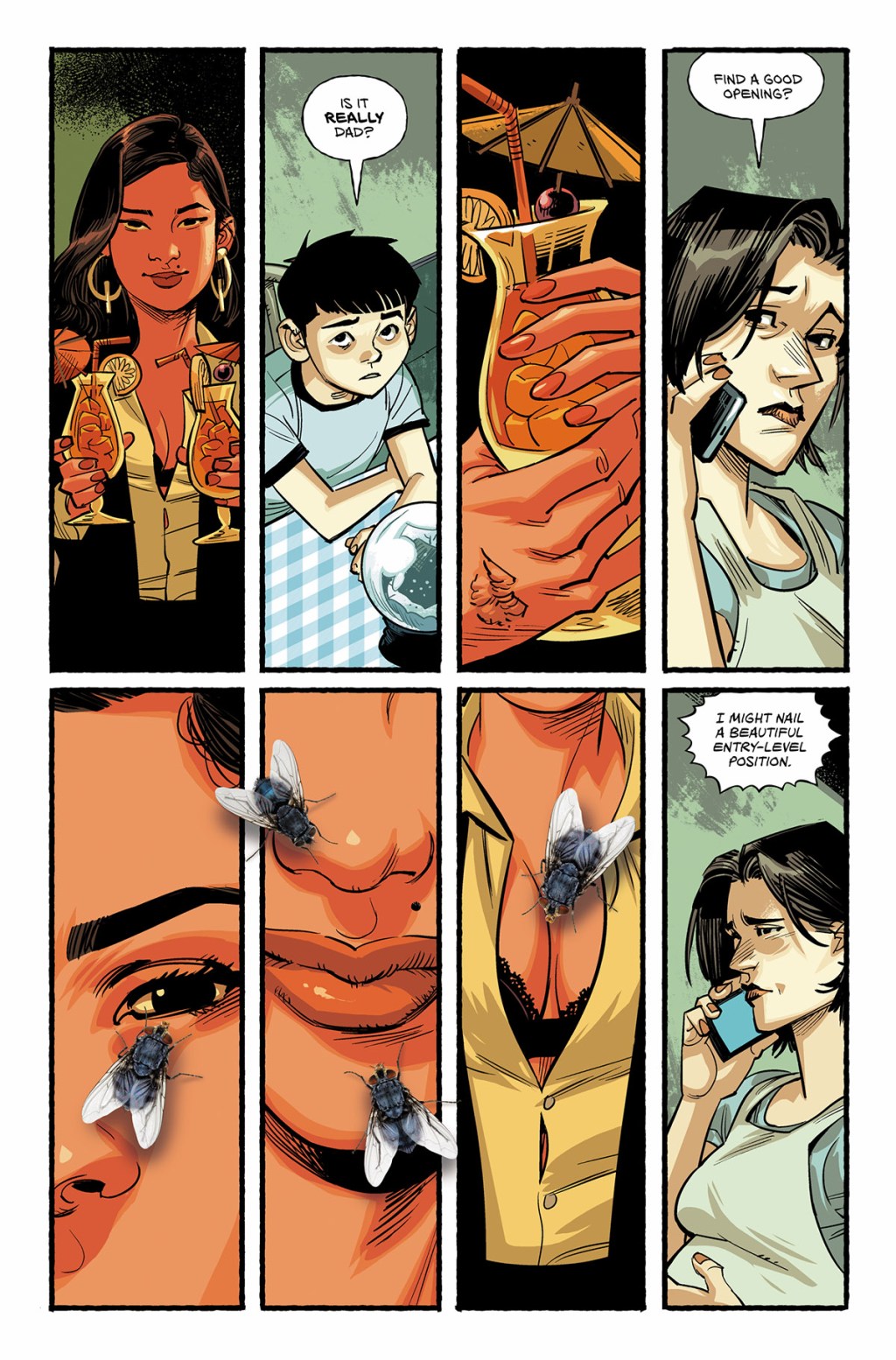 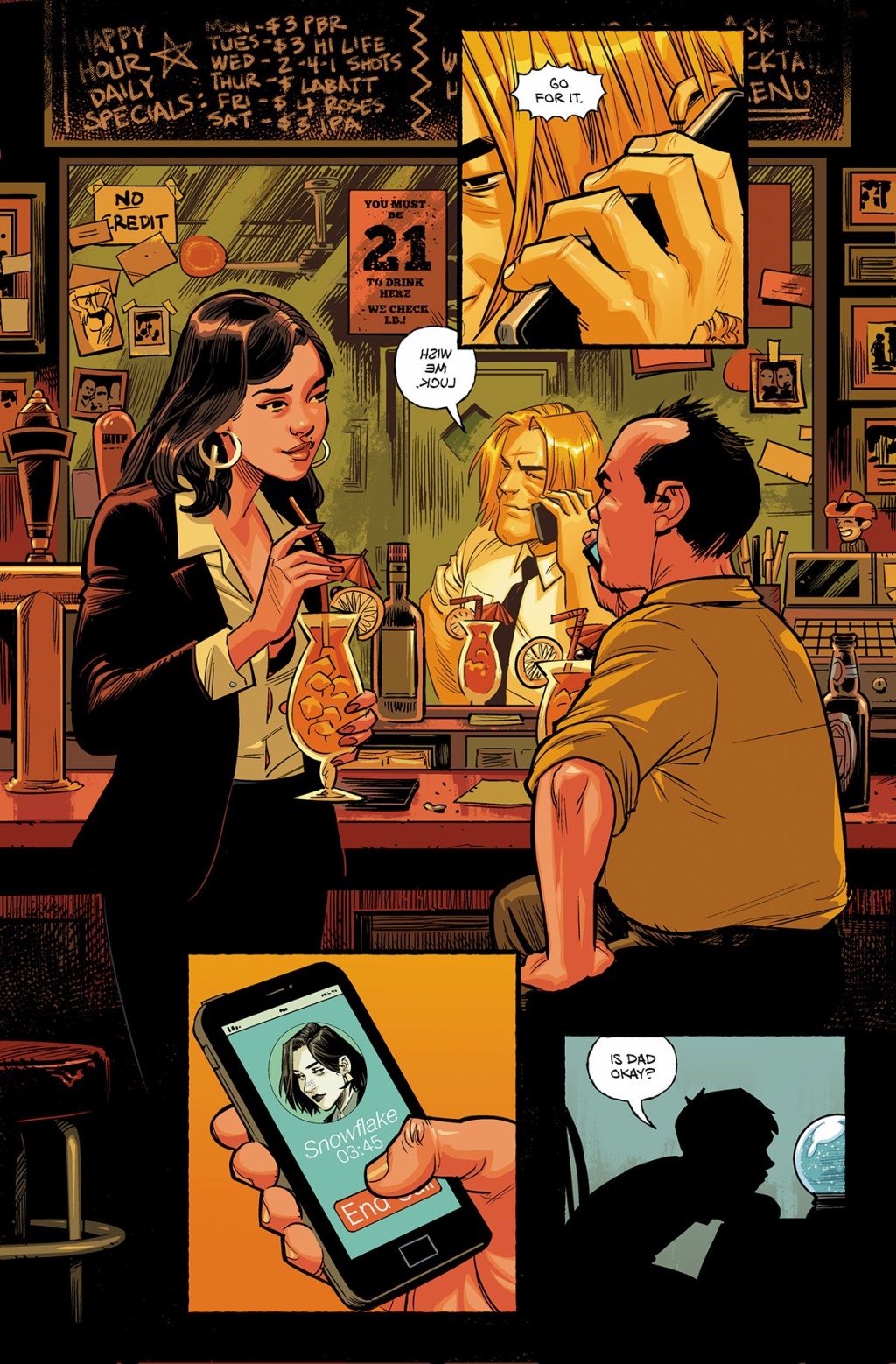