The first rule of Fight Club is actually “expect the unexpected” … at least, that’s the case when it comes to the story started in the 1996 novel of the same name by Chuck Palahniuk. Fight Club 3, the latest installment in the series — and the second comic book chapter, created by Palahniuk, Cameron Stewart, Dave Stewart and Nate Piekos for Dark Horse Comics — is out this week, and Palahniuk has written an exclusive introduction to the book for The Hollywood Reporter.

As Fight Club 3 opens, Marla Singer — the love interest of the narrator of the original novel, now called Sebastian — is pregnant, but the father isn’t Sebastian … it’s Tyler Durden, his alter ego, who returned after years dormant in the second installment of the series. But if Tyler prided himself on being able to take advantage of any situation, he might be stymied by what lies ahead in a world he’s had little hand in building. Collecting the 12-issue comic book miniseries from 2019, the new Fight Club 3 collection features the entire story, along with David Mack’s painted covers, and is in stores today. Below, Palahniuk’s exclusive introduction, along with Mack’s cover for the collection. — Graeme McMillan 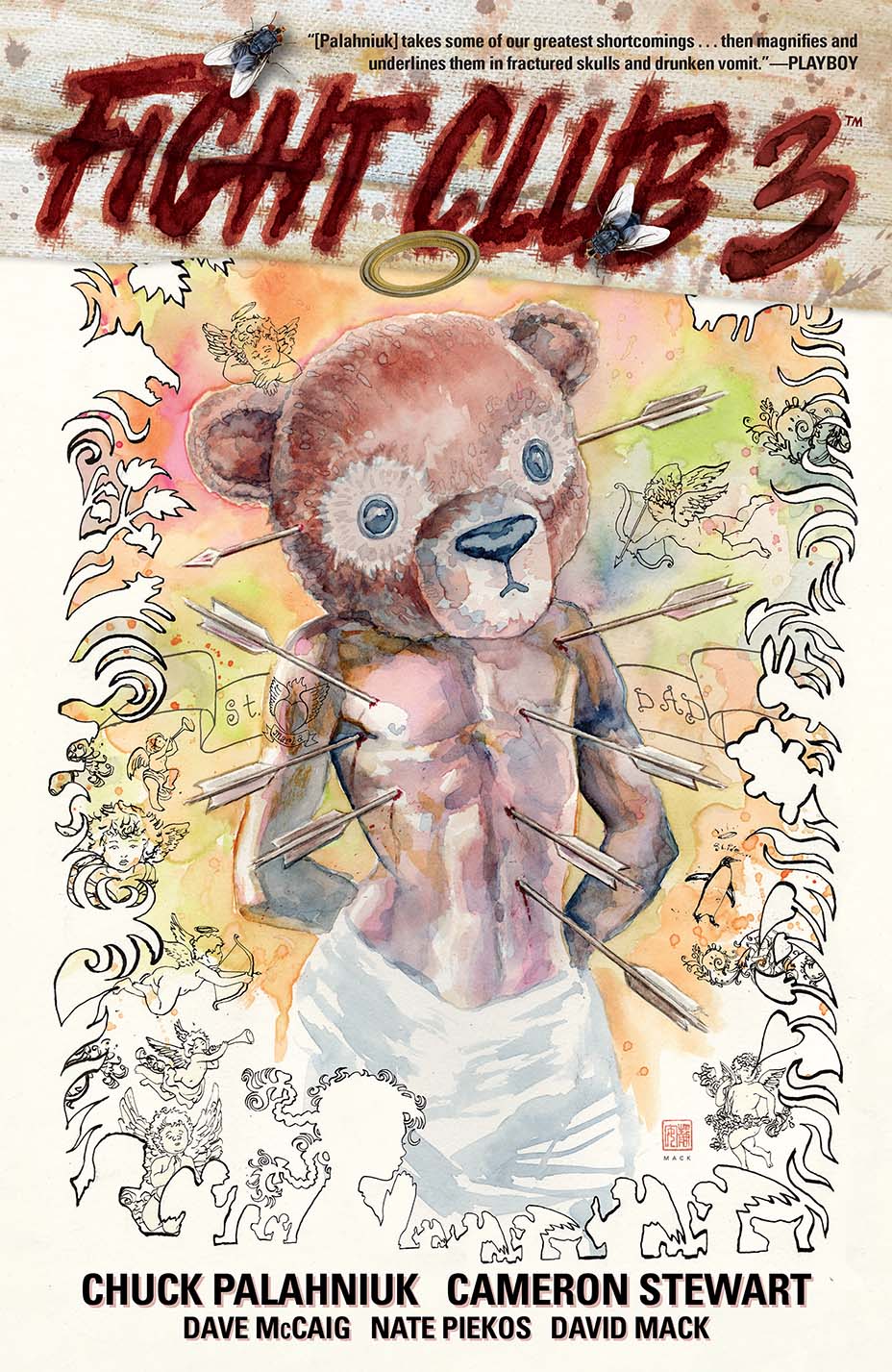 The person who taught me the most about writing fiction always said, “Write from a character’s broken heart.” I took that to mean seeing the character’s world through their damaged psyche. Again this is my take, but I see it as what people once called the “winning formula” in the old est training. At one point in your early childhood you reached a crisis. You were abandoned or rejected or shamed. And to cope you discovered one sure-fire way to be in the world. You decided to be funny. Or hard working. Or athletic. And you’ve been trapped in that one rut ever since due to the fact that you’ve forgotten it was your decision that trapped you.

In writing, I have to decide what rut a character is in. Then, how to get them out. At the beginning of the Fight Club saga, the narrator was a lifelong “good boy” who needed to go bad. Marla was a nihilist who needed to discover romance.

If we’re lucky our lives go forward and backward at the same time. Our children or our analyst help us discover the decisions we’ve made about the world, and we’re free to see the world — and ourselves — in a fresh way that’s not dictated by the past.

That writing teacher, Tom Spanbauer, would define the emotional journey as the “vertical” aspect of the story. The chain of plot events is the “horizontal” journey. To my mind, life takes us forward, but if we’re paying attention we also travel backward in memory. Or, in writing, in flashbacks. Any time a character drives a car, rides a conveyance or goes to bed, it’s time for a flashback.

That said, you can’t tell the reader how to decide something. At best you can depict the circumstances under which the character decided that her only hope was to be pretty or funny or smart for the rest of her life.

In Fight Club 2 the priority was to give the narrator a childhood, steered by his mentor, Tyler Durden. In Fight Club 3 it was time to give Marla a backstory, with Tyler pulling the strings, but more covertly. Always covertly. The goal is always to allow detail to accumulate in the reader’s mind. The reader must always be smarter than any of the characters, even Tyler.

No surprise, but the narrator and Marla both turn out to be orphans. First, because dead parents seem to be at the heart of comedy in the United States. Look at The Andy Griffith Show, The Beverly Hillbillies, My Three Sons and it’s all dead mothers. The Partridge Family, One Day at a Time and Alice are all dead fathers. Death is the background trauma that all the sitcom banter serves to cover. The funnier the show, the bigger the tragedy it’s trying to hide. So of course Marla and the narrator — be he Jack or Sebastian or Balthazar — are glib about violence, suicide, illness, death in general. Smart people see past this facade.

Second, they’re orphans because much of my generation felt orphaned as children. First dad was gone in the divorce, then mom was off to a job. Leaving only reruns of Barnabas Collins to meet us after school. We were the latchkey kids growing up to become what Robert Bly called the “sibling society” of no hierarchy or leadership. So like Sebastian and Marla we’re blundering along.

Beyond that, the narrator and Marla follow separate plot threads in both sequels. The perennially dying woman, Chloe, has emerged as the wise mentor to Marla. More or less a female equivalent to Tyler Durden. Maybe in Fight Club 4 the married couple will actually spend an entire book together. Or not.