Los Angeles is beginning to see an uptick in filming.

FilmLA, the organization that doles out permits and tracks shooting in the region, says that it’s finally starting to see a more confident return to production. Its monthly film permit requests have increased nearly 40 percent in August compared to July, with the office averaging around 27 applications per business day.

FilmLA first received the greenlight from local authorities to begin processing film permits on June 15. By June 19, filming activity was underway, though it stayed relatively quiet until recently. In its early August update, the office said that it was fielding about a third of the number of permits it typically would.

Since June, FilmLA has received approximately 1,127 film permit applications from 829 unique projects. After production activity quickly rose in mid-August, overall filming levels have stabilized at around 44 percent of what FilmLA would expect under normal conditions during the summer.

“As an essential contributor to the Greater Los Angeles economy, film production responsibly returning to our communities is a welcome sight,” said FilmLA president Paul Audley. “Of course, as Governor Newsom and public health experts remind us, COVID-19 will be with us for a long time. We are therefore mindful of the public health orders governing current filming practices and grateful for filmmakers’ conscientious embrace of crew and community safety on all permitted productions.”

As far as who is responsible for the filming, the advertising industry (meaning still photography and commercials) remains a prominent share of the activity with a 52 percent of the local permit requests. Scripted, unscripted and web-based content represent the next-largest share of August permit activity at 18 percent. Meanwhile, music video production now accounts for 11 percent of permits.

FilmLA expects to see a major pick-up in scripted television production in September that will deliver more increases and additional work opportunities for Angelenos. TV series that have resumed production or are slated to do so in the coming weeks include NCIS: Los Angeles, S.W.A.T., SEAL Team and Young Sheldon, among others. 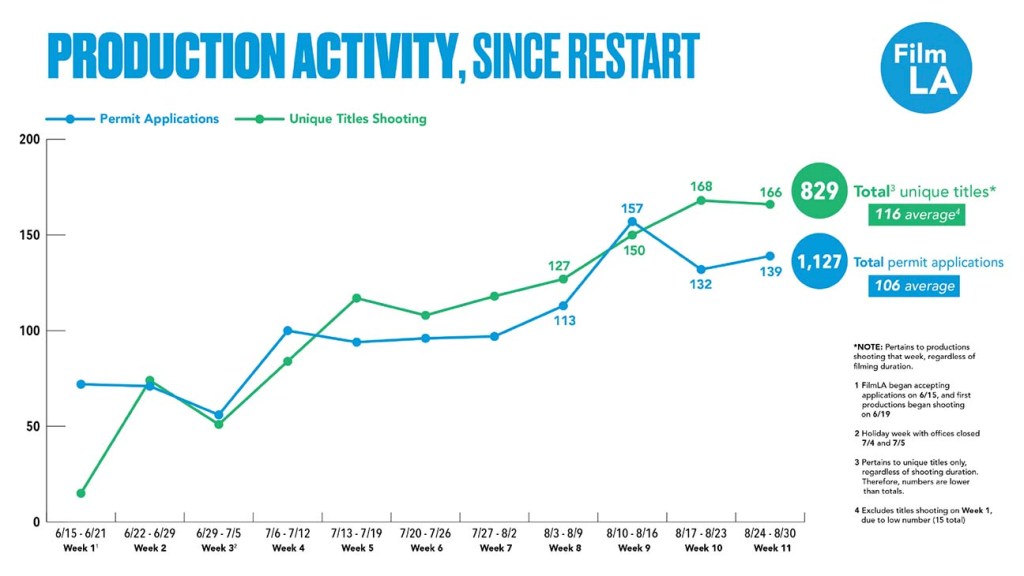