Venice, also known as the “Floating City,” is the site of some of the most iconic shoots in cinema history, from Death in Venice to The Wings of the Dove. With facades untouched in nearly a millennium, dreamlike islands and a labyrinth of ancient streets, it’s on many a director’s wish list to have even a shot or two there.

But the hard reality in Venice is that in the pedestrian city there’s no room for trailers or any other vehicles, logistics are a headache to map out, streets are overrun with tourists to ruin even the tightest of shots, and even with a healthy tax credit, it’s still one of Italy’s most expensive cities. Among filmmakers who manage to make it work, however, most would argue that there are many more advantages than disadvantages.

First-time director Julien Landais couldn’t imagine shooting his film, an adaptation of a Henry James story, The Aspern Papers, starring Vanessa Redgrave, Jonathan Rhys Meyers and Joely Richardson, anywhere else. The film will have a special screening in Venice to coincide with Redgrave’s receiving the special Golden Lion award for lifetime achievement for acting.

Landais shot his film last July and August when tourism (and the city’s temperature) reaches its peak. “When I started, everyone said Venice is going to be terrible to shoot, don’t even think about shooting there in the summer, it will be a nightmare,” he tells The Hollywood Reporter. 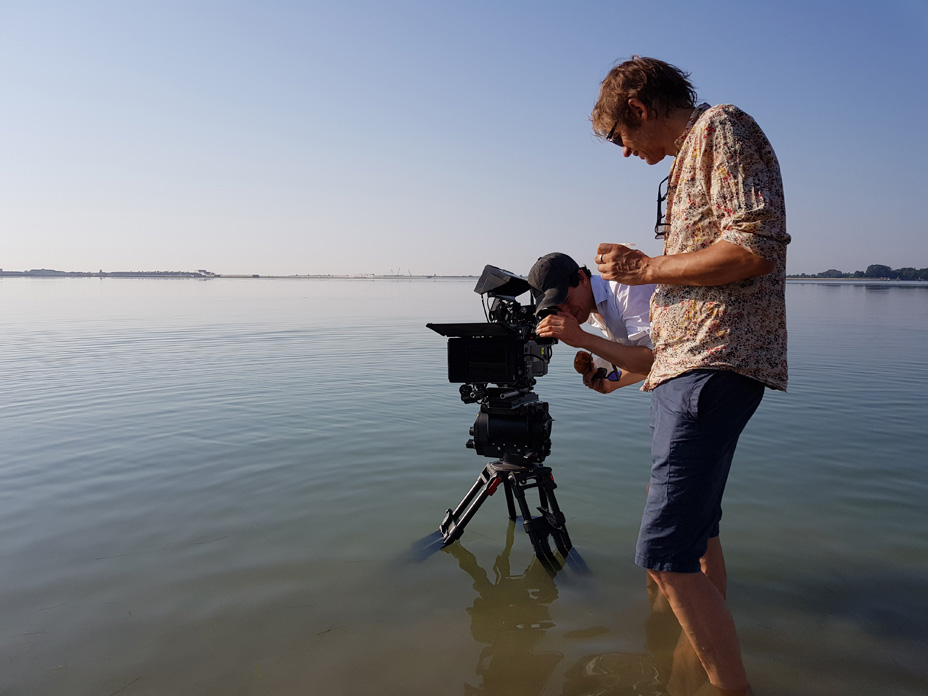 But Landais gained access to closed-door locations, secured the 30 percent Italian tax credit and set up local crews with the help of local production company Mestiere Cinema, which has helped to produce many of Venice’s big-budget productions.

Enrico Ballarin, a producer at Mestiere Cinema, says there’s one film that always comes up when he starts speaking with directors. “We get a lot of requests for romantic or mystery stories, given the look of the city, but one of the requests that we often get from directors is to have the Don’t Look Now look. That film was very powerful for the message that the town can transmit,” he says of the classic 1973 occult horror film starring Julie Christie and Donald Sutherland that played on Venice’s water motives, as well as the color red throughout the city. “But luckily it offers a lot of possibilities, for shooting interiors, palaces, museums. Everything is a piece of art or history, literally.”

Venice’s nearly pristine exteriors make for perfect shooting conditions for many period films. “We were able to shoot things that have never been used in a film before, including the extraordinary Gardens of the Palazzo Soranzo Cappello, the ones that inspired Henry James to write The Aspern Papers, as well as the Palazzo Dona Dalle Rose and the Palazzo Widmann,” says Landais. “I wanted to create something really special, of course, and not just shoot the typical Piazza San Marco image of Venice.”

When it came down to it, shooting in Venice provided one unbeatable benefit for Landais: it was the main draw for his actors. “The location was the first thing that Jonathan asked me about the film,” he recalls. “There are just so few films shot on location today, so shooting in Venice was really important to him.” 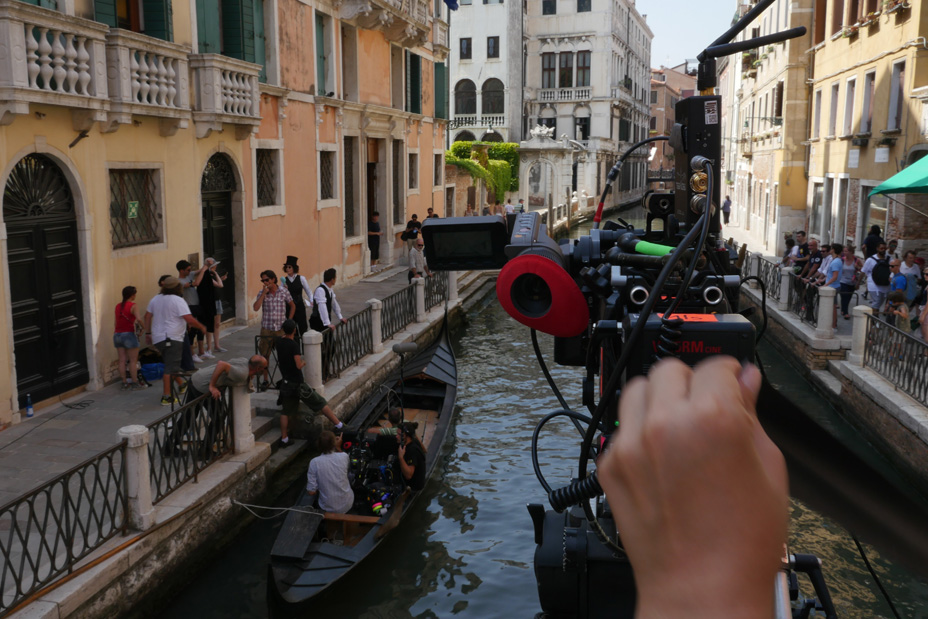 “I think that it’s the biggest natural set that we have in the world,” says Ballarin of his city. “There’s not too much you have to build there.”

Although that does come with its own challenges. “It was pretty difficult, I must say of course with a few of the exterior scenes. We had to block people coming through. Even though Mestiere is used to it, there were so, so many people,” says Landais. “It definitely delayed our shooting. People were very nice, and took pictures with Jonathan. And of course you want to keep things under wraps, but there were a lot of pictures on social media because people, and of course paparazzi can shoot from across a canal. It’s impossible to have a closed set in Venice.”

“I can only say that the most important thing is to prepare very, very carefully what you have to shoot in Venice, because the logistics are essential. They need to be well organized, not being on wheels, being on boats, and having a limited amount of space,” says Ballarin. 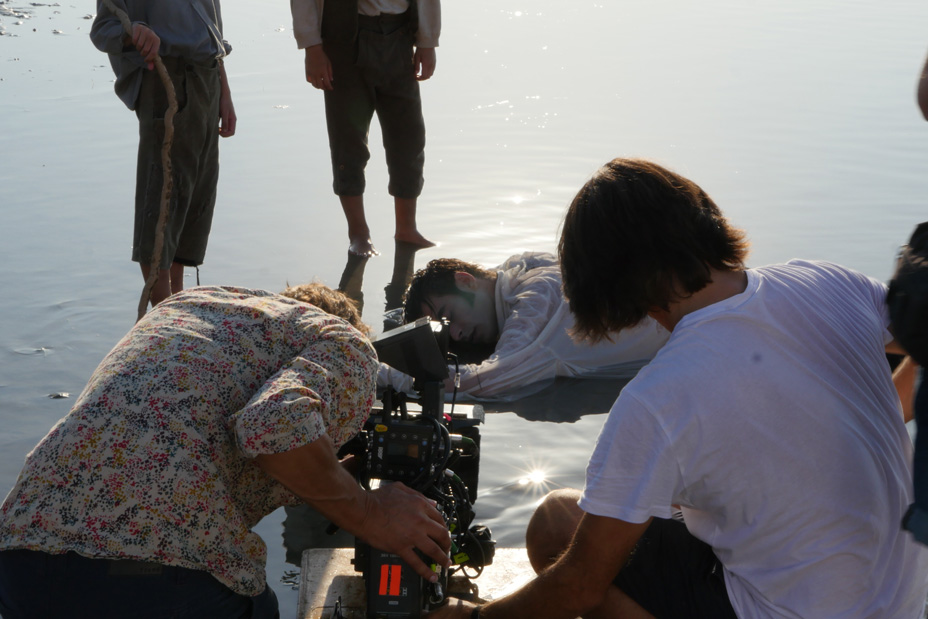 “It was very, very tight. There were two days when I was very, very afraid that we wouldn’t manage,” he says of his busiest shooting days, noting that the late arrival of one shooting boat on the canal threw off the entire day. “If there’s a one-hour delay, then everything can be dreadful. Things were hellish in a way, but we managed.”

The city might not be ideal for the type of director that likes to change course last-minute. “It happened with Woody Allen where he changed his mind on the day of shooting, and it’s a huge production,” he says of Everyone Says I Love You. “He preferred to shoot a different angle, and we had to move 35 boats on the spot to make it work. It was really something.”

But even on the most controlled set, it’s impossible to account for what goes on in the waters beyond. “We had the most beautiful shots of Vanessa going through San Michele island, just in the magic hour,” says Landais. “And two motor boats sped through the canal behind her which we had to erase then in post.”

For Ballarin too, even dealing with the massive tourism problem can be managed. In 2004, they worked with the city to block off large sections of San Marco Square during the high tide to shoot Casanova for Disney, complete with a full array of horses and carriages.

“The good thing in Venice is you always have an alternate path, so you can ask people to take a different route,” says Ballarin. 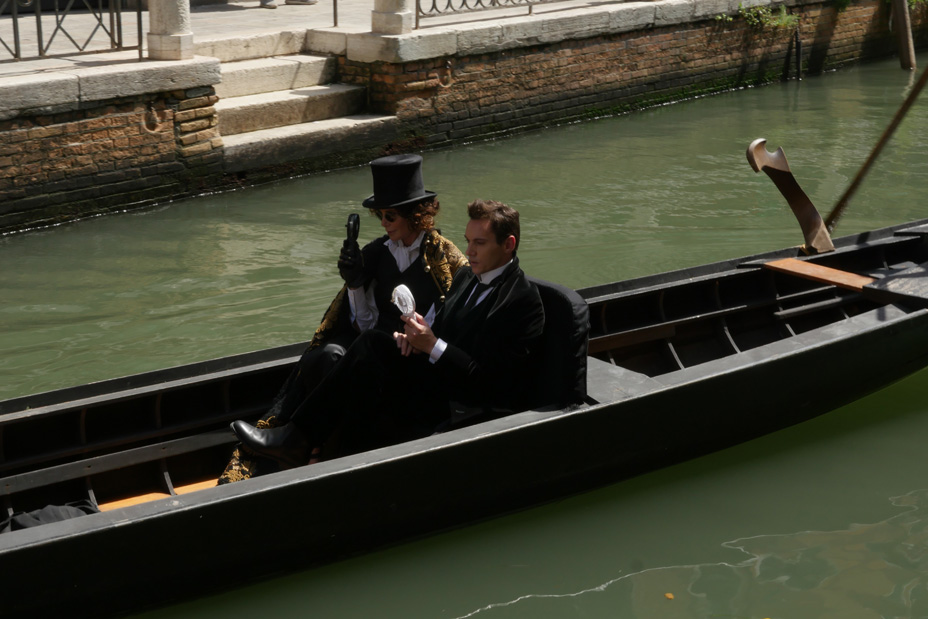 And even Venice’s delicate heritage state doesn’t prevent it from being the site of several memorable action scenes. Ballarin just stresses that extreme care must be taken to protect the town’s fragile structure, as was the case with high-speed action sequences they shot for The Italian Job and Casino Royale.

“In both cases, we had to make a lot, a lot of rehearsals to make sure that it was just right. We had to shoot big jump scenes, so we rehearsed everything in the open lagoon. When we went to the locations, we knew exactly what we had to do,” he explains. “We cleared the entire canal and made many, many safety arrangements to make there sure there would no accidents, and no harm to the town. We had to put together a lot of agreements with each ministry. Of course, it’s not cheap, but these scenes are never cheap.”

Ballarin says that the city is also relaxing laws to make shooting in the city even easier going forward, such as easing up on drone restrictions. “If you do things by the book,” he says, “you can always find a way to do the things you need to do.”