Jeffrey Seller, the producer whose penchant for Broadway long-shots paid off with Rent, Avenue Q, In the Heights and Hamilton, less so with The Last Ship and The Cher Show, looks to have a new hit ready to go — only this time he’s backing familiar material. Fly, which just opened at La Jolla Playhouse in San Diego for a monthlong tryout, is yet another take on the adventures of Peter Pan, Wendy, the Lost Boys and Captain Hook.

With dozens of stage and screen iterations over the last century of author-playwright J.M. Barrie’s fanciful works, does the world really need one more? Especially so soon after the Harvey Weinstein-backed Broadway dud Finding Neverland?

'Back to the Future' Broadway Musical Set for 2023

Probably not. But if we’re gonna get one it might as well come from this mostly elite team, which includes Seller (working as director for the first time since his college days) — plus the nonpareil choreographer Andy Blankenbuehler (Hamilton, Fosse/Verdon, In the Heights) and costume designer Paul Tazewell (Ain’t Too Proud, Summer, Hamilton, Jesus Christ Superstar and too many more to count).

Fly’s lighting designer Howell Binkley and set designer Anna Louizos are also veterans of numerous hits, including Hamilton and In the Heights, respectively. Though there’s no official word, it’s tough to imagine that the slickly packaged, visually spectacular show created by all these pros won’t be taking off for Broadway soon, like many La Jolla productions before it.

The material is no less fun for being so familiar; we know just what’s about to happen the moment the taut ensemble (doing triple-duty as musicians and stagehands, too) wheels out a giant window-casing with a billowing white drape ready for Peter’s entrance.

But this seasoned cast doesn’t just leap in the air for a few moments of novel distraction. Aerial designer Pichon Baldinu has them soaring from floor-to-rafters so quickly you feel it in your throat. The actors swoop and hover (Mission Impossible-style), spin and run through the air. Then just as magically, they disappear into the clouds. Of course it isn’t magic, it’s an elaborate system of harnesses in plain sight, snapped on as part of the choreography — a suggestion perhaps to the kids in the audience that this is a fantasy and jumping on the bed alone will only get you so far.

The book by Rajiv Joseph (Bengal Tiger at the Baghdad Zoo) is based on Barrie’s 1911 novel Peter and Wendy; it’s a variation on probably the world’s most familiar Peter Pan — Jerome Robbins’ indelible 1954 musical starring Mary Martin as Peter, which lived on via original-cast TV specials and then in reruns for decades. 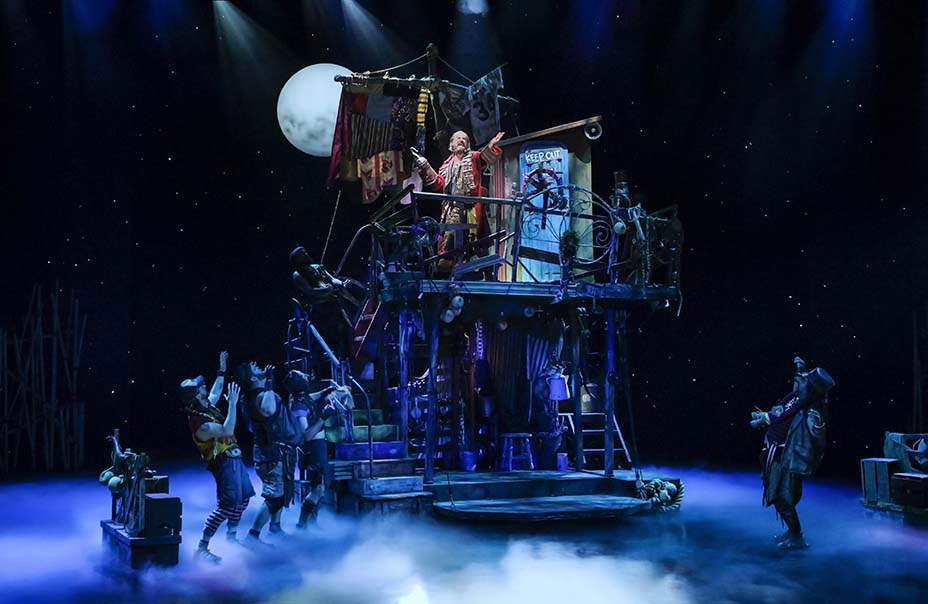 In this new take, Wendy (Storm Lever) is the star — a curious teen worried and wondering about adulthood. Peter, now played by a man (nimble Lincoln Clauss), is still the eternal boy, and the conduit for the grown-up revelations Wendy must face both in the midst of their adventures in Neverland and back at home.

Lever, a vocal powerhouse who elevated 2017’s Summer with her performance as the young Donna Summer, is once more a delight — something she manages in spite of Bill Sherman’s meandering score.

This mishmash of pop tropes and overwrought high notes subbing for substance attempts to sound like “modern Broadway” and would probably be passable if it contained at least one really great melody or even a hummable hook. But alas, not much sticks.

Speaking of hooks… There is one very cute song, “I Miss My Hand,” a delicious bit of comedy delivered by Eric Anderson as a Captain with mommy issues — leader of a ragtag band of misfit pirates who are outwardly tough, inwardly dim, cowardly, effeminate et al., as painted with very broad strokes by Joseph, who also co-wrote the lyrics with Kirsten Childs (The Bubbly Black Girl Sheds Her Chameleon Skin). Together they all probably push the swish-buckling to its PC limit, but let’s face it, it’s very funny.

Elsewhere in designer Louizos’ enchanting swamps and bamboo lairs are the winsome Lost Boys, who shine in a couple of Blankenbuehler’s rousing production numbers, while yearning for a mom to tuck them in at night. But they face more pressing issues first, among them avoiding the glamorous, treacherous Crocodile, played by Liisi LaFontaine, who wears, hands down, one of Tazewell’s all-time best costumes.

The same cannot be said of the “The Trees” — the character name given to the nine female dancers largely marginalized to interstitial segues and other yeoman’s work in dim lights and dark unitards. It’s all nicely carried out, but I kept waiting for their moment, which felt odd when it didn’t materialize. When there’s a sublime choreographer who also happens to be a great storyteller, plus his creative partner, co-choreographer Stephanie Klemons, and a fairly big cast, rare in an age of shrinking ensembles, why has Seller trapped these women into subservience?

Fly is a passion project Seller originally staged at Dallas Theater Center in 2013, but then shelved as Hamilton took off. It isn’t particularly deep but does already appear quite polished, with most of the ingredients for commercial success in place. While the creation of an original score (also a rarity today) is admirable, audiences don’t leave the theater humming good intentions. There would be no shame in dropping in one or two 1950s Peter Pan classics, notably Jule Styne’s “Never Never Land” or Moose Charlap’s “I’m Flying.” Those are slam-dunks. Fly isn’t quite one, yet.