For costume designer Daniel Orlandi, dressing the film Ford v. Ferrari proved to be a study in contrasts. Debuting on Friday, Nov. 15, the film tells the true story of a pair of inventive car designers (Academy Award winners Matt Damon and Christian Bale) who join forces with the Ford Motor Co. to compete with Ferrari at the 1966 Le Mans 24 Hour Endurance race.

From the boardroom to the racetracks, Orlandi had his work cut out for him. “We had all these different worlds that contrast — a showman Texan with his band of misfits, Ford executives in the ’60s, and old-world Italian with Ferrari, plus three different races — Willow Springs, Daytona and Le Mans. I really didn’t know this world. And when they first sent me the script, I thought, ‘I really don’t want to do this,’” the Emmy-award winning designer notes, “It’s really more than just car racing, it’s about friendship, loyalty and the love of the game.”

Orlandi first looked to the period-appropriate and classic racing films of his youth — James Garner’s Grand Prix (1966) and Steve McQueen’s Le Mans (1970) as well as footage about the historic Le Mans race and books on Carroll Shelby, a “larger than life Texan” car designer and race car driver played by Damon. 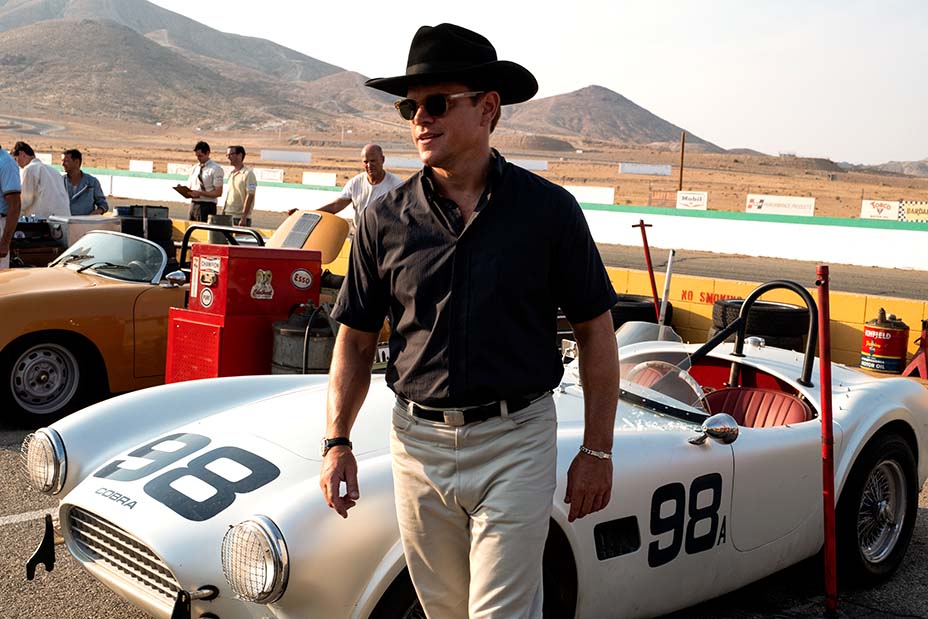 Careful not to over-exaggerate his Texan persona, Orlandi noted that Carroll had two sides to him — “hanging out with the guys and dealing with executives in the Ford boardroom.” This translated into his signature striped bib overalls paired with a Stetson hat, crocodile cowboy boots and suits suitable to the period. The designer, whose father worked for Chrysler, explains, “Shelby was California cool with a Texan look — light chino pants and Ban Lon polo shirts; my dad would say he was a sharp-dressed guy.”

To complete the transformation as the curly-haired racer-turned-designer, Damon received his first hair perm — noticeably peeping out under his custom-made Stetson. His counterpart, British race car driver Ken Miles (Bale), spends the majority of his screen time in a racing suit and overalls. As the designer says, “He is a Brit working here and much more of a mechanic and a family man; although one of the Ford execs called him a hippie. We made all of his workwear, which needed to be aged, and I needed to make everything feel worn and vintage.” As the wife of a mechanic, Miles’ wife is similarly dressed down and clothed in old Wrangler jeans from the ’60s with cotton sweaters. 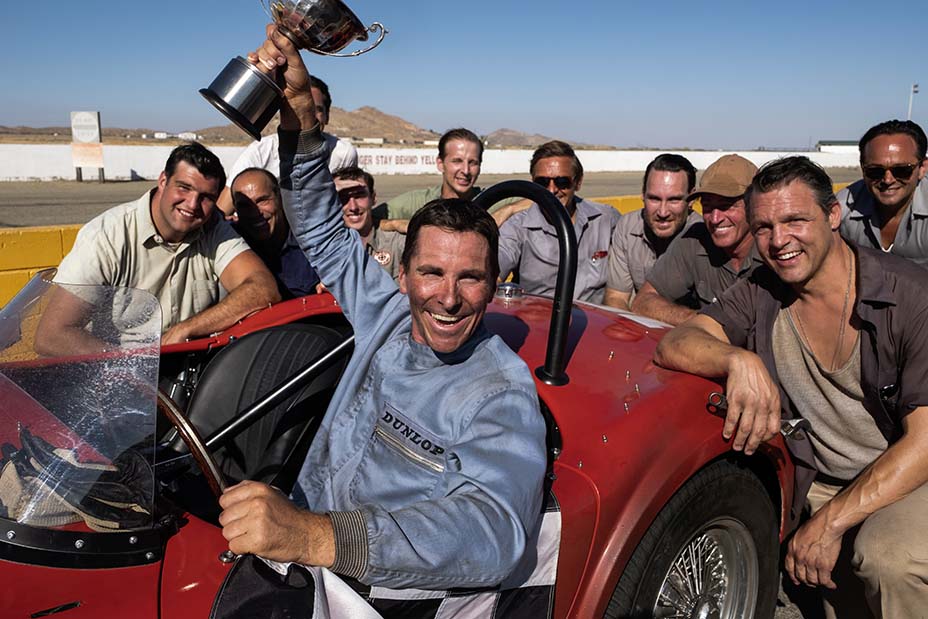 The boardroom suits are appropriately clad in classic Brooks Brothers button-down shirts and blue blazers, each depicting an air of “old money.” The designer drew inspiration from archival images of the automotive scion Henry Ford II, detailing, “We used some Brooks Brothers shirts and his clothes were very traditional. He always wore navy blue with plain navy-blue ties.” Orlandi gave each executive their own personality through color, dressing Josh Lucas’ Leo Beebe in darker suits, noting, “I wanted his clothes to look oilier, as he was a slick character.”

Jon Bernthal’s Lee Iacocca is the flashiest of all, as the designer dressed him in Italian vintage sharkskin suits with thin ’60s period ties. For Ford’s Ferrari counterparts, Orlandi wanted a complete contrast that denoted an “Old World aesthetic “for the executives filled with browns, creams, knit ties, and vests to counter the “Space Age ’60s” looks for Ford. “I wanted the Ferrari uniforms to feel like an Italian military jumpsuit,” says the designer. A mix of vintage and custom, the costumes totaled more than 1,000 with clothes ranging from the pit crew to race patrons in the crowd. 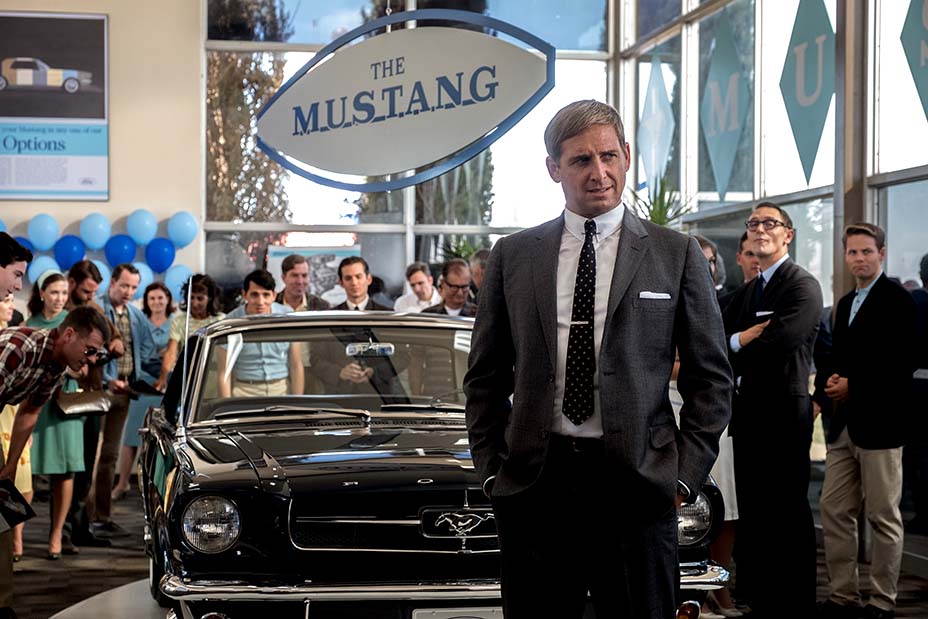 Working in conjunction with the film’s production designer, François Audouy, the three major races each had their own color palette for the costumes as well as the aesthetic of the set designs. “Willow Springs was sun-bleached women in short skirts and Keds with the men in polo shirts and chinos; Daytona was more cowboy and East Coast looks; while Le Mans had a richer color scheme,” says Orlandi.

The racing uniforms for the drivers and crew differed from each race, as well, with white for Le Mans and a dull blue for Daytona. As luck would have it, the designer found an original crew member living in Los Angeles who gave him a shirt to copy for Shelby’s Daytona race. For the pit crew and racers, Orlandi says, “We needed authentic clothes and had to make them fireproof — back then they were fire-resistant. The quote at the time was race car drivers didn’t live long!” 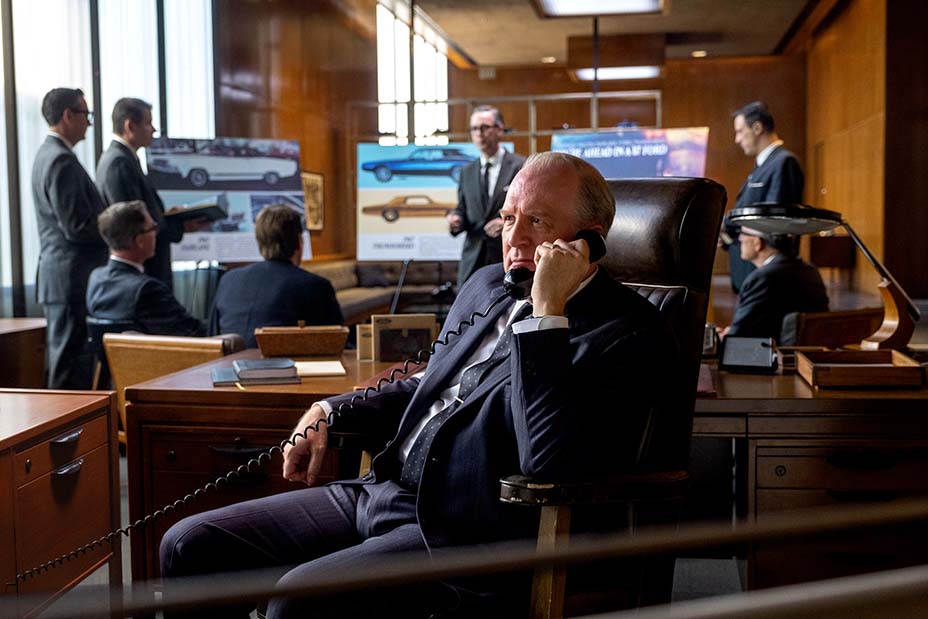