Continue to The Hollywood Reporter SKIP AD
You will be redirected back to your article in seconds
Skip to main content
September 27, 2018 11:52am

Radio host and Fox News contributor Kevin Jackson referred to Brett Kavanaugh’s female accusers as “lying skanks” in a series of tweets on Thursday that led to his termination.

“#ChristineBlaseyFord academic problems came from her PROMISCUITY!” he wrote on Twitter during Ford’s Senate testimony. “Dang girl, stop opening your legs and OPEN A BOOK!”

On Thursday morning, he tweeted, “TO HELL with the notion that women must be believed no matter what. Lying skanks is what these 3 women are, and we ALL know more.”

Jackson also said on Twitter that Ford “looks rode hard and put up wet, as we say in the country.”

On Thursday evening, Fox News said it has cut ties with Jackson. “Kevin Jackson has been terminated as a contributor,” a spokesperson said. “His comments on today’s hearings were reprehensible and do not reflect the values of FOX News.”

Speaking generally about liberal women, Jackson had said that “leftist women are skanky for the most part.”

Back in December, Jackson had his wrist slapped when he suggested on Fox News that FBI agents who disliked President Donald Trump might have pondered “an assassination attempt.”

At the time, a network spokesperson told The Hollywood Reporter that Jackson’s comment “was addressed with him.”

A spokesperson did not initially provide a response when asked about Jackson’s comments on Thursday, several hours later issuing a statement about his termination.

On Sept. 20, Jackson called the Ford allegations “MeToo bullshit at it finest.”

He has appeared on the Fox News channel for years, though it’s not clear when he became a contributor. 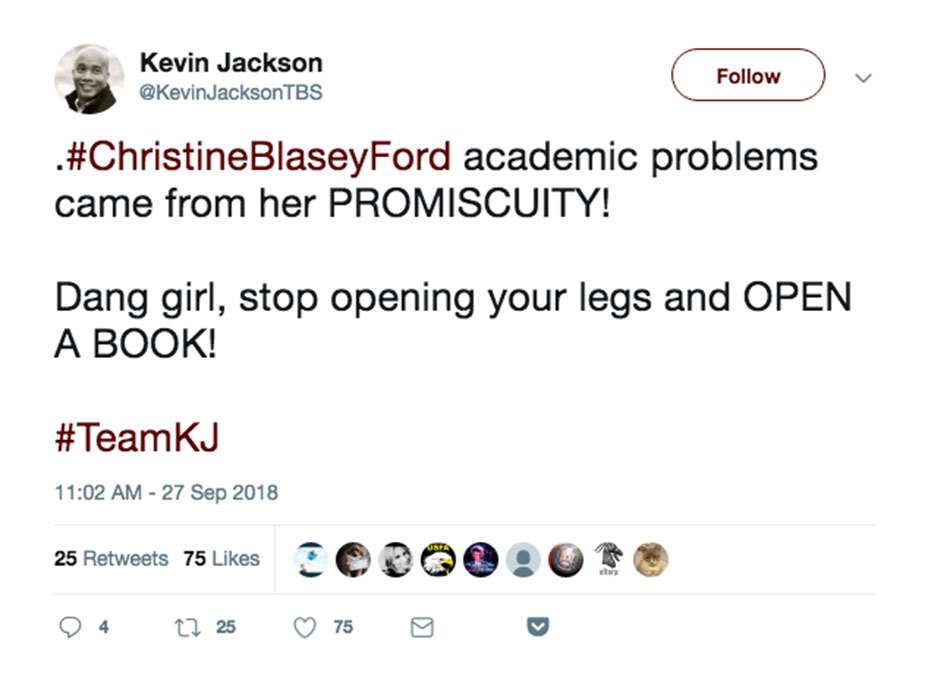 I disagree. Feminists are their own worst enemies, and enemy of women.

Also, they want men to NEVER be believed. I’m not succumbing.

TO HELL with the notion that women must be believed no matter what. Lying skanks is what these 3 women are, and we ALL know more#TeamKJ https://t.co/qGVJLTv6QI

It wasn’t challenged, because Leftist women are skanky for the most part.

More will be sued and made to pay for their lies

Wow, #ChristineFord looks rode hard and put up wet, as we say in the country. Just peeked into this FARCE.#ConfirmKavanaughNow #TeamKJ