Across cable news, the salaries paid to on-air contributors remain shrouded in mystery, ranging by network and by market demand for the contributor’s expertise. But, because at least 10 former Fox News contributors have served in President Donald Trump’s administration and been forced to file financial disclosure forms, a window into the network’s payroll has been opened.

Among the eight Trump staffers who were forced to disclose what Fox News paid them to contribute, salaries averaged about $141,000 and ranged from a low of $31,336 for New York socialite Georgette Mosbacher (who serves as ambassador to Poland) to a high of $569,423 for John Bolton, who now serves as Trump’s national security adviser.

Another U.S. ambassador, former Massachusetts Sen. Scott Brown, earned a salary of $175,000 while working for the network between May 2013 and 2017. Richard Grenell, now the U.S. ambassador to Germany, earned a salary of $80,000 while serving as a Fox News contributor for about three and a half years, until December 2016. K.T. McFarland, who withdrew her nomination to serve as ambassador to Singapore, earned $63,518 per year during her nearly seven-year run as a Fox News national security analyst.

Anthony Scaramucci, who had to file a financial disclosure form as a precondition for his 11 days of service as White House communications director, revealed that he earned $88,461 as a Fox Business Network contributor. Tony Sayegh, spokesperson for the Treasury Department, earned a salary of $72,851 at Fox News.

Two members of the Trump administration, Sec. of Housing and Urban Development Ben Carson and White House senior adviser for strategic communications Mercedes Schlapp, have served as Fox News contributors, but did not disclose what the network paid them on the OGE Form 278e documents they filed.

Sebastian Gorka earned $4,320 for spending one month (January 2017) as a paid “counter-terrorism strategist,” later returning to the network as a contributor after serving briefly in Trump’s administration. (He recently separated from the network.)

One former Fox News host, Heather Nauert, earned a salary of $485,000 before exiting the network in 2017 to serve as a spokesperson for the State Department, a position she’s slated to leave after withdrawing her nomination to serve as U.S. ambassador to the United Nations. According to his financial disclosure form, Bill Shine earned a salary of $1.46 million while serving as co-president of Fox News.

A Fox News spokesperson would not comment on how the network decides contributor salaries, but a person with knowledge of the process said that many non-famous contributors start with a per-appearance fee agreement that provides them with a small guaranteed retainer for agreeing to be exclusive to Fox News. If the person resonates with Fox’s audience and delivers ratings, the network would likely offer them an annual, flat-fee contract, firming up their contributor status.

At least two current and former members of the Trump administration have worked for non-Fox cable networks. Director of the National Economic Council Larry Kudlow served as senior contributor for CNBC from March 2014 to March 2018, but did not disclose his salary. Matthew Whitaker, who served as attorney general on an interim basis, earned $15,000 while serving as a legal commentator for CNN from July 2017 to September 2017.

While CNN’s contributor salaries are also a trade secret, THR has learned that one former contributor who left the network in the past two years earned a salary of about $75,000 per year. 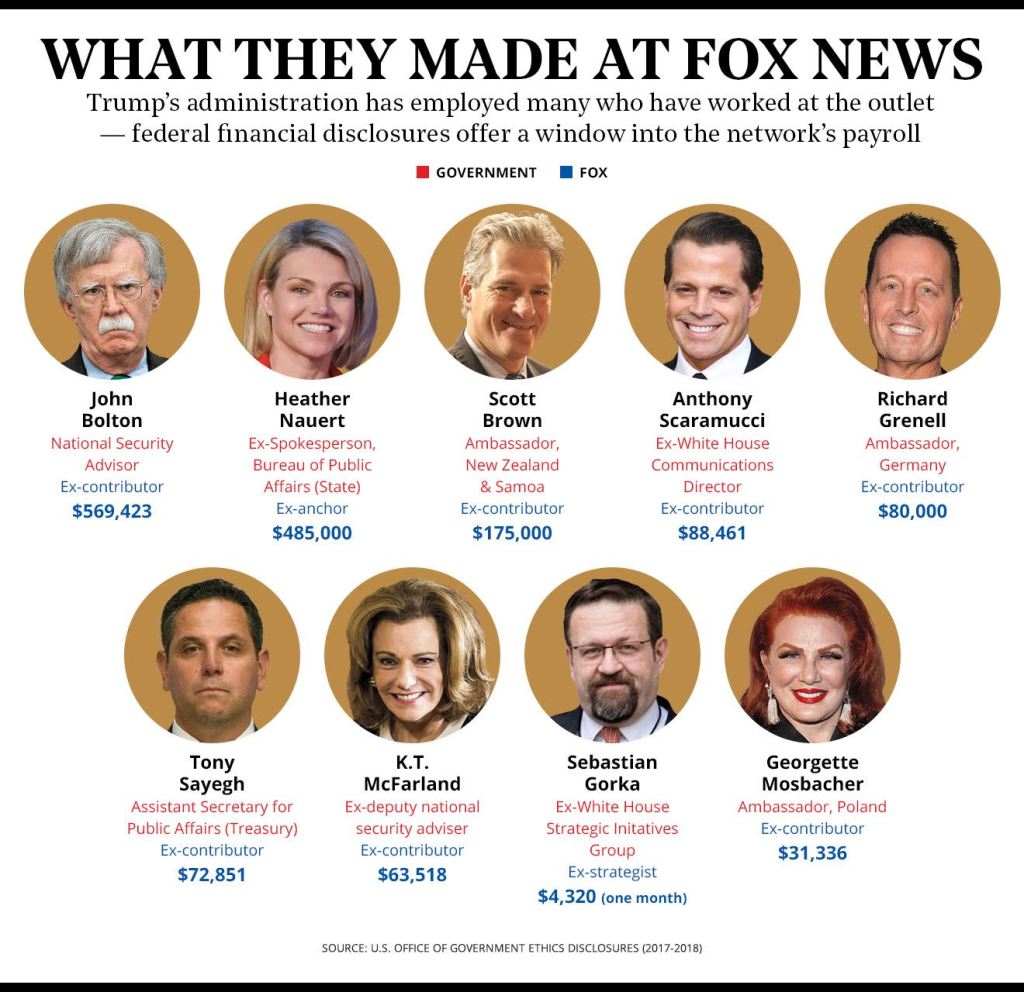 How Far Is Too Far for Cable News Contributors? No One Really Knows for Sure