The most divisive election in recent memory is also proving fractious at Fox News after Sean Hannity called out colleague Megyn Kelly on Twitter for supporting Hillary Clinton on Wednesday night.

The fracas started after Kelly slammed Trump for only taking “safe” interviews with the likes of Hannity. “Donald Trump, with all due respect to my friend at 10:00, will go on Hannity and pretty much only Hannity and will not venture out to the unsafe spaces these days, which doesn’t exactly expand the tent.”

Replying to a Mediate post on the topic, Hannity tweeted that Kelly should instead be mad at Hillary Clinton, and then followed that up with the rather blunt assessment that her failure to do so meant she “clearly supported her.” Hannity further claimed that Trump did, in fact, speak to Kelly.

When some Twitter users suggested that Hannity should show more loyalty to his colleagues and stand by them, he replied curtly “sure. When they stand by me.”

Hannity may have been alluding to previous criticism from Kelly particularly after the first debate when she suggested that he wasn’t a journalist. “We’ve got Trump speaking to our own Sean Hannity. We’ll see whether he speaks to the journalists in this room after that interview,” Kelly said immediately after the debate.

In 2013, Kelly took the coveted 9 p.m. slot on Fox News in a reshuffle, a slot previously held by Hannity. The Fox veteran’s show was moved to 10 p.m. 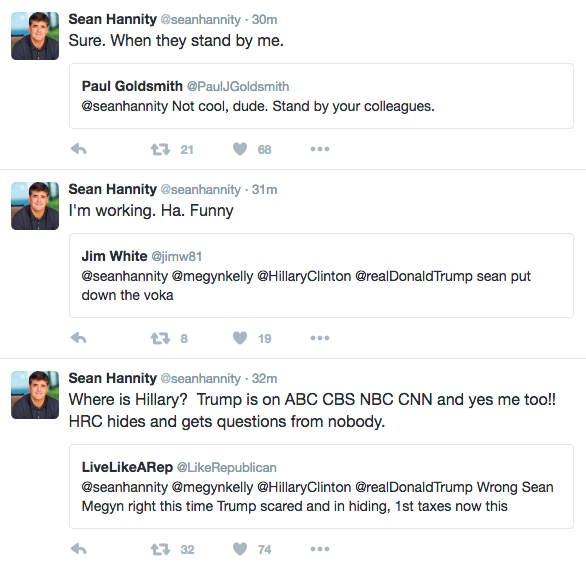