Brad Pitt, very much in the public eye after a well-received performance in Once Upon a Time In Hollywood, is back in theaters on Sept. 20 with Ad Astra. Directed by James Gray, the movie has Pitt starring as astronaut Roy McBride. When mysterious events begin occurring around the world and the safety of the planet at stake, McBride is called upon to travel to deep space to investigate. The reason he’s selected is that these events may be tied to his father Clifford, an astronaut himself who disappeared decades ago but who, it turns out, may still be alive.

The movie is one of the titles inherited by Disney when it acquired Fox earlier this year. Other Fox holdovers such as Dark Phoenix and Stuber have disappointed at the box office, and with a mid-teen millions opening weekend forecast by tracking estimates the movie would have a long way toward breaking out as a hit. However, Ad Astra is being positioned as awards contender, with an 82 percent “Fresh” rating on Rotten Tomatoes based on positive early festival reviews backing that up.

To sell the movie — not based on any existing property or material — the studio has run a campaign focused on the emotional drama of Pitt’s McBride and how he deals with his personal issues while also trying to save the world.

An astronaut — presumably Roy — is floating in mid-space on the first poster (by marketing agency WORKS ADV), his body fuzzy as if it’s being distorted or pulled apart in some manner. The mysterious nature of the story is communicated through the copy “The answers we seek are just outside our reach.” Later that month the second poster came out that showed Roy looking out from his helmet. The third poster, released in July, shows Pitt’s face more clearly as he stands in what seems to be a space station. The same copy from the first two posters is used again here.

A silhouette of Pitt is seen on the IMAX poster, the sun shining over one shoulder and a field of stars shown within the outline of his body. Floating there is the same fuzzy astronaut seen on the first poster, this time seen to be hurtling toward Earth without the benefit of a ship or other protection other than his suit. On the Dolby Cinemas poster the focus is more on perspective, the shadow of an astronaut and his space station seen as small and seemingly insignificant against the massive fiery glow of the sun in the background.

The first trailer (5.3 million views on YouTube) finally debuted in early June after months of anticipation. It immediately establishes that Roy is driven to be the best astronaut he can because he’s following in his father’s heroic footsteps. An incident on a mission lands Roy in the hospital and it turns out there were several similar ones around the world. They may be related to what appears to be the return of his father after being presumed missing in deep space decades ago. Roy is sent to find out what’s happening, a mission that won’t be easy or safe.

Another trailer (2.8 million views on YouTube) came out in mid-July. Some sort of crisis is facing the world and the key to resolving it involves Roy finding his long-lost father. There’s some dramatic footage shown involving space exploration along with helpful exposition from various characters. It’s a tighter message than what was used in the first trailer but it still may play as a bit vague, at least for the general audience.

IMAX debuted an exclusive third trailer (136,000 views on YouTube) in August. This one begins with Roy talking about the inspiration he draws from the example of his father. After we see him go through his evaluations, the mission is explained: He has to stop an event that could erase the entire solar system. The stakes are high, then, as Roy navigates his personal feelings and the hostile environment of space.

The movie was part of the studio’s presentation to exhibition executives at CineEurope in mid-July 2018, but mostly conversations around the movie were focused on when it would finally be done and where any sort of marketing for it was, even just months before it was scheduled for release.

As soon as the first trailer was released it was repurposed as a promoted tweet to increase the reach of the spot. Just a few days later a cut-down version of the trailer was used in an extended TV commercial that jettisons most of the familial backstory to focus on Roy being sent on a vague mission to outer space. Another commercial — also featuring a 60-second runtime — was more about the threat being faced while also including mention of Roy’s father. Shorter commercials continued to be released throughout August and September that highlighted various elements of the story, including the secrets being kept, while continuing to sell the overall spectacle of the film.

Additional commercials came from IMAX that focused on the spectacle of the film and encouraged audiences to see it in the biggest format available.

Pitt introduced a promotion for the movie in a special video that aired during week two of the NFL season on Fox.

A featurette was released in late July on the 50th anniversary of the Apollo 11 moon landing, with Gray talking about the nature of space travel and how his film expands on the human tendency to look for adventure among the stars. Another featurette about a month later offered more details of the movie’s story, selling audiences on the epic scale of the movie.

The movie’s world premiere took place last month at the Venice Film Festival, with appearances by Gray and the cast. That screening generated positive reviews and awards buzz.

A clip released in early September offered an extended look at the chase action sequence involving moon rovers. A second has Roy being briefed on the details of the mission he’s being sent on while a third pulls footage from early in the film to show Roy one of the story’s inciting incidents. An exclusive clip of Roy investigating an abandoned ship was given to IMAX as well. There was also a promotional video that focused on how composer Dev Hynes incorporated sounds recorded from space into the film’s score.

Ever since the project’s inception, Gray has emphasized his desire to make the space sequences in the movie as realistic as possible. That effort was communicated to the audience through two promotional partnerships:

? NASA itself got involved, hosting a live-streamed event featuring Pitt participating in a Q&A with the crew of the International Space Station. Later on, Pitt and Gray were joined by NASA staff to talk about the film and their research during production.

? Virgin Atlantic was also a promotional partner, using footage of the film showing the company to be a key provider of travel to the moon in the future in commercials.

Online ads used video snippets along with elements pulled from the key art to drive traffic to the movie’s official website and get people to buy tickets.

Those seeing the movie in XD at Regal Cinemas location opening weekend will receive a mini version of the second poster, while those opting for IMAX screenings at AMC Theaters will receive an exclusive pin designed to look like a NASA mission patch.

Final commercials labeled the movie as the must-see event of the year, making an explicit call via pull quotes from early reviews to see it on the big screen. 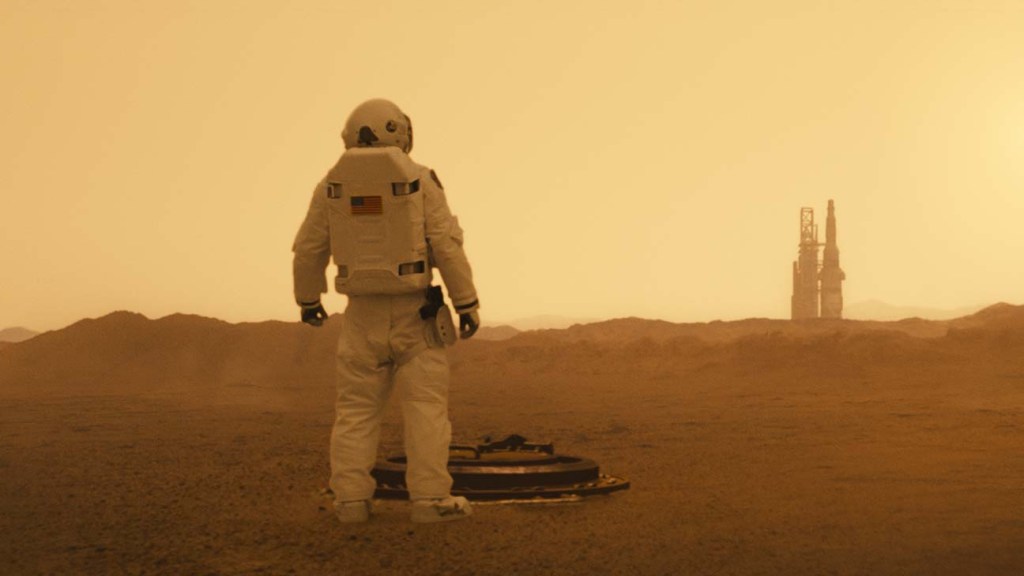 There’s an interesting dynamic formed as various appeals and messages vie for contention throughout different elements of the campaign.

The minimalist aesthetic of the posters, featuring just a single image in an attempt to convey the solitude of space and the dangers posed by the vast nothingness astronauts operate in, is countered by the clips released later on that pull out as many explosions and lunar rover chases as possible.

The intimate nature of the story conveyed in the trailers is countered by the way the movie is sometimes presented by IMAX, not Fox, and the message that it must be experienced in as immersive a manner as possible.

Through all of that, Pitt’s Roy McBride is shown to be a good soldier who stoically does his duty when called upon. That the mission he’s tasked with also holds the promise of providing closure on a very intimate matter — the disappearance of his father — makes success vital on both a personal and professional level.

Fox has focused on Pitt throughout the campaign not only because of his status as one of Hollywood’s biggest stars but because there isn’t the built-in appeal of an existing franchise of IP to fall back on. It’s hoping that audiences, at least those who aren’t rushing to revisit the residents and servants of Downton Abbey, will come out for the spectacle and drama and help propel the movie into awards contention.