Lack of parity for women — behind the camera, in the front office, on the payroll — long has been one of Hollywood’s most intractable obstacles. Year after year, new studies reveal the same dreary landscape, with statistics vastly outnumbering solutions and attempts to address the issue scattershot at best. Shortly after becoming president of the non-profit Women in Film in 2011, producer Cathy Schulman was struck anew by this stagnation. “I was standing up in front of a group of people doing yet another speech about the lack of parity in Hollywood, and I felt, ‘How could I possibly be running an organization like Women in Film and repeating statistics that have essentially been flatlined since 1998?’ ”

She reached out to her good friend Keri Putnam, executive director of the Sundance Institute, and their organizations launched the Female Filmmakers Initiative. What began as a research project now has transformed into a movement among a supergroup of Hollywood insiders who are poised to lead concrete, lasting change.

Dubbed ReFrame, the initiative is launching with 52 influential executives and creatives from across film and TV who quietly have been plotting priorities and strategy for two years and now are going public with their message. “Sending out these senior-level ambassadors to meet with top executives and decision-makers at studios, networks and agencies is a very collegial approach,” says Putnam. “It isn’t about outsiders saying what should be done.” 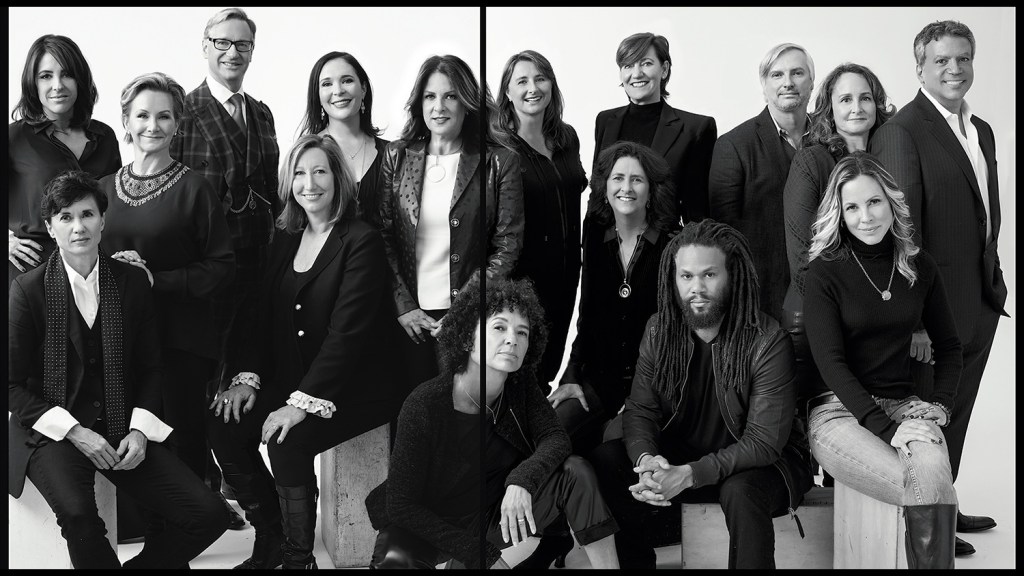 The group, which first convened in October 2015 for a top-secret two-day summit, is diverse in gender, race and affiliation — with just two elements in common: industry power and an interest in making progress for women. “I marched right up to [CAA’s] Rowena [Arguelles] and Maha [Dakhil] and gave them a hug,” says WME partner Adriana Alberghetti. “This is about something much bigger than the bullshit of agency warfare.”

After absorbing research, listening to guest presentations from the tech, finance and activism worlds (Dropbox global head of diversity Judith Williams’ session on unconscious bias was especially eye-opening) and huddling in smaller teams to hash out lines of attack, the group identified three specific missions. 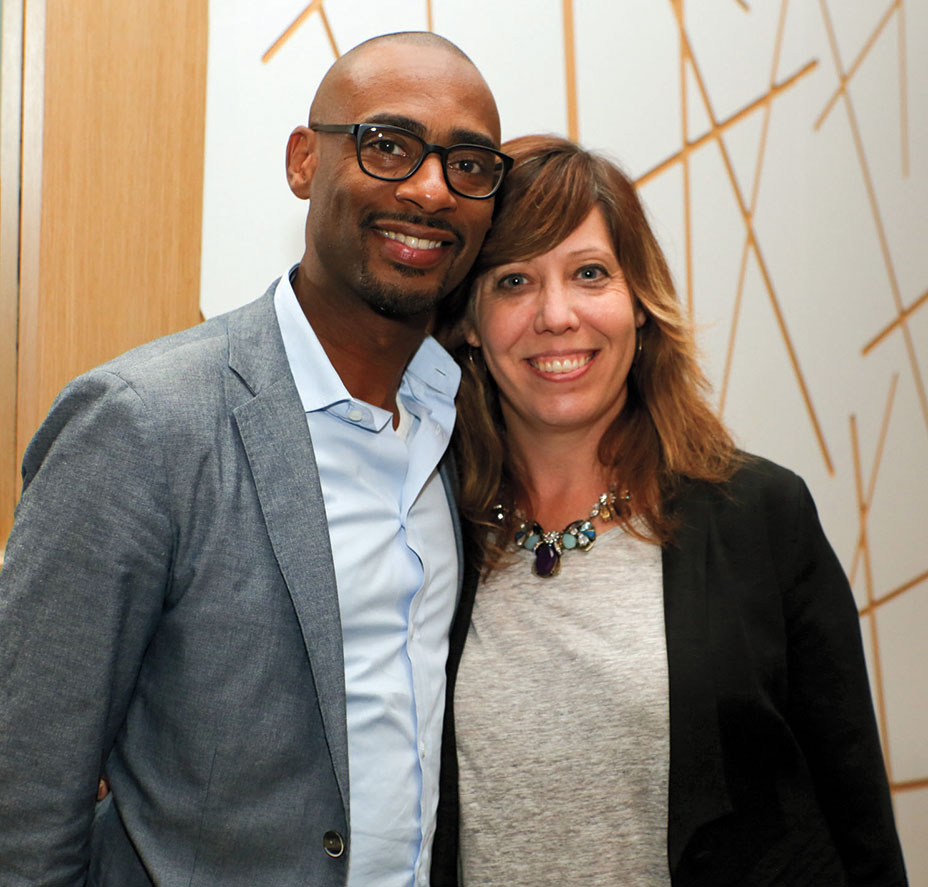 From Meryl to Mahershala: How Social Media Reacted to Award Season's Political Speeches

“We ended up on the stamp committee,” says producer Nina Jacobson, laughing alongside her best friend, Miramax executive vp Zanne Devine, at THR‘s photo shoot. Modeled after the Human Rights Campaign’s iconic equals-sign logo, the ReFrame stamp — designed pro bono by branding agency Troika — is a badge of honor for movies and TV shows that meet a certain standard of female participation (such as directors, writers, producers and actors). Think LEED certification for environments inclusive of women.

Jacobson notes that focusing on parity at the production level is more manageable, at least at first, but has pitfalls. “The potential risk is that the corporation will be like, ‘OK, great, we’ll encourage our filmmakers to do that, but it’s not on us,’ ” she says. “The challenge is to make sure studios and networks are telling the filmmakers, ‘We want those stamps. We don’t want to be the company at the end of the year that didn’t get a single one.’ “

That’s not to say ReFrame won’t be addressing Hollywood’s corporations directly: Enter the Culture Change Toolkit, a program that will educate and advise companies that become ReFrame partners on unconscious bias (the “you hire people like you” phenomenon) and how to recruit and retain diverse talent. Dropbox’s Williams will continue to work with ReFrame (managed by WIF in collaboration with Sundance, with support from BMW, The Harnisch Foundation and the Women at Sundance Leadership Council) to customize the material for partner firms. “The strategy that might work for an agency is not going to work for a studio,” she says. “The toolkit will have the flexibility to adapt.”

Producer Gigi Pritzker underscores the need to bring this training to all levels of the industry. “Unless you’re challenging all the way down the chain in both directions, it’s lip service,” she says. “It sounds so dumb and obvious, but that was revelatory for me. We have to look at people’s experiences differently than we have in the past.” Several ambassadors who are in a position to select creative talent, including Jacobson and Devine, already have committed to sending back lists of potential hires that don’t include at least one candidate who is a woman or person of color.

“My immediate goal is to get every person we meet with to sign their companies up for the unconscious bias training,” says Michael De Luca, who’s producing this year’s Academy Awards show. “If you’re a studio executive and you request a list of directors or writers from an agency and it comes back 99 percent male, make that second phone call: ‘Hey, do you have any clients that are female?’ Our brains are used to doing one thing a certain way for so long that we don’t question it. Just that little intervention of requesting a more balanced list is effecting change from the bottom up.”

ReFrame’s third focus is protege sponsorship, which differs from traditional mentorship in that sponsors will be asked to take a proactive role in recommending proteges — starting with female directors and eventually expanding to other roles — for jobs, rather than simply offering passive career advice. “Can we do basically what men have been doing in the system, which is, you’re a young filmmaker, somebody gives you a movie beyond your capacity and you learn on the job?” says director Kimberly Peirce. “That never happens for women, who are not chosen above their experience level.”

Peirce, who developed her debut Boys Don’t Cry through the Sundance Lab, had been agitating for years for a similar program for midcareer directors. Female filmmakers work far less frequently than their male counterparts — 80 percent of female directors made just one movie in the past 10 years, compared with 54.8 percent of male helmers, according to the latest study from USC Annenberg professor Stacy L. Smith’s Media, Diversity & Social Change Initiative. And a 2015 Smith study, commissioned by the Female Filmmakers Initiative that eventually spawned ReFrame, revealed a 25-point difference between the prevalence of women making independent (26.9 percent) versus studio movies (1.9 percent). “A lot of the way that we tackle the diversity issue in Hollywood is about finding new talent and getting them into the pipeline,” says writer-producer Glen Mazzara. “But there are factors that resist systemic change, and there is a turnover at the lower end that forces people back out. Straight white men can have a bad box-office opening or a show that doesn’t hit. We get to fail up in a way that other people don’t. How do we give women, people of color, LGBT or older writers their second, third or fourth chance?”

Proteges will be paired with sponsor teams of male and female senior execs who will actively advocate for them. “They’ll come in and diagnose: ‘You’re brilliant. Why aren’t you working more? I’m going to come in and call the right person on your behalf,’ ” says Peirce. “It’s what we’re all doing anyway, but this is a more codified interference with a systemic obstacle.” Adds Mazzara: “What’s important is for people in power to identify talent and say, ‘I’m going to risk some of my reputation and political capital because I really believe in this person.’ That type of relationship has been very successful in business, but it hasn’t really been implemented in Hollywood.” 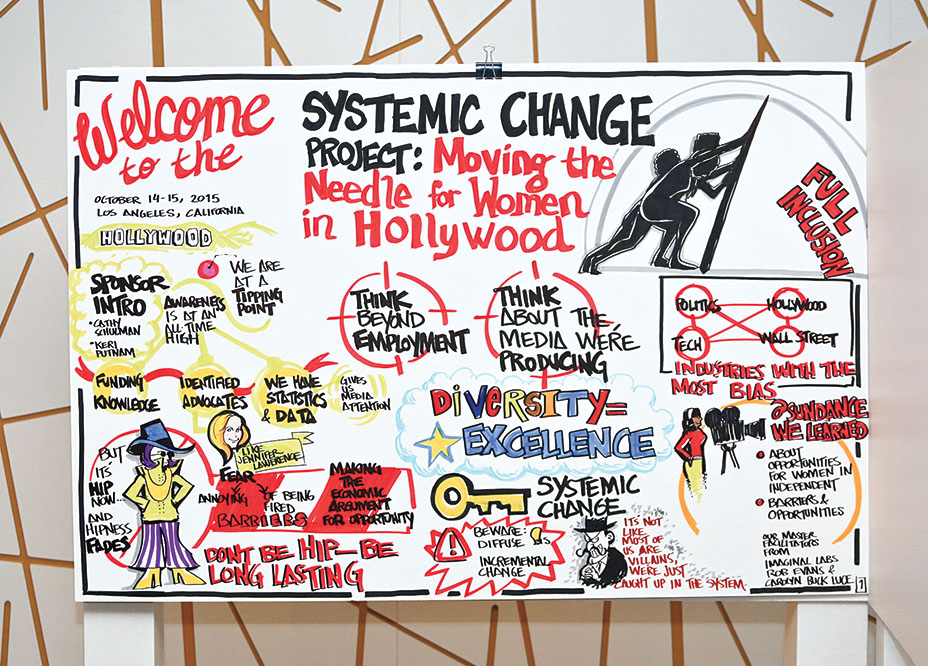 During the next three months, ReFrame ambassadors will be dispatched to meetings with companies across the industry, asking them to sign a partner pledge and participate in all three programs. Twenty-two studios and networks already have agreed to take meetings, including all six majors, HBO and Netflix. Company heads will be present, according to Schulman, who adds that the ambassadors will meet with a second batch of content distributors in the second quarter, with a goal of reaching all financiers by the end of the year. “The biggest challenge will be getting people past the idea that they are doing enough,” says director Paul Feig. “Everyone agrees with the cause and thinks, ‘We’re on that.’ But it’s about getting to that next level where you actually physically do it.”

Alberghetti also anticipates pushback. “I think people will be somewhat reticent to opening up their books because nobody wants to be painted in a negative light,” she says. “It’s important for us that this is not about finger-wagging and blame. It’s about, ‘We know you want this. Let us help give you the tools to do it and the information.’ ” And more information is coming — in the form of ReFrame research from Smith and her USC team, who will work with econometricians to measure more precisely the performance, domestically and abroad, of female-led content. “We see a lot of discussion about implicit bias, but there are all sorts of explicit bias about what sells that is articulated very publicly,” says Smith. “Our goal is to illuminate those practices and suggest there may in fact be another way that is just as profitable.”

Schulman touts the economic argument as one of ReFrame’s unique qualities, alongside its all-star peer-to-peer effort uniting stakeholders who long have waged the fight for gender parity as individuals. “I’ve been doing this a long time, Cathy’s been doing it a long time, Keri’s been doing it a long time, [Sundance’s] Michelle Satter, [The Black List’s] Franklin Leonard,” echoes Peirce. “All of these people at the top of their field have stuck around for two years, showing up to these meetings. Now we have a system that’s bringing them together.”

Mia Galuppo contributed to this story.