Continue to The Hollywood Reporter SKIP AD
You will be redirected back to your article in seconds
Skip to main content
May 3, 2019 6:45am

In 2004, Alec Baldwin got a phone call from John DeLorean. At the time, there were several movies in the works about DeLorean’s life story and the infamous automaker wanted Baldwin to portray him on the big screen.

“Whenever someone reaches out to you in that way and it’s not vetted, you do have some doubts in the back of your mind that this could be some guy playing a joke on me. But, it was John,” Baldwin recalls when speaking to The Hollywood Reporter.

The call lasted for 10 minutes and Baldwin — morphing into DeLorean’s recognizable Midwestern accent — quotes DeLorean as saying, “I was hoping I could get together with you and figure out a way that we could talk about this film they’re going to make about my life.” He was very “amused” by the fact that his story was going to get the movie treatment, says Baldwin.

The following year, however, DeLorean died. And none of those movies were ever made.

But now, 15 years later, Framing John DeLorean will finally be telling DeLorean’s story with Baldwin in the starring shoes — though the role is likely different than DeLorean could have imagined.

Framing John DeLorean made its world premiere at New York’s Tribeca Film Festival on April 30 (and hits select theaters June 7), where a fleet of DeLorean sports cars followed the cast and team from their packed Chelsea premiere to a party downtown where guests lined up to take pictures of the cars on display. While to many the DeLorean car is famously associated with the Back to the Future franchise, Framing John DeLorean — utilizing a hybrid documentary-narrative form — reframes the Hollywood symbol as one that represents a man’s legacy.

“Because the car is so iconic, when you say ‘DeLorean,’ people say, ‘Oh, the Back to the Future car.’ That’s always your reference point in if people don’t know a whole lot about him. But Jon’s story is crazy,” explains Don Argott when speaking to THR, along with co-director Sheena M. Joyce. Aside from the people who associate DeLorean’s famous name with Doc’s time machine for Marty McFly, many others will only remember the man for his cocaine trial, which is something the film aims to correct.

DeLorean was the father of the Pontiac GTO sports car and the youngest executive at General Motors when he essentially risked it all to follow his dream of creating his own car company, the DeLorean Motor Company (DMC), and manufacture the stainless-steel DeLorean car in Ireland. Framing John Delorean, with the use of real news and FBI footage combined with dramatic reenactments, traces the many missteps that led to the brilliant automaker ultimately being the center of the “trial of the century” for, according to investigators, financing a $24 million cocaine ring in an effort to save his failing auto company.

Ultimately, DeLorean was acquitted in 1984.

“People misremember that verdict,” Morena Baccarin — who plays DeLorean’s wife at the time, supermodel Cristina Ferrare, in the reenactments — tells THR. “He’s misremembered as the person who went down for the drugs and the drug bust.”

Joyce adds, “So many people have asked us — is he still in jail? John was found not guilty, but it still ruined him.”

Though their phone call, which Baldwin discusses in the film, was only for a short 10 minutes, the actor says he could tell that DeLorean was a man who wanted his side of the story told. “You could see that John would go to any lengths to correct his public perception. He wasn’t going to go out that way,” says Baldwin. Stepping back into DeLorean’s shoes, Baldwins adds: “Don’t say that I was a drug dealer who gamed the judicial system by claiming entrapment — which he did, and won — I want you to think of me as a pioneer, as an innovator. As a corporate maverick and a would-be titan, instead of me being a guy who got a suitcase full of blow and tried to mess with the Irish government, and being a huckster, and a liar and a crook.” 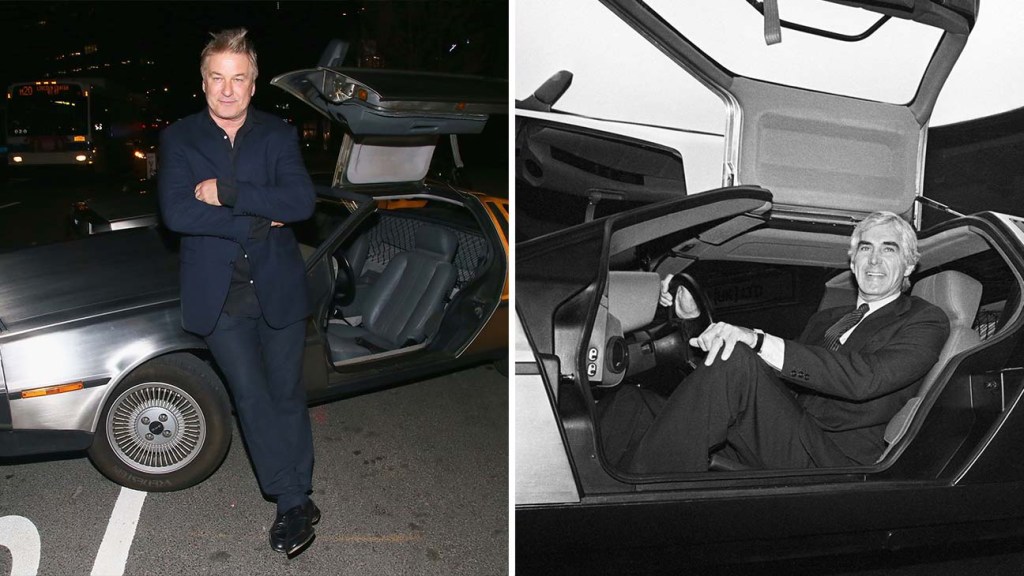 There’s a very intentional reason that Framing John DeLorean blurs the line between fact and fiction.

“We like to play with this idea of the frames through which we see people. What is truth? Can you rely on memory? Who is a ‘real’ person? Who knew the real John DeLorean? Is there one? Can you be hero and villain at the same time?” says Joyce of some of the questions their film puts to viewers when it hits theaters June 7 — which will be 10 years after the filmmaking duo were first approached about chronicling DeLorean.

The hybrid film, made with a limited budget, is part documentary and part narrative, with dramatic reenactments where a cast led by Baldwin and Baccarin act out the events that are discussed by talking heads who include DeLorean’s children, Zachary and Kathryn; DMC employees like DeLorean’s former partner Bill Collins; the many filmmakers who attempted to chronicle DeLorean’s life; Back to the Future screenwriter Bob Gale; and investigators involved in the FBI and DEA’s case.

The filmmakers also interviewed more of DeLorean’s family, like his brothers and nephew, who don’t appear onscreen. Similarly, though Ferrare does not appear, she spoke with Baccarin behind the scenes (“Her family was everything to her,” says the actress) and is a supporter of the film.

“There are several interviews with people that have never spoken in over 35 years about their role in any part of the DeLorean story and two of those were the people who were in the FBI and DEA undercover investigations,” Tamir Ardon, producer and DeLorean historian, tells THR.

Ardon, who befriended DeLorean in the later years of his life, says after seeing The Art of the Steal in 2009 — a film that also helped draw Baldwin into the project — he knew that Argott and Joyce were the ones to direct the DeLorean film he wanted to see. “We try to stay as accurate as possible,” he says. “We don’t hold back but we also don’t pull any unfair punches. When you’re dealing with a real person’s life, you have to be as objective as possible. Kathryn called me up crying and was absolutely in love with the film, so I had a huge amount of relief when I heard that. I felt like I was doing a good job of telling her dad’s story and allowing her and her brother Zach to be able to tell their aspect of the story as well, which I think for an audience really resonates.”

Baldwin is no stranger to portraying real-life characters, but what attracted him to DeLorean was how he was “this extremely capable guy and it’s his ego that was his hubris that prevented him from creating a company that should have lasted.”

He continues, “I never see the Trump thing as playing Trump. I see the Trump thing as being like when they would blow the horn at the racetrack. The SNL cold opening is the firing of a cannon, the firing of a pistol that begins an event. Am I giving you the finely etched characterization of Trump that I give you in a Steven Soderbergh movie? No. This is a loud, brassy, cacophonous, silly opening of a comedy show. The opportunity to do a real impersonation of Trump doesn’t really exist. With this, the weird thing is you are attempting to be DeLorean but one of the limitations [is time] and [SNL artists] Louie Zakarian Jodi Mancuso are very, very good at what they do and they’ve won many Emmys because they do it quickly. We didn’t have time for me to sit in the makeup chair for three to four hours. So we did the DeLorean that we could do in two hours, and Louie and Jodi are masters at doing great work and efficiently.”

Diving into a project such as DeLorean only furthers Baldwin’s desire to hang up his Trump on SNL. “The Trump thing is going to end very soon. I can’t do it any longer, I’m right there,” he says. “You know what it is. In the last year, everything in my life is governed by one thing, which is my wife and my children. I’m 61 years old and I have four kids, five and under. So that has a profound effect on my life. During the past year, I worked a little bit, things here and there, but nothing major. And I could afford on those Saturdays to do the show here and there. This season, I probably will have done eight of them. Now I’m going to go back to work a lot in the fall, and therefore the weekends will be much more precious to me with my wife and kids.”

He then adds, “Plus, there’s a lot of people out there who can play Trump.”

In the film, as Baldwin is being fitted with a wig and DeLorean’s prosthetic chin, the actor shares his own commentary on the man and the making of the film. “I found that very difficult,” Baldwin now says of breaking the fourth wall throughout the film. “I would always love to have another whack at this, to play DeLorean in a feature film, eventually. We’ve talked about trying to find a way to develop this into something else, maybe a miniseries. And there are other DeLorean projects in the works. We’ll see.”

One of those other DeLorean projects is from George Clooney, who is set to direct an untitled feature about John DeLorean and possibly play the automaker, though that hasn’t been decided.

“I hope they get it right,” says Argott of what he’d like to see from a feature film on DeLorean. “As experimental as we went with Framing John DeLorean, this was really a great way to tell a story about the guy. When you’re doing a script, you have to commit. The character can’t be seven different things, otherwise the movie is a mess. That’s the challenge of getting John right. What we learn — and Alec talks about this as he was getting deep into the character — is that John is not the archetypal guy. When something goes wrong, he doesn’t flip out. Everyone around him flips out. And that’s a great character trait, but not on film.”

Joyce adds, “He was very flat and even. It’s not dynamic to see on film.”

Argott continues, “That was the one thing that came across. There’s a film out called Driven [a comedy about DeLorean that premiered at the Venice Film Festival], which we haven’t seen yet, but I know it takes a lot of liberties and is told from the drug-dealer side. And I think that is partly because John becomes this very monotone character. So I think it’s going to be a challenge to pull off in an interesting way, but I’m excited to see it.”

Joyce then adds, “I mean, of course we wish everybody luck, but I really do feel like we got it right. And I’m glad we got here first.”