If Dark Knight Returns: The Golden Child was seen as a controversial comic ahead of its release, thanks to the mistaken belief that a promotional image for the Frank Miller-written one-shot was removed after it was accused of supporting anti-Chinese authority protestors in Hong Kong, then the actual comic itself is only likely to amplify that impression. Especially as President Donald Trump makes an appearance… kind of.

Eschewing Superman and Batman as audiences know them almost entirely (the former makes a cameo at the start of the story, the latter is mentioned repeatedly but doesn’t appear), Miller and artist Rafael Grampa’s The Golden Child instead focuses on the next generation of the characters — Lara and Jonathan Kent, the offspring of Superman and Wonder Woman, and Carrie Kelley, the new Batwoman — and their attempts to stop the supervillain team of Joker and Darkseid. However, for many, it’s what the Joker and Darkseid are doing that is likely to raise a few eyebrows.

The two are working, basically, to re-elect Donald Trump. The president isn’t directly named in the comic, but he doesn’t need to be; his likeness is used on multiple pages; dialogue from the president is heard at one point and is distinctly Trumpian (“It’s going to be beautiful! You’re gonna love it! You’re gonna love every inch of it! I’m talking streets so safe you can let your kids go play and not even think about ’em!”); and the Joker’s jacket, made of the U.S. flag, has the words “I Really Don’t Care, Do U?” scrawled on the back. Subtle, it’s not. 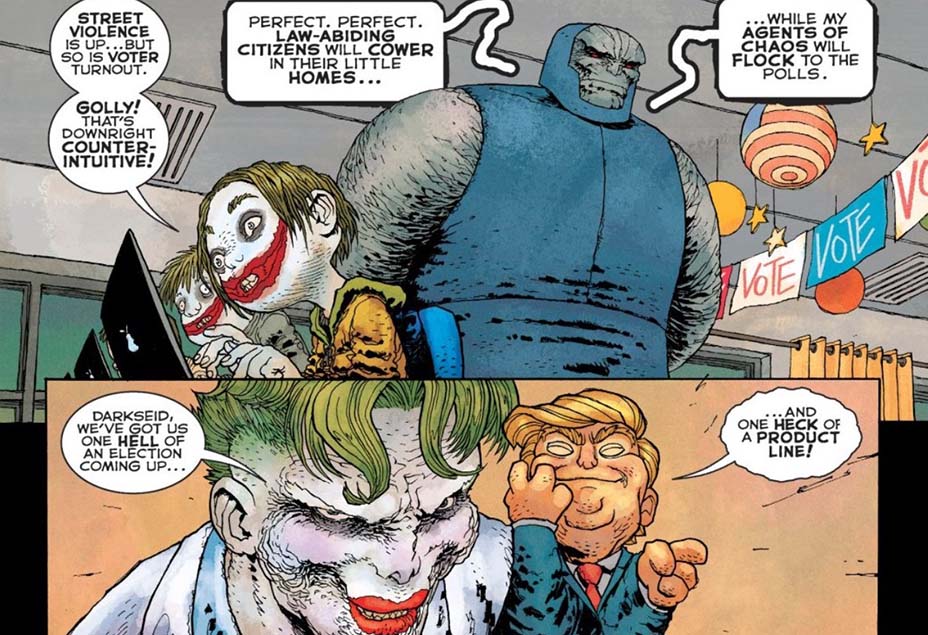 For those wondering why the two are working together for this purpose, Darkseid has recruited the Joker as an “agent of chaos” to promote Trump’s election, with the ultimate goal of destroying humanity’s faith in itself and thereby being easier to conquer. The usual, in other words.

While Trump goes officially unnamed, it’s clearly him, drawing a breathtaking differentiation between DC and primary competitors Marvel, which rejected an editorial by Maus creator Art Spiegelman and replaced captions in its special 80th anniversary release out of concern for being too political.

Marvel’s CEO is Trump friend and donor Ike Perlmutter. In fact, Marvel gained a further Trump connection when the East Coast division moved offices in New York this week, taking up residence in a building part-owned by the Trump Organization.

If 2020 proves to be as ideologically divided as it appears it will be, partisans will find it easy to choose a comic book publisher based on their beliefs headed into the next election. 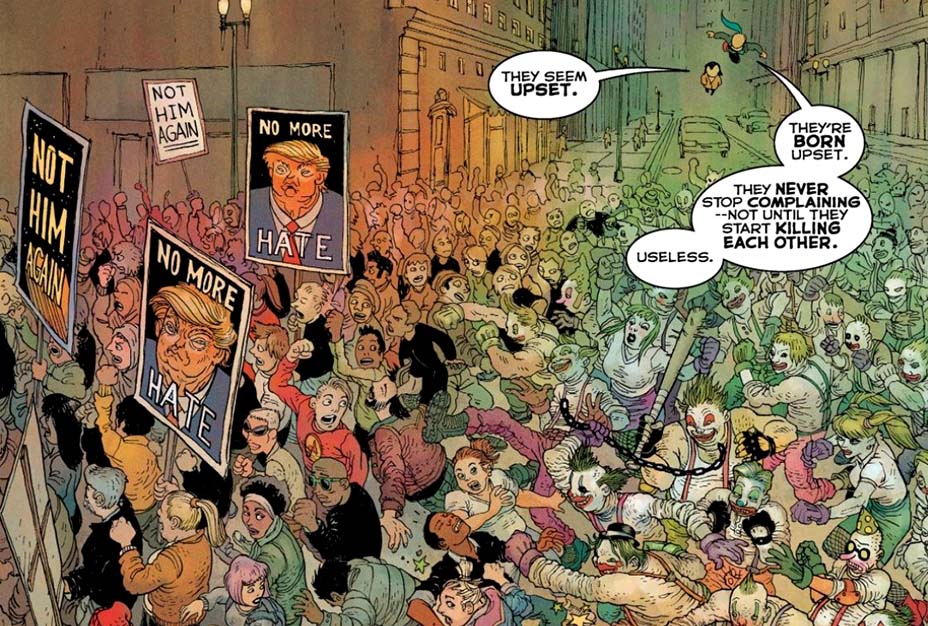