Not even yesterday’s torrential downpour could keep the throngs of visitors away from the inaugural edition of Frieze L.A., somewhat ironically situated in the “Blue Sky” tank of the Paramount Pictures lot. The global art fair, which launched in London in 2003 and expanded to New York in 2012, highlights artwork from more than 70 of the top galleries in the world (a third of them from L.A.), inside a — thankfully waterproof — 62,000-square-foot tent. Frieze L.A. is open to ticketed visitors through Sunday.

“What a great way to spend the morning,” Late Late Show host James Corden told THR, as he examined a piece by Gabriel Orozco called The Samurai Tree. “I’ll do anything to wander around looking at great art. I just want to see it all.”

In the first hour of the VIP preview, THR caught up with Ari Emanuel, CEO of Endeavor, which took a majority ownership of Frieze in 2016, as he snaked throughout the crowded booths in his sneakers with Frieze co-founder Amanda Sharp, shaking hands and accepting congratulations on the turnout.

When asked how it was going, Emanuel put his arm around Sharp. “We are pinching each other!” 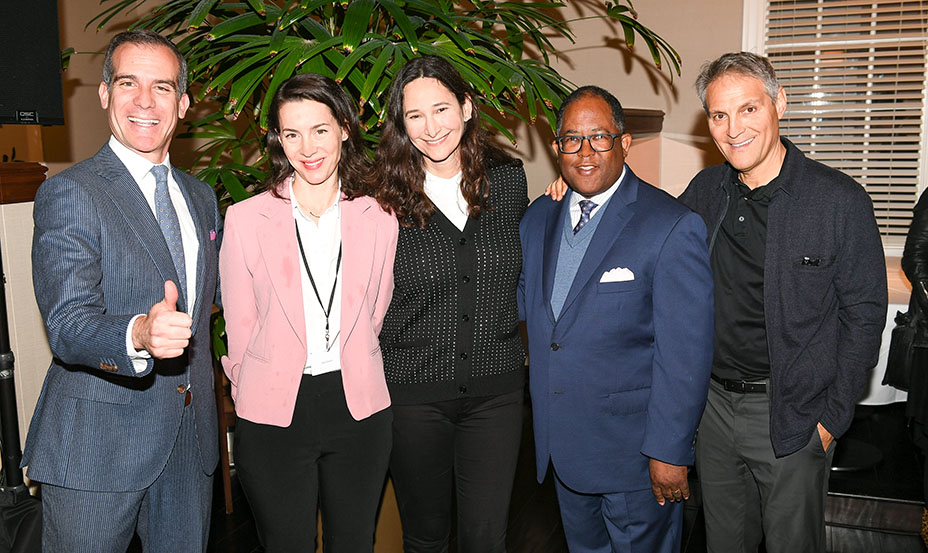 Emanuel and Sharp stopped to chat with gallerist and former MOCA director Jeffrey Deitch, whose booth was so crowded with collectors that one almost tripped on a giant zigzag floor sculpture by artist Judy Chicago. (Deitch’s whole exhibition of Chicago’s minimalist and abstract work — all made during her years in L.A. — is meant to preview her solo show set for next September at his Hollywood gallery.) 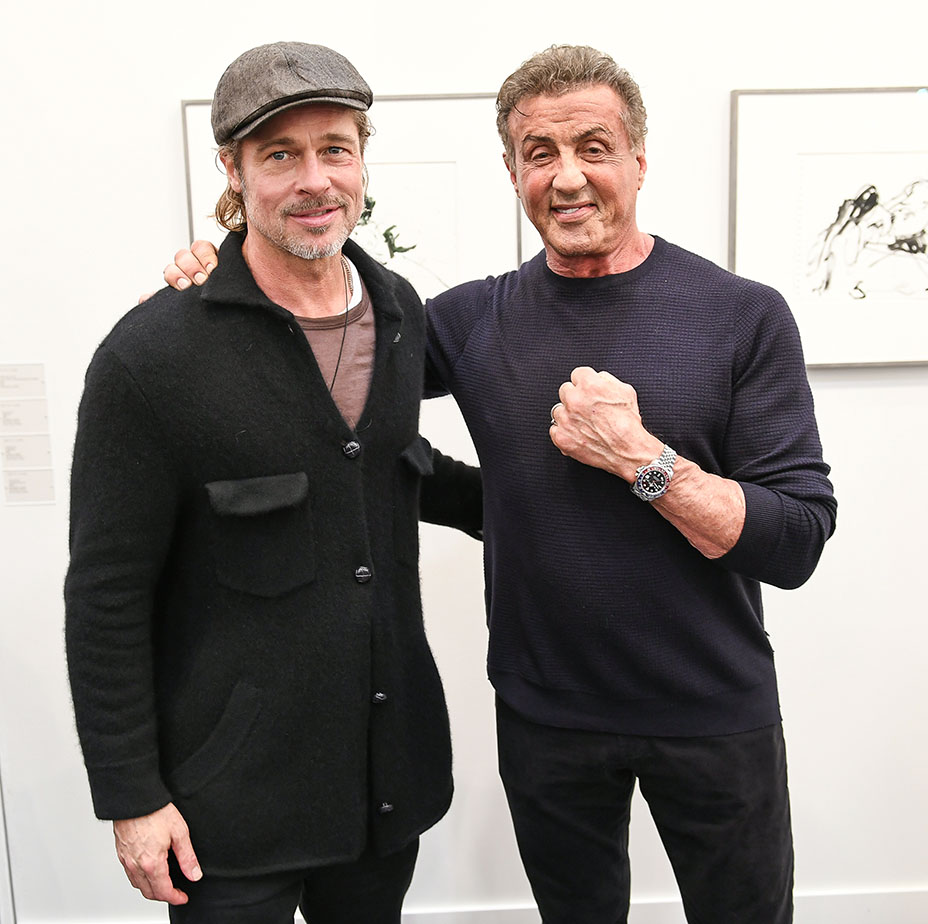 “It’s wonderful to see such diverse and exciting work under a tent which isn’t leaking,” said actor Julian Sands, who joked that he wouldn’t name which artworks he had his eye on: “If I told you, you might buy it first!” Sands is participating in Frieze not just as a collector but also as a rainmaker and interviewer: He’ll conduct a conversation at LACMA tonight at 6 p.m. with filmmaker Martha Fiennes (sister of Joseph and Ralph) for the U.S. premiere of Yugen, starring Salma Hayek. “[LACMA director] Michael Govan got wind of it through Julian, a dear mutual friend,” Fiennes said. The AI-generated moving image artwork premiered at the Venice Film Festival and was also shown at Hayek’s father-in-law Francois Pinault’s Palazzo Grassi. Fiennes sibling Magnus contributed music for the piece, which has no running time, as artificial intelligence generates its continuous run. (Feb. 15, the Bing Theater at LACMA, 11 a.m. to 8 p.m.)

For his part, Govan stood rapt at the booth of New York-based gallerist Marian Goodman — watching a you-had-to-be-there performance conceived by artist Tino Sehgal — alongside Juan Gaitan, director of Mexico City’s Tamayo Museum of Contemporary Art. Garcetti took in the performance as well and shared his thoughts on the fair with THR.

coming together” — the event will host 70 galleries from all over the world.”]

“I love the collision of Paramount and visual art,” said Garcetti, sharing his view on what Frieze’s arrival and the confluence of other fairs opening this week mean for the city. “We know the creativity that’s been here for decades, the visual artists that have been here,” he said. “But now we’re realizing what a cultural draw this can be as well. It’s a moment where we realize, we want to show off our city through art, not just show off our city and it happens to have art. … Something like Frieze solidifies this in many ways.”

Joanne Heyler, director of The Broad, concurred that Frieze L.A. has been a long time coming: “L.A. has had a long tradition of practicing artists and great art schools and institutions have been growing,” she said. “I think the only piece that has always been less clear is the density of commerce, the density of the art market. But I’m really encouraged and interested to see so many collectors [here] who look very happy. Hopefully, they’ve all made great purchases.” 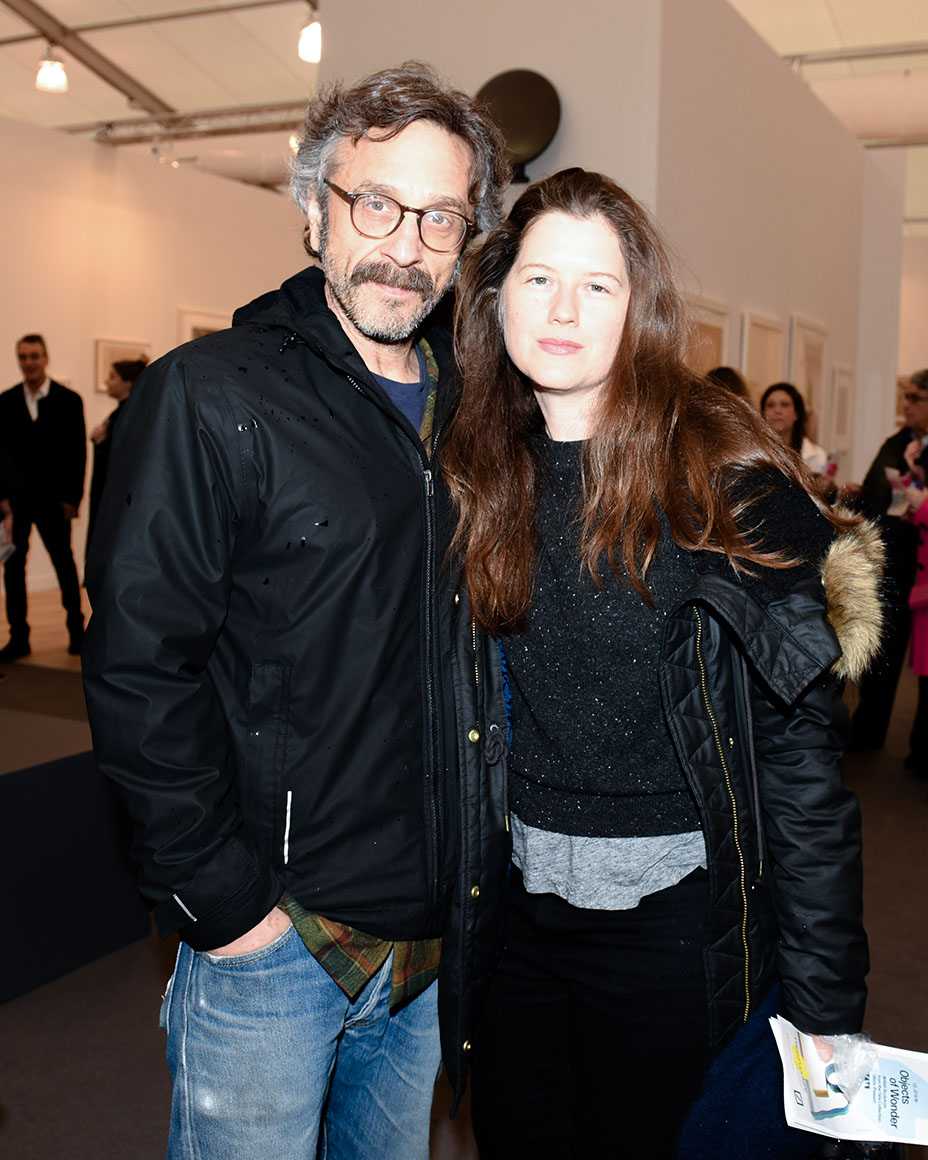 Among the day’s great purchases: The London-based global gallery Hauser & Wirth announced the sale of late L.A. artist Mike Kelley’s Unisex Love Nest (1999) to a private European foundation, for $1.8 million. Pace, based in New York, reported sales across a broad price range, spanning from several drawings by Loie Hollowell for $15,000 each to a 1967 painting by Alex Katz in the seven figures. Notable sales of works by pillars of Pace’s program include: a 2017 pin drawing by Tara Donovan for $225,000 and a 1967 work on paper by Alexander Calder for $200,000. New York-based gallery Levy Gorvy reported that Gunther Uecker’s Spirale III (2002) was sold with an asking price of $1.2 million, while Yayoi Kusama’s Infinity Nets (B-A-Y), 2001 was sold with an asking price of $1.6 million. New York-based Jack Shainman reported a sale of artist El Anatsui’s gold-colored Topos (2012) wall sculpture for $1,250,000. New York-based Lehmann Maupin sold a total of $1.37 million of works from its solo presentation of sculptures and paintings by the artist Shirazeh Houshiary. Sales included Lunate (2018) for $479,000, a large-scale sculpture in which the artist layers glass bricks in an organic yet strictly ordered shape reminiscent of a helix or vortex. A number of paintings also sold in the range of $160,000 to $399,000. 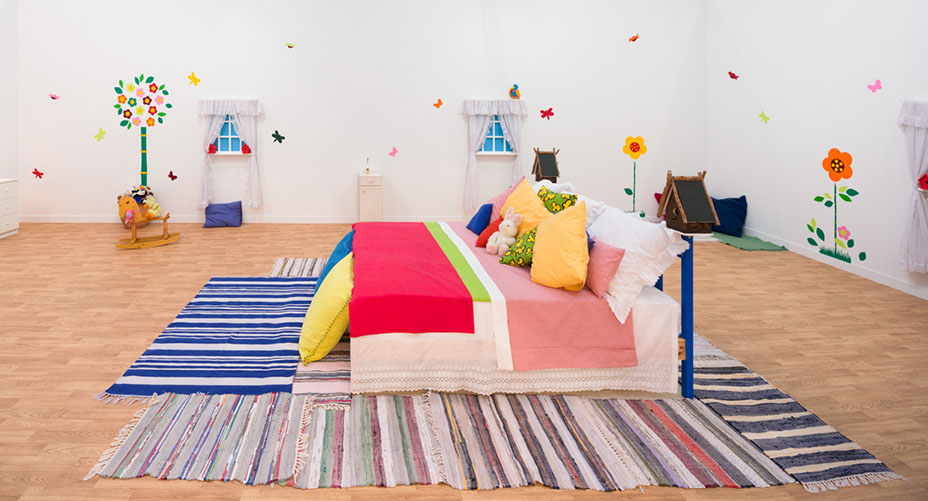 Among L.A.’s own: David Kordansky Gallery sold nearly all 11 of Kathryn Andrews’ wall-based works, all entitled Hollywood Dahlia (2019), for $40,000 each. L.A. Louver sold many works from its solo presentation of Gajin Fujita, including paintings at $40,000, $45,000 and $250,000. Blum & Poe placed most works in its group presentation of works  by Theodora Allen, Julian Hoeber, Mimi Lauter, Shio Kusaka, Mark Grotjahn and others, with one painting by Grotjahn selling for $600,000. Park View/Paul Soto sold out of Mark A. Rodriguez’s Grateful Dead-tribute artworks in the form of libraries of cassette tapes): One library went to collector Beth Rudin DeWoody and another to a prominent collecting family involved with several L.A. museum boards. Anat Ebgi sold out of its group presentation of Faith Wilding, Jordan Nassar, Alec Egan, Caroline Walker, Janet Werner, with works priced at $11,000 to $35,000.

Frieze-related celebrations have been taking place all over the city this week. Highlights included a Valentine’s night blowout at Chateau Marmont hosted by hotelier Andre Balazs and gallerist Jay Jopling (of the London- and Hong Kong-based Frieze exhibitor White Cube) that was billed to go as late as “until lovers should retire.”

On the cozier side, interior designer Kathryn Ireland (Bravo’s Million Dollar Decorator) and her niece Tarka Russell, of the London-based gallery Timothy Taylor, co-hosted an intimate dinner at the Mandeville canyon home of socialite, artist and equestrian Baby de Selliers in honor of Julian Zugazagoitia, director of Kansas City’s ?Nelson-Atkins Museum. Martha Fiennes and longtime board members of several local museums were among the guests. 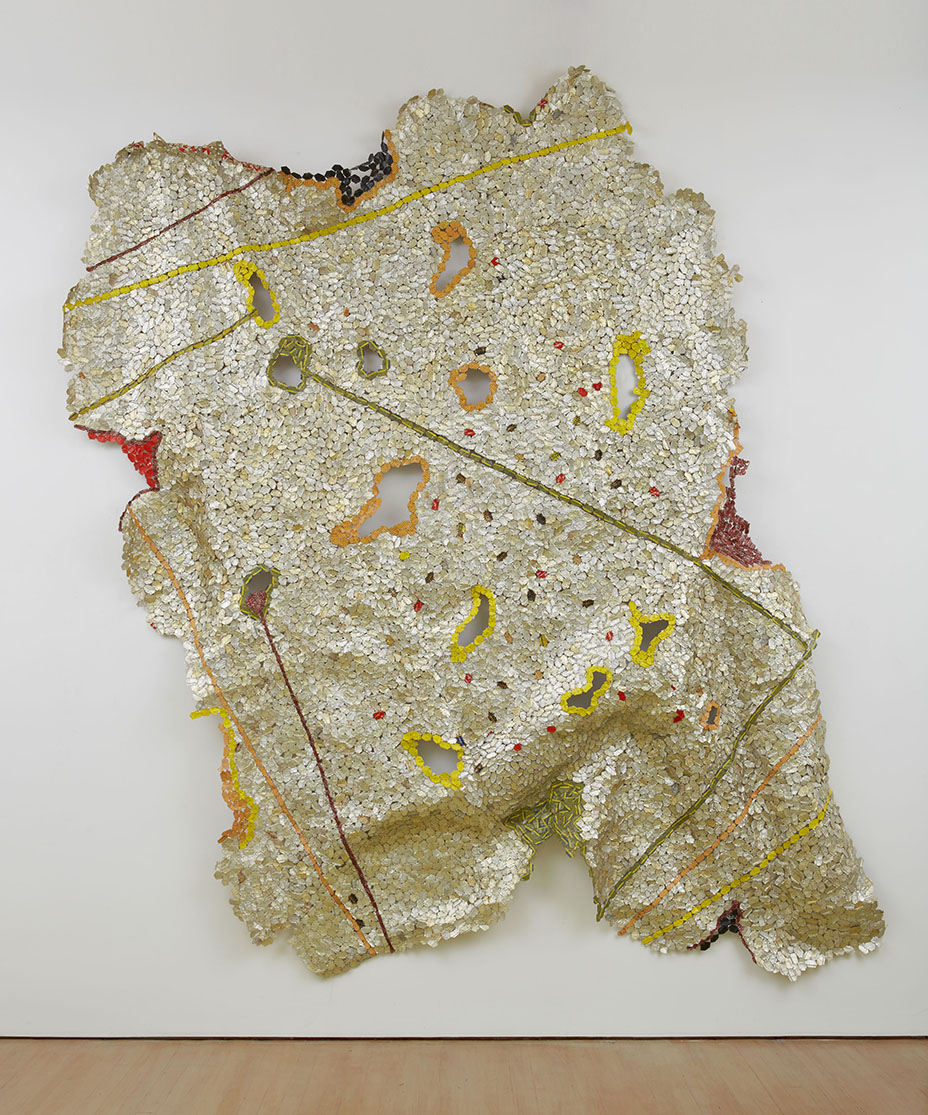 A big thumbs-up on Frieze came from Brad Pitt, who arrived at the fair’s 10:00 a.m. VIP breakfast and spend an unhurried day perusing special site-specific art projects on Paramount’s New York backlot (including a giant inflatable bottle of ketchup from McCarthy and works by Barbara Kruger, Underground Museum co-founder Karon Davis and Sarah Cain) as well as the gallery exhibitions. “I’m just happy we’ve got this in L.A. now,” Brad Pitt told THR as he entered the Gagosian booth. “I hope we can keep it here.” 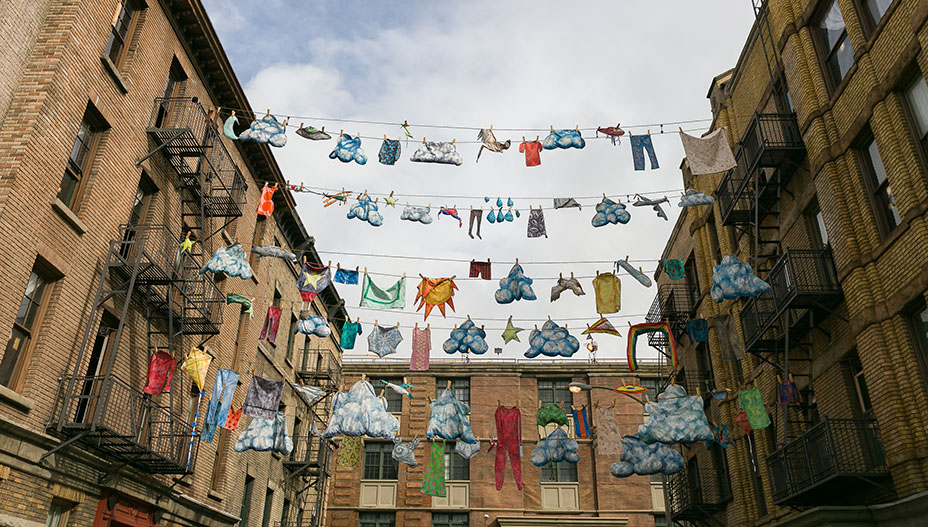 The Best Early 4th of July Sales on Mattresses, Appliances and Furniture