Editor’s note: Due to a dispute with Scott Rudin, lead producer on The Front Page, The Hollywood Reporter‘s chief theater critic was prevented from attending a preview performance with a purchased ticket, and disinvited to opening night, so this review is appearing later than those of other outlets.

Playing Walter Burns, the pugnacious bulldog managing editor of Chicago’s Herald-Examiner, Nathan Lane doesn’t enter until an hour and 45 minutes into The Front Page. But in a performance that’s a master class in the art of the ferocious farceur, Lane causes the energy level to skyrocket and stay aloft throughout the remainder of this sturdy chestnut by one-time newspapermen Ben Hecht and Charles MacArthur, which remains the definitive American play about ink-stained tabloid wretches. Even if not every element in director Jack O’Brien’s lavishly cast production hits the mark, this deluxe Broadway revival nonetheless is crackling entertainment.

Originally staged on Broadway by George S. Kaufman in 1928, the play thumbed its nose at polite refinement, with its rough-edged, ethically elastic characters, coarse language, gritty situations and hard-bitten view of political corruption and law-enforcement ineptitude. It’s been revived four times since, most recently with John Lithgow and Richard Thomas in 1986, and has been adapted multiple times for film and television. Big-screen versions include an early talkie in 1931, with Adolphe Menjou and Pat O’Brien; a 1974 Billy Wilder remake with Jack Lemmon and Walter Matthau; and the most enduring of them, Howard Hawks’ 1940 screwball gem, His Girl Friday, which flipped the gender of star reporter Hildy Johnson, casting Rosalind Russell opposite Cary Grant as Walter Burns and turning their codependent relationship into a rocky romance.

With its unhurried three-act construction and long wait for the main sparring partners to share scenes, the play can now seem a touch wheezy to contemporary audiences. But it’s a marvel of theatrical craftsmanship, and in the challenging first act in particular, where ostensibly not a lot happens, Hecht and MacArthur fold exposition, character detail and lovingly drawn milieu description into rapid-fire talk with matchless flair.

O’Brien is an old pro at wrangling large ensembles, winning Tony Awards for his superb productions of The Coast of Utopia and Henry IV, populous pageants that make this play’s 25-member cast seem almost compact. But here he favors the breathless comedy style of 2014’s It’s Only a Play, another starry production dominated by a virtuoso turn from Lane; O’Brien sets up and lands punch lines with machine-tooled precision rather than coaxing the humor organically from the situations. That also has the effect of softening the play’s delicious cynicism and undercutting its melodrama.

Part of the latter weakness is a miscast John Slattery as Hildy, who has stopped by the Press Room in Chicago’s Criminal Courts Building to say farewell to his fellow muckrakers as they cover the imminent execution of Earl Williams (John Magaro), an anarchist convicted of killing a policeman. Hildy is leaving the business to marry and move to New York. Slattery rewrote the book on rascally charm during his years as Roger Sterling on Mad Men, so he plays Hildy’s Brylcreem-slick suavity with pleasurable ease. (He gets a big laugh when Hildy announces his intention to embark on a fresh career in advertising.) But the raw hunger of a competitive man addicted to the thrill of the scoop and the adrenaline rush of the deadline is missing. That dulls the knife-edge of his hesitation as he wavers between following Walter’s orders to stay on the story as events in the Williams case take unexpected turns, or boarding the Eastbound train with his anxious fiancée Peggy (Halley Feiffer) and her battleax mother Mrs. Grant (Holland Taylor).

No matter. In terms of comedy, the production delivers big time, even if some of the impressive assembly of New York stage veterans are under-employed. O’Brien begins and ends each act with a flash-bulb freeze-frame on Douglas W. Schmidt’s magnificent set, its wallpaper and ceiling stained by untold thousands of cigarettes. Reporters from various city tabloids kill time sitting around playing poker and cracking wise as they await updates on Williams, regularly reaching for one of the office’s many candlestick telephones like a holstered weapon. The gallows humor is quite literally underscored by the occasional sound of the execution team downstairs, testing the hangman’s apparatus with sandbags. 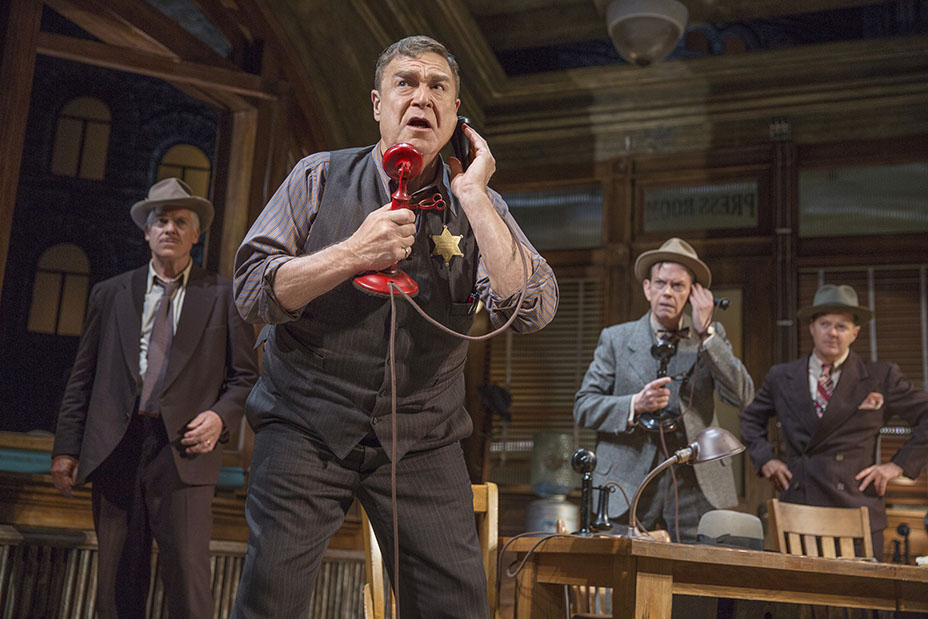 The saltiest deep-dish work in the supporting cast comes from Lewis J. Stadlen and Dylan Baker, the former a crusty hack whose barbs are equal-opportunity offenders (the script’s more inflammatory epithets have been softened for 21st century sensibilities, though plenty of racist, misogynistic and homophobic digs remain), the latter a self-satisfied weasel with a smarmy manner. And the invaluable Jefferson Mays makes prissy, germaphobic fussbudget Bensinger a hoot, particularly in a hilarious bout of physical comedy with Slattery, during which Hildy so horrifies him with contamination that he struggles to back out through the door with an open umbrella.

Beyond the press ranks, Micah Stock’s psychiatry-theorizing German cop is shtick laid on too thick, and John Goodman is disappointingly cartoonish as a dimwit Southern sheriff. But Dann Florek is the oily essence of opportunistic authority as the Mayor. Along with the sheriff, he’s up for re-election and determined to use the Williams case to his advantage, playing up the Red Menace angle and courting the all-important black vote. (The deceased cop was African-American.) That plan gets complicated when Williams escapes, thanks to the sheriff’s stupidity, and Hildy hides him in Bensinger’s rolltop desk until he can sew up the exclusive. An additional hitch arises with the arrival of a clueless messenger (another Mad Men alumnus, Robert Morse, in a delightful two-scene cameo), delivering a reprieve from the Governor.

There’s no shortage of tasty moments, among them Taylor’s entrance as Mrs. Grant, like a guns-blazing warship, appropriately crowned with a velvet admiral’s hat (Ann Roth did the natty costumes); and Sherie Rene Scott finds touching notes in a bleeding-heart tart protesting Earl’s fate. But the play only really starts firing on all cylinders once Lane enters, as Walter mows down any opposition standing between him and his goal with quick-thinking chicanery, a belittling put-down or a succinct “Shuddup!”

Perhaps nervous about the fact that his star headliner is absent for more than half the proceedings, O’Brien mishandles the many advance previews of Walter’s ruthless manner. The setting is 1928, pre-speakerphones, and while we hear only one side of every other telephone conversation in the play, whenever Walter calls, his voice booms out via the theater’s audio, whether barking or cajoling. That lessens the impact of his eventual whirlwind arrival, but Lane is such a hurricane comedic force that he soon compensates.

Walter is an operator who prides himself on his unscrupulousness, his lack of personal loyalty and his unparalleled manipulative skills, all focused on landing the Williams story and keeping the wandering Hildy in his employ. Bellowing with volcanic fury one moment and gasping with exasperation or reeling with exhaustion the next, Lane elevates everyone around him, including Slattery.

The relish with which he blasphemes up a storm while cooking up the idea of a prayer for the sinful city of Chicago, to be splashed across his front page, is priceless. And the sight of him singlehandedly attempting to move Bensinger’s desk, with its human cargo, reduced many in the audience to tears of laughter. Right up to his delivery of one of the all-time great closing lines in American drama, the galvanizing force of Lane’s performance erases any concerns about the production’s unevenness. The same goes for the grubby valentine of Hecht and MacArthur to a profession peopled by shameless reprobates, dinosaurs from the lost age of tabloid newspaper journalism.