No one can touch Disney when it comes to repackaging popular films as family-friendly Broadway musicals. The Lion King set a high bar with stage pictures so breathtakingly inventive they propelled it to become the most lucrative theatrical property of all time. Other shows from the production stable also freshened the material in ingenious ways. Mary Poppins honored the movie’s quaint early-1960s conception while employing advanced stagecraft and captivating design to amp up the sense of wonder. Aladdin injected invigorating razzle-dazzle spectacle and insouciant humor while leaving us puzzling over the mechanics of that magic-carpet ride. Even the modestly budgeted Newsies streamlined a lumbering screen property to draw out the story’s rousing spirit via the vigorous athleticism of its staging.

Watching Frozen, the first mental readjustment you have to make is that despite its on-trend female-empowerment thrust and its marriage of traditional stage techniques with technological innovation, this is fundamentally an old-fashioned fairy tale for tykes and tweens. In fact, it has more in common with Disney’s pathfinding stage success, Beauty and the Beast, than with the more boldly reimagined shows that followed. For the legions of kids who made the 2013 movie the highest-grossing animated feature of all time, that won’t likely impede their enjoyment, especially given the thoroughly winning incarnations of sister protagonists Elsa and Anna by the talented Caissie Levy and Patti Murin, respectively.

For anyone expecting more than a straight-up rehash of the movie on stage, however, this pricey production will seem low on inspiration. Disney Theatrical has had its misfires, most notably The Little Mermaid, a boring, baffling mess that smothered the ample charms of its source material in design choices so hideous they made your eyes bleed. Thankfully, this is not that show. Under the direction of Michael Grandage, Frozen doesn’t entirely go wrong, but it does evince signs of the struggle to establish a consistent, unifying tone and to settle on a center in a story inherently bifurcated by having two heroines kept apart for most of the action. It ends up being merely adequate, a bland facsimile when it should have been something memorable in its own right.

Perhaps I was underwhelmed by the show in part because I was already ambivalent about the movie. Among Disney screen properties from the past decade or so, I was far more transported by the retrofitting of classically molded stories with spry wit and plucky feminist attitude in movies like Tangled, Enchanted and Moana. 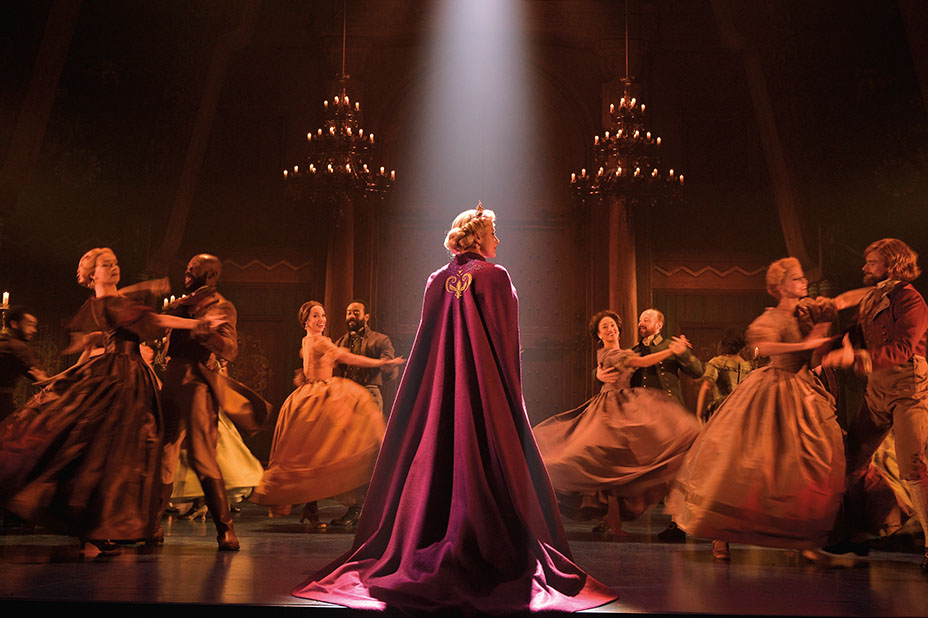 But there are millions who love Frozen, as evidenced by the girls sporting ice-blue princess gowns and tiaras at a recent performance. Or the 37-year-old Boston man captured on video last week pushing a police van out of the snow in full Elsa drag. The movie’s themes of unbreakable sisterhood bonds and female independence clearly struck chords that will continue to resonate as Levy scales the stirring heights of “Let It Go,” making that industrial-strength power anthem her own.

The musical’s book is by Jennifer Lee, who wrote and co-directed the movie and sticks largely to that template with minor expansions and modifications. And songwriting team Kristen Anderson-Lopez and Robert Lopez have written a dozen new tunes to augment the existing handful, starting with a pro forma opening number, “Let the Sun Shine On,” in which the happy, maypole-dancing folk of Arendelle celebrate the summer. But the foreshadowing of an enveloping winter begins when the two princesses are introduced as children. Ebullient tomboy Anna urges big sister Elsa to use her cryokinetic powers to create snow in their palace bedroom. But Elsa is unable to control her magic, resulting in a near-fatal accident that prompts the King and Queen (James Brown III, Ann Sanders) to separate their daughters and close off the palace to outsiders.

In classic Disney fashion, the girls are swiftly orphaned, a tragedy conveyed with stunning visual economy by Grandage and choreographer Rob Ashford, providing one of the show’s more emotional moments with scarcely a word. But once Elsa’s powers are exposed during her coronation festivities, causing her to flee to remote, icebound solitude, the imbalance in this retelling becomes more pronounced. Though it’s no fault of Murin, who is an appealing spark plug as Anna, her open-hearted determination is just never as compelling as the brooding Elsa’s torment.

That unequal dynamic is reinforced by the new songs, the best of which — “Dangerous to Dream” and “Monster” — explore Elsa’s conflict with the heartfelt feeling she’s forced herself to suppress. Levy’s voice combines a light, pretty airiness with a gravitas that pulls you into Elsa’s emotional isolation as she shuts herself off from the world and fully embraces her powers, only to learn to her horror that her magic has inadvertently cast Arendelle into eternal cold and darkness. Anna’s songs, by contrast, take their cue from the movie’s “Love Is an Open Door” — perky, poppy and lacking in distinctive personality. The one sober exception is “True Love,” in which Anna comes to grips with her misguided understanding of that feeling. 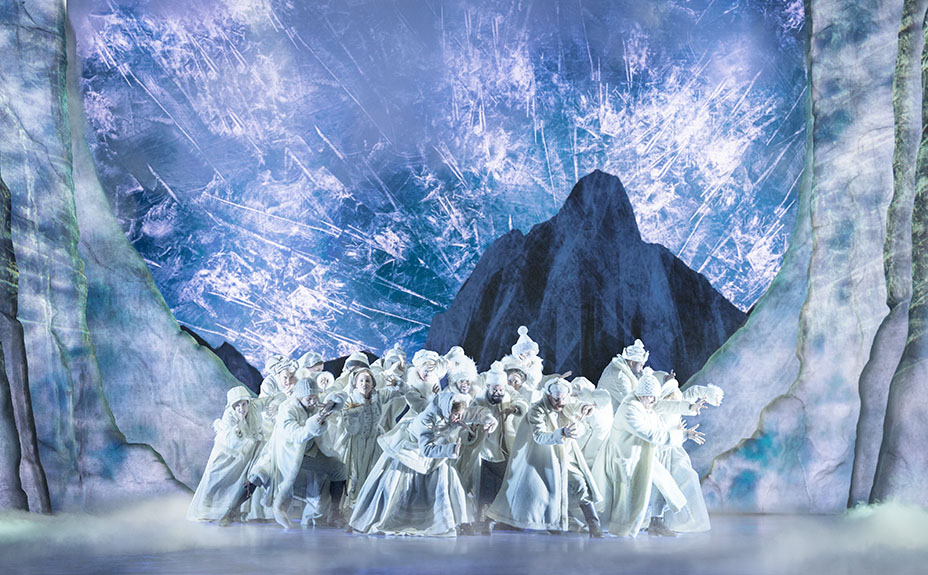 Anna has no shortage of story assets — a princely suitor with a secret agenda, Hans of the Southern Isles (John Riddle); an intrepid ice vendor, Kristoff (Jelani Alladin), and his reindeer sidekick, Sven (Andrew Pirozzi), who guide her on the treacherous journey north to find her sister; and a bouncy snowman, Olaf (Greg Hildreth), summoned from the girls’ childhood by Elsa’s magic.

The perilous scene from the movie in which Anna and Kristoff are pursued by a pack of wolves has been replaced here with the two of them inching their way across an icy rope bridge, while singing the flirtatiously antagonistic “What Do You Know About Love?” It mutes the excitement, but it’s a cute number, serving to plant the seeds of a romance that catches Anna by surprise. And it doesn’t hurt that Alladin is such an effortlessly charismatic performer; he beefs up a refreshingly diverse cast for what could have been another fairy tale in the all-white European tradition.

Puppet designer Michael Curry’s elaborate costume for Sven, a wondrously expressive scene-stealer, straddles the divide between cartoon and real worlds more effectively than anything else in the show. (I just hope Disney is covering Pirozzi’s chiropractor bills.) And while there’s some visual discord between that semi-naturalism and the more conventional, string-operated puppetry of diminutive Olaf, Hildreth’s daffy humor helps sell the illusion.

Through all of this, however, a nagging sensation persists that the material is not a comfortable fit for Grandage, nor for his longtime design partner Christopher Oram. There’s a clunky quality to the shifts between Elsa’s fortress of solitude and Anna’s journey to find her, which feels more often like an adventurous caper than a life-or-death mission. It’s a yellow brick road with little sense of real danger. Nor is the conflict strengthened by lame characters like the Duke of Weselton (Robert Creighton). That mustache-twirling villain keeps dropping dismissive comments about the limitations of women that reek of pandering script tweaks for the Time’s Up era. 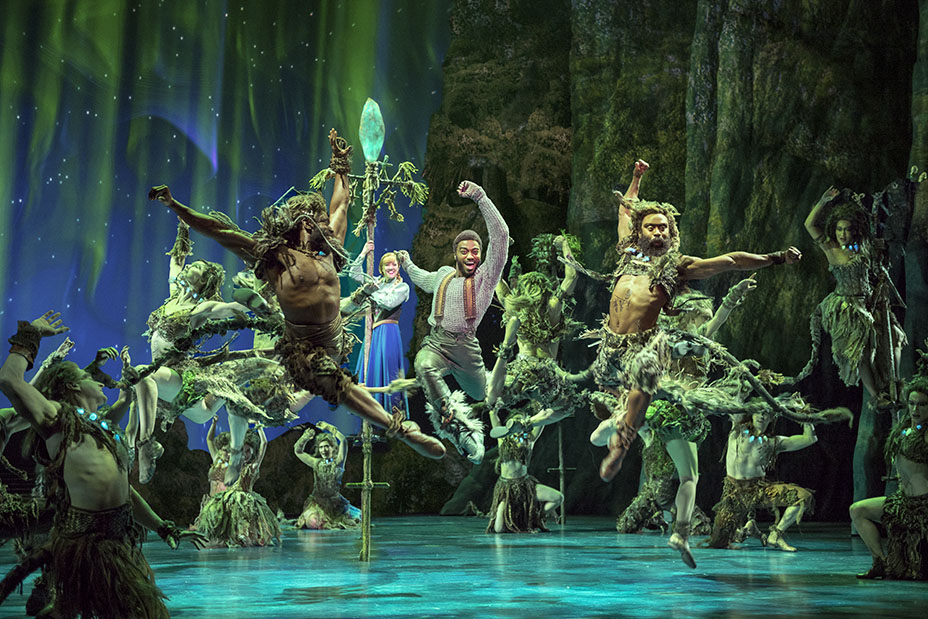 Rather than serving to vary the tone and leaven the gloom, the comedy interludes too often just feel strained, as in the second-act opener, “Hygge,” led by Oaken (Kevin Del Aguila), proprietor of a general store and sauna on the mountain route. This silly, mock-Scandi ditty builds to an incongruous “nude” kickline as the chorus files out of the sauna wielding strategic birch branch body coverage. It stops the story dead in its tracks.

One significant departure from the film is that the troll colony called upon by the King and Queen to neutralize Elsa’s magic has been replaced by the “Hidden Folk of the Mountains.” These centaur-like elven beings drawn from Icelandic folklore are led by the stupendously buff Pabbie (Timothy Hughes), in dreadlocks, bare torso and furry hind legs with a long erect tail. He looks like an escapee from Cats, with a kickass personal trainer and a fastidious manscaping regime. When the Hidden Folk return midway through Act II to talk up Kristoff’s husband potential in the rambunctious song-and-dance number “Fixer Upper,” the more urgent drama of the divided sisters again is put on hold. This is particularly unfortunate given the mortal threat to Anna after Elsa has struck ice into her heart.

The core audience for this show no doubt knows the story back to front from repeat movie viewings, so perhaps those moments of tonal whiplash won’t matter. But it seems a shame that material with such a physically arresting setting can’t muster more visual punch. While Oram’s work in the palace has a lovely traditional storybook quality, enhanced by Natasha Katz’s cathedral-like lighting, the over-reliance on video projections for the freezing effects seems borderline pedestrian, and some of the jagged ice panels look almost cheap. As for the beaded crystal curtains of Elsa’s retreat, they’d be right at home in a Celine Dion Vegas act.

The one unqualified knockout moment, which elicits squeals from the audience, comes as Levy negotiates the killer key change in “Let It Go,” and a mini-blizzard in an instant transforms her regulation regal outfit into Elsa’s iconic blue bejeweled gown. (The look also comes in pants later on as a seasonal extra.) Maybe for the Frozen faithful, that will be enough to send them home happy, following a detour to the extensive merchandise stand. Besides, who could begrudge the pleasure of an audience being showered with great bucket loads of paper snow during the finale?