Who owns the future? This is the question at the heart of every stock market. In the competition for delivery of the goods and services that make up the vast majority of the American economy, platforms like Google and Amazon are currently at war with brands like Mercedes-Benz, Nike and even HBO and FX over the answer to this question. In some forms of retail, the writing is on the wall and the platforms have already won. In other segments, such as luxury cars and designer clothes, the future still seems to favor brands. Apple sits on both sides of this conflict as the world’s dominant luxury personal computer brand and a leading internet platform. Maybe that’s why it is the most valuable corporation on earth.

Perhaps storytellers don’t need to care as much about the future as executives and investors do. After all, isn’t it possible that technology will enable storytellers to connect directly to their audience without the need for anyone to share the programming decisions or the profit in between? Don’t bet on it. As long as goods and services have existed, a substantial share of the authority and profit generated from getting those goods into the hands of the end user has gone to businesses, agents and governments who sit in the middle. Which is why the internet wants us to believe it is just a benign, frictionless ramp between consumers and producers. Pay no attention to the unprecedented concentration of profits and power in Silicon Valley — that’s just a generous tip we consumers have all donated as a thanks to technology companies altruistically creating a consumer and information utopia.

A hundred years ago, most people in America bought what they needed from small, family-owned businesses — say, a corner butcher shop, a local bakery and a small general store. There were a few recognizable brands, but shoppers didn’t especially need brands to guide their purchases when there were a limited number of choices and you could squeeze today’s fresh melon or place next Sunday’s new felt hat right on your own head in a neighborhood store. Retailers, however, wanted to compete by giving consumers more choices and lower prices. So along came grocery stores, then supermarkets, then Walmart. Sears became one of the largest companies in America by bringing the “department store” to the masses. Thus, we had a proliferation of both location-based brands (like Sears and Kroger) and the regional or national sub-brands inside these stores to help guide consumers through a bewildering array of choices.

Location-based brands were also a thing in television. A broadcast network was a national location-based brand (“Channel 2”) distributed through a series of local affiliate stations. And consumers were once thrilled to have three of these networks, plus even PBS for us nerds!

As abundance and choice grew, brands became the largest single engine of profit in the U.S. economy. Create a great product that people love, and you could sell it beyond your town, city or even state. Once consumers knew how good it was, they would look for that brand everywhere they went and buy it for the rest of their lives. That legacy is still with us. Most retail commerce still happens in physical stores, and the largest segment of television usage — by a large margin — still remains within linear channels.

Of course, over time, the notion of brand as a solemn commitment to quality began to fray around the edges (profit and quality can be tough bedfellows). Too often “brand” became synonymous with a great package rather than a great product inside. On TV, three networks became four, then five, then six, then hundreds of cable channels cropped up, both basic and premium. And if you ran a channel, you could program the cheapest programming that generated the biggest ratings. Then you could add even more commercials. It was a simple equation, and it is just so hard for short-term thinkers to resist killing the golden goose. 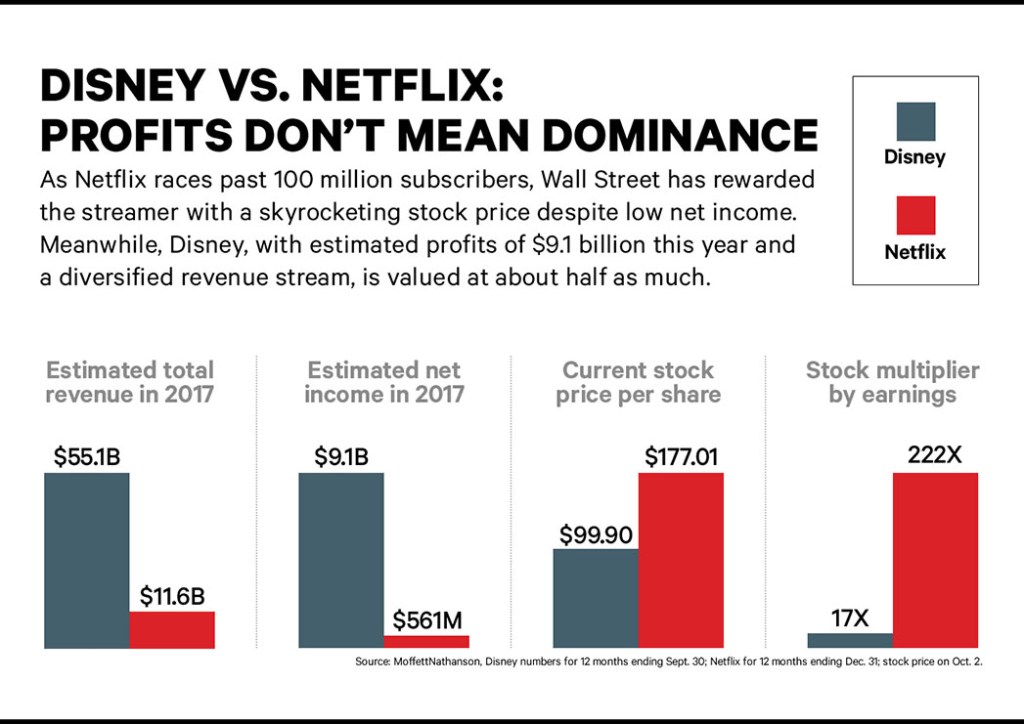 Of course, not every brand did this. Many of the brands that continued as beacons of extraordinary quality still are going strong. Steve Jobs insisted that the products made and marketed under the Apple brand be “insanely great,” and Apple is now the most valuable brand on earth. Jobs’ mission statement was, in principle, no different than NBC legend Grant Tinker’s — “First be best, then be first.” Television, remarkably, got a lot better as competition grew fiercer. That continues today, and the best thing to come of the “Peak TV” era is the increase in diverse voices who finally have the chance to have their stories heard.

But, alas, even when you do own the future, the future doesn’t stay owned. Now there is a group of giant companies in Silicon Valley that have a very different idea about how to guide viewers to television programs as well as everything else — and who will make a handsome profit in the process. In the internet’s vision of the future, most brands become irrelevant. What consumers (or viewers) will need to steer them toward nirvana are the seamless utility and recommendations of a platform. For many types of products, this prediction may be true. And so, very quickly, platform-based internet companies have become the most profitable and powerful enterprises. The biggest ones are now more valuable than the largest banks and oil companies. If you ask me, Google could give the Catholic Church at its height of power a run for its money … and without the inconvenience of those 10 pesky commandments.

And so, just as many stores and brands have become irrelevant, so will many channels. When we had to watch a show at a scheduled time or miss it entirely, you bet we knew exactly which channel it was on and when. Now viewers, who often don’t have to go to a physical store, also don’t have to access a channel to get TV programming, so they don’t have to care when the program is scheduled to air.

Currently, Wall Street is placing bets that platforms will own the future of everything, including TV. This is reflected in the radically disparate valuations (relative to profits) of traditional media companies versus internet media companies. Disney stock trades at 17 times earnings. Netflix stock trades at 222. Projected 2017 net revenue for Disney is $9.1 billion, and it’s $561 million for Netflix. I suspect that Wall Street is partially right about the bright future value of platforms, although with a huge dose of irrational exuberance. I do think platforms are very useful tools. I’m an Amazon Prime member. I subscribe to Netflix and Hulu, and they have great user interfaces and some excellent original programs. But what truly distinguishes all three of these services is the utility of their vast libraries of acquired content, which also is a part of what makes each a platform, even if it has a “house brand,” too. But this giant scale also can make it hard to find one great story to watch amid the tens of thousands available. Still, I don’t think anyone can argue that these new platforms haven’t used their unrestrained access to capital to innovate brilliantly around technology and the consumer media model to create value for viewers.

On the other hand, I think Wall Street is wrong about the bets it is not placing on the future of the strongest TV brands. People still go to HBO, Showtime, AMC, Starz, BET, Nat Geo and numerous cable networks for a great new original series, as well as Netflix or Hulu. And most U.S. TV viewers still seem eager to go to ABC, CBS, The CW, Fox, NBC and PBS. The legacy of these brands will be hard to completely erase, and in many ways, as the streaming ecosystem develops, they actually will get better. I’m absolutely thrilled FX can begin to use a subscription streaming model that will allow our brand to be more fully expressed than it could ever be through a channel. This ideal — that a TV brand should be a complete box set of every great current and past series it has ever programmed — was pioneered by HBO.

And as much as I’d bet the big streaming television platforms are here to stay, I’m dubious that their various recommendation engines can fully supplant the need for brands. For one thing, I am getting tired of the way internet platforms think they know me, either personally or as a member of the fake news and clickbait-addicted masses. And as skeptical as I am that an algorithm will ever figure out what few shows my wife and I will enjoy watching together, I’m almost certain that it will never figure out what I don’t know I might love tomorrow. To answer a question like that, you have to truly put the artist first. Not the data. Not the money. Not the plan for world domination. The artist.

I’ll bet, given the excruciating paradox of choice viewers now are facing, that the really good legacy brands based on channels will continue to have value and meaning to consumers. Streaming platforms will too, unless they get so bogged down with the pursuit of shock-and-awe levels of volume that they can’t maintain a consistent quality.

So who owns the future of television, brands or platforms? Well, if you think viewers want their television “good enough,” bet it all on platforms with their cheap pricing, vast libraries and data-driven algorithms. On the other hand, if you think many viewers want their television “insanely great,” cast a vote for brands to still make a meaningful contribution, even as platforms add their share. I personally think the answer is “both/and,” which means we are facing a likely stalemate in which platforms and brands both have value and, despite their natural antagonism, will have to learn to happily co-exist (just like I’m certain will happen any day between red and blue America). Unfortunately, unlike the tiny political divide in our country, the current competitive and philosophical divide between traditional media companies and Silicon Valley will not be settled anytime soon.

One final word of advice: Any time anyone (including me) tells you that the world will be a perfect place and that you will finally be free, if only you will vote for him, embrace his platform or revere his brand, be very skeptical. In my experience, The Who got it exactly right when they sang, “Meet the new boss, same as the old boss.”