Magic Tuesday might be the coolest industry gathering you’ve never heard of.

The brainchild of Danny Samit, director of current series at FX, the event is an almost weekly outing at the exclusive Magic Castle in Hollywood where the exec invites a handful of industry VIPs for a night of cocktails, food and magic, and, perhaps shockingly, very little business talk. Instead, focus stays on the setting and the illusions. Not only does Samit guide the smallish group (anywhere from 5-10 weekly with more than 200 attending to date) through the castle and in front of various performers, he typically ends the night as the star performer with a personal set of tricks.

“No one knows who is coming until they arrive,” Samit explains of who gets on the list, a trick that only adds to the appeal. So far, he’s hosted executives from Fox Broadcasting Company, FX, HBO, Netflix, Hulu, Amazon, Showtime, Starz, AMC, NBC, TBS, Funny or Die, Annapurna, Paramount TV, Gaumont, Valhalla, Electric Dynamite, eOne, The Weinstein Co., 3 Arts and Nerdist, along with all the major agencies.

Others who have made the trip to the castle include talent from Atlanta, Man Seeking Woman, Legion, Rick+Morty, This Is Us, Bob’s Burgers, Last Man on Earth, Jessica Jones, Jimmy Kimmel Live!, Bates Motel, One Day at a Time and Luke Cage. Samit tells THR that Magic Tuesdays grew organically over the past year after he kicked it off in the summer of 2016. He first invited industry peers and colleagues to the Castle for drinks. Then, he found himself performing tricks on the set of shows he covers for FX, series like Atlanta, Legion and The Strain. Eventually he combined the two, mixing up groups of writers, directors, producers, agents, executives and actors and … alakazam! Magic Tuesdays was born.

Suzanna Makkos, executive vp comedy development programming at Fox Broadcasting Company, tells THR that the close-up magic room is one of the most unique L.A. experiences. “It goes without saying that Danny is a fantastic host, he loves the castle and loves watching people experience it for the first time. As for his magic skills, all I can say is that I brought my parents back with him a few months ago and he did a trick so amazing that my dad almost had a heart attack and still talks about it to this day,” she says.

Starz’s Ken Segna, senior vp original programming, jokes that the experience has ruined typical work drinks. “There sadly usually isn’t a show alongside a discussion of our development targets,” he quips. His favorite part? Seeing Samit work his magic, especially in the face of resistance in the form of a female heckler. “Danny didn’t miss a beat — he asked her down to the front and had her assist him performing one of the most impressive tricks we saw that night,” Segna recalls. “Not only was it a great trick, but he won over the biggest skeptic in the room.”

Samit tells THR that he’s been in love with magic since he was a little kid. Both his father, Jay, and brother, Benji, are magicians and members of the Magic Castle. “My dad raised us to love magic,” says Samit, 31. As for his specialties, Samit says it’s mostly close-up magic with card tricks and mentalism. He has tailored his act to his TV career, and the set typically kicks off with a trick using a stack of FX business cards. The rest should be a secret best revealed at show time. 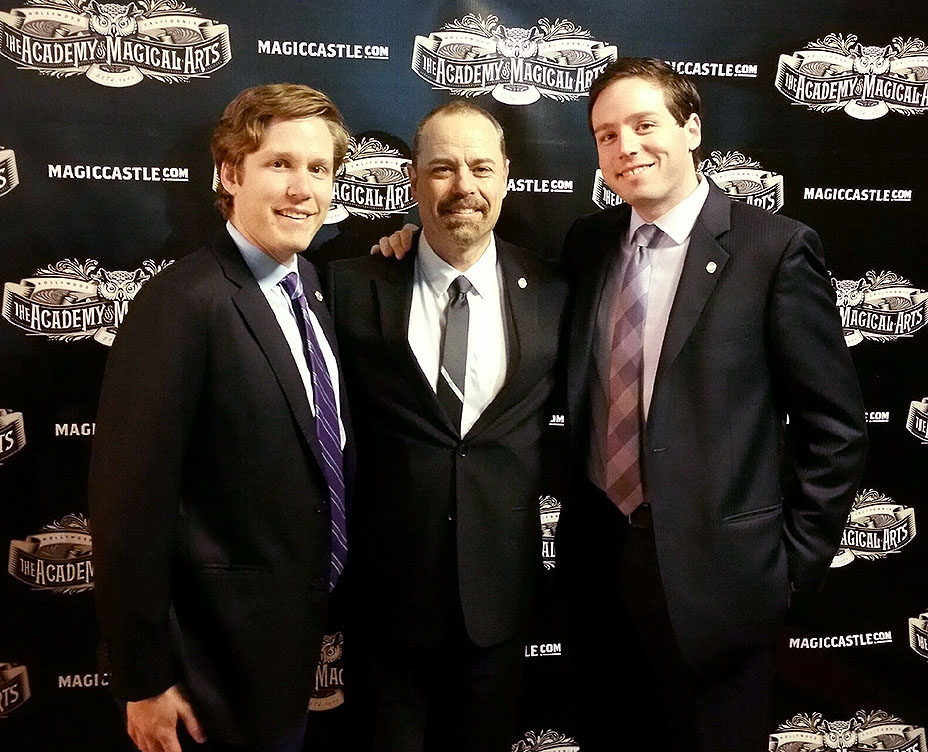 “I love my job, I love FX, and everyone in the industry loves making TV. This is more of an opportunity to step out of the day-to-day and see some magic,” he says. “My favorite thing as a magician is to see that moment when someone is amazed by something, the moment that strikes them and they ask, ‘How did that happen?’ “

Just don’t expect him to ever lift the veil, says Josh Halloway, a writer on Kimmel.

“No matter how many times you ask him how he does something, he will just smile and say, ‘magic,’ ” Halloway says. “He’s creative, funny, very personable, a real showman. Danny is hands down the best television executive that I’ve ever seen perform close-up magic.”

Samit has even been known to put on a black top hat, which was a 30th birthday gift from Peter Rice, chairman and CEO of Fox Networks Group.

“First of all, it’s a great excuse to put on a suit and drink multiple martinis on a Tuesday night. It’s also a great way to really get to know execs and writers that you’ve maybe met once or twice in a totally unique environment,” notes Isaac Aptaker, This Is Us co-showrunner, who got to be an audience volunteer during Samit’s performance at the end of the night. “Watching a magician in a tuxedo pull doves out of a folded up newspaper in a giant castle overlooking Hollywood is pretty much the exact opposite of having a general over salads at La Scala. Highly recommended if you get the invite.”