Sophie Turner made her professional acting debut as Sansa Stark on HBO’s Game of Thrones back in 2010, when she was just 14 years old. With the series’ May 19 finale, the 23-year-old actress’ character secured her rule in the North, and Turner closed this chapter in her career (she’ll soon appear in the next X-Men installment, Dark Phoenix).

Turner spoke to THR soon after the finale aired about Sansa’s royal ending, her tear-filled final day and why she’s ready to say goodbye to Westeros forever — even if some Stark lessons will stay with her.

What were your thoughts when you first learned how Game of Thrones would end?

I liked that Jon [Kit Harington] had to be the one to kill Daenerys [Emilia Clarke]. Overall, I liked it. The thing is that for 10 years, everyone had an idea in their heads of what it was going to be and what they’d like it to be, and it’s never going to be that thing. It’s always going to be something that people don’t expect. For me, I loved it, especially because of the way Sansa finished. It just felt like it was what her character deserved and wanted and needed all those years. She ended up in the place. She was always supposed to be in Winterfell, at home, and she’s incredibly capable of ruling over there. It just felt right for her.

What do you remember about filming the final scene for Sansa, in which she becomes the Queen in the North?

That was one of the first things I shot. It was a great way to begin. But it was strange because I didn’t feel that sentimental when I was doing it, since it was just the beginning of season eight. I was thinking, “We’ve still got 10 months more to shoot.” (Laughs.) But it felt really empowering, and it was a great way to start off the season, knowing that Sansa was going to be Queen in the North, and then owning that. It helped with shooting all the scenes with Dany where she’s very much protecting her home. Winterfell felt more like it was mine than ever. So I became even more defensive in those scenes with Dany.

How was it to share such intense scenes with Emilia Clarke, after so many years knowing one another but never working together?

It was really fun. I had been desperate to work with Emilia for a while. You see her onscreen, and it was strange because I’d never really, maybe once or twice, seen her in costume as Daenerys. So that was like a fan moment! It was awesome, these two incredibly powerful women who’ve gone through so much in their lives and come out the other side stronger. Having them face off against each other was just amazing, because these women are stubborn as hell, and they won’t back down. So it was always going to be very, very interesting to see how they interacted with one another. I know that if Dany had different intentions or if things went differently, then they would be probably friends in another world, in another time. I know that they would empower each other. But unfortunately, that wasn’t the case. 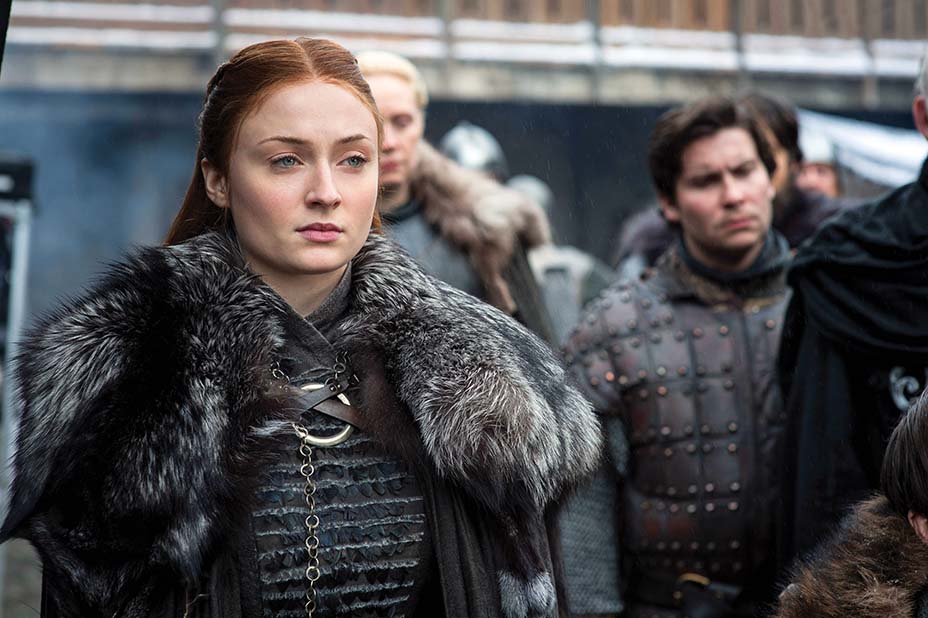 What do you remember about your last day on set?

My last day was the scene where we all decide to name Bran [Isaac Hempstead Wright] as king. We were in Spain, it was something like a five- or six-day shoot, a ton of characters, and it was boiling hot. I just remember being incredibly conflicted and being like, “I might faint, so I would like to wrap, but I also never want to wrap. I want to keep doing the scenes for the rest of my life.” Once every setup finished, I would start crying because I thought it was the end, and then they would be like, “All right, turning around.” And I’d be like, “Oh, fuck, we’ve got five more setups to go,” so I’d have to reel it back in and compose myself. (Laughs.) I loved the fact that my last line in the whole series was, “The North will remain an independent kingdom as it was for thousands of years.”

This is also the scene in which Sansa dresses down Edmure (Tobias Menzie), when he tries to make a play to become the king: “Uncle, sit down.” It’s the first real moment of levity in the finale, which is otherwise such an intense episode.

Oh, totally. When I first read that line, I thought it was hilarious. I loved it, and it got such a great response from all of the fans. It was just great. The whole series has been everyone vying for this throne and trying and trying and trying, and doing everything they can in so many wars and against so many people. He was someone who really could have held a claim to being king years ago, and Sansa just shut that down quickly. It’s like, “Uncle, you haven’t been here for any of this. You don’t even get a chance.”

When did it hit you that Game of Thrones was really over? Was it while you were filming those final scenes in Spain? After the finale aired?

Well, I don’t know if it has hit me yet. I haven’t watched the last episode because I would’ve been alone watching it, and I can’t do that. So I think it’ll probably hit me when I watch the final episode myself. But I can’t do that right now, and I don’t really want to. I don’t want it to be over, but the fact of the matter is that it is, and I’ve just got to watch it.

What do you say to people who think Sansa should have become queen of the Seven Kingdoms?

The finale ends with the futures of so many characters wide open, Sansa included. Would you ever play Sansa again?

No. It’s time for me to say goodbye. She’s ended up in a place that I’m so happy with. I don’t know. It would be different if someone actually came and said, “We want to do a Sansa spinoff show,” but I’m pretty sure I’d say no. It’s been 10 years of watching this character grow, and she’s at her peak right now. I’m sure if she carried on and did a spinoff show, it would just be downhill from there. She’d have to go through some other terrible traumas or something, and I don’t want to do that.

Are there elements of Sansa you will bring forward with you in your career, or have you put her away?

I haven’t put her away at all. It’s her resilience and her strength that I’m going to carry with me. I’ve never felt more empowered as a character than I have with Sansa. I think she’ll stay with me for the rest of my life. All my formative years were spent playing Sansa. I think even if I tried, I couldn’t shake her off.

'Game of Thrones': What a Sequel Could Look Like