You have to hand it to the producers of Gary: A Sequel to Titus Andronicus: They have guts. The latest work from acclaimed playwright Taylor Mac wouldn’t seem the likeliest of hits in a Broadway environment littered with children’s shows and presold properties, even if it does star three-time Tony winner Nathan Lane. But that hasn’t dissuaded the intrepid group from presenting this no-holds-barred raunchfest, a “sequel” to one of Shakespeare’s lesser-known and -regarded tragedies, featuring a plethora of scatological gags revolving around bodily fluids and gas escaping from corpses.

It would be a pleasure to report that the gamble has paid off, at least creatively. Unfortunately, despite the tremendous abundance of talent both onstage and off, the production is mainly notable for being the most batshit-crazy thing to be seen on Broadway in many a moon.

Despite the play’s subtitle, you don’t really have to bone up on its inspiration beforehand, although it will help you appreciate some of the throwaway jokes and references. All you need to know is that Shakespeare’s play about a murderous Roman general concludes with a bloody banquet-room massacre that makes the Red Wedding on Game of Thrones seem tame by comparison. 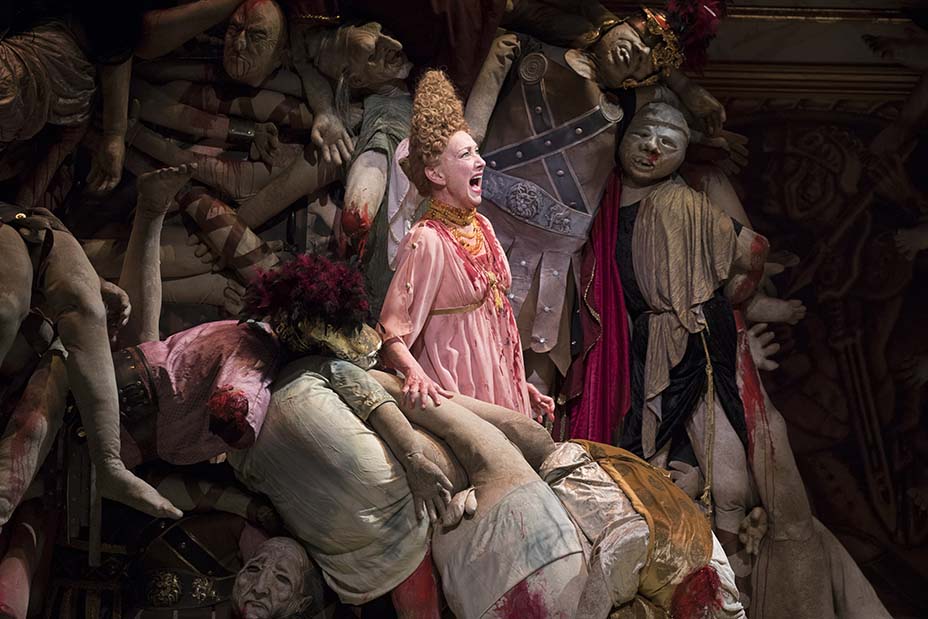 The aftermath of that carnage is on ample display in Santo Loquasto’s hilariously lavish set dominated by a giant mound of male corpses. Arriving to clean up the mess are Gary (Lane), a clown who has been promoted to “maid” for the occasion but who aspires to the role of Fool, and an experienced servant, Janice (Kristine Nielsen, a last-minute replacement for Andrea Martin, who was injured during rehearsals). Literally popping up at times is Carol (Julie White), a nurse who had a pivotal role in the previous goings-on and was wrongfully thought to be dead.

It’s a big job, and a disgusting one at that. The experienced Janice instructs Gary on exactly how to manipulate the bodies so that gas can escape from their orifices (Dan Moses Schreier’s gleeful, whoopie cushion-style sound design allows us to hear every emission in all its amplified glory). She also shows him how to siphon out the corpses’ fluids, a task accompanied by no small amount of risk if you suck on the wrong tube.

That pretty much describes the plot of the piece, which strains for existential vaudeville but mainly comes across as an attenuated and increasingly tiresome sketch. To be sure, there are plenty of laughs, at least for a while, which is not surprising considering the expert farceurs onstage. 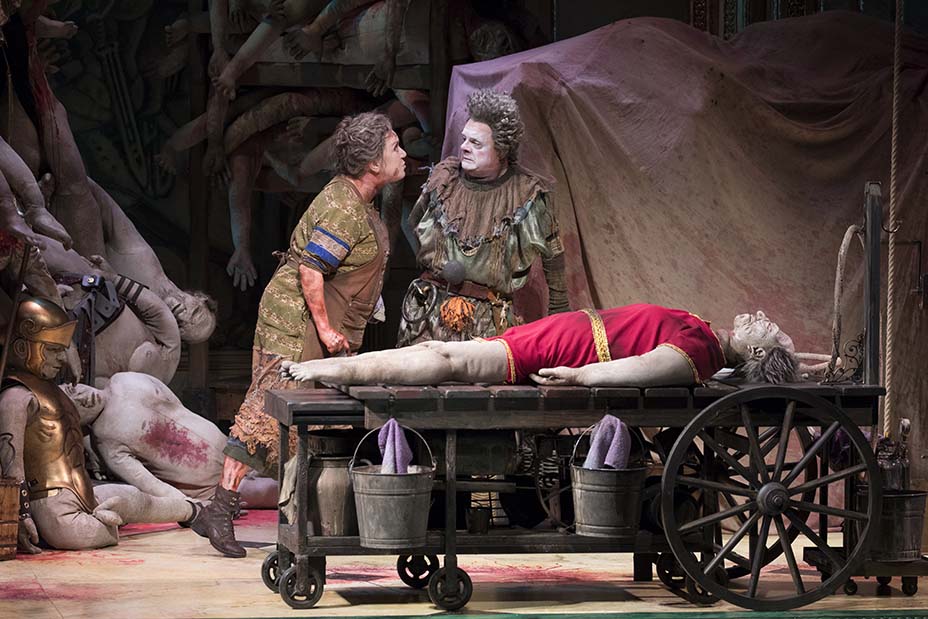 All three actors deliver virtuosic comic performances, although why they are speaking in cockney accents is a mystery. Lane, decked out in a fright wig and pancake makeup, seems to have been genetically designed for this sort of clowning; he makes the most of his character’s every encounter with a cadaver’s erect penis or severed body part. Nielsen (who shone in the playwright’s absurdist family drama Hir) similarly makes an art of comic exasperation. And White is a delight as the guilt-ridden nurse who makes her first appearance with geysers of blood spewing out of her neck.

But the cast’s highly physical efforts (aided by Bill Irwin, credited in the program with “Movement”) can only go so far in propping up this flimsy farce with pretensions. Intermixed with the elaborate shenanigans, including a chorus line of dead Roman soldiers with dangling erections, are pseudo-philosophical speeches about societal power imbalances, how the little people are so often forced (literally in this case) to clean up after the bigwigs and the transformative power of art. Gary’s repeated expressions of his desire to “save the world” might have been poignant in their futility if we had any emotional connection to the character. But we don’t.

Director George C. Wolfe demonstrates here that farce isn’t his strong suit; despite the near-constant physical shtick, the proceedings feel much longer than their 95 minutes. It’s clear that no expense has been spared on the production, which even features original, if unmemorable, music by no less an esteemed composer than Danny Elfman. But for all the heavyweight talents involved, this labored effort from Mac, a recipient of the MacArthur “Genius Grant” and a Pulitzer Prize finalist for the epic performance piece A 24-Decade History of Popular Music, has little more substance than the gas frequently emitted onstage.