“John Moody’s column does not reflect the views or values of FOX News and has been removed,” the network said in a statement to The Hollywood Reporter on Friday afternoon.

Objecting to an effort to attract more diverse U.S. Olympians for the Winter games, Moody had written on Wednesday: “Unless it’s changed overnight, the motto of the Olympics, since 1894, has been ‘Faster, Higher, Stronger.’ It appears the U.S. Olympic Committee would like to change that to ‘Darker, Gayer, Different.’ If your goal is to win medals, that won’t work.”

He added, “Complaining that every team isn’t a rainbow of political correctness defeats the purpose of sports, which is competition. At the Olympic level, not everyone is a winner. Not everyone gets a little plastic trophy to take home.”

The response to the piece was shaped in part by Moody’s lofty title. He’s been with Fox News with the beginning, though a network insider cautioned that he has no editorial oversight on any platform. As a result of his status and experience at the network, the column was not put through the proper vetting process, this individual said.

“The executive vice president of Fox News targeted some of our nation’s top athletes with vicious anti-LGBTQ and biased rhetoric at what should be the proudest moment of their lives,” said Sarah Kate Ellis, president and CEO of GLAAD.

She continued: “These athletes are at the Olympics because they already won by qualifying to represent the United States on the world’s stage; and they did so despite facing discrimination from places like Fox News throughout their careers. Moody should not only apologize to the athletes and fans for this disgraceful post, but Fox News should open their site for diverse athletes to share their own personal stories and perspectives.”

Human Rights Campaign senior national press secretary Stephen Peters said the column is “the antithesis of what the Olympics are all about and an affront to the values of hard work and perseverance that Americans share.” He added, “The U.S.O.C. does not have quotas for its Olympic delegation, and to suggest that race, sexuality, or gender orientation are the reasons these incredible athletes made the cut is insulting, repugnant and dismissive of a lifetime of hard work.”

Catherine Sakimura, deputy director of the National Center for Lesbian Rights, said the column’s “racist and homophobic sentiment demeans our U.S. Olympic athletes, who should be celebrated as they represent our country.”

An individual familiar with the company said that Moody played a major role in creating the news division at Fox and was a top lieutenant to late Fox News executive Roger Ailes. The individual said Moody once played a big role in shaping news coverage at the network. 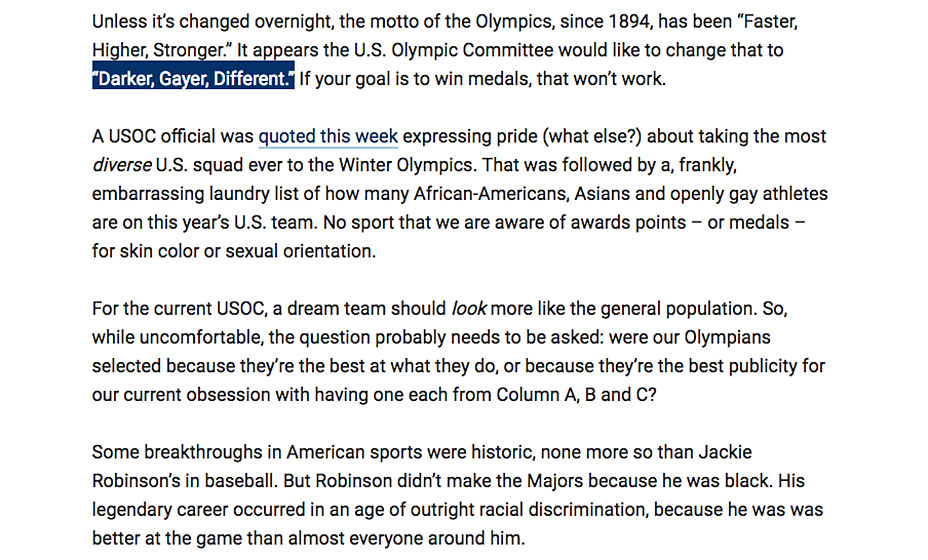 Feb. 9, 10:45 a.m.: The story was updated to include a statement from Fox News and to reflect that the column was removed.